Benjamin bit me! (And that really hurt...and it's still hurting)

Today wasn't all terrible but it was an incredibly frustrating day and I was ready to throw the towel in by dinner time. It was so bad that I eventually shut Benjamin in his bedroom and told him he had to sit there until Daddy got home. And then I messaged Andrew to tell him so. So he decided to come home, which was fair enough since I messaged him at 4:57 PM.

I'll let Miriam fill you in on a few details: Today I didn't have a good day because Benjamin bit me on my thumb, and dad. The second time he got soap in his mouth. The first time he got locked up in his room.

Yup. I'm not quite sure what was up with Benjamin. I mean, when he bit Andrew it was in the middle of family prayer. Benjamin was sitting on Andrew's lap and he—Benjamin!—was the one saying the prayer. In the middle of a sentence he just bent over and bit Andrew's arm. Like, what?!

Let's take a minute to scrutinize Miriam's illustration, shall we? Because I have no words for Benjamin's outlandish behaviour today (except to say that he was such a stinker all day long).

Benjamin has a dinosaur head...or something. I am completely in love with this illustration. 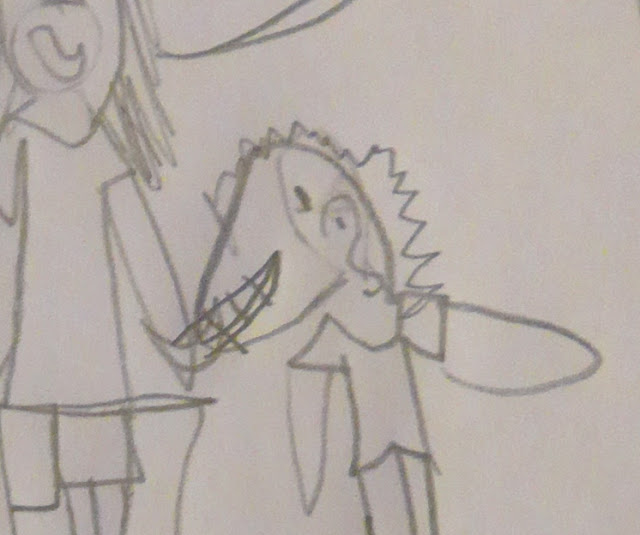 The dinosaur head and my checkerboard teeth (I have three rows of teeth—check it out!) make this picture great. Oh, and the little "emoticon" people floating in our speech bubbles. Did you see those? Mine looks rather livid and Miriam's looks sad.

But there were some great things about today, too.

I took Benjamin and Zoë to school for lunch. Rachel's teacher asked me to organize something called "Book & A Bite," where a parent comes in for lunch and reads a few stories to a small group of students. I hadn't sent out the volunteer form yet so I took the first day...and only one other parent has signed up so hopefully more will soon. It was pretty fun! I got to meet a few of Rachel's friends that I hadn't met before and Benjamin got to practice sitting still.

We tried to visit Miriam in her classroom, too, but she was out at "specials," so we just went home.

Zoë's on this weird nursing strike. She will only nurse (happily) while lying down...like, in bed. So obviously that means I have to be lying down as well and it just...is frustrating. If I try to feed her in the manner that I'd consider "normal" (you know, me sitting in a chair holding her) she freaks out and screams and refuses to eat. It's a bit ridiculous. And it means we can't leave the house for too long because baby's got to eat!

The big girls did their chores and played nicely after school, so besides the time Benjamin bit Miriam's thumb for no reason, and if you ignored all of Zoë's screaming and Benjamin's other craziness, it was a pleasant afternoon. And then we had a good time at soccer (for Rachel and Daddy) and playing on the playground (for the rest of us) after dinner and even had a pleasant time getting ready for bed...until Benjamin bit Daddy for no reason.