I was going to take the kids hiking on my own today, at least that was the plan but Miriam had this list of fourteen "Monday Chores" she wanted to get done and who can argue with that. We started out the morning making beds, unloading the dishwasher, and picking up sticks in the yard.

Zoë decided she was starving so I skipped most of the stick picking up so that I could feed her, but I told the kids to leave the poison ivy alone while I was feeding the baby, and that I would take care of it when I came back out. Most of our poison ivy is in the back-back yard—behind the fence and in the woods—but we'll occasionally get sprigs of it popping up in the front yard (thanks a lot berry-eating birds for pooping poison ivy seeds in our yard) and I recently noticed a young ivy plant by our front walkway.

I came outside from feeding Zoë, armed with plastic grocery bags, ready to dispose of the plant myself, and was horrified when I looked down to see poison ivy leaves scattered across the front walk.

"What were you thinking?!" I asked. "There's poison ivy everywhere! This is going to be fifty times harder to clean up than if I could've just yanked one poison ivy plant out of the ground!"

"I was trying to take care of it," she said.

Rachel shook her head. "I just whacked it with a stick," she said.

"Gah!" I said. "Rachel! I said not to touch it—that meant at all! The oils in the plant leak out when it is disturbed. Now there are oils on the stick and who knows where else!"

She was pretty sullen about it. I got more plastic bags to use for gloves to pick up the leaves and pull the plant out of the ground. I hope I got everything. And I hope no oil got on anyone. So far, so good. I guess we'll see how everyone's looking in the morning.

We still weren't very far into our stick-picking-up project when Alexa came over to play with the kids, so I let them play. It's their holiday, after all, and goodness knows it's easier for me when Alexa's entertaining them all. Alexa is eleven (and is probably one of my favourite people in the world because she comes over to play with my kids). They played "chalk house" for a few hours before coming in for lunch ("chalk house" is where they draw a bird's-eye view of a house (like a blueprint, I guess) all over the street and then designate rooms for this and that—the library, the family room, the kitchen, bedrooms, and so forth—and then decorate each space with furniture and then play house...in the middle of the street...because that's safe (good thing we live on a cul-de-sac)).

After a while I called them in for lunch. And then Zoë was having such a good nap that I decided to have a nap, too, so the kids turned on Robin Hood and watched that, and drew pictures of the characters, and played sword fighting all at the same time. It wasn't exactly a quiet nap time but I think I fell asleep for about twenty minutes in spite of it all.

Here's one of Miriam's pictures:


Zoë was still sleeping when I woke up so I did a few more chores while she slept, like changing the air filter, a chore that was seriously overdue! We had dust accumulating on the grate in front of the filter because the filter was completely full of dust. I pulled out the old filter, popped in the new one, and then said, "I'm going to go grab a duster. No one touch this!"

I walked to the hall closet and came back to the living room to find both Miriam and Benjamin rubbing their hands (and feet!) on the filter. Our house is not big. I was gone for maybe thirty seconds.

"Ack! Guys! What are you doing?! Stop that!" I wailed, watching little dust bunnies break free from the filter.

"What is this stuff?" Miriam asked.

"Really? You really didn't hear me? You were right there when I put this down and said 'Don't touch this!'"

Miriam thought the whole situation was entirely unfair. She ran to her bed to sulk, only coming out to glare at me every now and then (because it was all my fault she got in trouble (and by 'in trouble' I mean I raised my voice)). She probably would have sulked the entire afternoon away except that Sister Rider dropped off a balance bike for the kids to try out and the excitement of that cancelled out all her negativity in a snap. And ate up the rest of the afternoon.

By the time the kids were finished playing and started asking about the hike we'd talked about over breakfast it was nearly 4:00 so I told them that, at this point, we were just going to wait for Daddy to come home so he could go hiking with us. So that's what we did. We waited for Daddy and then made sandwiches and headed to Eno River State Park.

Benjamin's pants got all scrunched up in the car and when he hopped out he looked like a little baseball player. 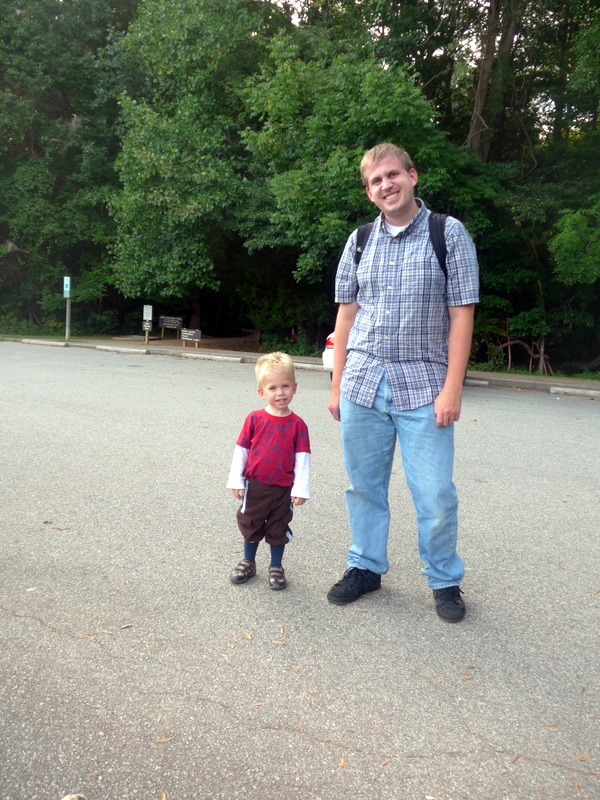 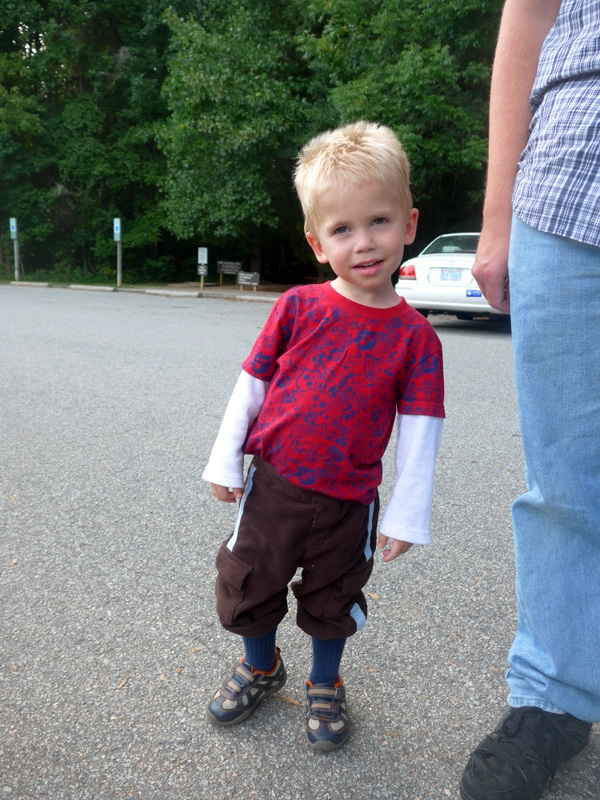 The kids were excited when we saw a green snake soon after getting on the trail. It was just a little baby one: 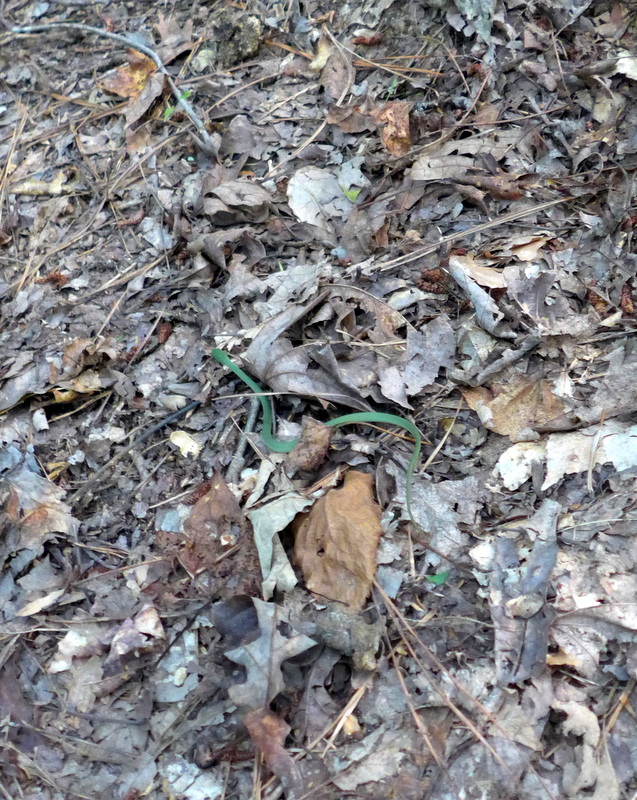 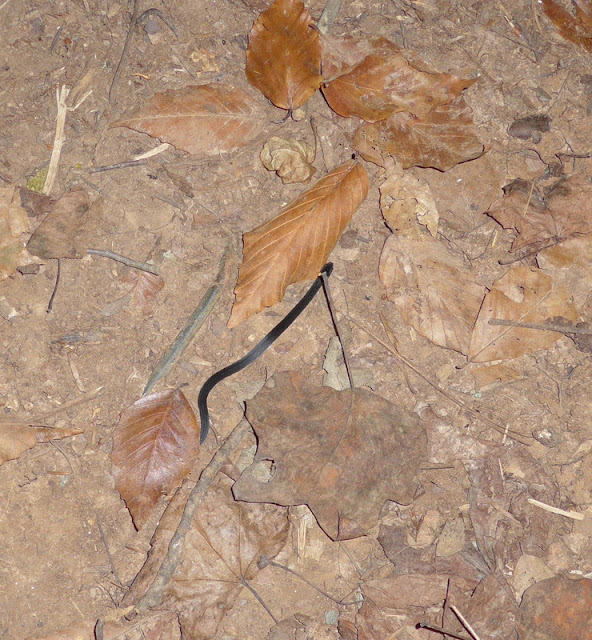 I guess I could've let the kids try to catch them but I wasn't sure what kind they were, so we just took pictures. Turns out they're both harmless species. Benjamin did try to catch a big millipede.

We made it to the footbridge and I read the sign, reminding hikers that Hurricane Fran rose to "this level" on September 6, 1996 and I remembered that we'd just missed the anniversary of the hurricane the first time we went on this hike in 2012 (you can ignore the part where I said we resolved to become frequent visitors because I think this was our third hike there in as many years).

Andrew was talking about how we'd brought a stroller with us our first time—for Benjamin—and I said, "No, no. I distinctly remember that I had Benjamin in the front carrier!" But Andrew was adamant that we'd brought the stroller. And then it hit us: Miriam was two when we first hiked this. We'd brought the stroller for her (dummies we were; this is not a good hike for a stroller, although it starts out paved). Crazy to think about. But we really should go more often because it's a fun little hike!

Perhaps we'll make it to the bridge on September 6th next year (since that will be the 20th anniversary of the hurricane). Who knows? I'm not very good with anniversaries.

Anyway, here are our kids on the bridge—and, my, how they've grown! (I shouldn't have looked back at that 2012 post...where did my babies go?) 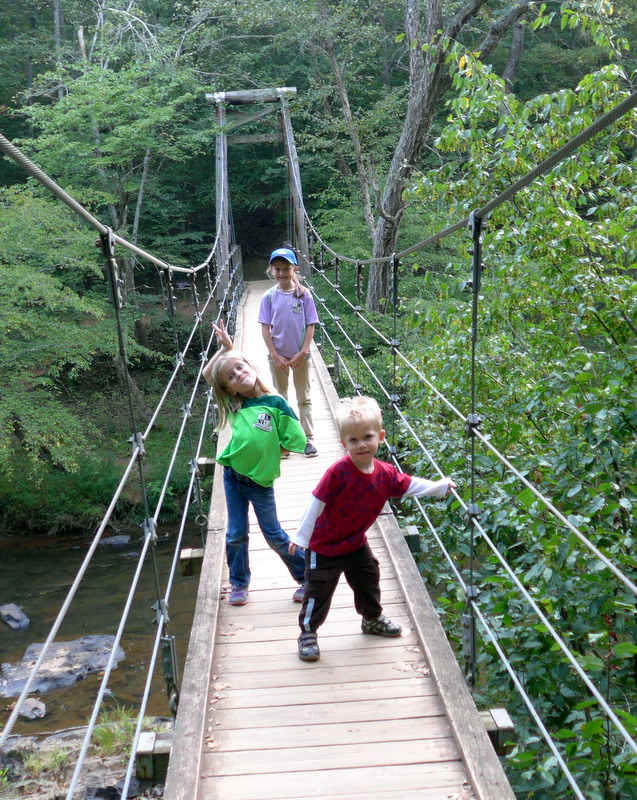 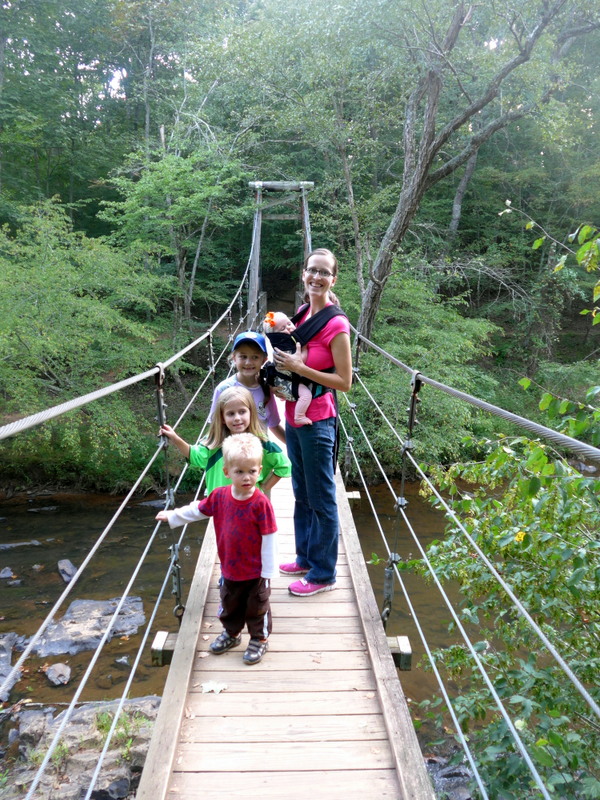 We hiked down to the river and ate our picnic dinner on the rocks, which the kids thought was pretty neat. Benjamin dropped a pickle slice into the river (it fell right out of his sandwich) and all these little fish swam up and gobbled it right up. 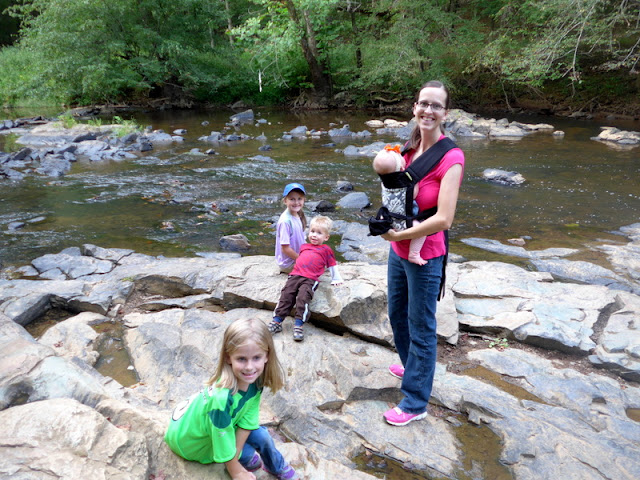 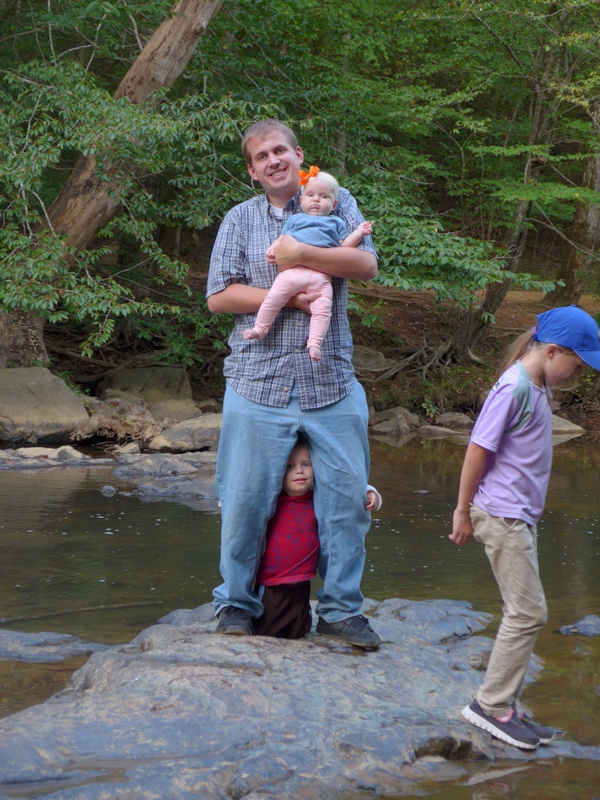 Here are the kids goofing off on the rocks: 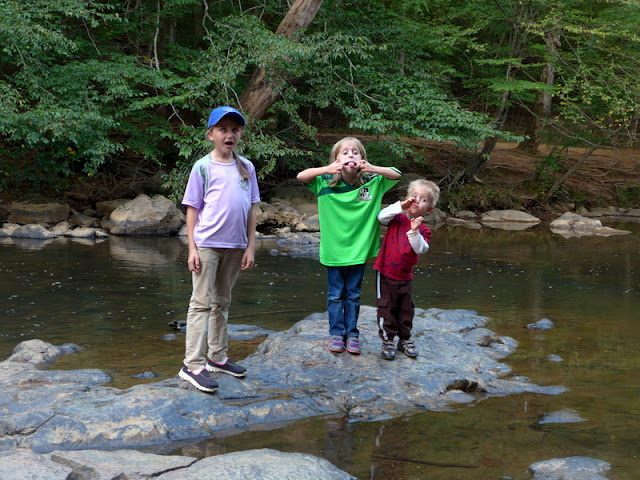 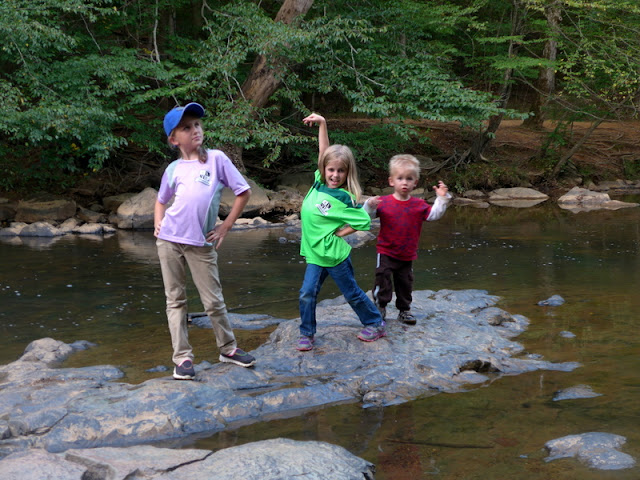 They weren't ready to head home after dinner; they wanted to do more hiking. So we did.

We walked past the bridge to get on the trail and Andrew told Rachel to hang on the wires, but she couldn't quite understand how she was supposed to do it, so I showed her. 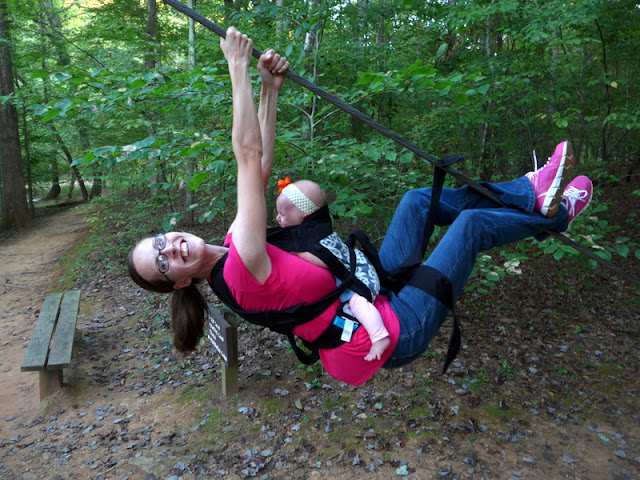 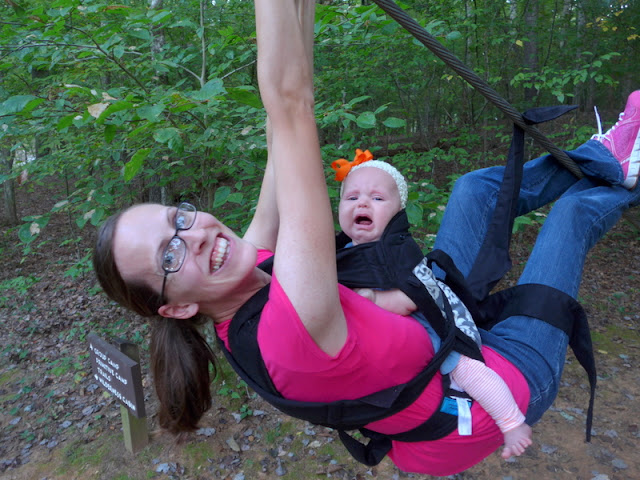 We stopped by the "Wilderness Cabin" and also checked out the campsites, resolving never to camp here (the bathrooms and parking lot are, like, a ten minute hike away—and we're wimps (camping with babies will do that to you)! We're not going to cart all the kids and our stuff that far (nor are we going to drag our kids that far to use the toilet in the middle of the night)). 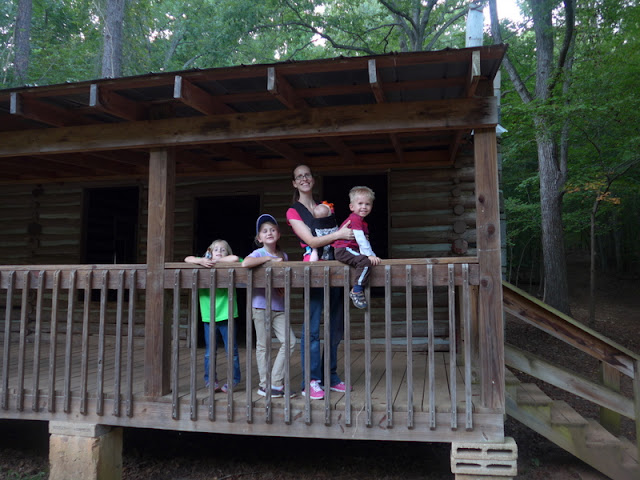 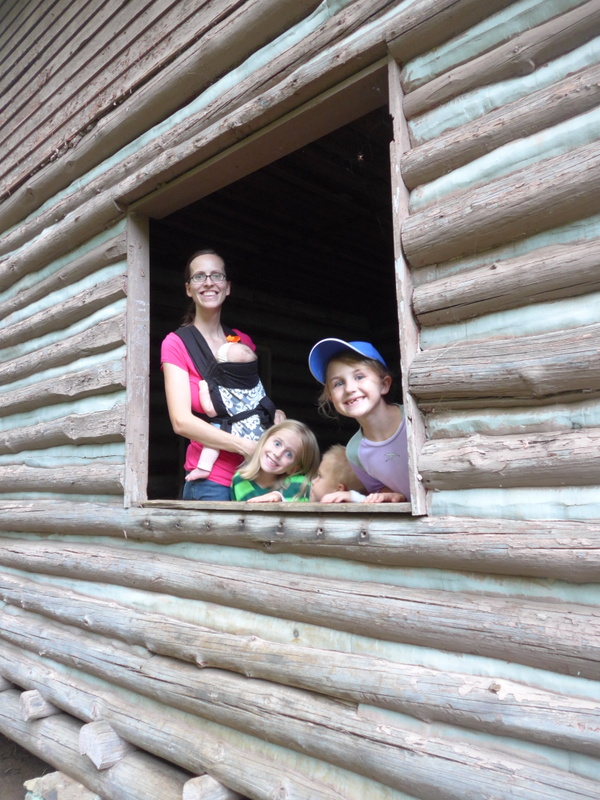 Benjamin was so tired on the way back he kept saying, "My body's zombie!" He wasn't too tired to lead the way, however, and lead the way he did!

Benjamin led us all the way to the bridge, what a good trailblazer! 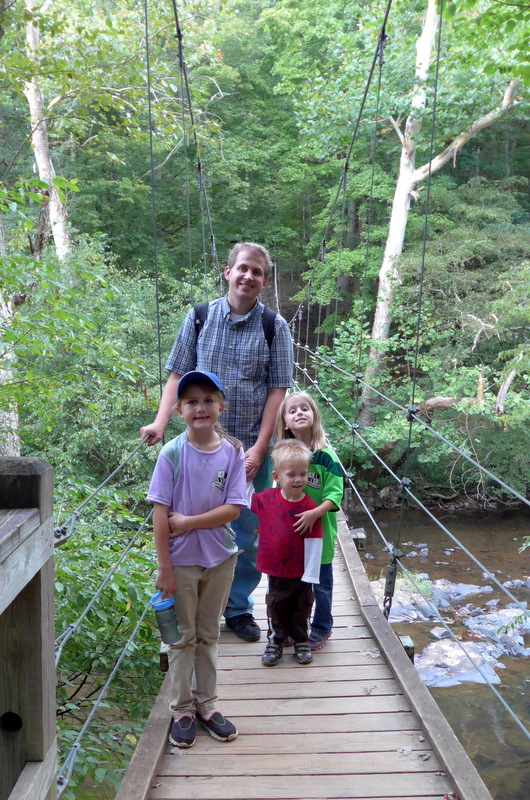 I had to stop and take a picture of me carrying Zoë here:

I was trying to duplicate the picture from Benjamin in 2012:

It's just about in the same spot, though I guess we should have hiked down below the trees; I couldn't quite remember what we'd done. It's hard to believe we've been here for three years—in the same house the whole time. Zoë is the age Benjamin was when we moved here. And we're still in the same place, doing the same thing. That's never happened to us before! Look at us, being all stable and stuff.

Three years in the same place, quite an accomplishment.
Posted by Nancy at 11:30 PM