We had a coupon for Corn Flakes so we got some. I don't know why we don't usually get corn flakes, but we don't. Cheerios, yes. Chex, yes. Corn Flakes, no.

We used to though. We lived off corn flakes when we lived in Jordan. It was a sad, sad day when the war in Lebanon cut off the import of said corn flakes to Jordan. I don't remember what we ate for breakfast when—get this—the entire country ran out of corn flakes. We probably had to make oatmeal or toast or something. War is a terrible thing. And all I've experience firsthand is a lack of corn flakes. Sometimes I try to imagine how hard it would be to lose, like, my family or my entire house but that's hard to do because I've lived such a blessed life that just knowing that an entire country can run out of corn flakes kind of breaks my brain.

When we lived in Egypt we, again, survived on corn flakes for breakfast. It's the only decent cereal Temmy's makes (in my opinion). We tried other stuff, like Bran Stars, but, uh...no thanks. The Rice Krispie knock-off was pretty good, too. Rachel always called that "Rabbit Cereal" because there was a rabbit on the box. Naturally, the corn flakes knock-off had a rooster on the box, so Rachel called it "Chicken Cereal."

Sometimes we still do call it chicken cereal.

Once we got a Temmy's Corn Flakes bowl with one of our boxes of corn flakes. It has been a favourite in our house for years but its status is elevated whenever there are actually corn flakes in the house—for obvious reasons.


Apparently when the corn flakes were put in the cart yesterday Benjamin called dibs on the Temmy's bowl, but nobody knew this except for Andrew because Benjamin was being his shopping buddy and everyone else was at home.

So this morning when we woke the kids up (early, again) Miriam, the first one to actually be up, rifled through the cereal boxes and found the corn flakes, got out the Temmy's bowl, and poured herself some breakfast.

Benjamin came out of his room, walked across the living room, and started screaming his head off.

This was no ordinary tantrum.

He was shaking with rage, his little lips were turning purple, he was spitting out nonsensical syllables.

"Breathe, little buddy," I coaxed. "Use your words."

"Mimi has the chicken bowl!" he howled.

"I want the chicken bowl!" he screamed.

"I want the chicken bowl!" he screamed again and then he ran into our bedroom to see if Daddy would fix it. Eventually Andrew walked back out, carrying Benjamin, who was subdued but certainly not happy.

"Benjamin decided at the grocery store that he wanted the chicken bowl this morning," Andrew explained.

"But Miriam didn't know this?" I asked.

"No one knew this but me," Andrew confirmed.

"Okay, okay," I began negotiating, talking him down from the ledge he was on. "How about you wait for Miriam to finish eating—she's almost done—and then you can use the chicken bowl?"

So Miriam and Benjamin ate breakfast in shifts. As soon as Miriam was finished eating she picked up her spoon and dropped it into the sink and Benjamin slid into her spot and poured himself a bowl of corn flakes. 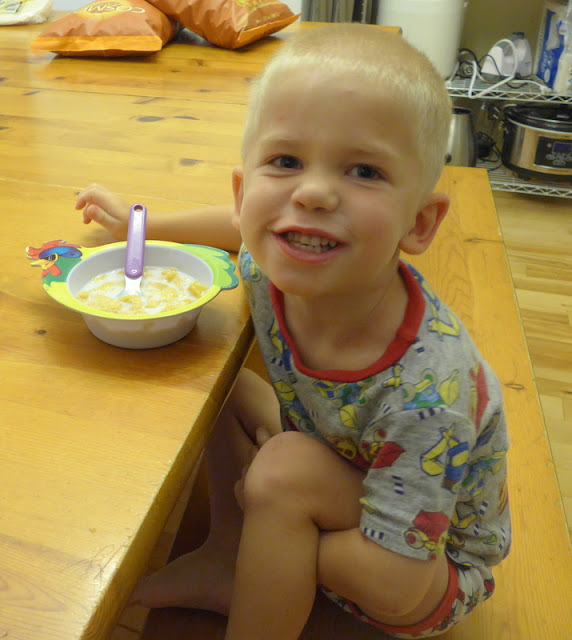 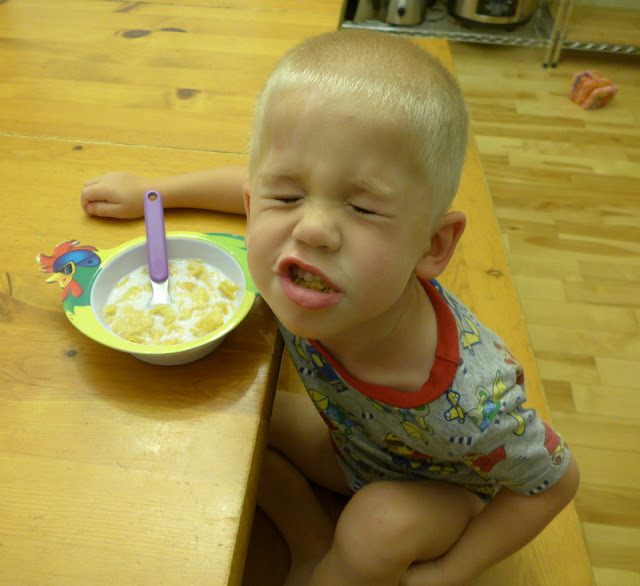 Oh, and Rachel put the milk away here: 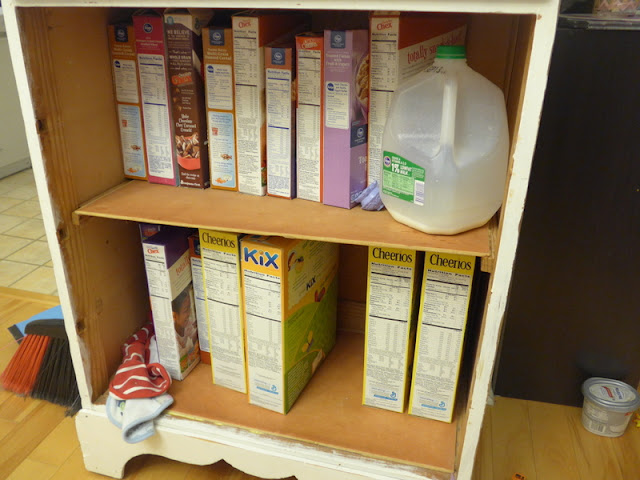 It was just one of those mornings.

You know it's been a rough weekend when getting up for school feels like sleeping in...
Posted by Nancy at 12:02 AM