We cleaned the church from 8:00 until 9:40 and then we started setting up for Trading Tables. We didn't quite have the tables and signs up when people started showing up, but everyone who showed up pitched in to help and we got things done.

I felt like this was a pretty busy Trading Tables for us:

In addition, the girls sat at a table asking for change to fund our package to Jordan (for Syrian refugees). They were quite grumpy about this, even though they'd known since the day before that their job was going to be sitting at the table explaining the project to curious people. They ended up taking turns manning the table and by the end of the hour had collected $19.77!

That's about enough to send one box, so hopefully I can fit all the stuff we collected in one box. We collected five baby carriers and some blankets and things to send. It's a small thing, but just think how much good we could do in the world if we each did one small thing every day.

I recently read (and loved) a conference talk by Elder Holland, where he says, "having set our 'hand to the plough,'* we will never look back until this work is finished and love of God and neighbor rules the world."

If we're only moving the plough an inch at a time at least the plough is moving!

I was also happy when a woman from "the church next door"** arrived to collect things for one of the homeless families their church is sponsoring. It was helpful to have her take a carload of stuff away and it was nice to know it was going straight to people who need it.

Clean up went relatively fast even though not many people were able to stay and help. The family from the "other" church helped get everything bagged up and carted outside; a woman from another ward stayed and offered to take a load of stuff to the Durham Rescue Mission (which was awesome because we couldn't have managed everything in our van); and the sister missionaries came to help pack things up as well. They even told us to take off once we got our van loaded up, assuring me that they'd vacuum the cultural hall and lock the building up (they knew we had a soccer game to get to).

Those missionaries sure are great! If you have a problem, just "ask the missionaries! They can help you!" Even if it's just vacuuming the floor so you can get to soccer on time...which we did!

We dropped stuff off at the rescue mission (and then went through the drive-thru at McDonald's (desperate times, folks)) and ended up with just enough time to drop Zoë and I off at home before carting everyone else off to soccer.

But that's okay because there's always next week's game. 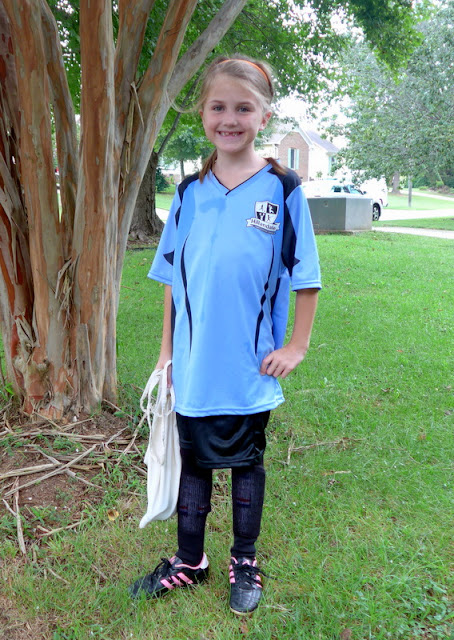 Zoë and I both took a nap and woke up with colds. Ugh.

Andrew was a powerhouse and dealt with grumpy Miriam and Benjamin while being co-coach. Then he dropped the girls off at home (and Zoë and I kept sleeping because apparently we're sick) where they had quiet reading time in their bedroom (but apparently were also having quiet fighting time) while Benjamin got to be Daddy's "shopping buddy."

They went to Costco, came home, and started getting Rachel ready for a birthday party.

I woke up when she couldn't find her goggles.

(Did I mention our children woke up early and were super grumpy today?)

Andrew drove her (and Benjamin) to our pool where she found her goggles in the lost and found (for the second or third time this summer, lucky duck (and honest neighbours)). Then Andrew chauffeured her to her friend's pool and took Benjamin Krogering.

Miriam at some point put herself down for a nap and woke up while Andrew and Benjamin were out shopping the second time.

We went for a walk.

Andrew chopped up an entire (Costco-sized) bag of onions to put in the freezer.

I changed a million diapers and bathed all the kids and did story time.

Then we put the kids to bed, Andrew picked Rachel up from the birthday party, we put her to bed, then Andrew worked and I pumped and got Zoë to sleep. And now I'm blogging (obviously).

It was a long and tiring Saturday, that's for sure!

** There is literally a church right next door to our church. When we moved to Utah we would joke about having a chapel on every street corner. Sometimes there would be two church buildings right beside each other (no joke). But they were all The Church of Jesus Christ of Latter-day Saints. Down here there's a church on nearly every street corner, too, but they're all different!
Posted by Nancy at 11:57 PM