How Miriam got to grade one

We considered getting her tested for "early entrance" to kindergarten but that testing would have had to come out of our own pocket and it wasn't cheap, so instead we kept her home, doing her own thing, and going to Miss Annie's preschool one morning a week for fun. She hated knowing that all her little friends were off to kindergarten and she was stuck at home, though I think we enjoyed each other's company for that "extra" year.

I don't think it was coming from the teacher, really, but from the students.

Anyway, the girls were in soccer last spring and so was one of Rachel's friends from grade one, who I knew had been moved up from kindergarten. I spoke with his mom about how that worked for them, but she openly discouraged me from trying when she found out Miriam wasn't at an all-day, prestigious preschool (because apparently prestigious preschools exist). I had a few other people try to dissuade me (a friend who's a kindergarten teacher and thinks that foundation is invaluable) but almost everyone who knows Miriam at all was super supportive.

Rachel's grade one teacher came to her baptism, which happened to be on the second day of school, so I spoke with him about it and he said to go for it, with one condition—that Miriam come to his class. That, really, was certainly one of our biggest wishes because Rachel had had such a positive year in his classroom, and Miriam had spent so much time there as well that she knew the environment and everything, but I really had no control over what classroom she'd be assigned to.

So, that week I sent an email to Miriam's teacher asking if we could have Miriam accelerated to grade one. She forwarded it to the principal who forwarded it to the AIG (Academic and Intellectually Gifted...or something) coordinator, who each wrote back to me to explain that their AIG programs would be integrated in the classrooms this year (they used to pull students to do enrichment activities and now they're doing a "differentiated model," so the teachers will have students of different levels working on different projects but no one will really know if they're AIG or not (which I like better to tell the truth)) and that perhaps that would put my mind at rest.

I insisted I still wanted her to be tested, so they said they would.


First she had to do the kindergarten assessment and the mCLASS beginning of the year testing stuff, which her kindergarten teacher administered. Once she finished up with that she was completely on my side. Miriam tested two grades above grade level, so that meant we could move on to the AIG coordinator. She administered the Woodcock-Johnson, which Miriam also did well on (scoring at 99 to 99.9% on everything on the exiting-kindergarten level and between 80 and 99% on the exiting-grade-one level) and she walked us through the Iowa Acceleration Scale.

Still, I didn't know how Miriam had tested because they didn't share the results with me until they called me in for the Big Meeting.

I was so nervous I felt sick.

I'd been feeling like "that mom" the entire school year and I didn't want to come off as annoying. I was worried Miriam wasn't as ahead as I thought. I was afraid I'd have to fight tooth and nail to get her accelerated. I was pretty sure I was going to throw up or something.

Instead I pulled together a business-casual kind of outfit and marched into the school's office like a mama bear, armed with Chapter 5 of A Nation Deceived—all highlighted up and notes written in the margins—ready to make my case.

I sat down in the principal's office with the principal, the AIG coordinator, and Miriam's kindergarten teacher and I didn't have to fight at all. They were completely ready and willing to move Miriam up a grade level. So we spent most of the meeting talking about a transition plan and A Nation Deceived stayed hidden in my purse.

Unfortunately, Miriam wouldn't be assigned to Mr. A's class (I may have dropped his name in a few emails so they knew we were interested in him as a teacher...even though parents can't technically request teachers). His class had 20 students in it and another class only had 17 students in it so it made more sense to put her in there. I agreed, saying I was sure either class would be great, but deep down inside I was a little sad to not get Mr. A.

Last week Miriam started the transition to grade one. She went to kindergarten on Monday because Mrs. X was out of town taking care of her sick mother. She planned to be back on Tuesday, so on Tuesday Miriam went to Mrs. X's class for reading hour and she loved it...but Mrs. X still wasn't there. Her class had a substitute teacher.

"Maybe she'll be back on Wednesday," I told Miriam.

But on Wednesday morning I got a call from the school asking if I'd mind if Miriam were moved to Mr. A's class instead. Mrs. X's mother had passed away and so she wasn't going to be back in her classroom for a couple of weeks. Mr. A wrote a letter to the principal asking to take Miriam on—saying that he felt it would be better for her to transition to a new grade with a permanent teacher rather than with a substitute.

"That sounds reasonable to me," I said as I did a little happy dance.

So Miriam spent the rest of last week transitioning to grade one and I think it was an easier transition that it would have been in the other classroom. Not only does she already know Mr. A, but the new teaching assistant is my friend Suzi (we were room parents together when our girls were in Mr. A's class a couple of years ago), and a little boy from our ward is in her class as well.

Suzi made sure Miriam got a good seat. She messaged me to say that she put her "beside a little boy who's a great writer and some really sweet girls."

When Miriam got home I asked her if Parker was in her class (knowing full well that he was (Andrew teaches his primary class so he's in the know)).

"Not really," she said. "We're at different tables."

So I left it at that until a few minutes later when I got an email form the AIG coordinator with a few pictures of Miriam "in her new environment." 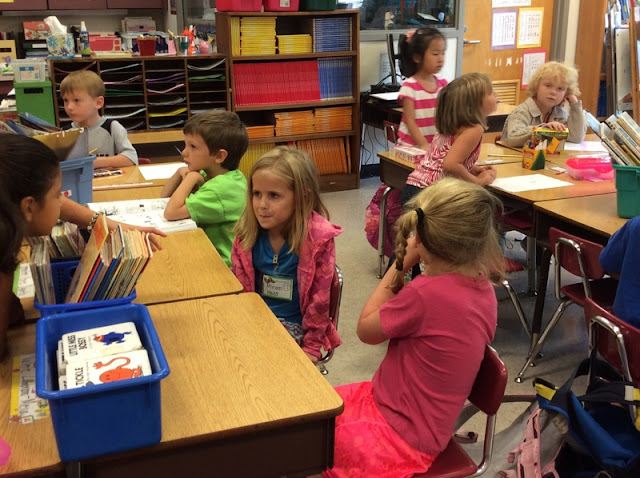 "Miriam!" I said, pointing to the boy next to her. "That's Parker!"

"You are more than sitting by him. You are sitting right beside him."

"I know!" she said, getting quite exasperated. "I don't. See that line between us? Different. Table."

"Miriam, you are sitting next to Parker in this picture."

I suppose I can see her reasoning. Mr. A always divides his classroom into five groups for each day of the week. Each group gets special privileges on their day (like coming to the rug first or lining up first or whatever) and Miriam and Parker are in different day groups (but they do sit beside each other; there's no refuting that). It was a pretty funny conversation to have with this picture right in front of me!

I had a parent-teacher meeting with Rachel's teacher (and Rachel's also doing great—she's reading above a level U (they don't have the tests for V–Z yet but I hear they're on order) and got top marks on their first math unit so we have no complaints there).

(I should maybe mention that the goal for ending grade three is for students to be reading at a level P (whatever that means). Miriam tested at a level M...at the beginning of kindergarten. Rachel at least has a couple other advanced readers in her class and she's in a book group with them. Miriam was in a book group by herself...until she got moved up to grade one).

Anyway, after that meeting we ran into Suzi, who was leaving for the day, so our little girls ran around playing while we chatted (Suzi also has a little girl in kindergarten this year) and she told me about Miriam and how much she loves having her in class.

And then when we finished talking with Suzi we ran into Mr. A in the parking lot so he had to talk about how much he enjoys having Miriam in class.

And, you know what? That scripture in 3 John 1:4 is so true! "I have no greater joy than to hear that my children walk in truth."

It made me so incredibly happy to hear, not only that my girls are doing well academically, but that they're good friends and helpers and examples in their classrooms.
Posted by Nancy at 12:18 AM