So, we took a ferry from Harkers Island to Cape Lookout and it was possibly the coolest thing we did the entire weekend. There's a pod of dolphins in the back sound right now—a lot of mother/baby pairs, too!—because some sort of fish they love is currently spilling out of the river and into the sea and so the dolphins are just busy getting fat. They were swimming all around the boat (but we didn't get many pictures because we had four children, no life jackets (they were under our seats), and I'm super paranoid (BENJAMIN! Need I say more?)): 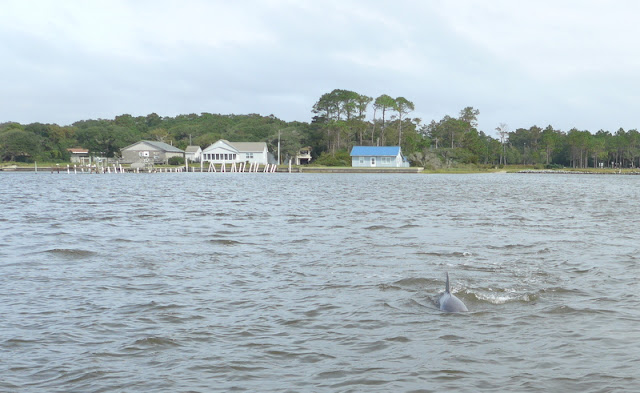 The captain let the kids each take a turn steering the boat. Rachel got to go first: 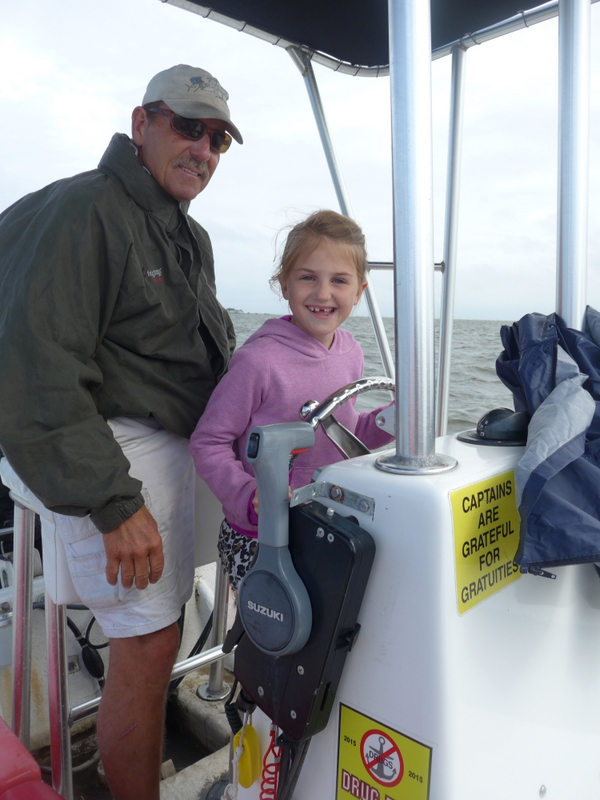 And then Miriam took a turn: 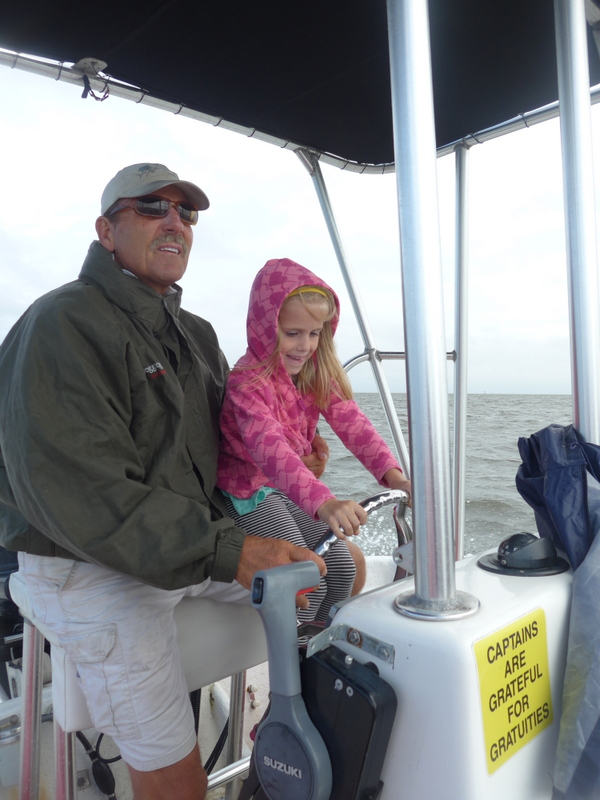 And finally Benjamin (he gets three pictures because even though he's a handful, he's mighty cute): 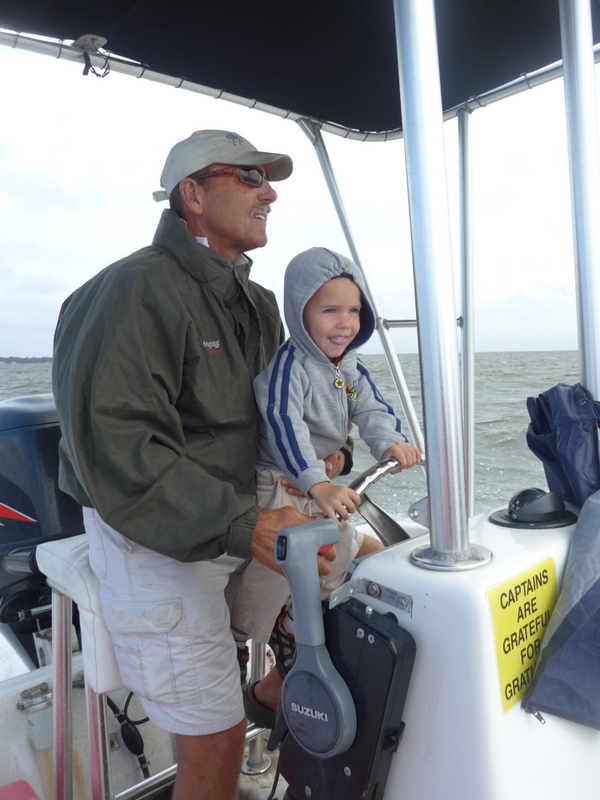 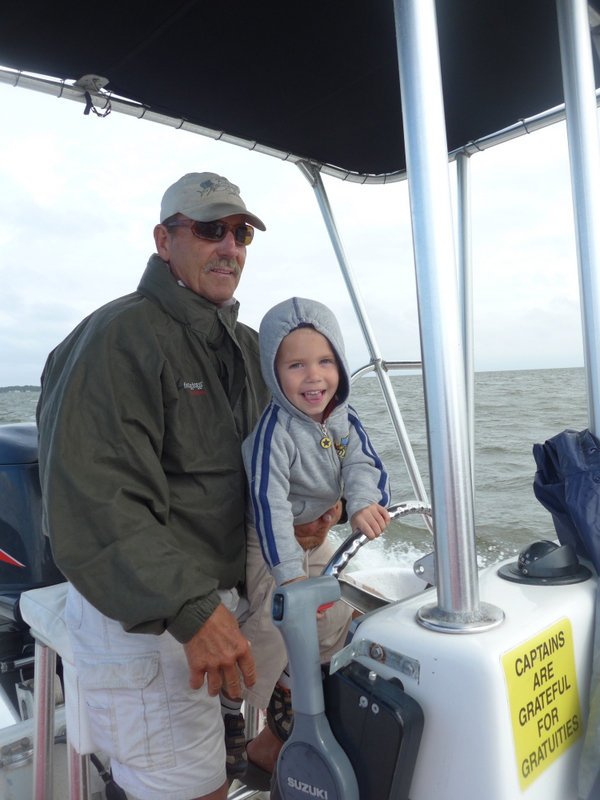 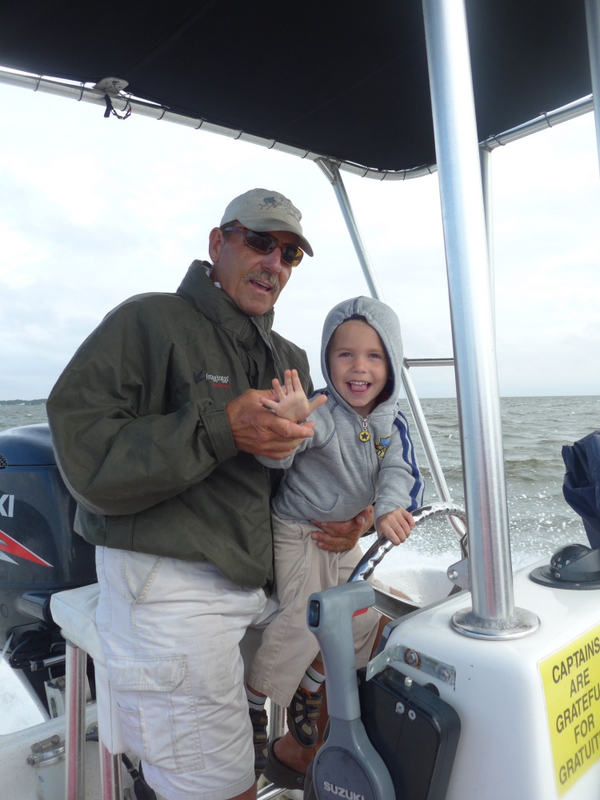 A couple of passengers on the ferry wanted to stop by Shackleford Banks, where a herd of wild horses has lived for ages. They descend from Spanish horses thought to have been abandoned on the island or swum ashore after a shipwreck or something. Anyway, they just live there, minding their own business. We got to see a few from the ferry: 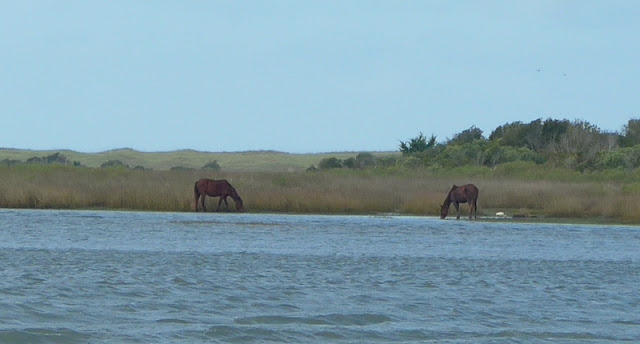 Our destination, of course, was the lighthouse: 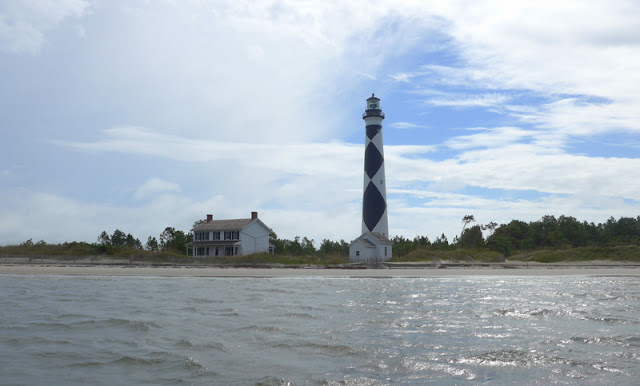 Be still my beating Anne-of-Green-Gables heart, my imagination was running full tilt. Is there anything more romantic (or freakishly windy) than a lighthouse on a secluded island? I half expected to bump into Captain Jim. Or something. But no one works the lighthouse these days. It's all automated. Still so cool! 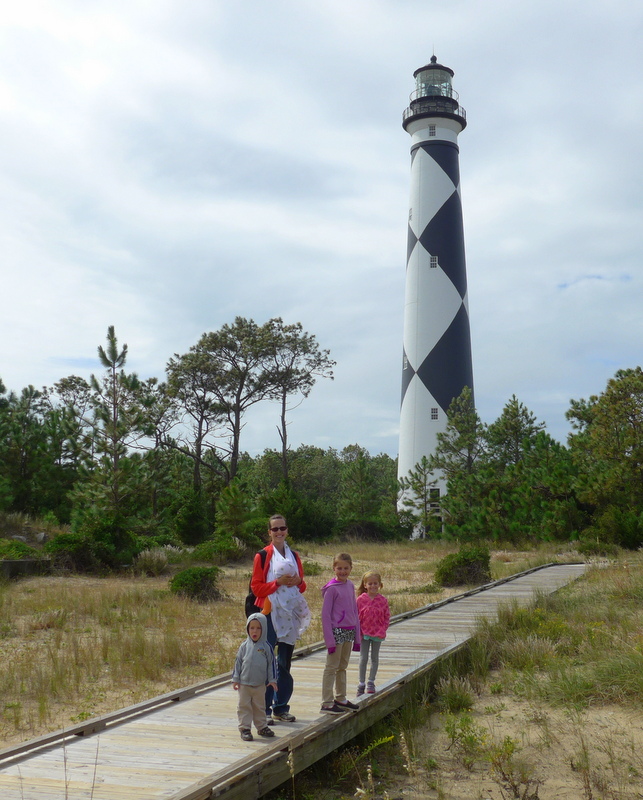 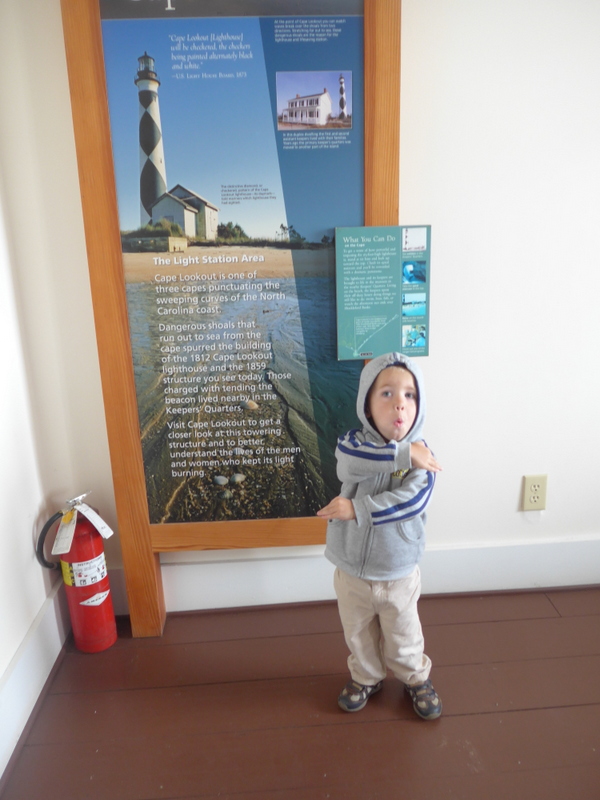 He'll say, "Wait, wait! Let me get cool!" and then do this before he lets me take a picture sometimes (not always but often enough). It's awesome. And I have no idea where he picked it up/thought of it/whatever.

Rachel was originally upset that we wouldn't be able to climb the lighthouse since she's the only one of the kids tall enough to be allowed up there. Apparently it's super windy (which I totally believe because it was super windy on the ground) and they don't want kids up on the deck. Quite understandable.

But we told her she could climb up the stairs to the door. So she did. And then she got all wibbly-wobbly, clinging onto the railing, afraid to take a step. It's a good thing we didn't plan on hiking to the top of the lighthouse because, as you can see, the door is only on the bottom half of the bottom diamond! 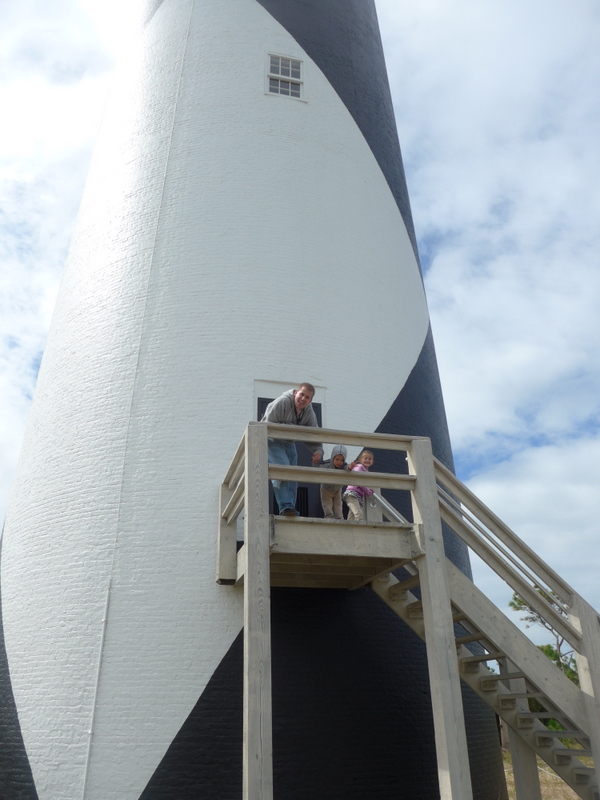 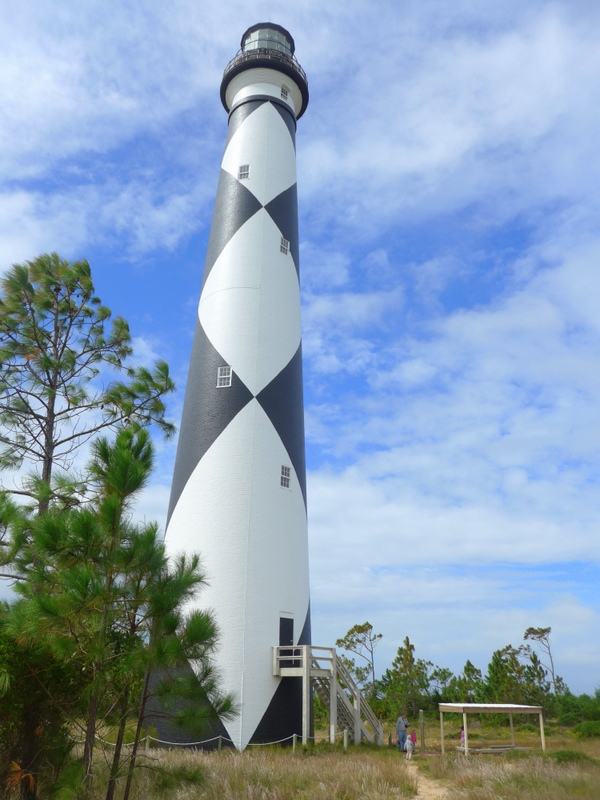 She still had a long way to go before she was actually up high.

The diamonds act as a compass of sorts, the white diamonds pointing east/west, and the black diamonds pointing south/north. We walked around the lighthouse a bit, and toured the little house before heading to the beach for a windy, windy picnic. 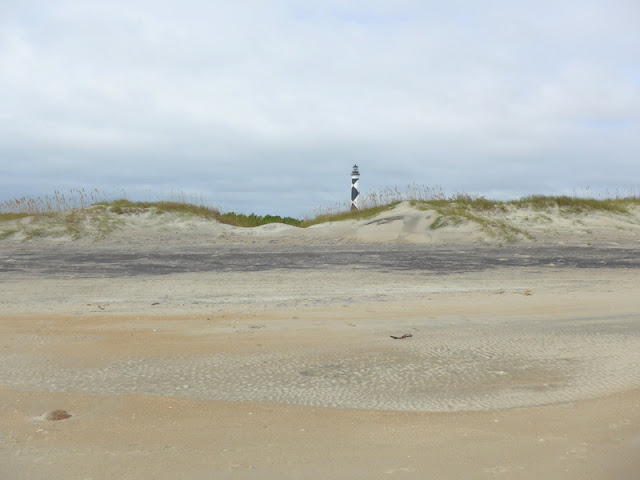 We survived on peanut butter and jam sandwiches, which we're making quite the habit of on our fall intercession trips. I must say, stomaching peanut butter sandwiches day after day was much easier this year (with a four month old baby) than it was last year (during those first few queasy weeks of pregnancy). I remember choking down my sandwiches with tears last year, knowing that I had to eat...but...ugh.

This year I ate my sandwiches like a big girl. No tears. No choking. Just an absurd amount of bouncing because Zoë was fussy and was not a fan of the wind at all. 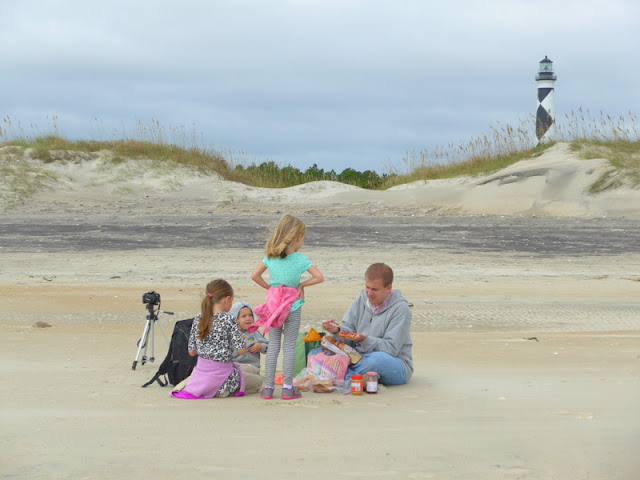 Here are the kids doing their best not to get into the ocean. Have you ever tried not getting into the ocean? It's hard. At least, it is for our family. 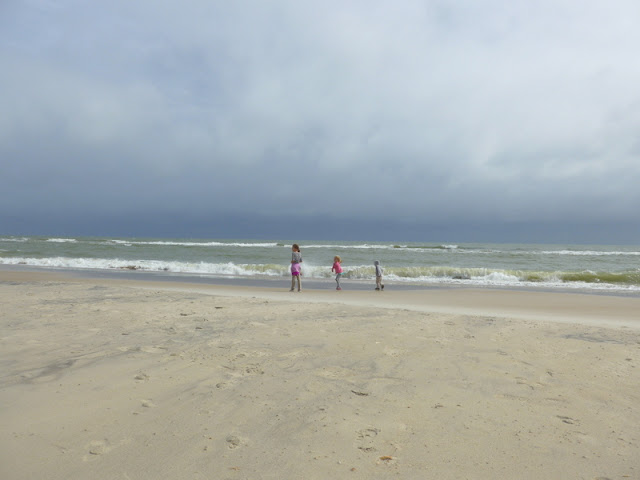 It was so windy that dry sand was being blasted across the wet sand. It looked very similar to the way dry snow blows across ice or pavement, with the exception that it doesn't melt on contact and instead gets everywhere. We had sand all over ourselves and our stuff. We left a pile of things on the beach while we took family pictures and by the time we returned (like fifteen minutes later) we practically had to dig it out!

You can kind of see how hazy it is by their feet: 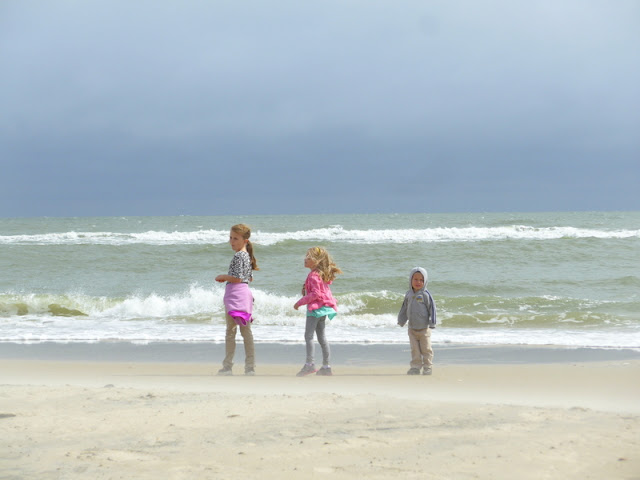 It's always surreal to me, staring out over the vastness of the ocean, knowing there's nothing out there for miles and miles. 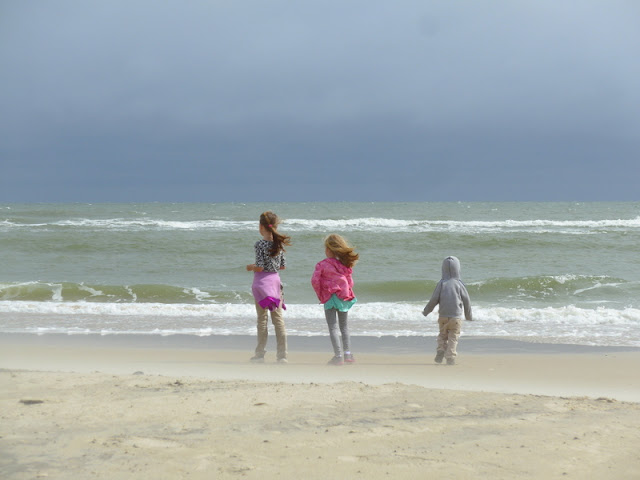 We left the beach soon after we finished taking family pictures (most of which failed because it was so windy). The kids enjoyed finding dead horseshoe crabs and other things that had washed up on the beach. But they did not enjoy the wind at all. 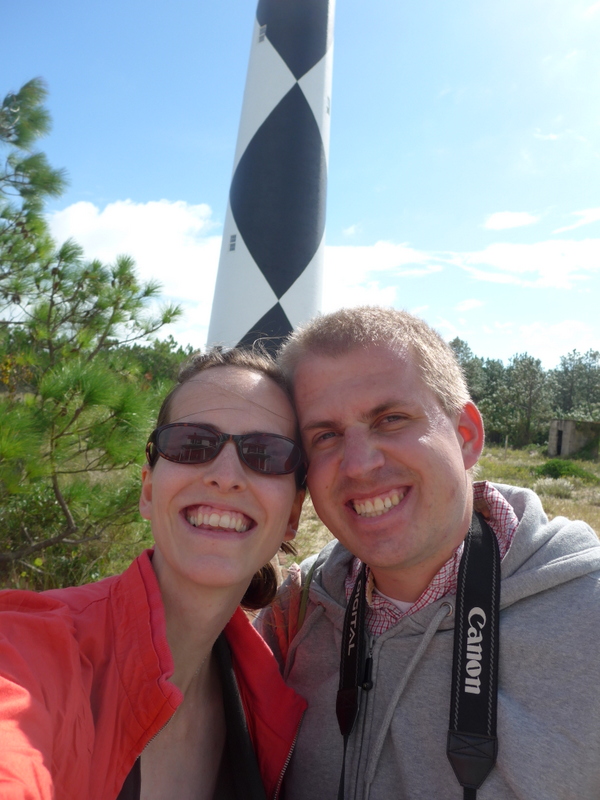 Here's a cute picture of the keeper's house: 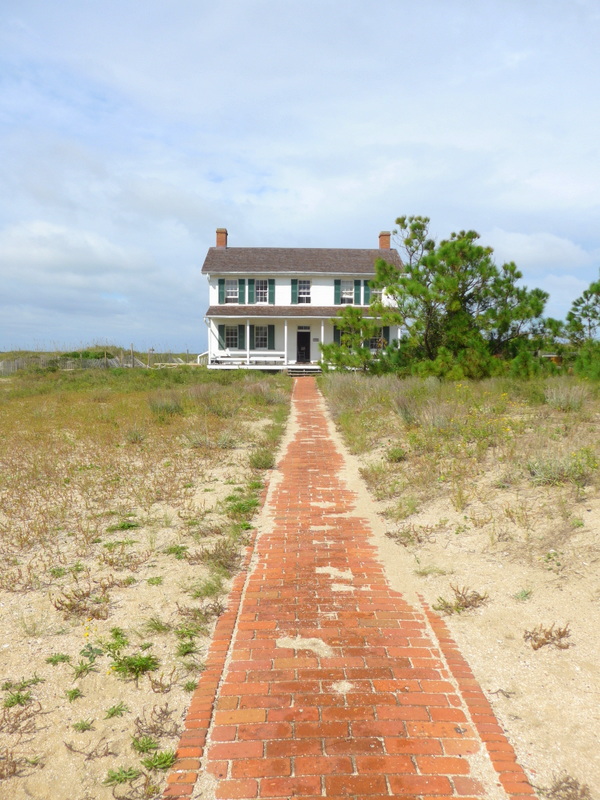 Oh! Here's Benjamin sitting on the steps of the house. I made him let me take a picture there so that I would remember to write about him falling down the steps. We'd just arrived on the island and walked with all our fellow ferry passengers along the path to the keeper's house, walked through the exhibits, and then went out the door to head to the lighthouse. Benjamin took one step off the porch and then face planted, right in front of everybody, and busted his lip open. 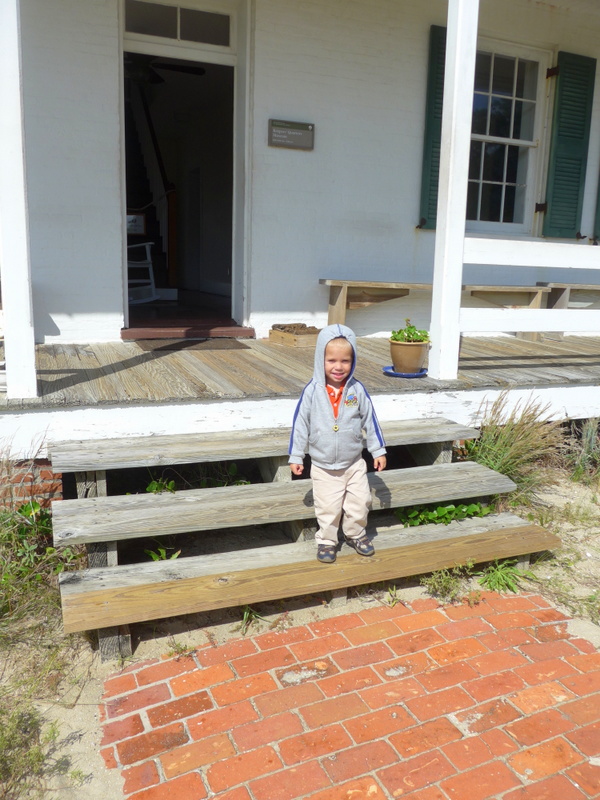 Because if you're planning on taking family pictures that's the first thing you should do, obviously—trip down the stairs and smash your face.

This sweet boy, tried his best to behave during pictures but has a habit of shutting his eyes when he smiles. "Open your eyes," we coaxed. 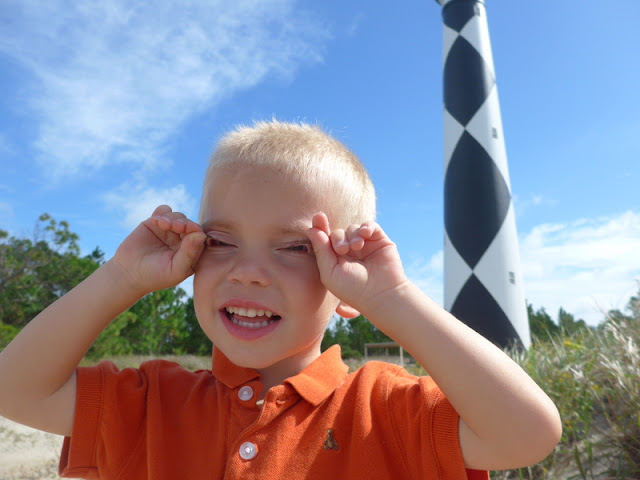 Yes, exactly like that. Of course that's what we meant.

Oh, here's Benjamin showing a little shell that he found, which he later devastatingly dropped on the boardwalk, losing it forever: 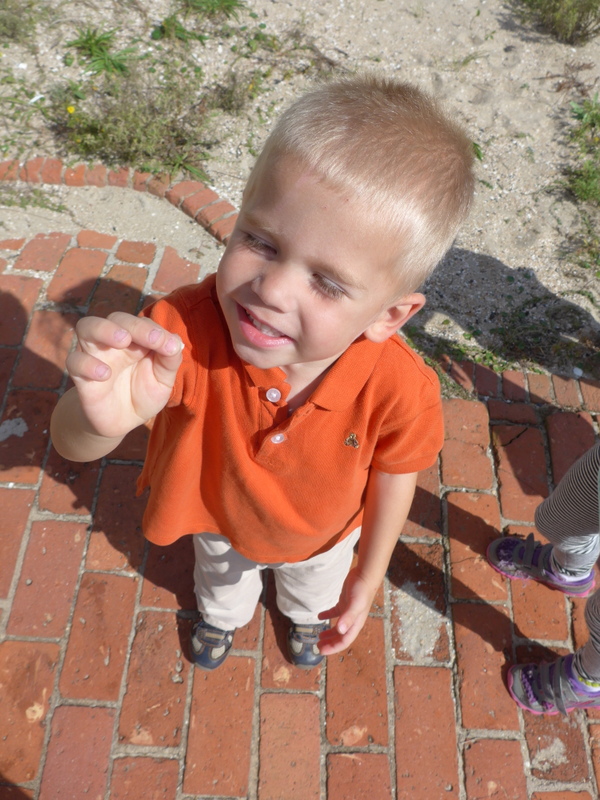 It was quite the tragedy in his little life, producing about the same amount of tears that falling down the porch steps produced. And this being a federal park, you might think it was okay that he'd dropped his shell because you're not supposed to take shells/rocks/plants/whatever from parks, right?

Wrong. The captain explained that we had to leave everything on the island, except for empty shells. Those we could take with us.

The children heard that and planned on finding some beautiful shells on the pristine, virtually void of human beaches. But then we didn't find much at all. And then Benjamin dropped the one shell he wanted to keep, that he knew he was allowed to keep because the captain/ranger guy said he could. And he let Benjamin drive the boat so obviously he knows about these things.

We got back up to the visitor's centre and there's a little sign with a table full of shells that the kids immediately set about coveting. Miriam wanted a nice conch shell so badly. She begged us to let her keep one but we told her she'd have to go ask the park ranger about that herself. So she did. And he said yes—those shells were free for the taking. They find them all the time and bring them up.

She was on cloud nine(ty-nine). 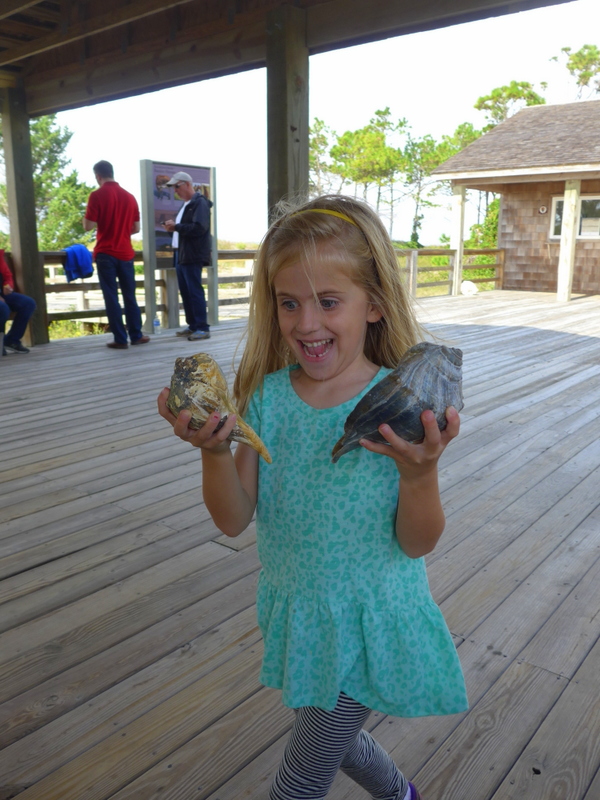 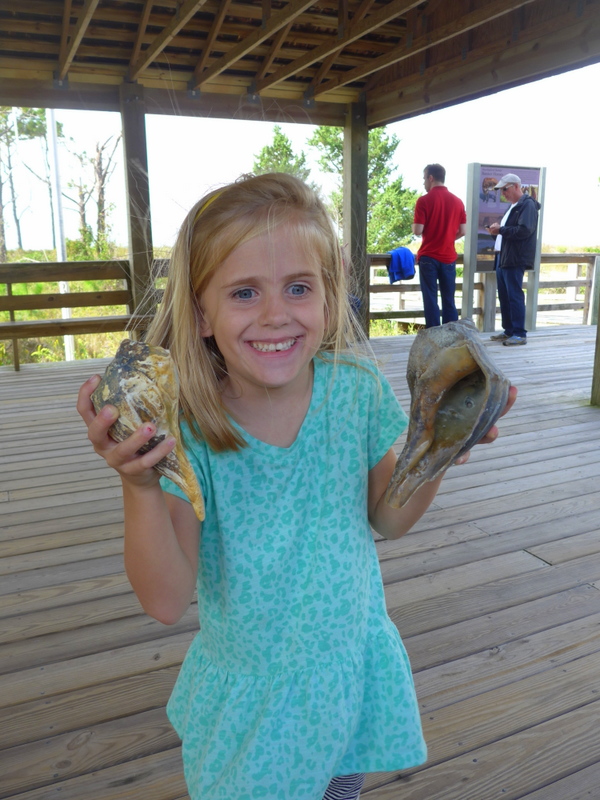 The three big kids each ended up choosing one nice conch shell to take home. Here's Benjamin listening hard for the sound of the ocean in his (not that he had to try too hard since the ocean is just a few paces behind him, in addition to the whooshing he could hear in his shell): 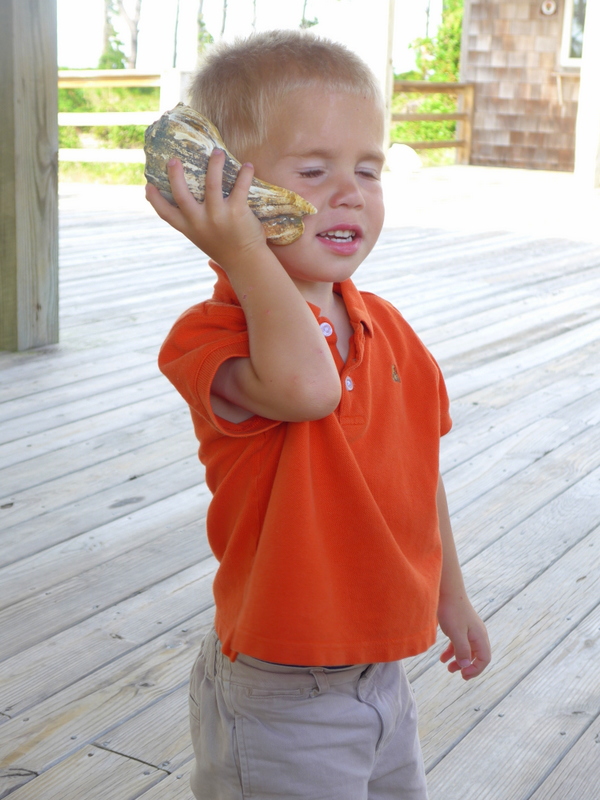 The ride back to Harker's Island was a little choppier than the ride out to Cape Lookout had been. Those of us sitting on the hard benches felt a little like we'd just received the spanking of a lifetime, but Zoë thought being bounced around was quite fun. We stopped to see the dolphins again, though no children got to steer the boat.

Everyone was pretty worn out from our excursion, but only Rachel fell asleep on the way to the hotel. Rachel, of all people! I had to take a picture of that. Obviously. (Benjamin's busy buzzing his lips). 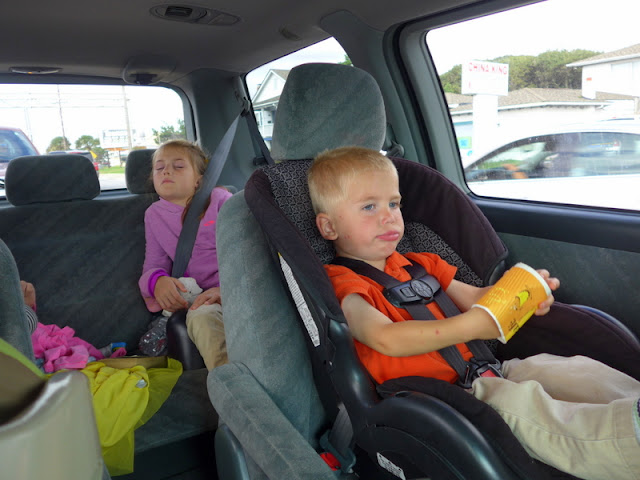 I can't stop myself from repeating how fun this was: so fun!

You'd think it would have appeased my desire to visit PEI, right. But, no. In fact, I think it made me want to visit PEI even more.

My sister's ex-husband's sister's husband (phew—did you follow that?) teaches at a university in New Brunswick and part of me is like, "Ooh! Maybe Andrew could get a job teaching in the maritimes for a while!" because I've always, always, always wanted to go. But another part of me knows that it would get pretty darn cold. And being cold is so awful.

My, has my perspective changed in the past ten years!

I'll probably post more pictures from Cape Lookout later, after I get them from Andrew's computer, but for now Zoë has finally settled down for the night (she was up from 7:45 AM until 12:30 AM with 1.5 hours of napping today so I'm beat) so I'm done for now.
Posted by Nancy at 1:06 AM