The kids were outside playing in the afternoon drizzle—we'd even embraced our Scandinavian roots and left the baby sitting on the front porch in her stroller to enjoy the fresh air while watching her siblings play—when the mail truck pulled up. I'm sure that we'll eventually get used to mail being delivered on Sunday (though I really don't think it's necessary) but for now it's just confusing. Why is the mail truck here? Isn't it Sunday? Oh, a package! Right. They do that now.

The mailman handed the package to the children, who ran it into the house.

"The Heisses," Andrew read, when he managed to get the mystery package out of their clutching grasp. "But who is it from?"

"Maybe from Josie. She was sending something, but I think she was ordering from Amazon. That's not an Amazon package, so maybe it's something else."

He turned the envelope over and let the contents fall into his other hand.

"It's a book," he said, staring at the cover in alarm.

He showed me the cover.

The cover read I'd Tell You I Love You, But Then I'd Have to Kill You. 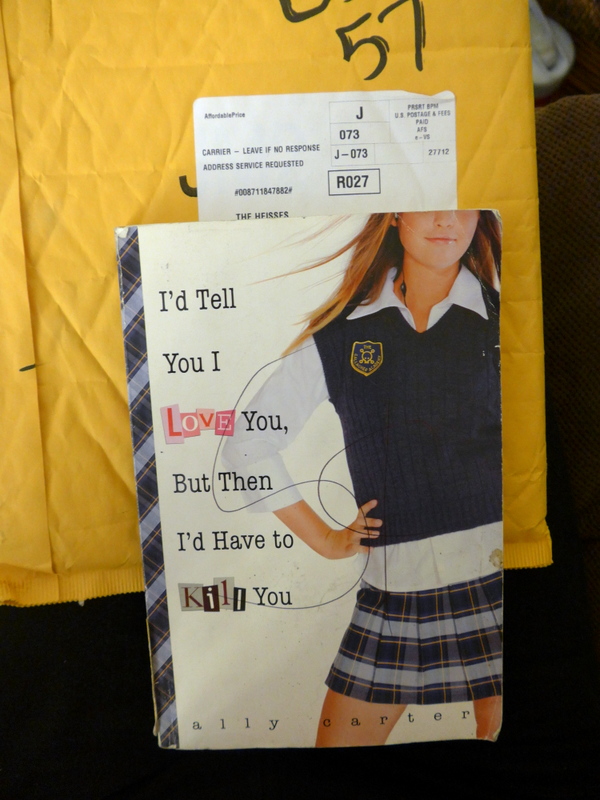 "Where did it come from?" I asked.

"It doesn't say," he said. "There's no packing slip. There's no return address. There's nothing to say where it came from or who sent it."

"Maybe it came to us by accident?"

"It says 'The Heisses.' It definitely was not an accident."

"That's kind of creepy," I said, but this kind of thing has happened in the past. I've accidentally ordered the wrong book on AbeBooks and then had it arrive only to wonder, "What in the world?!"

Who would send us a book—this book—anonymously? Neither of us wanted to admit it, but our imaginations quickly started drifting to worst case scenarios: We had a stalker, a murderous internet stalker.

"Is she an LDS author?" Andrew asked, thinking that could be an innocent motive for someone sending us a book like this.

"Put in the package tracking number. We can at least see where it originated."

It's also not very far away.

We tried to go about our afternoon, but we called the children inside because, suddenly, leaving the children outside to play alone seemed like a wildly irresponsible idea. I'd even left the baby outside—what if someone...

I shook my head. I had to stop thinking these thoughts.

A gust of wind whispered through the trees and I looked at the uninviting sky that has been our backdrop for more than a week—cloudy and gloomy. I closed the back door and locked the deadbolt.

"What do we even do?" I asked Andrew. "Who even does that? Who sends a book with a title like that without at least saying who they are?"

I wasn't going to be able to relax until I knew who the package was from. Frankly, neither was he.

"Got an anonymous package in the mail today and, I'm not going to lie, we'd kind of like to know who sent it. Anyone in Facebook land afraid to tell us your true feelings...?" I wrote, attaching a picture of the book.

A few minutes later my computer dinged. It was my sister Josie.

"I sent it. It's the book about spy girls [that I told you about]. I think I bought it used cause it was way cheaper. 'Cuz I am cheap," she wrote.

"No, that's fine!" I wrote back. "Hahahaha! We were like, 'Uhhhhh....who sent us a book about wanting to kill us?' ...IT'S A SUPER CREEPY TITLE TO RECEIVE ANONYMOUSLY!"

"Hahahahaha!" she said. "I'm sorry I freaked you out! It's a funny, cute spy book about an all girls school. Very chill."

"Too funny!" I said. "We can't stop laughing over here! We were stewing about this for, like, an hour!"

I am so glad we worked that out. Scariest/funniest experience we've had in a long time!
Posted by Nancy at 8:55 PM