Rachel had a soccer game this morning, which she said was her "best ever!" Her team scored two goals (and lost 2 to 10 or something like that). They've had a rough season. But it's over now because with daylight savings ending it'll be pitch black outside by the time practice begins.

I stayed at home with the little ones and we video-chatted with Uncle Patrick so he could wish her a happy birthday. He wanted to call last week but he ran out of internet. He's in wee Riviere, South Africa, doing a conservation internship right now. I guess he prepays for internet and when he uses all his "data" then he has to go buy a new plan. Or something. Anyway, we got to talk to him today, which was lovely!

We also did a lot of raking. When Andrew and Rachel came home he said, "Oh, I was just going to get the leaf blower out and do that." So he did. That was a much faster way. We made the biggest leaf pile in history and spent a lot of time jumping into it before we managed to fit it all into one yard waste bin (I stood in the bin and acted as the leaf compactor while Andrew piled the leaves in). 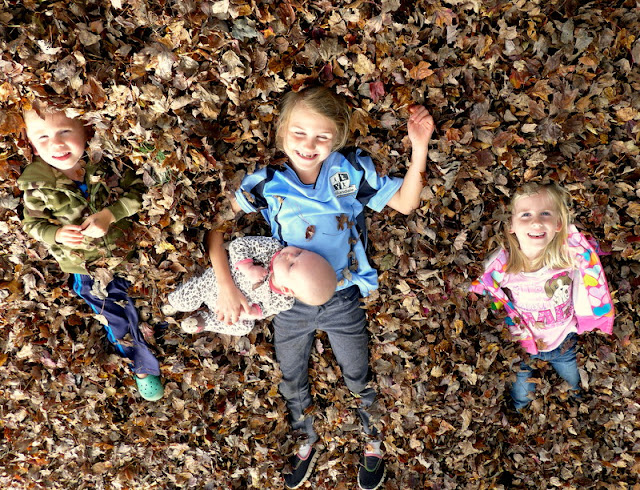 By the time we were finished we were all completely covered in bits of crunchy leaves so Andrew had us line up on the driveway and he blew every last bit of dust off us.

By the time we were done with that it was time for dinner and pumpkin carving and trick-or-treating.

Here's the rundown on our costumes, even though we've already worn them...

Rachel was the eleventh Doctor. She wore the fez she made for her second grade musical (out of a sour cream container and leftover fleece), her bow tie came from some kid in Grandma and Grandpa's ward, her sweater is an old one from Auntie Josie, the blouse I actually ordered for her since it's something she'll wear in the future, she made her own psychic paper (which she pronounces as "side-kick paper"), and Auntie Josie sent her the sonic screwdriver as a gift. 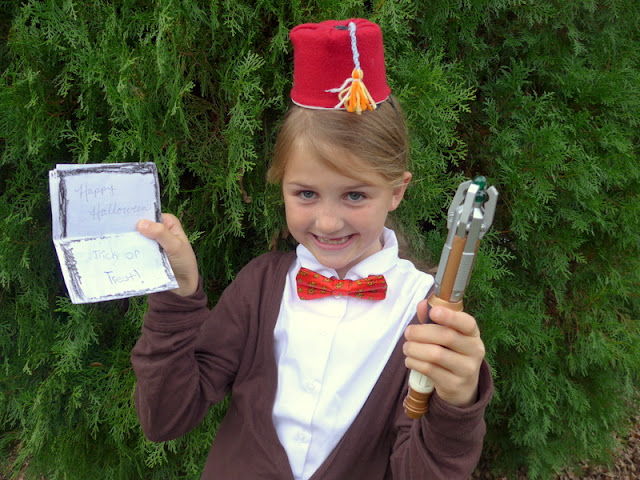 Miriam dressed as Snow White. My mom made did such a gorgeous job on this costume. She went for the short'n'sassy look again for trick-or-treating, adding tights because it was a little chilly outside this evening. I'm sure this costume was a big headache for my mom, but it turned out so beautiful! 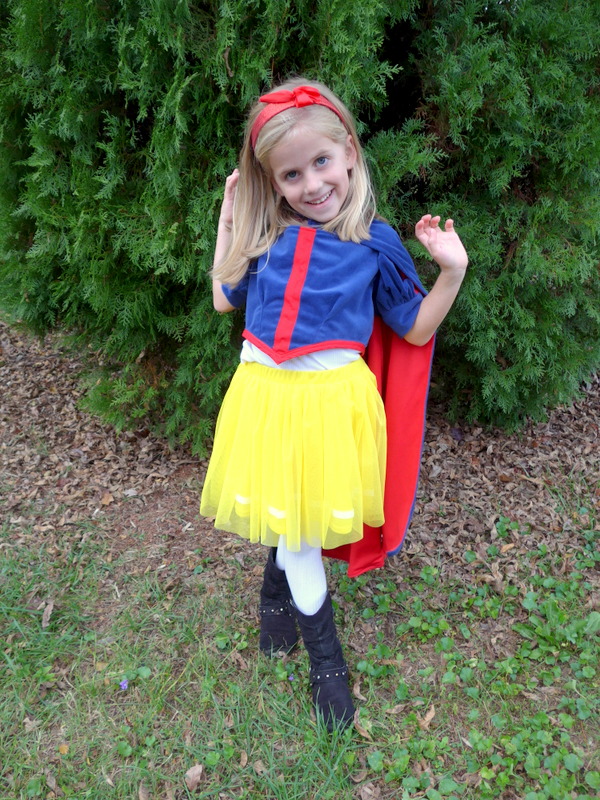 Here's Benjamin, the train engineer, driving Thomas the Tank Engine. The overalls and shirt were from a hand-me-down bag. The handkerchief was borrowed from a neighbour. The hat came from an impulse buy at Target. The train was made from supplies we had lying around the house: a diaper box, a mailing tube, stuffing from an old pillow, a paper plate, coloured paper, and six sour cream lids. Oh, and packing tape—lots of packing tape. That stuff is tough. 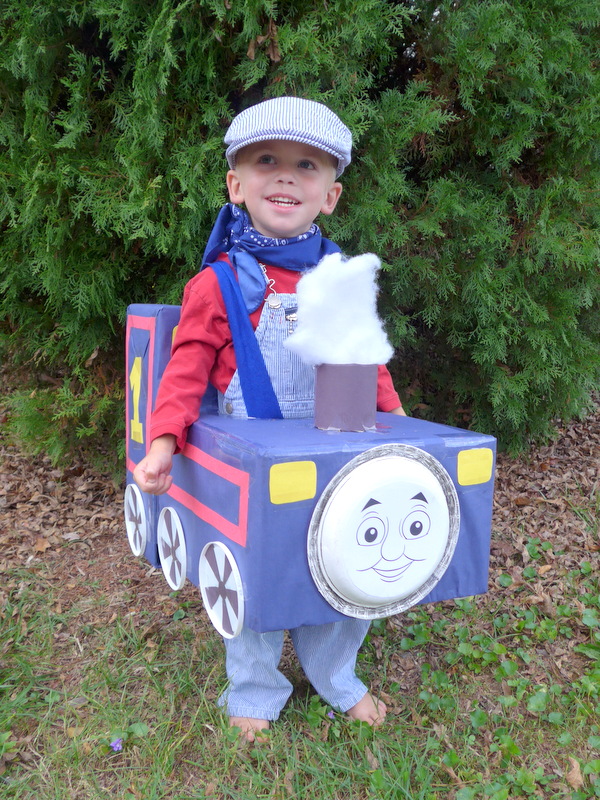 The first time Benjamin wore this costume out (for the trunk-or-treat) he took about three steps and then tip right over, landing on poor Thomas' face. I was worried he'd completely crunched his costume before he'd really gotten to use it, but when we turned him upright (he was just dangling in his costume; it was hilarious), his costume was perfectly fine. I was shocked at how sturdy it was. 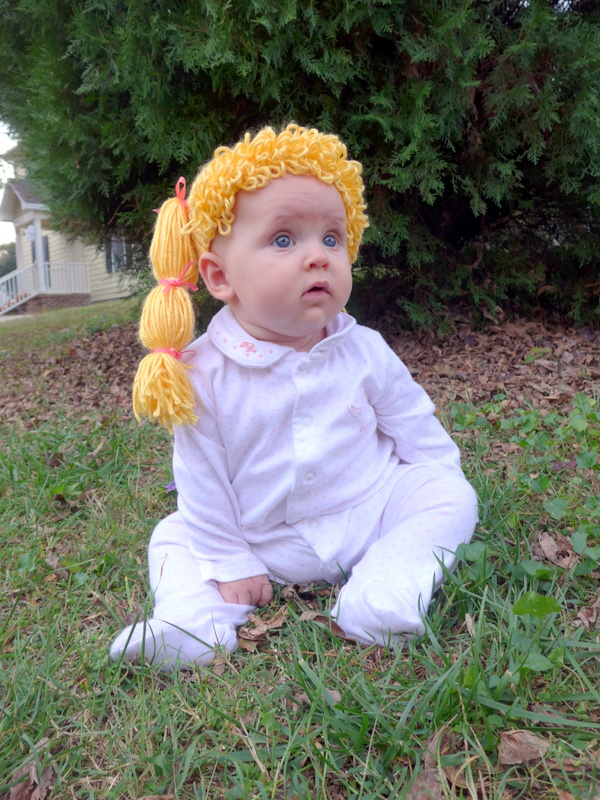 And here's my Little Cabbage Patch Doll, Zoë. Did I already tell the story of how I got this wig? I seriously can't remember anything these days. I had started to make a hat like this for Zoë but my gauge was off and it didn't fit and I got discouraged because I had so many other things to do, so I put it aside and was like, "Whatever. She can be something simpler."

Then I went visiting teaching and my companion told me that her daughter was going to be a Cabbage Patch Kid and that Rachel Green was making the hat for her. So I said, "Oh, how fun! That's what I was going to dress Zoë as but I messed up the hat...[truncated for brevity]...so she'll just have to be something else."

Well, then I went to book club and my companion said, "Hey, we have a hat for Zoë to try on!"

Rachel (Green) had made this hat first but then was worried it wasn't blonde enough so she had made a second one. So I put it on Zoë (because she still goes with me everywhere) and everyone in the room agreed that she couldn't not be a Cabbage Patch Doll. So, that's what she was.

I was making a brunette wig for her, though, because making a blonde one seemed like a bad omen. Not that blonde hair is bad. I love all the blondes in my life. But Rachel (Heiss) and I are crossing our fingers that we'll get another brunette in the family. She's got a little peach fuzz coming in and it looks dark...ish...but it's kind of too soon to tell.

Anyway, here are our lovely trick-or-treaters all together: 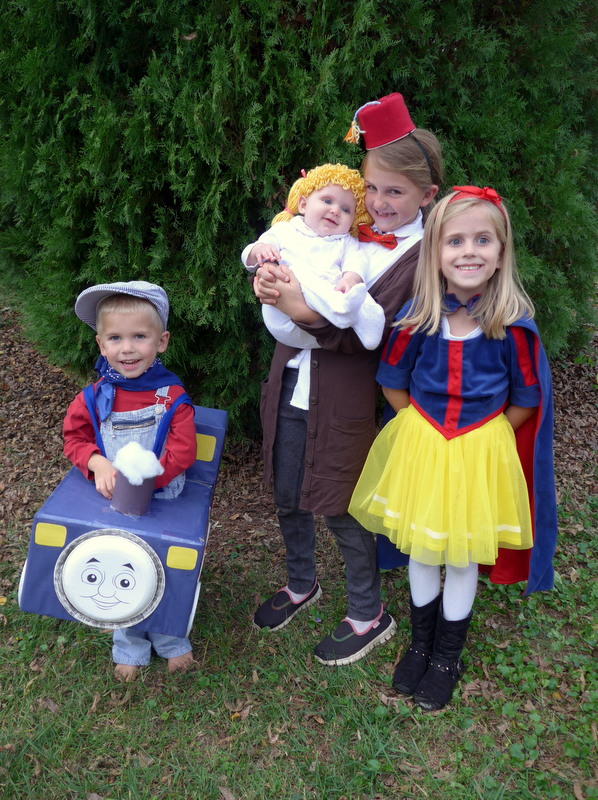 I dressed up as well, but we didn't get a picture. My Miss Frizzle costume was made using a dress I had on hand and felt appliqué Rachel (Heiss) and I stayed up way too late working on together one night (made from some scraps I got from someone else). I just pinned them on with safety pins (so now I need to unpin everything). 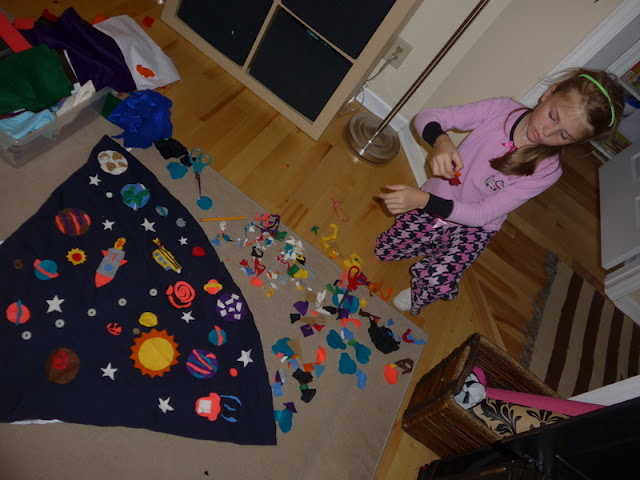 While I took the kids out trick-or-treating (as I do every year), Andrew stayed home to pass out candy and even managed to whip up some apple cider donuts. They were nice and warm when we got home. What a way to start a fast Sunday, with the smell of fresh donuts lingering in the air (not that I fast while I'm exclusively nursing, but still)!

All in all, it was a wonderful Halloween.
Posted by Nancy at 11:45 PM