They had elaborate plans, so I had to reign them in, explaining that decorating cakes isn't quite as easy as it sounds. Miriam wanted a "doctor cake," which I had thought meant she wanted a Doctor Who theme. What she actually wanted was a medical doctor theme (Miriam wants to be a doctor when she grows up) so that's what we went with. The girls had fun learning about cake decorating—applying steady pressure is tricky! 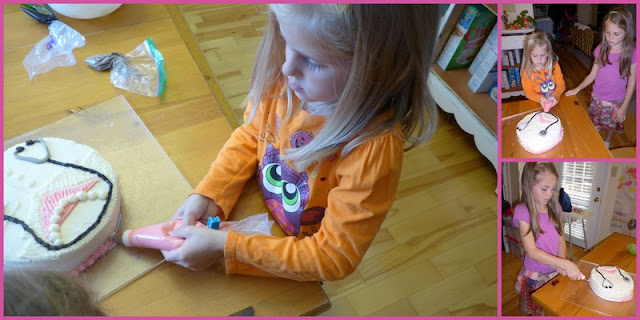 Here's our finished cake (it's a doctor's white coat, with a pink shirt, a pearl necklace, and a stethoscope, in case you couldn't tell (this was our inspiration): 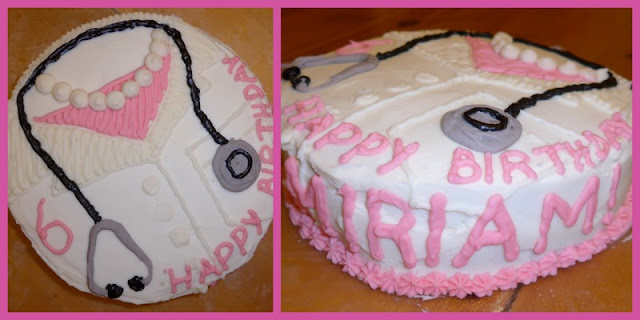 It's not pristine but it made her happy. I suppose we can skip to the candle part since that's the next picture I have ready: 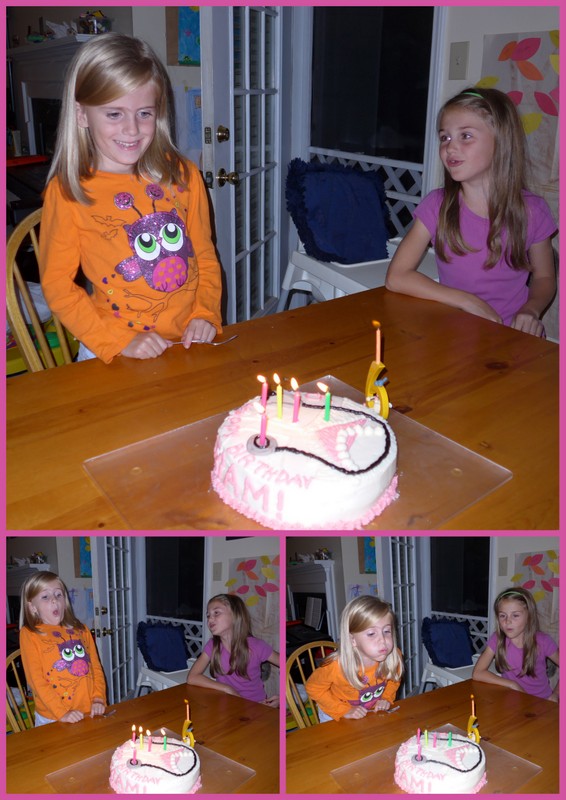 When we were cutting it up to serve, Miriam first claimed the letter M. Then she said, holding her hand over the diaphragm of the stethoscope, "But save the testiscope for me, too!"

"Stethoscope!" Andrew breathed, relieved. "I was walking down a different path with that word!"

This coming from the man who walked by while I was doing the initial outline of our design and, knowing it was medically-themed, gasped, "Is that a uterus!?"

No, dear, not a uterus (but I was going down the same testiscope path that you were).

Miriam was very excited for presents. She got the mail yesterday and there were two cards for her! And when I said that Rachel and Daddy were going shopping after soccer she said, "For what? For more presents for me?!" Unfortunately the answer was, "No, for groceries."

Here she is opening up her present from Naanii: 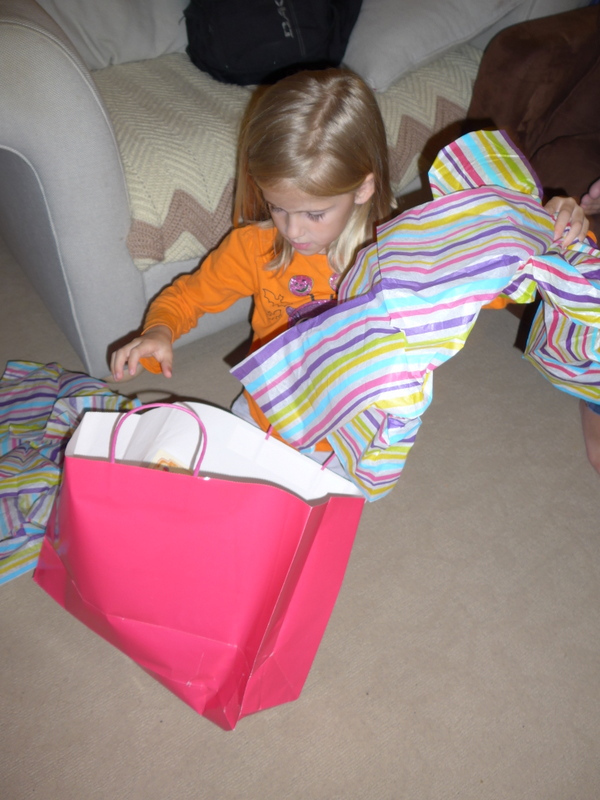 She got a little "dolly and me" outfit, as well as a Victorian sticker-doll book. Both presents were very exciting. The girls spent all their reading time working on the sticker book together (I'm not sure that really counts as reading but, hey, they weren't fighting, so...). 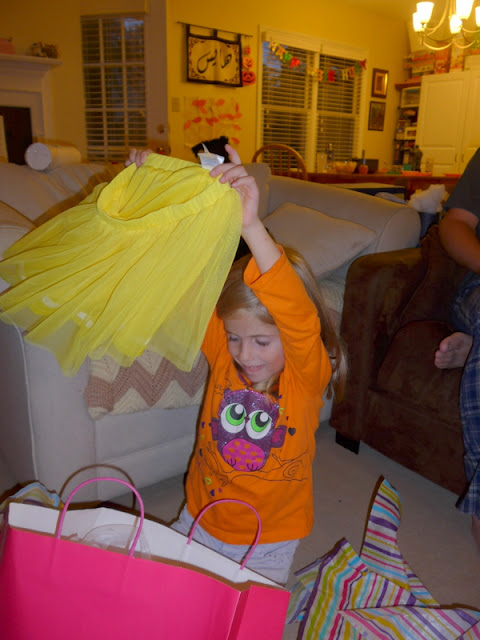 Andrew and I gave her a little messenger bag that came with fabric markers so she can decorate it herself (okay, so honestly he and Rachel did pick this up when they went grocery shopping (shhh...don't tell)) and a copy of The Princess in Black and the Perfect Princess Party (which I somehow managed to buy used even though it was released on October 13 this year) book. She was more than a little excited about the book. 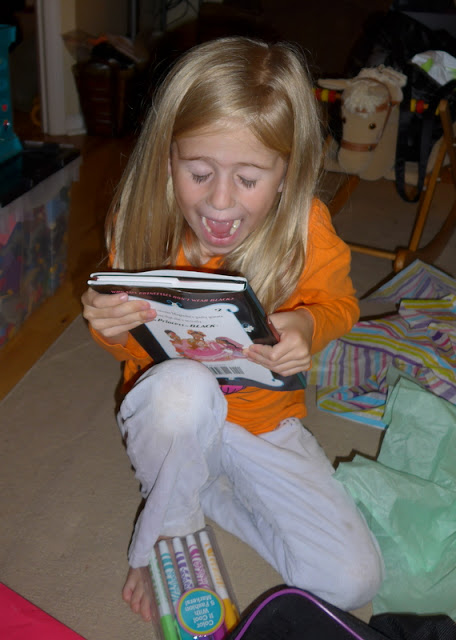 We took a little break to Skype with Grandma and Grandpa (I didn't even think to have her open their card while we were talking with them) before returning to our task. 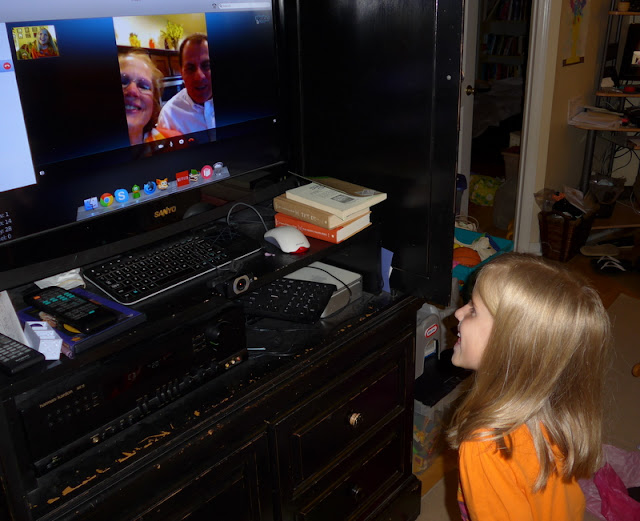 Next up was a comb and mirror set from Auntie Josie. Miriam was thrilled. She's planning on taking them to school for show-and-tell on Friday. She was making her most elegant faces into the mirror. 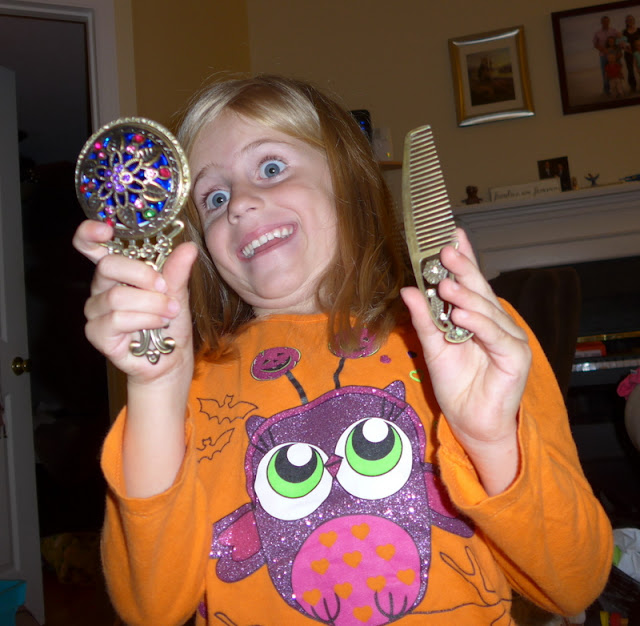 She saved the least exciting presents for last—the cards—but she carefully read through every. single. word. Here she is with the card from Naanii and Bumpa (and a whole lot of other people—cousins and aunts and uncles (my mom has people sign birthday cards for us at family dinners, which is nice because then we get to hear from many people all at once)): 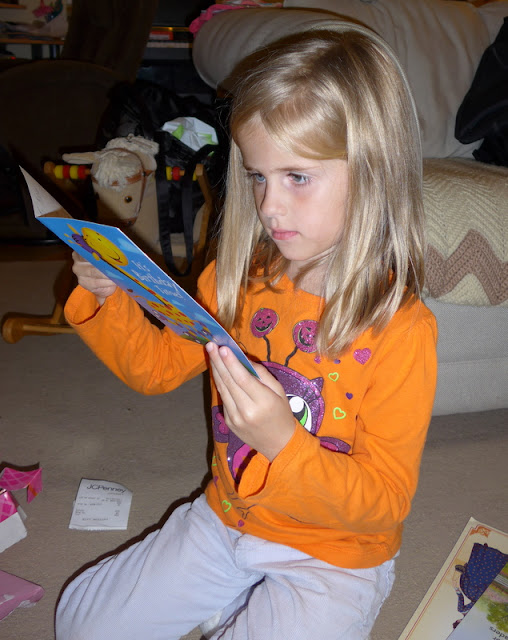 And here she is saying, "What's this for?" while holding the check from Grandma and Grandpa. The picture's a little out of focus, but the quizzical look on her face is priceless. 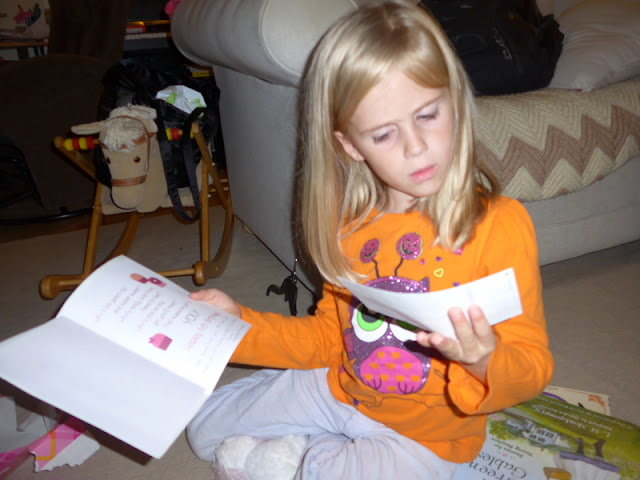 She also got a gift from Brother and Sister Wood, one from Rachel and Benjamin, and the primary sang to her and gave her a goody bag. It was a  pretty good birthday for this little lady! We sure love having her around! Thanks to everyone who helped make her day special.
Posted by Nancy at 11:50 PM