Duke Gardens with Naanii and Bumpa

After spending the morning at the pool, we came home for lunch and some downtime—napping and board games and a little bit of Mako Mermaids—before heading off on our afternoon adventures.

Here's my mom ever so patiently playing Chutes and Ladders with the kids (that game is one of my least favourite games to play, so I think she's a saint): 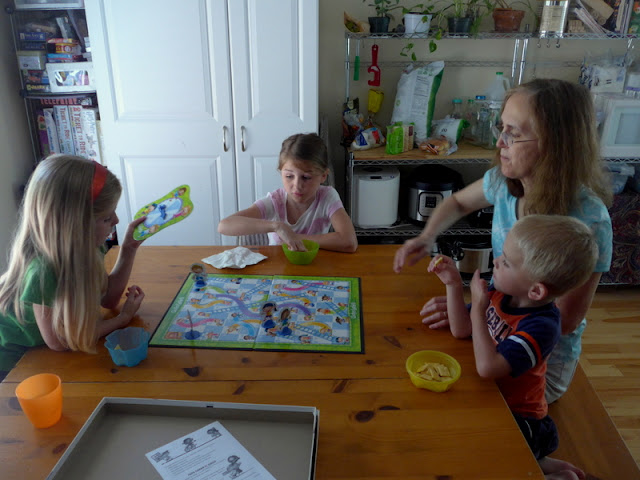 When everyone was awake and ready to go we headed out to Duke to meet Andrew on campus. None of us (except for Benjamin, perhaps) had seen his "new" office (he's been there quite a while already so it's not really new) so that was fun to do! You can't see much of his office in this picture because we filled it with so many people. 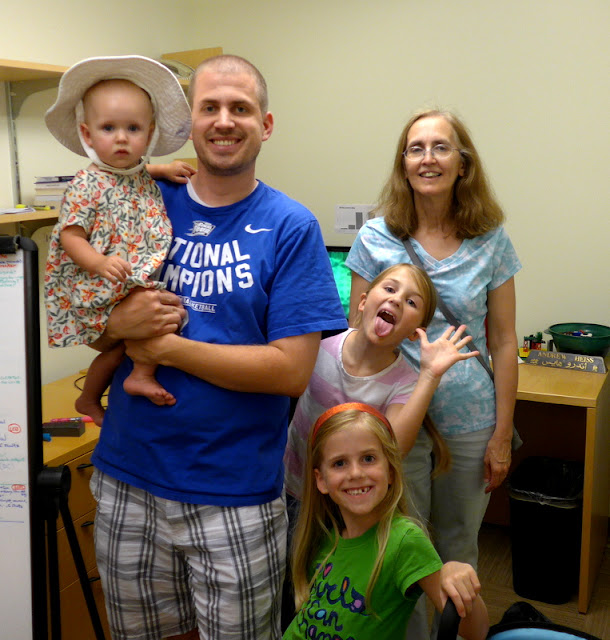 One day we really ought to get a picture of Andrew working in his office. He's at the point in his degree where I'm realizing we're not going to be here forever. And not only that, but that we'll be leaving relatively soon. It's kind of mind-boggling; I keep making lists of things we haven't done yet in my head.

From Sanford/Rubenstein we headed to the chapel. It recently reopened after having been closed for restoration for a year or so, so it's been quite a while since we've visited. (It was closed, for example, when David visited us shortly after Zoë was born (my, how she's changed!) Andrew walked over the day it opened (May 11) but the rest of us haven't been down to campus...at least not for any fun reasons since then. 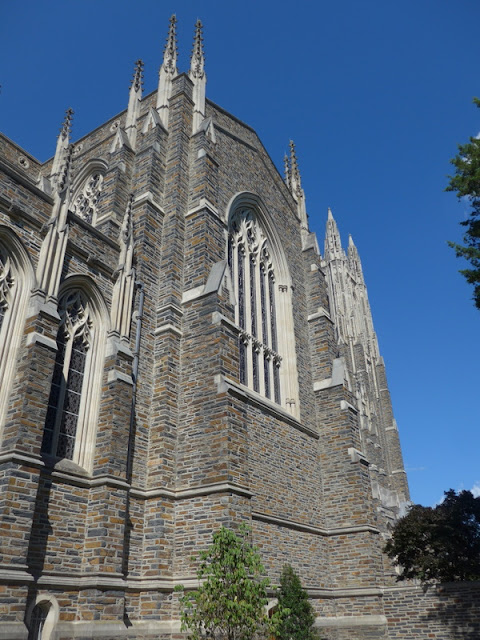 My mom visited the chapel with us when she came out in 2014, but my dad hadn't been there yet. It's always fun to take someone somewhere for the very first time. My dad seemed rather impressed with the stained glass windows. 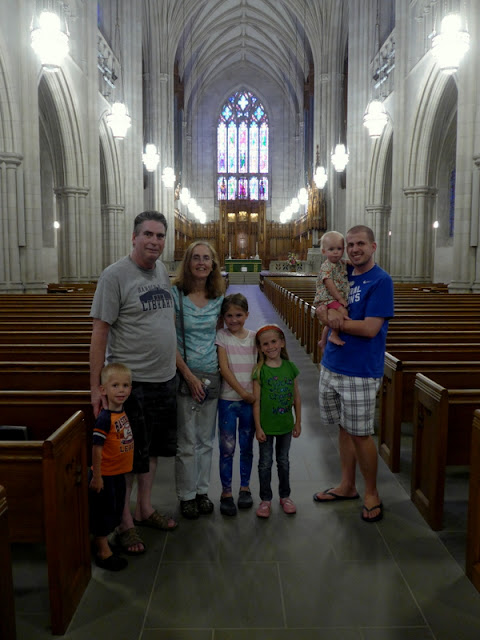 We were all impressed with the wonderful air conditioning. It was quite hot and humid outside today! 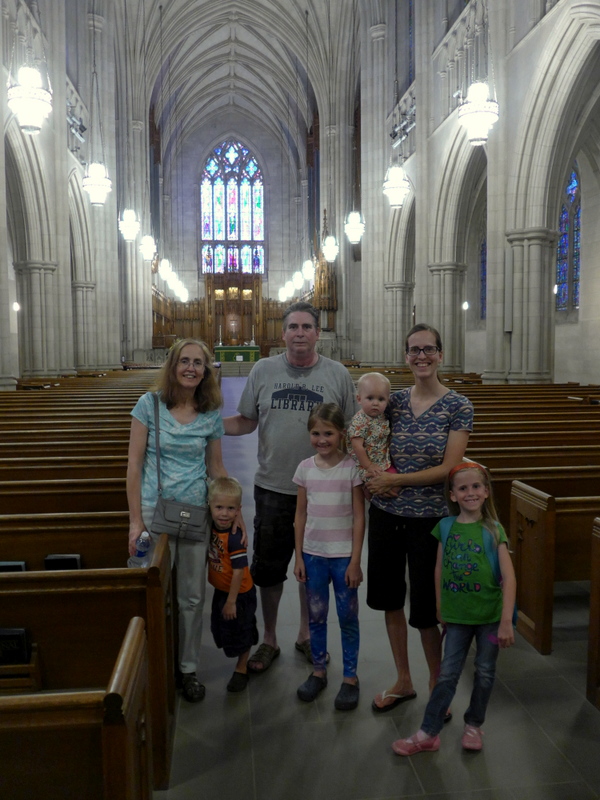 Andrew left us at the chapel to return to his office while the rest of us headed for Duke Gardens. Benjamin has been begging for days to take Naanii to Duke Gardens. He loves the gardens!

Here we are taking a snack break under a magnolia tree. Everyone's mouths are full of carrots, so that's why they all look kind of silly. 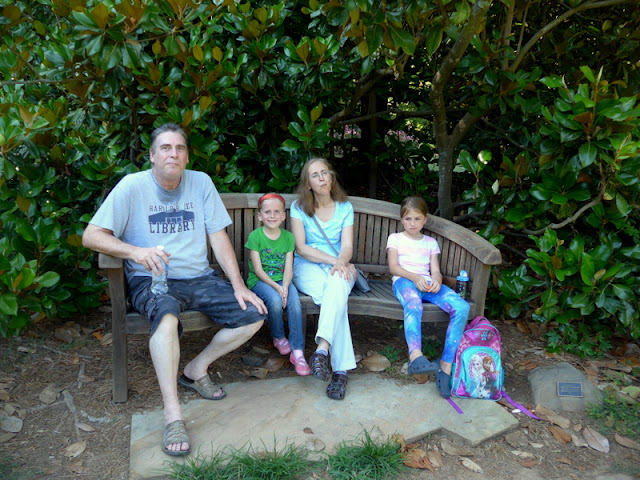 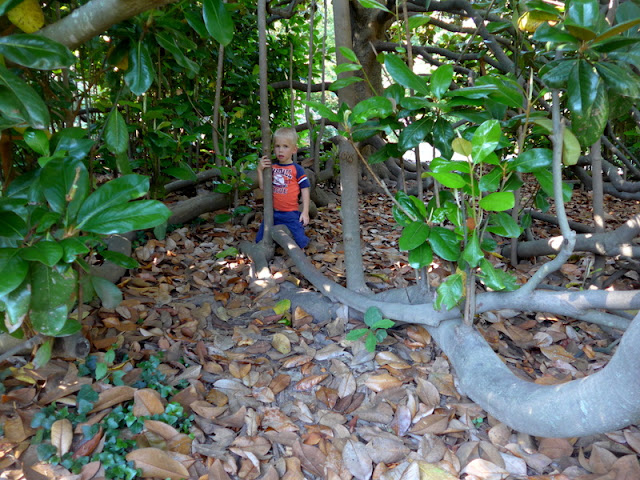 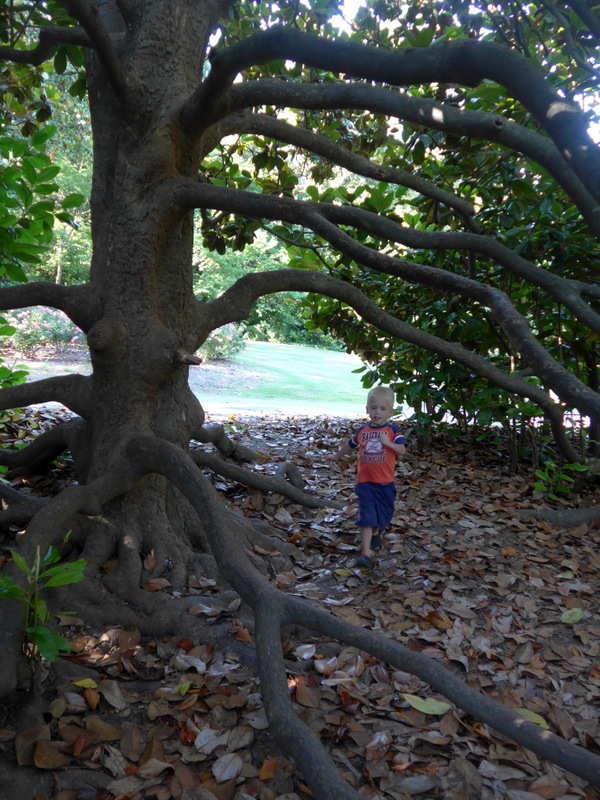 Miriam kept calling it a mongolia tree rather than a magnolia. I understand her confusion because those words are rather similar! 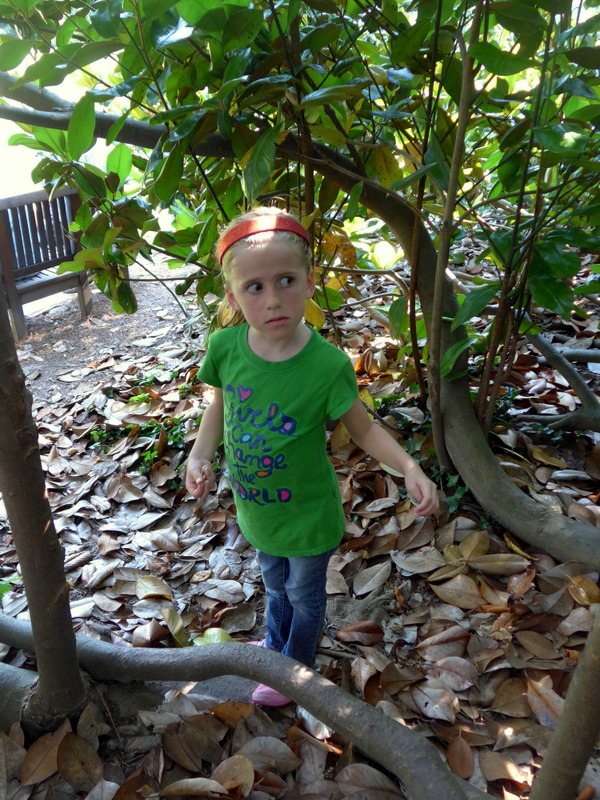 Before we could go to the fish pond the kids wanted to visit the other pond but it was so hot that no grown ups wanted to join them. They ran off to look at it themselves and then ran back. 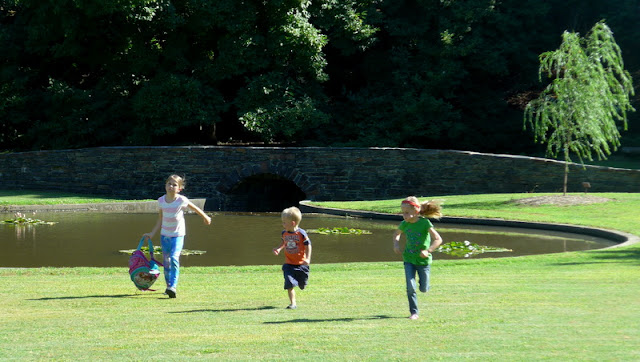 And here we are at the fish pond. Zoë is getting to the age where she's quite excited about animals, which is fun. The bigger kids were making me nervous, though, standing with their toes sticking over the edge of the pond (not in this picture, obviously, but later). 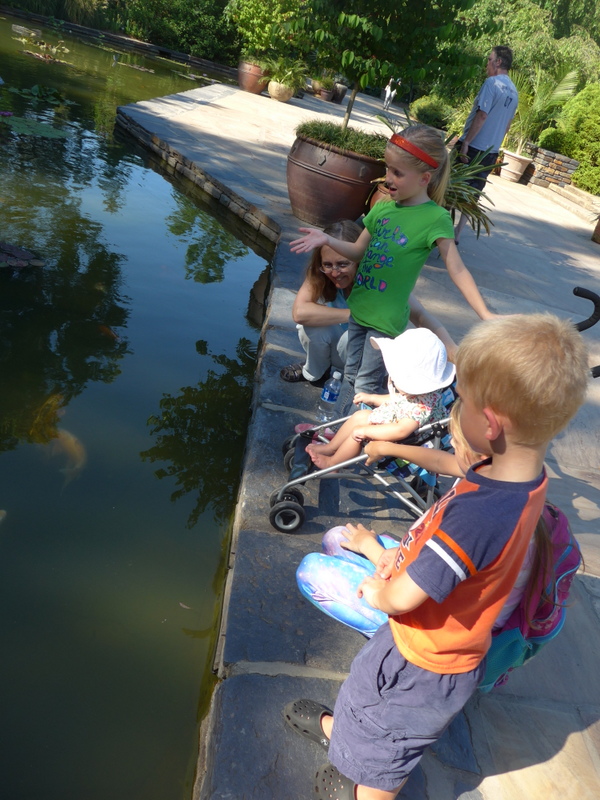 Benjamin likes to push Zoë around, though I'm not sure anyone else likes it when he does. I said no to him pushing her by the pond(s) so I thought I'd give him a turn up by the azalea court. The very first thing he did was ram her into the statue-thing on the ground. 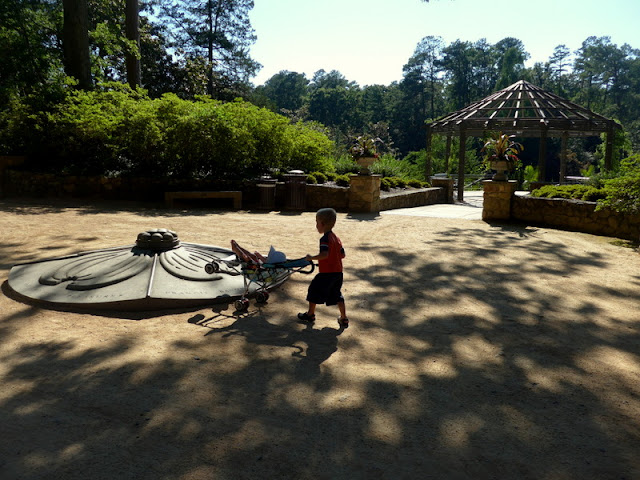 We had been talking about bananas earlier in our walk through the garden so the kids were excited when we stumbled upon some banana plants in the asiatic garden. 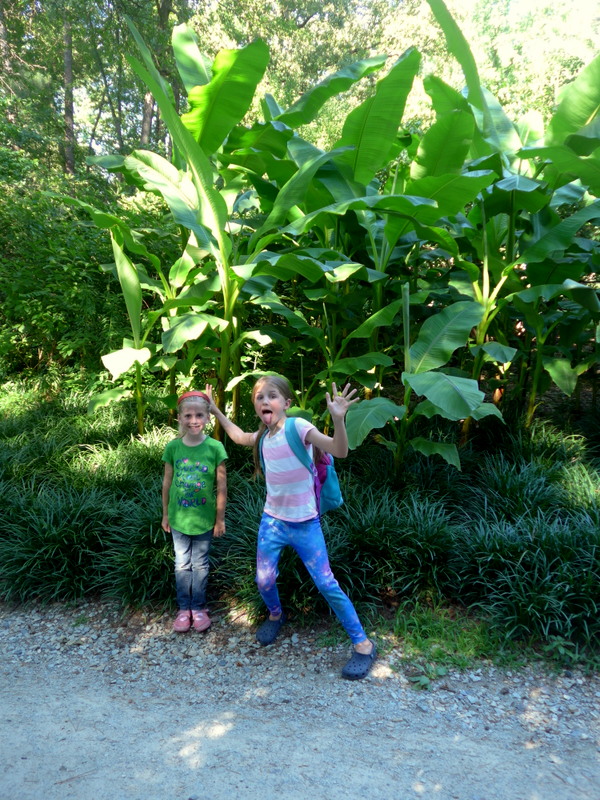 Our final stop at the garden was the arched bridge. It's so beautiful, all red and vibrant, against the green of everything else. I love how green everything is out here, but I'm partial to a good pop of colour, as well. I love flowers in my garden, not just one big verdant mess. It's a mess, of course, because it's my garden. Your garden might be perfectly lovely, whether it's all greenery or whether it has colourful blossoms in it. My garden, however, is a mess. But I enjoy my flowers anyway. 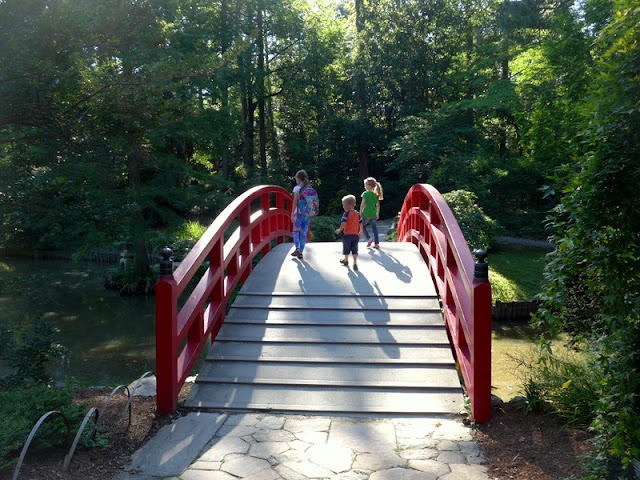 Speaking of messes, one of Benjamin's favourite things to do is to make a big pile of stuff in the living room so he can jump on it. It's been his thing for quite a while; it took me a long time to get him to understand that when he does this he can't mix hard things with soft things. I suppose the initial building of the "fort" or "nest" or "house" or "boat" or whatever he's calling his structure-de-jour is fine when he uses little chairs as a base, or when he throws the bathroom stool on top (though taking the bathroom stool out of the bathroom kind of drives me bonkers because, ew), but when he goes to jump on the pile it needs to be constructed out of 100% soft stuff.

He's had several accidents where he's jumped on a pile and landed on a poorly-placed toy truck or a stray chair leg...and it's no bueno.

So I finally got him to understand that he has to only use soft stuff for this activity: pillows, cushions, blankets. He regularly gathers up these supplies so he can throw them in a big pile.

The other day he was constructing something out of our soft stuff, but the girls are home from school and they were messing with things (you can't use that blanket!) and he was getting frustrated because he's used to ruling the roost while they're at school. Finally he got so fed up that he stomped his foot and shouted, "Leave my mess alone! This is my mess! I'm the one building it! And you can't play with it! It's my mess!"

I looked at my mom and we shared a laugh over his us of "mess."

It seems I've managed to drill another principle into his head, the first being to only use soft stuff for this activity, and the next being that this activity is just a mess!

I'm sure he's heard me say, probably a thousand times, "Clean up this mess!" or "You're making a mess!"

It's quite possible that he thinks the specific thing he's doing really is a "mess," and that he has no general definition for this floating around in his brain because "mess" means "when I throw all the pillows and blankets in a pile on the living room floor." 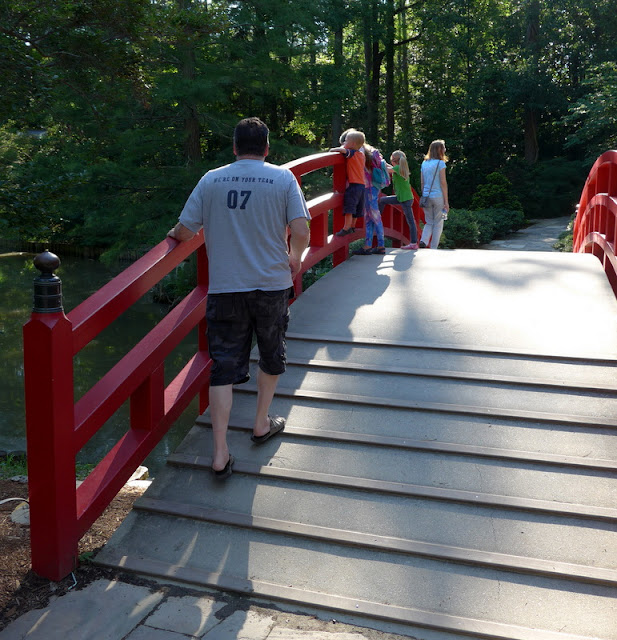 Before this week, I have never seen my dad wear shorts. I've seen him wear swim trunks, but I've never seen him walk around in public in anything other than pants. I didn't even think he owned shorts! Apparently he hadn't (at least not in my memory) until this trip.

When my dad walked out of his room wearing them on Wednesday morning, Benjamin sized him up and said, "Nice shorts. I like 'em!" They're in a camo print. Benjamin has a thing for camo. 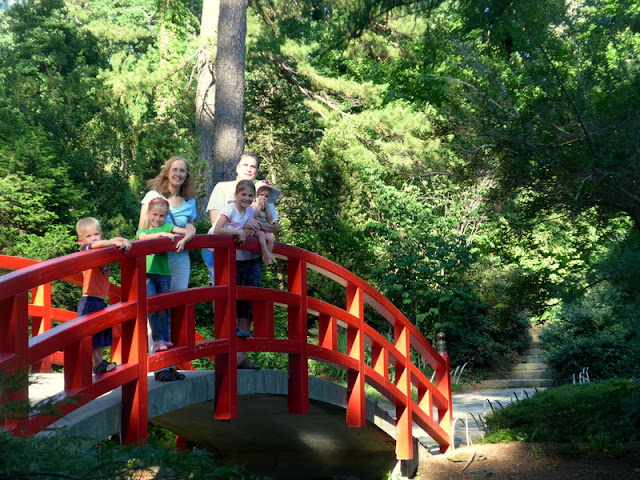 About this point in our tour of Duke Gardens I texted Andrew to tell him that we were finished because we'd planned for him to pick up the van where we'd parked it (closer to Sanford/the chapel) and come pick us up at the garden. So I texted him to tell him we were ready to meet him...and then couldn't find my way out of the garden!

Obviously we eventually did, but the garden can be a bit labyrinthine in places and we didn't have a map. I always run across people in the garden carrying maps, though I have never figured out where they find them (probably at the main entrance, which we've never used). Then I remembered that I have a cell phone, so I looked up a map but I was so turned around that I can only say that maybe the map helped us find our way out and maybe it didn't.

At any rate we were happy to stumble out of the garden and onto Flowers Drive just in time to see our chariot van drive up. It was quite a lot of walking and sunshine, but it was fun to get to do it with my parents!
Posted by Nancy at 11:30 PM