Monday was a rather drizzly kind of day. I taught swimming lessons in the morning and we got poured on. A little rain means little when you're planning on getting wet anyway. Just as we decided to finish swimming the rain started letting up...but then it started thundering. We were able to go to the museum on the afternoon, which was good because my arsenal of quiet indoor activities was nearly depleted and the kids needed a good romp around. When Tuesday ended up even more rainy I thought I might pull my hair out.

But then I saw a picture a friend had posted of her son marbling some paper and *presto!* a bicker-free afternoon commenced. (Thanks, April!) The method they were using seemed a lot more involved (like, they had an actual tray of liquid, which seemed less than ideal with Benjamin around) so we went with a method that I used in my childcare class in high school—shaving cream! Which, by the way, we happen to have quite a lot of.

Every time Andrew comes home from grocery shopping he seems to bring home a can or two. "They keep giving us coupons!" he claims. "Great! But, hypothetically speaking, we're moving in a year. How much shaving cream can you use in one year?" I keep asking.

As of Monday we have one less can to use. Not that I'm counting down to moving...but we seriously have so much shaving cream stored in our bathroom. It's getting a bit ridiculous.

Anyway, I guess it's technically shaving gel, which meant we had to lather it up ourselves, which the kids didn't mind thoroughly enjoyed. Ideally this project uses actual shaving cream, which I guess comes out pre-lathered. Confession: I've never exactly used shaving cream...so...

Once our shaving gel was nice and foamy we added some food colouring, swirled it around... 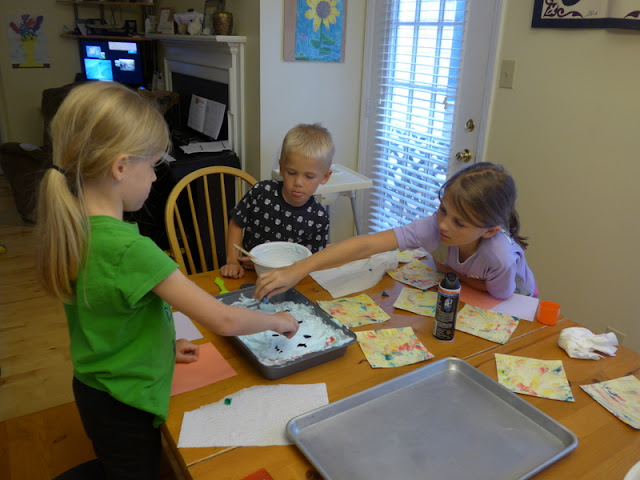 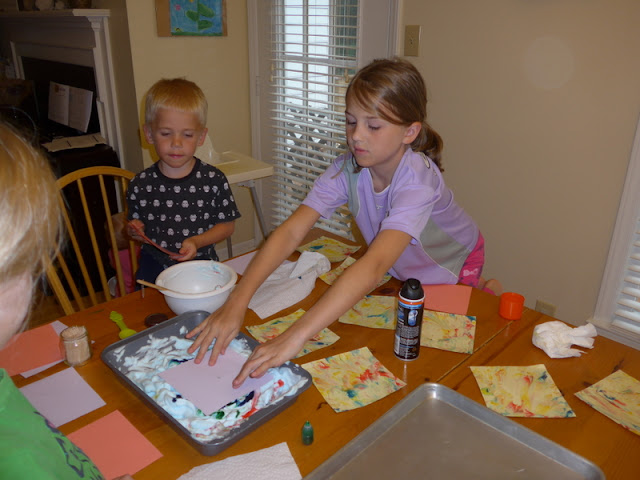 ...and then scraped off the extra shaving cream. 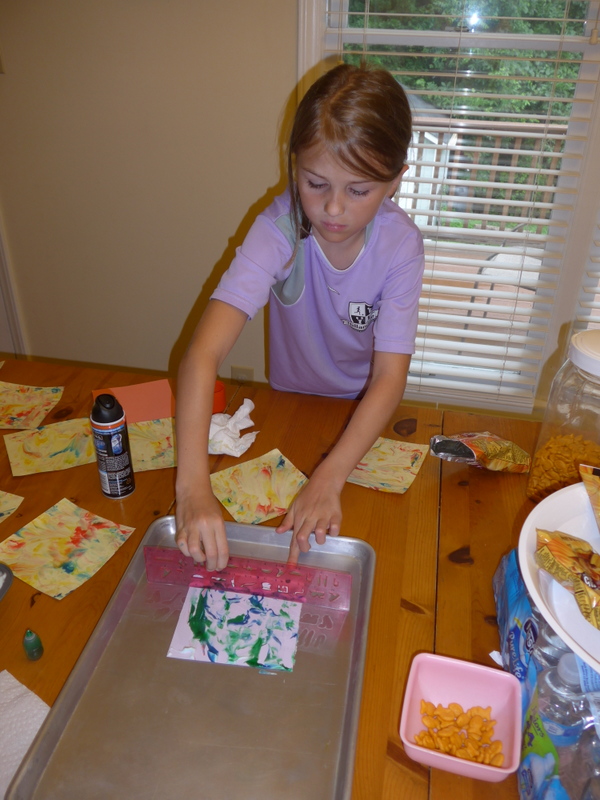 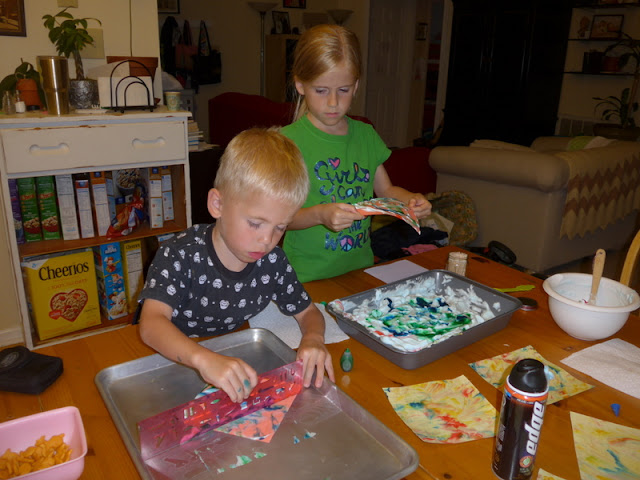 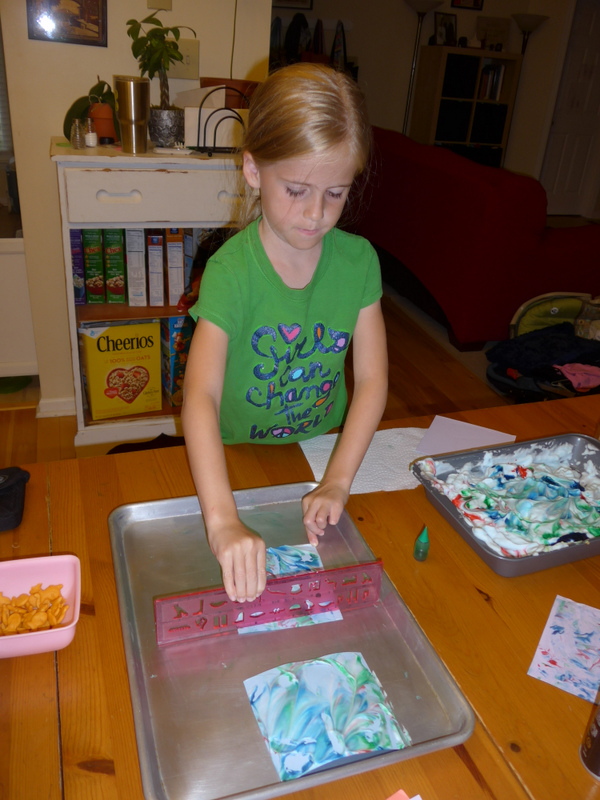 We also watched a few YouTube videos about marbling (specifically this, this, and this).

Here are some of their finished products: 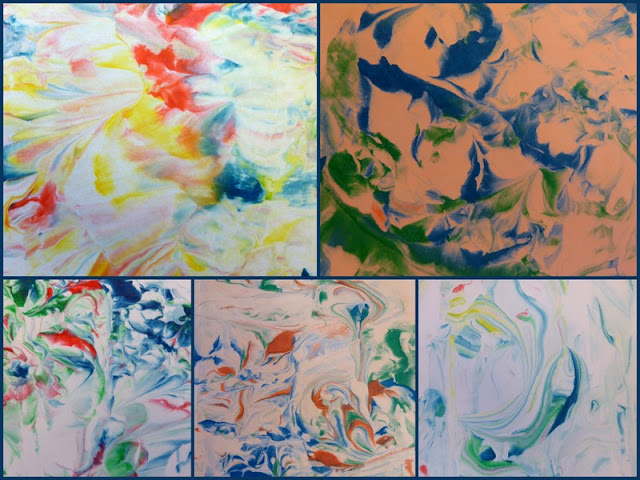 We cut a few papers into strips and "laminated" them with packing tape to make bookmarks, which was exciting. My little bookworms are always excited about new bookmarks!

It was fun to do this on Tuesday, as a bit of a tribute to Turkey (which is a wee bit famous for its paper marbling). It's a strange coincidence that I was already thinking (rather fondly) about Turkey at pretty well the exact same time a terrorist attack was going on at the Istanbul airport.

All of a sudden I haven't been to Turkey for ten years (not counting the layover we had on our way out of Egypt). I can honestly say it doesn't feel that long ago. Also, I think this is one of my very favourite pictures of me and Andrew together, back before selfies were cool... 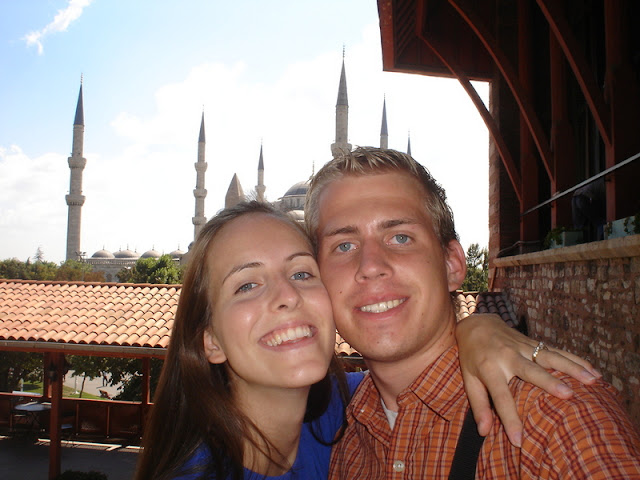 Auntie Emily pointed out that I look notably less exhausted. This picture was taken before we had children, obviously! Back when I didn't have to worry about coming up with rainy day activities for fear my house would implode if I didn't. Back when there was no one to wake me up every two hours demanding to eat (still!). Back when we could pack for a weeklong trip through the Middle East (we also hit up the UAE on this trip, before doubling back to Amman to pick up the rest of our luggage) in one little suitcase—for the both of us!

Our neighbour saw us unpacking from our beach trip with our parents and remarked, "It must be like traveling with the circus!"

So, yes, this picture was taken before the circus. And I might look a little bit worn out from running the circus, but it is my circus and I love it.

And I also love Istanbul. It's such a beautiful city. I'm so, so sad when tragedies like this happen.

Those terrorists need to find a better way to fill their time. Perhaps they could try actually making the world a better place instead of running around blowing stuff up. Maybe. It's worth a shot.
Posted by Nancy at 12:43 AM