We had a wild day today, starting with Trading Tables, which is usually something I enjoy putting together. No, no. Enjoy is too strong of a word. I don't mind organizing Trading Tables but it's kind of a big job. It can be enjoyable when a lot people pitch in to help with set up and clean up, but when help is sparse it just feels like a lot of work.

I realize that I volunteered to do this and, like I said, I don't mind doing it because I appreciate the merits of the activity. But this time around it was one of the "a lot of work" times. Sometimes I feel like I barely have to lift a finger because I have so many happy helpers. Today our little family lugged stuff into the gym (not just our stuff; others' stuff, too) and set up tables all on our own. My friend Emily arrived and helped put up signs and helped sort stuff, and soon other people arrived to help sort things. But that was all the help we had setting up.

Several people helped pack stuff up, but most people left without helping at all. It ended up being our family, a family from another ward (who are always so great about staying to help), and a friend from the musical (also not from our ward), who stayed until the end and volunteered to take a load to the Durham Rescue Mission. We had so much stuff left when everyone was gone that we couldn't even fit it into our van. We had to leave a bunch of stuff in a classroom and come back for it!

But, I did find some good hand-me-downs for Benjamin. He and Rachel are the two I have trouble keeping clothed in hand-me-downs, though I might have to add Miriam to that list in a couple of years because Rachel got holes in every single pair of pants this year! Every pair!

She came home from school a couple of weeks ago with a hole in the knee of her very last intact pair of jeans, saying that she tripped at recess and though her knee is fine...but her pants were not. *sigh* There goes another pair of pants.


Anyway, there's not ever really anything for Rachel, but we did find a cute dress she said she'd wear and, like I said, we were able to pick up a few outfits for Benjamin to grow into, as well as a few new books to shake things up, and a sit'n'stand stroller.

So, it's not like we got nothing out of it. I also picked out some things to take to World Relief for refugees being settled in the area—some cooking supplies (measuring cups and a casserole dish and things like that) and some blankets and clothes. World Relief takes their surplus to Durham Rescue Mission, where is where we drop our surplus as well. I almost wish I could just have refugees show up at Trading Tables to look through things on their own...but I don't know how to organize that.

My friend Hayley is so good at stuff like that! She's so in-the-know in her community, rubbing shoulders with newly-arrived refugees and literally helping them set up houses. I don't know how to do that. But maybe I can figure it out...

I feel like I would rather have people 'shop' for free than go to a second-hand shop and spend good money for things other people no longer wanted.

I often see articles about not giving "crap to the poor," and while I understand the idea behind that—and the article I linked to even said that cleaning out our houses to get rid of old clothes and toys is not bad—I also have a hard time with that advice because sometimes I am so thankful for...other people's crap.

Just the other day I hand-stitched the skirt of a little play dress to the bodice for Zoë. It's a dress that I picked up at Trading Tables a few cycles ago. It's a dress that a friend brought and when I picked it up she acted all embarrassed and whispered, "Oh, I brought that. You don't want it. It has a huge hole in it!"

To her it wasn't worth fixing and was no longer something she'd consider dressing her children in.

To me it looked gently used, having only come apart at the seam, and I was only intending to use it as a play dress (not for afternoon tea with the queen) so I didn't care if it wasn't perfect.

I've been on the other end of the spectrum as well, when we brought Miriam's much-loved and heavily-used bright pink boots to Trading Tables. She insisted on wearing them everywhere and with everything, but they were looking really shabby. We started getting into fights about where she could wear her boots.

A walk in the woods? By all means. Story time at the library? Choose something else to wear.

She never wanted to choose anything else and refused to accept that they were so worn out that they were only worthy of stomping in the mud with (not for afternoon tea with the queen). Fortunately, children grow and when they started to get a little bit pinchy in the toes I threw them in the give-away pile and secreted them away to Trading Tables where I noticed another mom pick them up and exclaim, "Pink boots! Sweetums will love these!" and she tucked them away to take home with her.

Obviously Sweetums wasn't that pink-loving girl's real name (I can't remember what her name is and I don't even know the name of her mother), but I'm sure she was really happy to get those boots and she probably wore the crap out of them. I'll bet Sweetums' mother never had to fight with her about whether or not to wear those boots to church because, for Sweetums, they were never in good enough condition to consider wearing them to church. They were probably her stop-around-in-mud-puddles boots. And they were probably perfect for that.

I imagine that, having gone through at least four children (my niece, two of my girls, and then Sweetums) it's likely they ended up in the trash when Sweetums was done with them—and that's totally fine. Miriam just finished destroying a pair of boots that we picked up at Trading Tables a while ago—they went from used-but-still-cute-enough-to-wear-to-church to fine-for-school to only-for-playing-outside-with to being part of her costume for her role as a sewer child in Chitty Chitty Bang Bang.

It was then—when they had reached "sewer child" level—that I realized they had probably fulfilled their purpose and were ready to retire. Their velvety exterior had rubbed off and then peeled off the toes. The rubber on the sole had worn away, leaving holes in some parts, and was also peeling always from the rest of the boot. They were muddy and stinky and worked really, really well for a sewer child costume. I wouldn't give them to my worst enemy at this point, so they're going in the trash.

All this is to say that everyone has a different idea of what "crap" means. If something's really crap then, yes, someone has to get rid of it (like, giving away broken appliances is lame, for example—just throw them away yourself). But as a "poor" person (I'll be the first to admit that my experience in poverty has in no way been extreme; in fact it's been rather gentle (still, we sit below "the poverty line" and have for at least ten years, so...)) I'm not very picky about hand-me-downs. My kids are going to put those clothes through a lot of experiences which will add the the untidy nature of their wardrobe so why should I be picky about a little fleck of paint on a pair of pants?

(To that end, I appreciated the line "I don't minister to laundry" from this post (although I'm not sure I agree with all her tips, that one in particular I think I will cling to for the rest of my life (as well as a lot of her other advice))).

Anyway, that was a lot to say about Trading Tables. 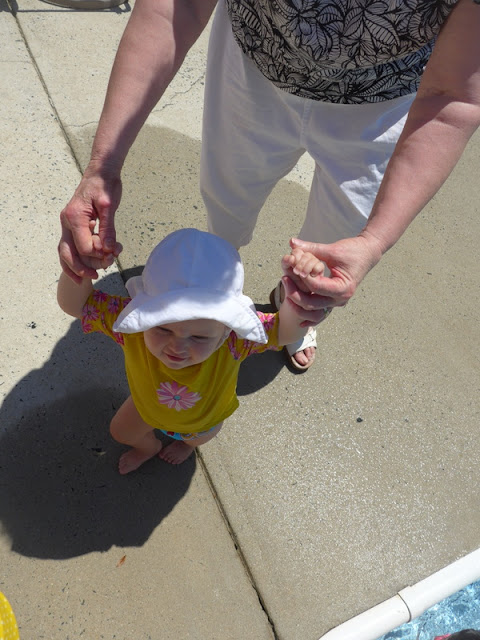 From there we went to a pool party at Rachel's primary teacher's house. The kids had a blast! Someone brought a big doughnut floatie to Trading Tables and the kids enjoyed jumping into the middle of it. 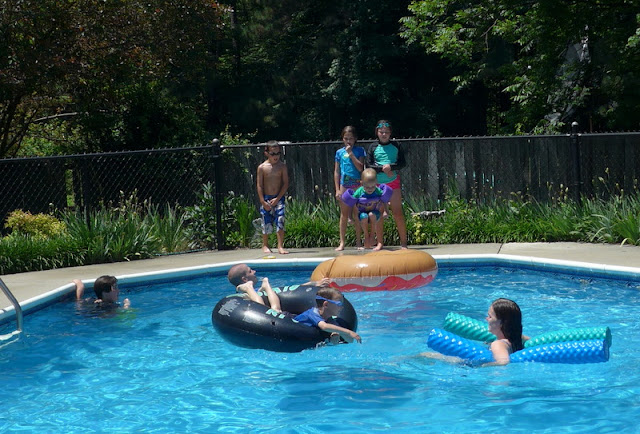 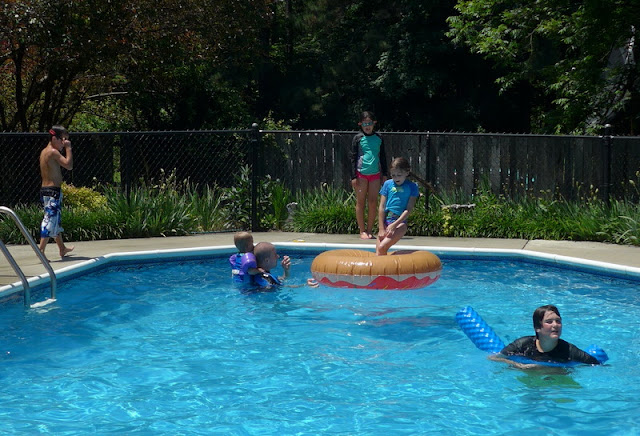 Except for Miriam, poor gal. But her ear finally seems to be getting better so...soon!

After the pool party we went back to the church to pick up the last of the Trading Tables stuff, dropped it off at the Rescue Mission, went to Barnes & Noble to get a free book for the kids, and then went to pick up a few things from Costco, returning home just in time for dinner.

"Can we go to the pool?" Benjamin asked as we were finishing up dinner.

So I took the three little ones for a pre-bedtime swim (being so careful of Miriam's ear), and then showered them all off and brought them home for bed. Rachel didn't want to go swimming again; I guess she wore herself out from swimming so hard this afternoon. She and Daddy cleaned the kitchen and tidied the living room while we were out.