My parents arrived late last night, after being delayed for several hours in Las Vegas (due to a damaged plane; a new one had to be flown in to replace the plane they were supposed to be on). It was like waiting for a snow storm; the children were wild with anticipation. Amazingly enough half of them were asleep by the time my parents arrived (after 11:00 PM), though I swear they were still awake ten minutes before they walked through the door.

They sure were happy to see them in the morning! By the time I woke up, Benjamin was nestled on the couch between Naanii and Bumpa. Zoë took to Bumpa right away and is always happy to let him (or make him) hold her. The girls are both over the moon.

We went swimming this morning. I taught lessons to some kids in our neighbourhood while my parents watched my little brood (it was lovely to not have to multi-task) and then we came home for lunch. In the afternoon we headed to Stagville and tagged along with an already-in-process tour. We missed touring the big house but got to see the slave houses and the barn.

My mom was amazed at how the tour guide could discuss slavery with such nonchalance, as if it were no big deal that it happened. History is hard and complicated; with hindsight we can see that certain practices and attitudes were so, so very wrong. But in the moment they seemed natural, normal, even right. I suppose it is hard to condemn slave-owners as a group; although slavery itself was an evil practice I'm not sure I'm comfortable saying all those who owned slaves were evil people. That brush is too broad. Surely, though, if they themselves looked back at history armed with what we know now they, too, would find their practices disgusting.

The sad thing is that there are wrong practices today that we accept as normal and natural, even right, that we should probably find equally disgusting. Prejudices still abound. Inequality runs rampant. There is hate and fear and a spirit of revenge... But there are also many, many good things about today, about the people of today, so I think that in spite of everything that we will be able to look back at ourselves with forgiveness.

Obviously these tours tend to get my blood boiling as well as my mother's.

Anyway, here's a picture of my dad with Zoë: 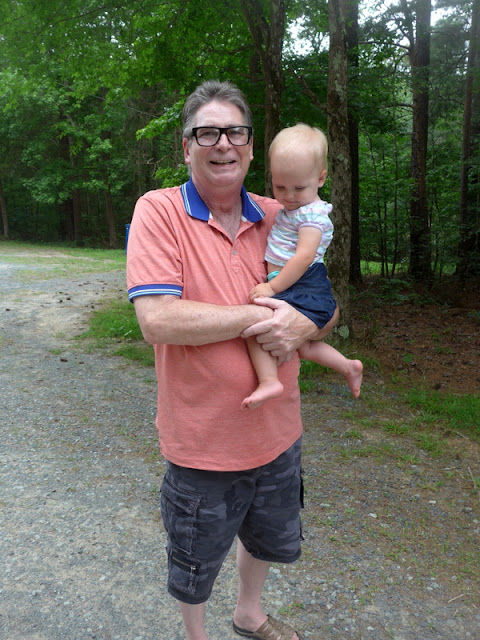 And here are all the kids with Naanii and Bumpa by the great barn: 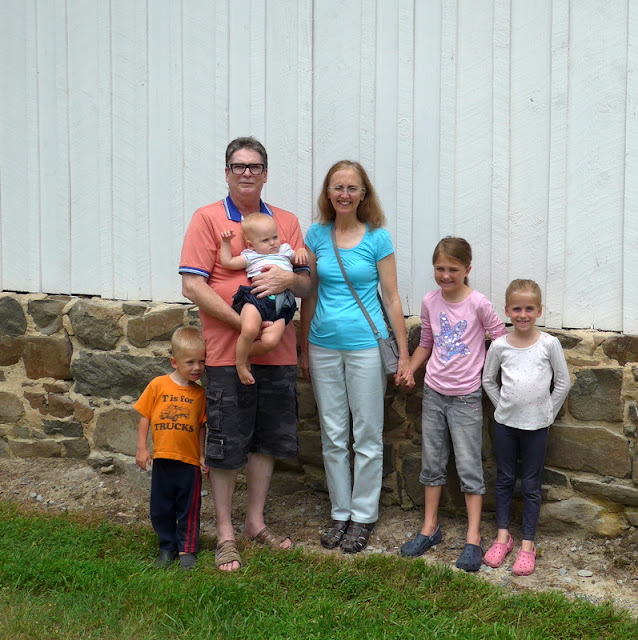 Zoë let Naanii carry her for a little while (mostly she wanted to get down to explore everywhere but we tried to keep her up as much as possible): 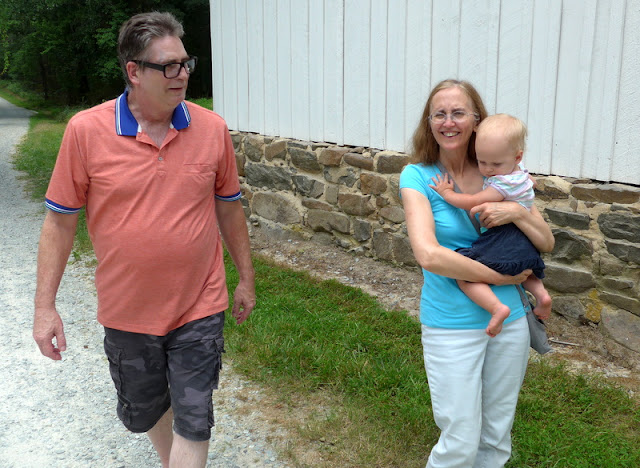 And back with Bumpa again: 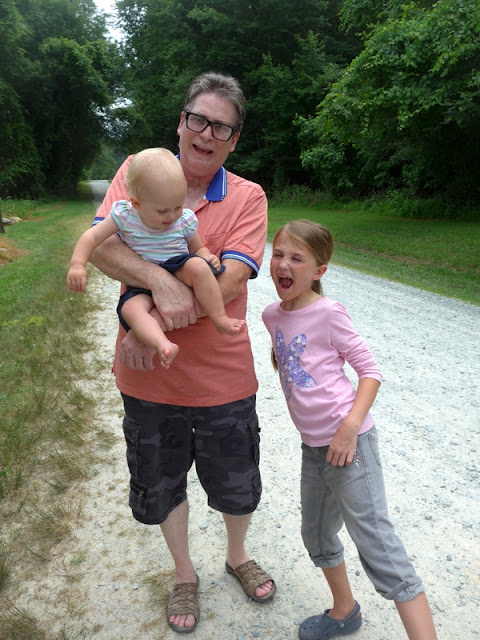 He took Zoë on a little stroll while the rest of us were listening to the lecture about the barn because she was feeling hot and restless and wanted to get down (but the floors of the barn are dirt and I didn't want her crawling around in that). We found them at the side of the barn after the tour. Benjamin and Miriam were climbing on a rock and Naanii thought that would make a cute picture but I saw a big ol' spider wasp in the grass and warned the kids about it. I didn't want them to accidentally step on it and make it angry, but it spooked them and they quickly climbed down to stand by the grown ups.

We stood and watched the wasp for a minute. It was acting so vengeful, so purposeful, which is part of the reason I didn't want the kids to bother it. And then we saw it pounce on a huge spider (its abdomen is probably about the size of my thumb (and we all know that my thumb is huge)), which it quickly paralyzed and then began hauling off to its nest. I don't know where its nest was, but it was a considerable distance from its prey. We watched the wasp lug the spider for several feet before we decided to leave.

It's going to lay an egg on that spider and when the egg hatches the larva will consume the spider. Delightful. We thought it was a rather pretty wasp, with its reddish body and its iridescent blue wings, but apparently it packs a punch. Its sting is rated as a 4 on the Schmidt pain index (that guy is crazy, I'm sure of it (there is no way you could get me to study stinging insects the way he studies them (by making them sting him!))), which is about the highest you can get. According to Wikipedia, "the sting is described as 'blinding, fierce, and shockingly electric. A running hair dryer has been dropped into your bubble bath.'" See? They're delightful creatures.

I'm glad no one accidentally annoyed it!
Posted by Nancy at 7:33 PM