Our morning started with snuggles, of course. As much as Benjamin and Zoë fight, they sure do love each other. They can't start a single day without snuggling together. 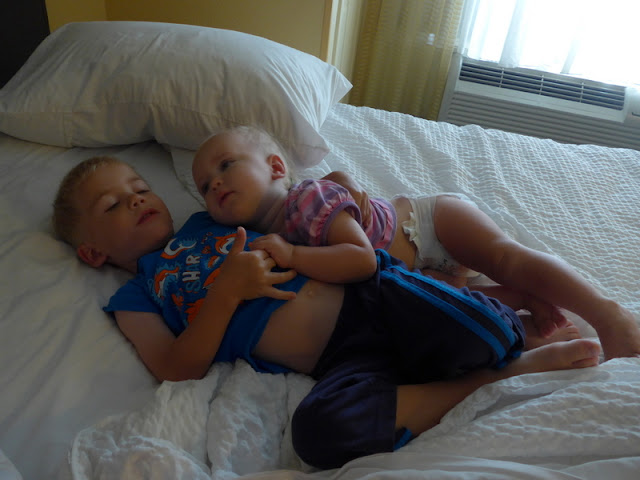 After we had breakfast and had packed everything up, my mom and I took the kids up to the top floor of the hotel so that they could look down. Benjamin had been so excited to go to the second floor of Daddy's office building. I thought for sure he'd be even more excited to be on the fifth floor. He wasn't as impressed as I thought he would be, but seemed to enjoy it. 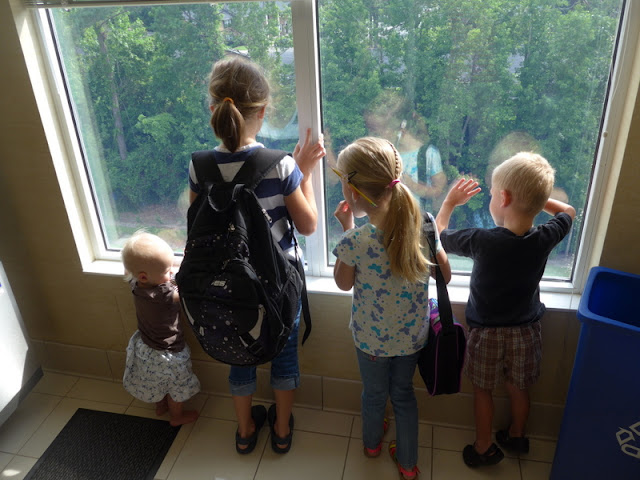 They were in too much of a hurry to get back downstairs so they could have one last ride on the luggage cart to enjoy the view much, I think. We got to the parking lot just as Andrew was finishing packing the van. 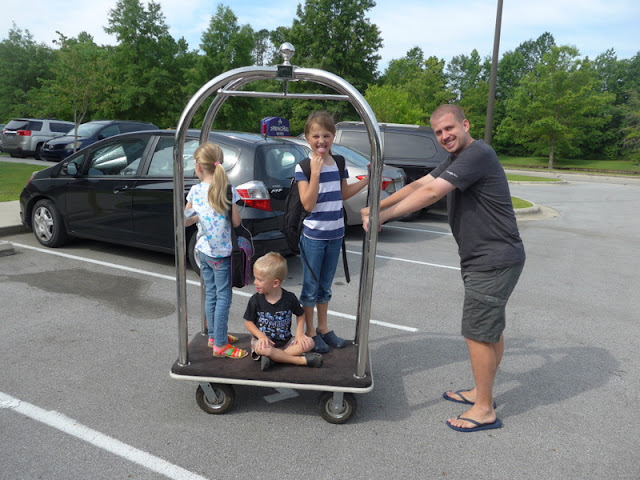 Even Zoë joined them for a ride (but she fell off the cart, of course): 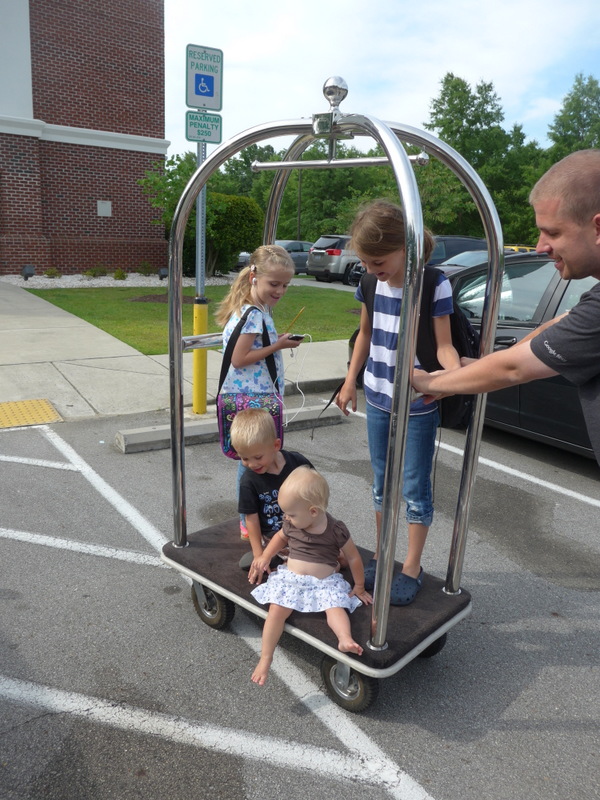 We had a fun time at the aquarium. Keeping pace with Benjamin was a little bit of a challenge. We had to breeze through some exhibits but spent longer than some people wanted to at other exhibits. Benjamin only wanted to find the outdoor playground and see some sharks, so that's mostly what we did.

Here are a few pictures from the first half of the aquarium: 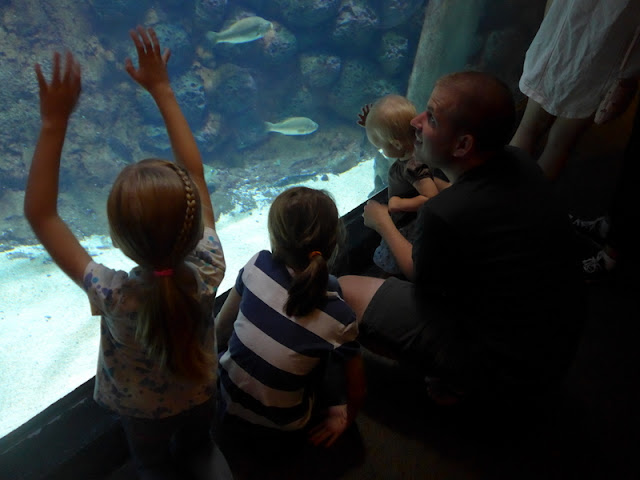 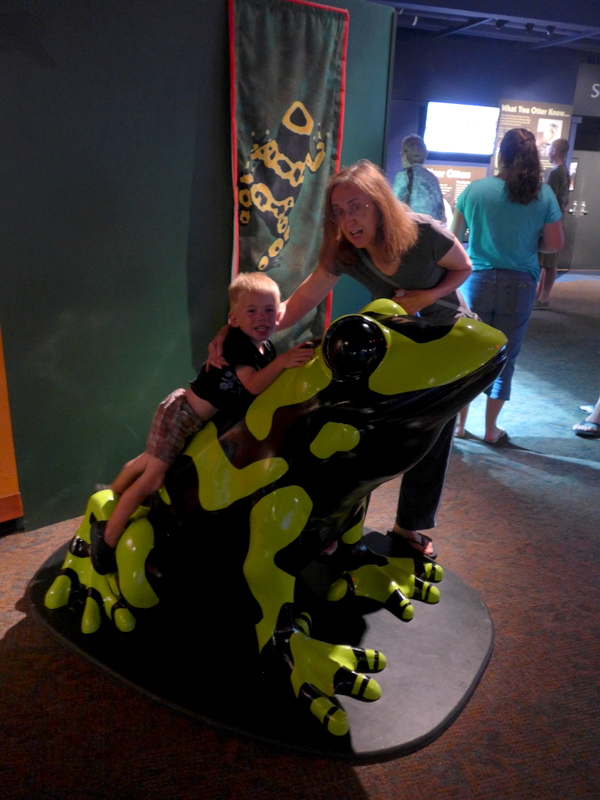 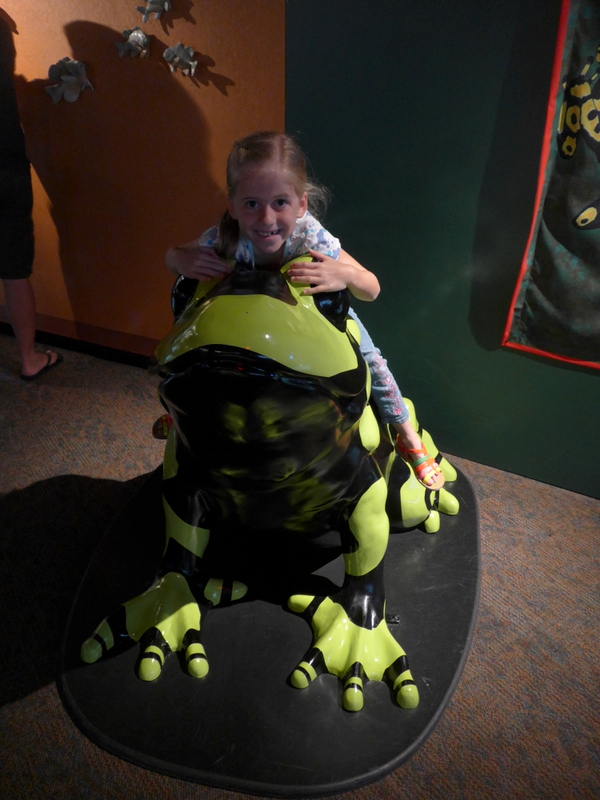 Our time at the playground: 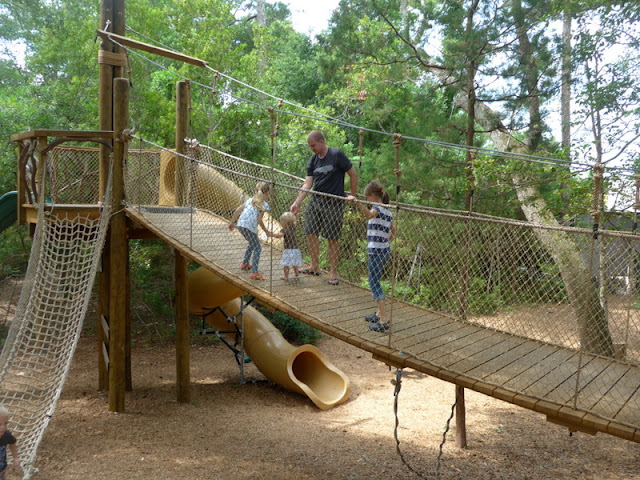 Poor Zoë wanted to get back down so she could play with the big kids. 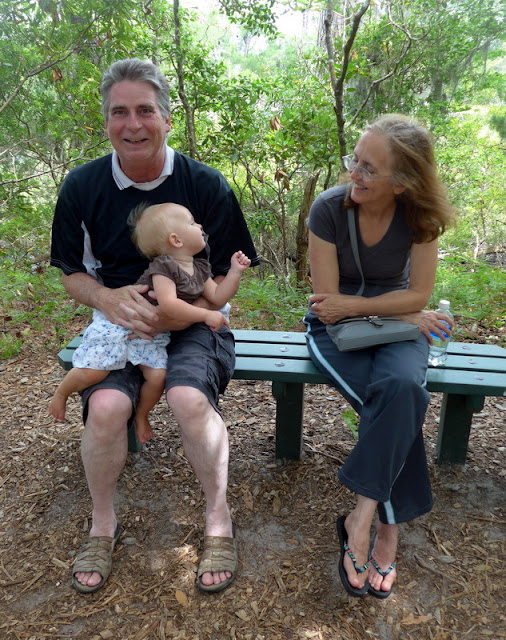 Andrew had taken them over to the tire swing, though, and they were getting quite a wild ride, so instead of getting to play with them she had to sit on this alligator: 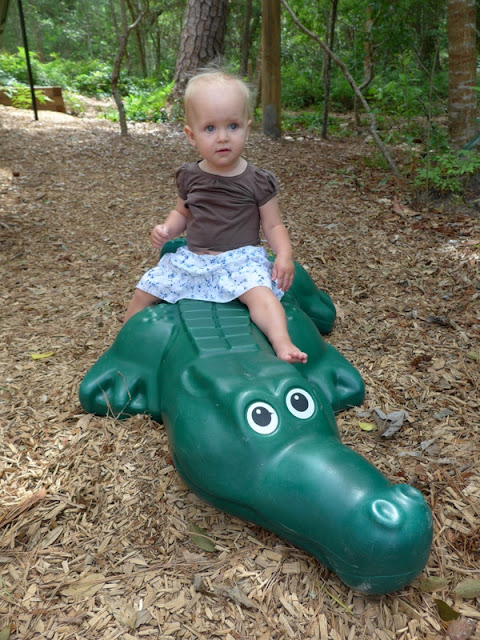 Back at the inside exhibits once again... 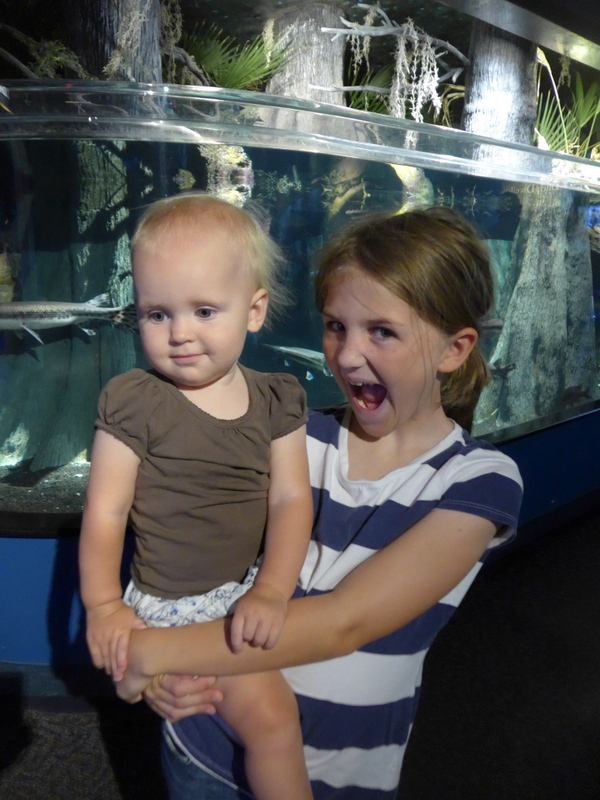 Here's everyone at the ray petting station: 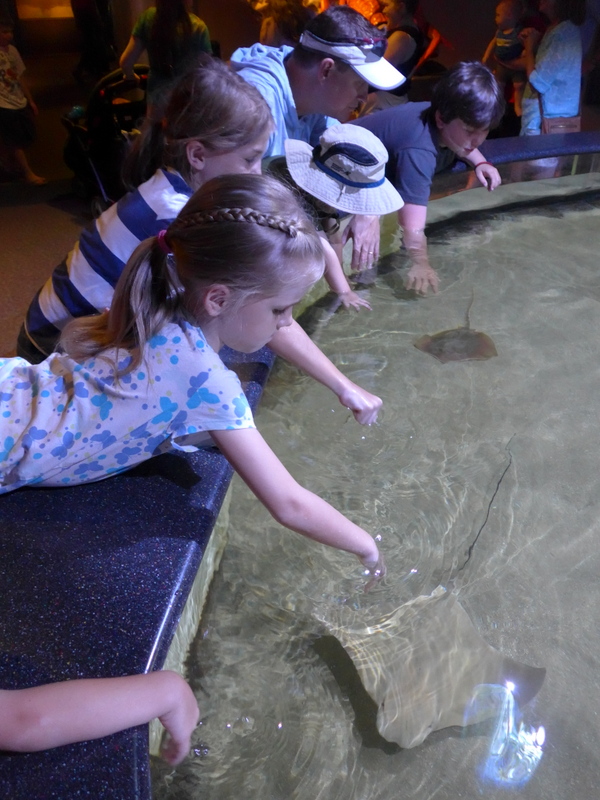 Zoë quickly dipped her hands into the water and then started licking them off. She wants to sample every bit of water that she comes across. Her immune system is going to be on point! 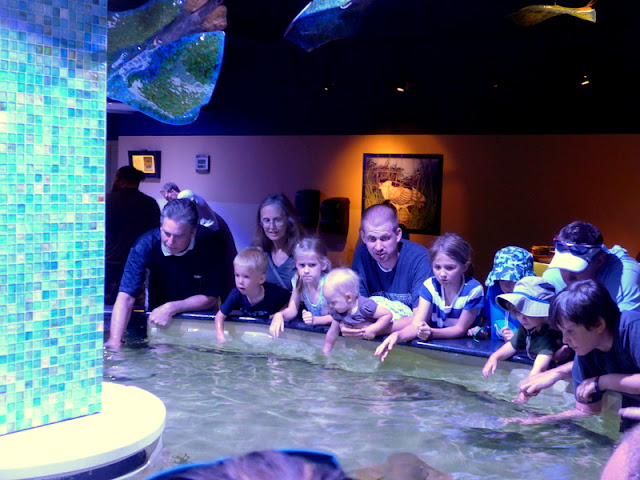 Here we are at the big viewing area. Benjamin was impressed by these big fish, which I didn't take the time to identify because I was too busy stressing out about not losing anyone: 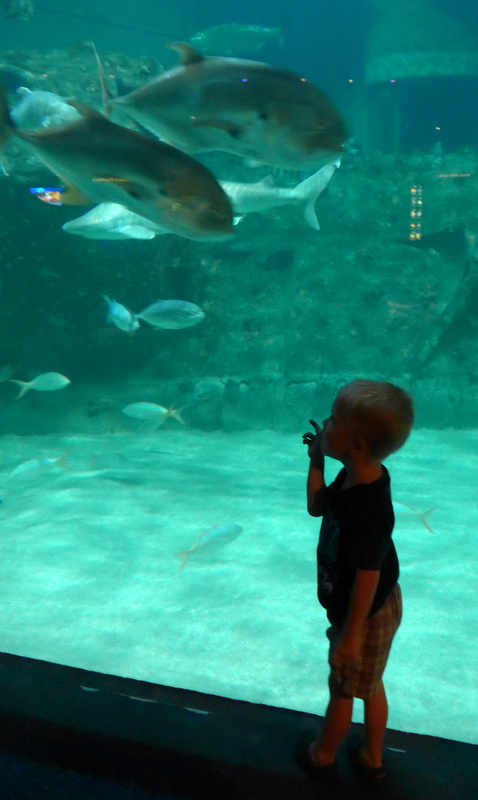 And here are the girls looking at what I know for sure is a sea turtle: 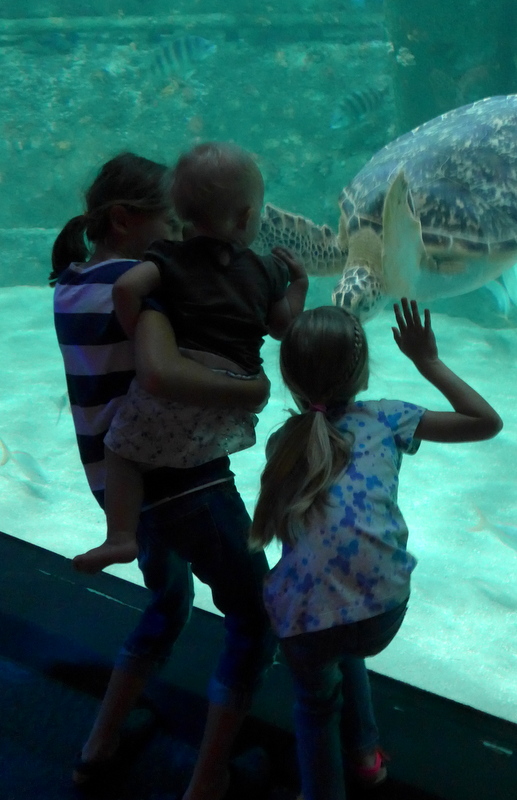 My mom and I spent some time in the kid zone waiting for a few of the grown ups to catch up (Andrew experienced a sudden massive bloody nose and my dad disappeared somewhere as well). The kids—most especially Benjamin—had fun dressing up and playing around. 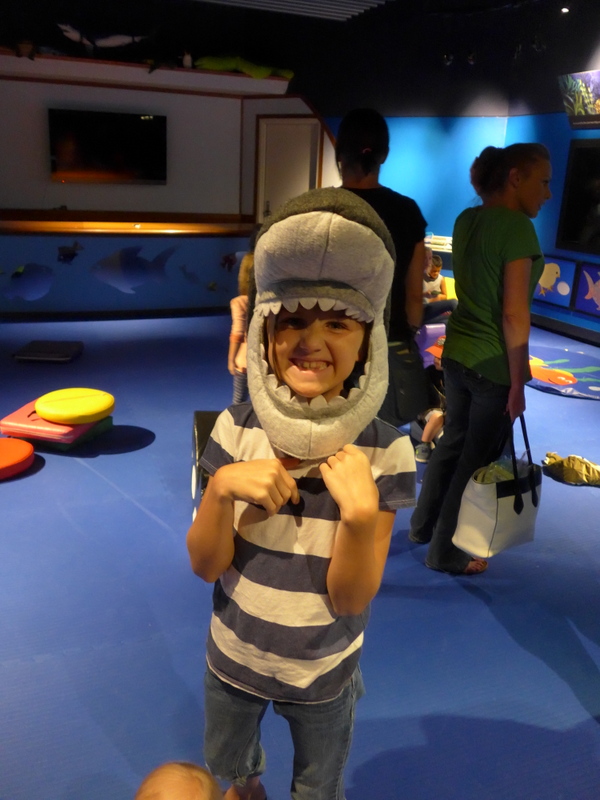 Zoë, who ordinarily loves trying on hats was having none of the costume shenanigans this day. Instead she rode on this orca: 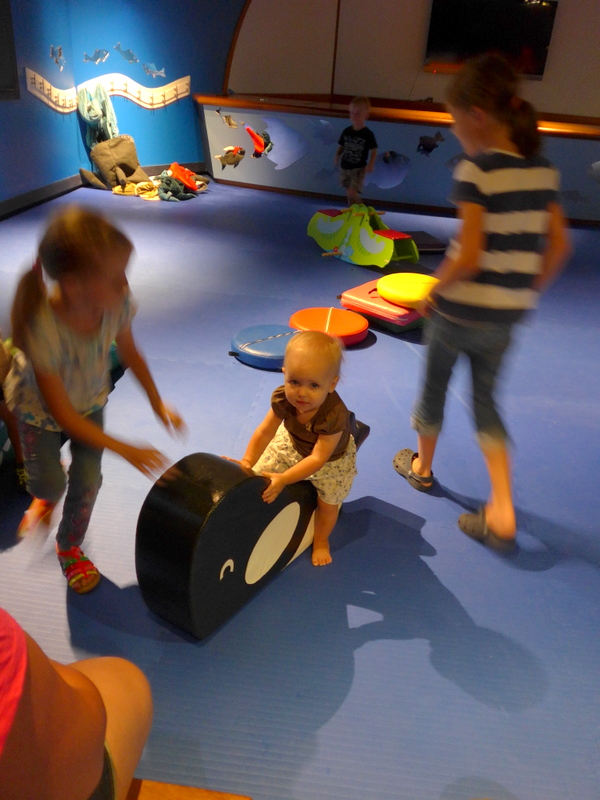 I missed grabbing a picture of Benjamin dressed up as a sea turtle, but here he is in the full shark costume: 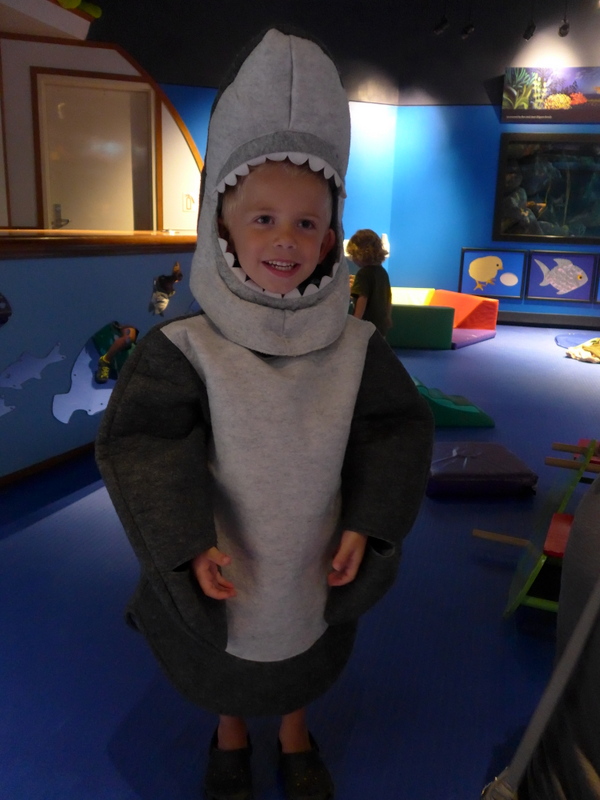 And here he is attacking Andrew, who'd just rejoined us: After we were finished playing we had to take some obligatory megalodon jaw pictures, naturally. 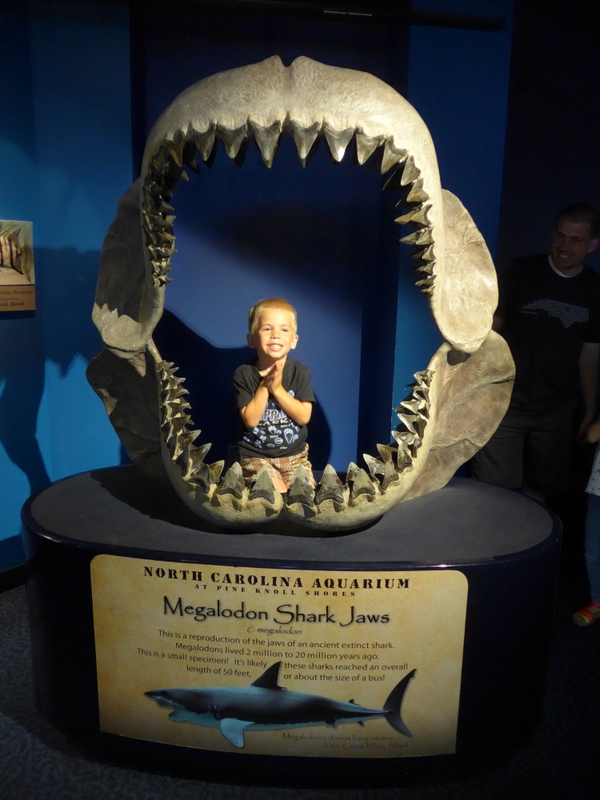 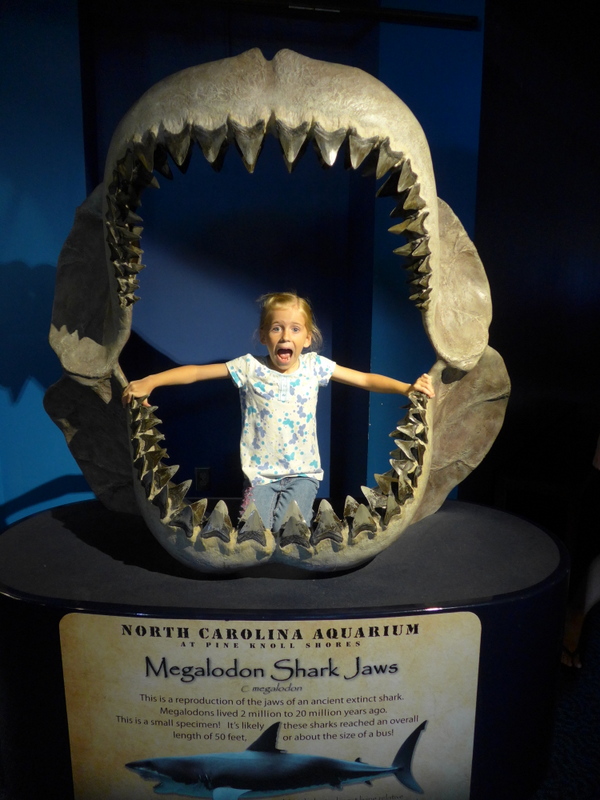 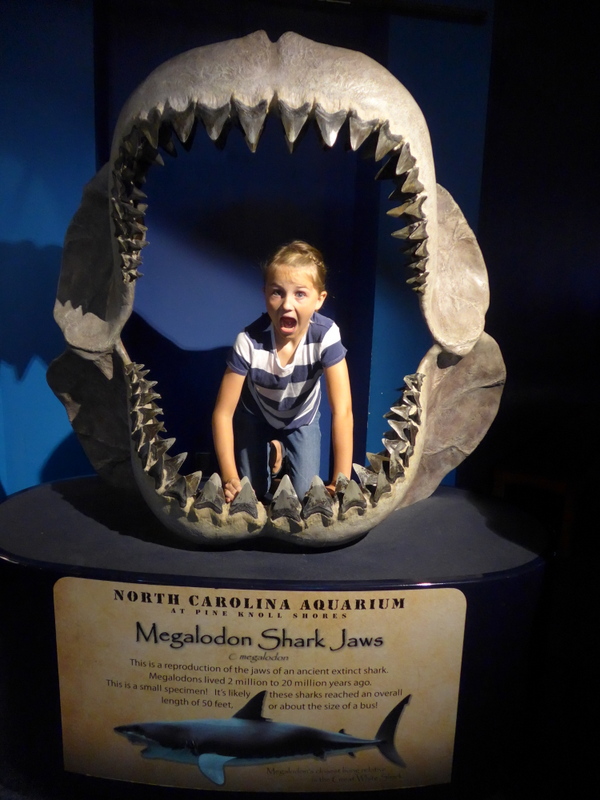 And Naanii with Zoë (who wasn't about to let any wee part of her touch those huge teeth; see how she's pulling her feet in—she was so scared): 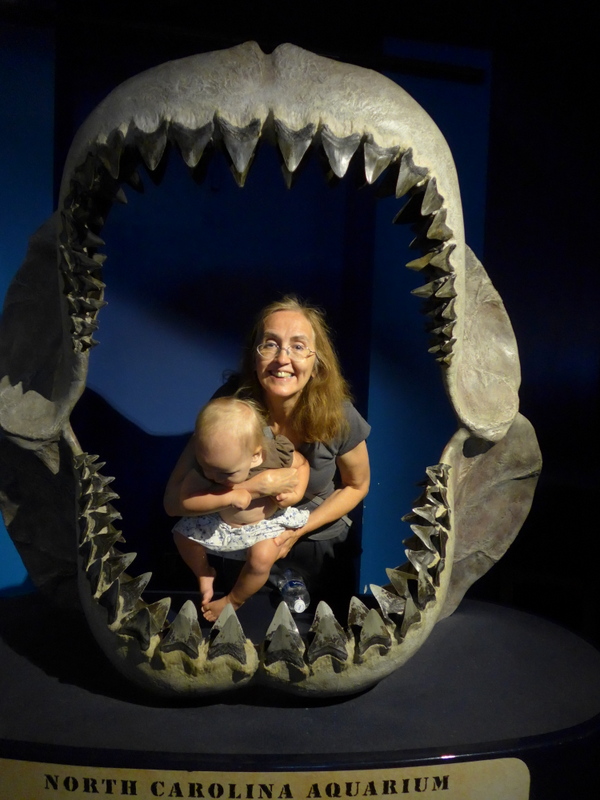 The kids enjoyed the sea turtle rehabilitation exhibit. They had little plastic turtles that you could take around to clean and feed and so forth before releasing them back into the ocean.

Here's Zoë looking through one of the rehabilitation tanks: 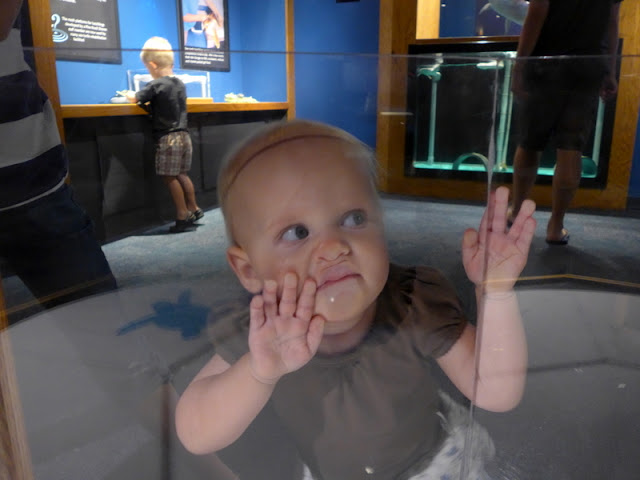 And here's Andrew threatening to release Rachel back into the ocean (which was really just a bin on the other side of the wall): 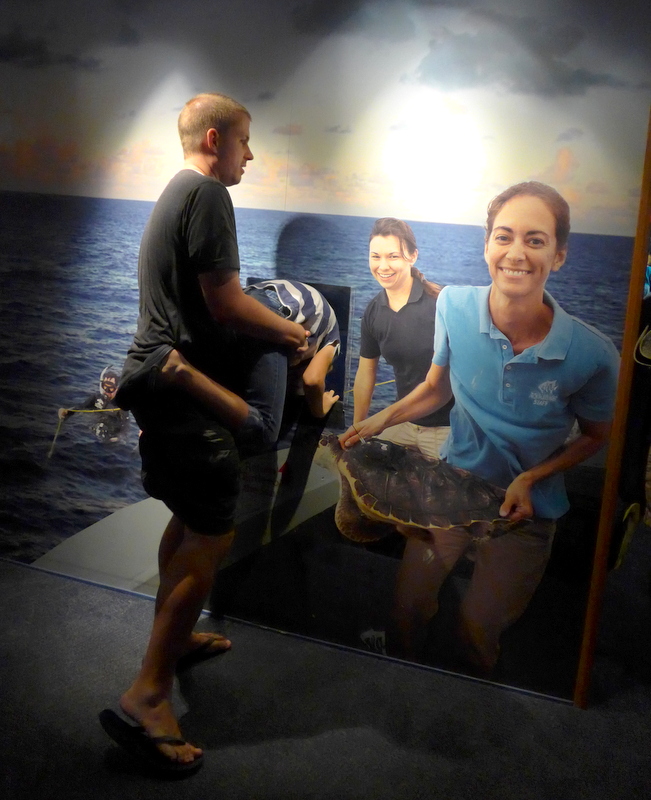 Miriam borrowed the camera and took a few fun shots as well. One of an actual turtle: 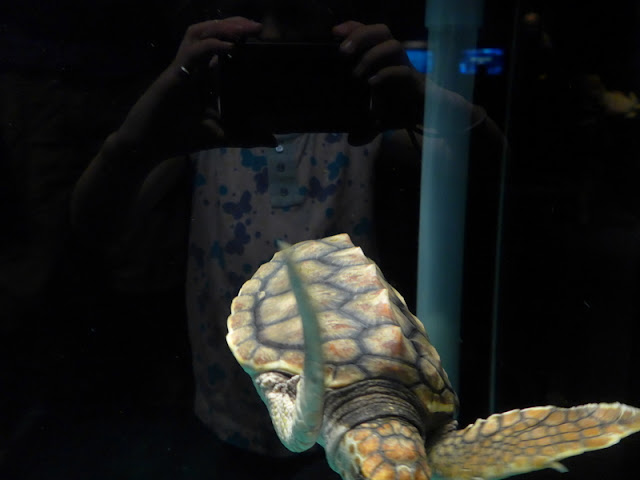 And one of Benjamin not wanting her to take his picture: 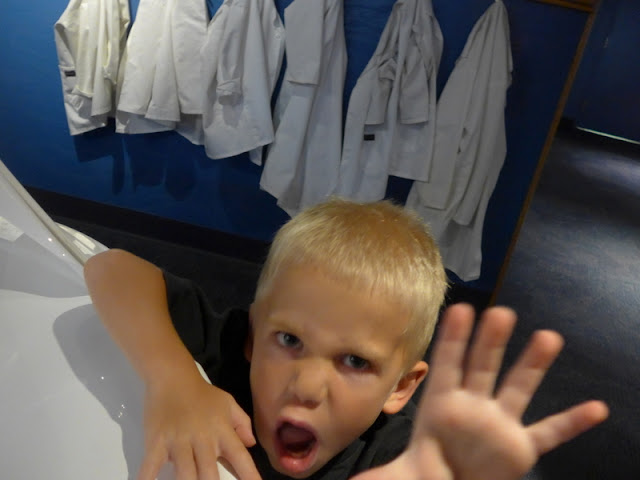 After the aquarium we bid farewell to the coast, at least for now. Benjamin's already aching to get back and after church today he got all packed up to go to the beach "one day." So he's right ready to go whenever the opportunity presents itself.

We stopped by Camp Lejeune to take a few pictures of my dad, who was stationed here before he got married: 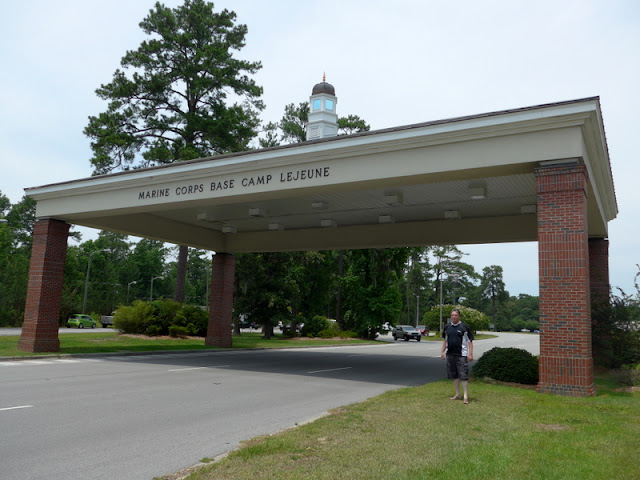 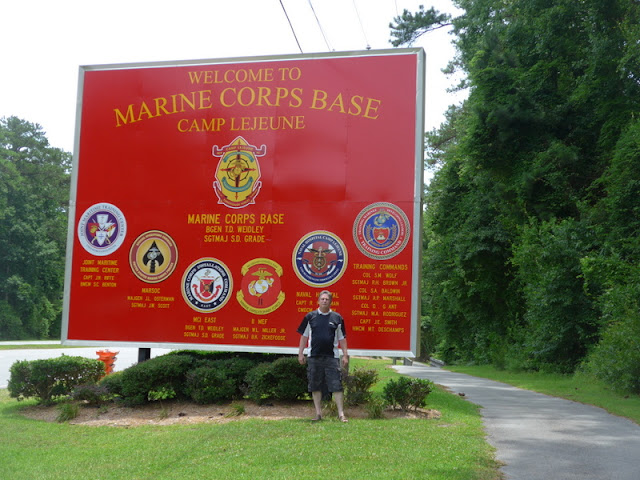 After a quick pit stop for some food we headed straight to the airport. It was kind of crazy going straight from the beach to the airport, but in a way it was also kind of nice. My parents still had to return the rental car and catch a shuttle to the airport and we had to install the girls' carseats back into the van (they'd been riding in the car with my parents) so we were all so busy that we didn't have time to really break down and cry when we said goodbye (and I always cry when I say goodbye so this was a huge victory).

We're already feeling a little lonesome in our neck of the woods, but my parents were able to earn some travel vouchers on both of their trips so they're planning on sending my little (grown up) sister out for Thanksgiving. The kids are so excited for Auntie Josie to come they're already fighting over where she's going to sleep.

"You can sleep in my room!" Rachel gushed when she heard the news.

"No! Sleep in our room," Miriam insisted.

"You can sleep in my bed!" Benjamin offered.

I'm pretty sure we can set up an air mattress for her though...
Posted by Nancy at 12:03 AM