On Saturday we went swimming with Naanii and Bumpa at our neighbourhood pool. Bumpa hadn't been able to get into the pool earlier in the week because his swimsuit managed to avoid his suitcase. After visiting Duke Gardens on Friday, however, we stopped by the store so he could be properly outfitted with a pair of swimming trunks. My kids practically expect to go swimming every day in the summer, so swimming trunks are imperative when visiting us in the summer.

Bumpa showed the kids the art of squeezing water through your hands to squirt people. 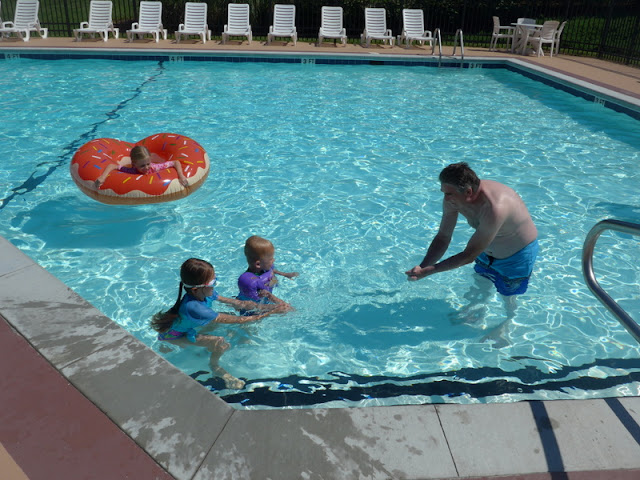 They tried desperately to emulate this trick, but mostly just ended up splashing. 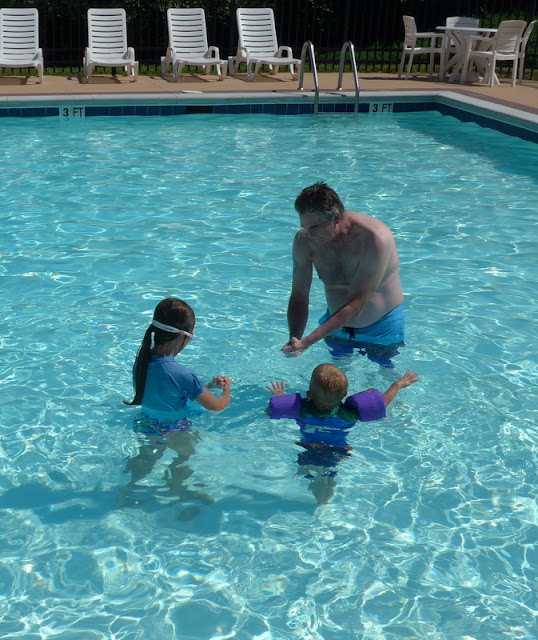 Here's a (rare) picture of Naanii swimming (with the help of a kick board): 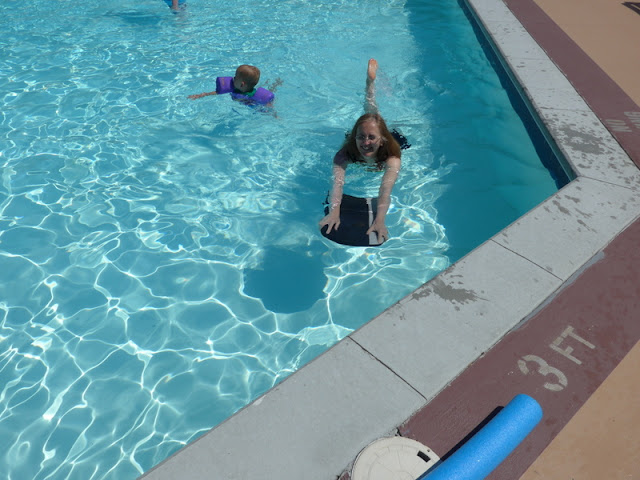 My mom never learned how to swim but she made sure that all of her kids did. A few of us went on to swim competitively, to teach, coach, and/or be lifeguards, so my mom clocked many hours at the pool as we grew up and learned a lot about swimming while she supported and cheered us on. She even went so far as to become a certified stroke and turn judge. But she can't swim a lick!

Andrew and the girls wanted to jump into the pool at the same time while I took a picture. Unfortunately, when I counted to three the girls both jumped down and disappeared under the water. 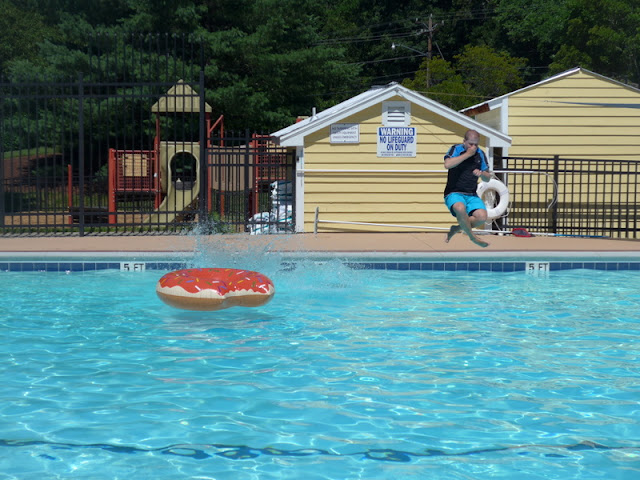 We talked about jumping up so that I had time to take the picture before they landed in the water. Miriam figured out what I meant but Rachel didn't quite get it... 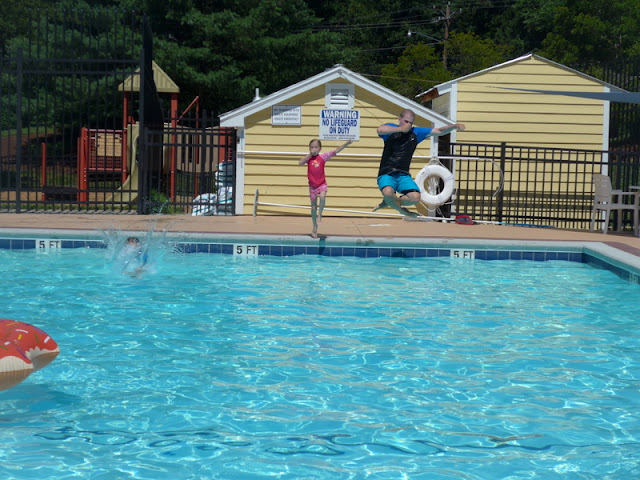 We'll have to try for another shot later this summer.

Zoë enjoyed surfing on the kick board with Andrew. She even tried to stand up a few times. 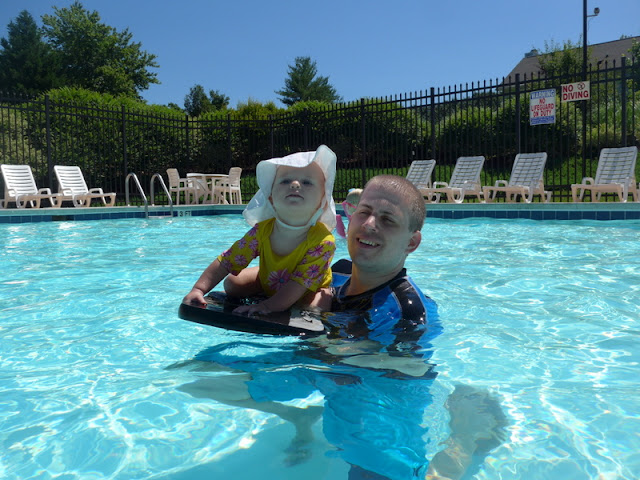 In the afternoon we went to pick up a rental car for my parents because we've run out of extra room in the van! We needed a little more room for our weekend excursion. Once we had the car, the girls went one direction to do some "fun" shopping and the boys went another direction to do some grocery shopping. Miriam found a darling outfit, which we're saving for the first day of school, and Rachel was able to find the perfect pair of jeans. We also picked out some Father's Day gifts.

When we came home Rachel and I rather spontaneously got haircuts. Rachel wanted to keep growing her hair out (even though it was all the way down to her waist) but maintenance had become such a battle that it wasn't worth it anymore. She decided she'd chop off ten inches to mail to a charity.

Here's her before picture: 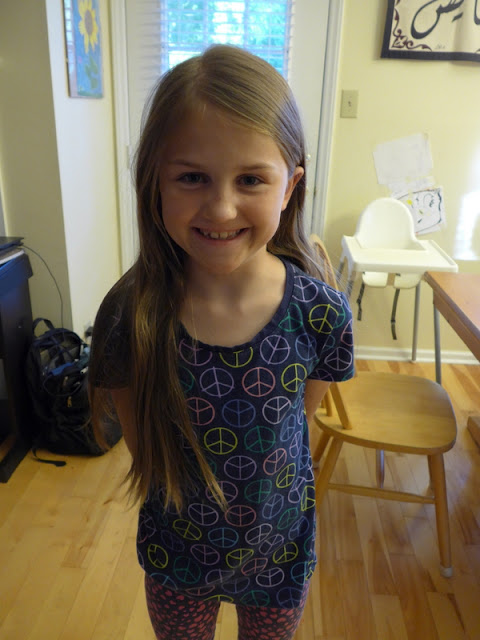 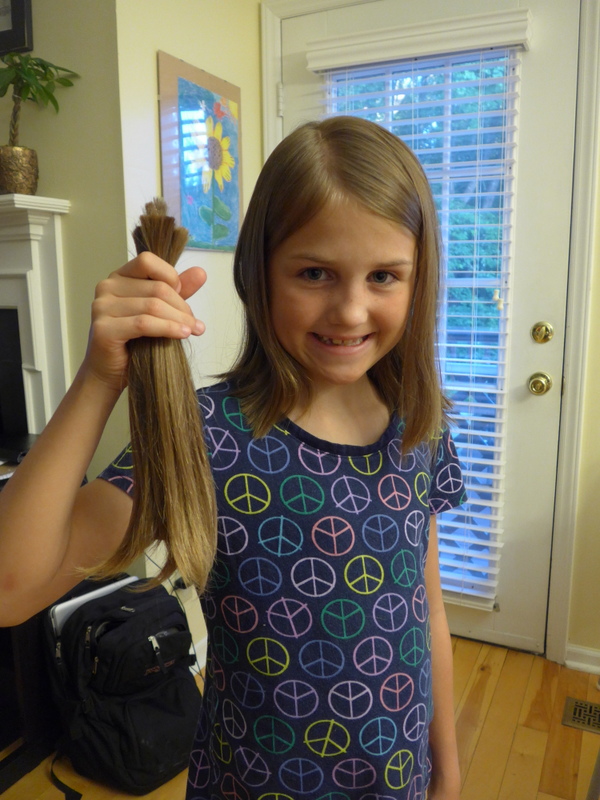 She suddenly looks much older and mature, but I think her new haircut suits her well! Still, it's hard to believe she's a rising fourth grader. Grade four!?!?! How is that possible?

I really started to get sentimental when I pulled out the envelope of hair that I'd saved from Miriam's last haircut (it's been sitting on my desk since August) so that I could add mine and Rachel's hair to it (I cut 8 inches, by the way, which isn't long enough for Locks of Love but is long enough for other
Children with Hair Loss" charities). When I pulled out her silky smooth pony locks of hair I died a little inside. 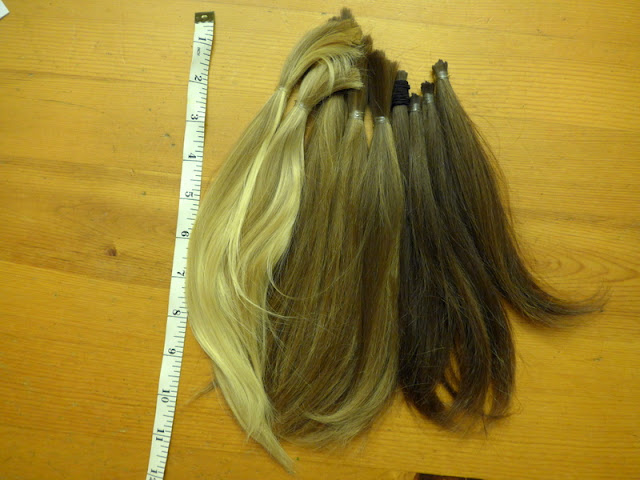 Those long blonde pony tails are made up of her baby hair. They are so soft and silky. I can't believe I was ever coaxed into agreeing to chop those adorable ponytails off! It's the hair she went through preschool with, the hair she had when she started kindergarten! She chopped it off right before she started grade one. And now suddenly she's going into grade two!

I was holding in my hands Miriam's first major haircut—holding her baby hair that we just chopped off ten months ago—and thinking about how she's going into grade two this year.

How is that even possible?!