I debated putting writing about this because it's sort of gross. Gross as in "WARNING: the following blog post contains discussion and images of human excrement; viewer discretion is advised" gross.

Zoë frequently plays at my feet while I shower. She's such a momma's girl that if I didn't shower with her I probably would never shower. Well, the other day I was washing my hair and she was holding onto my legs, walking in circles around me, when all of a sudden she stopped and I felt a plop, plop, plop on my foot.

She had the whole shower at her disposal and she chose to poop on my foot!

I hollered for Benjamin and asked him to bring me my phone because I thought it was hilarious and I wanted to show Andrew (who wasn't at home). I couldn't stop laughing.

I've been a mom for nine years now and not once has a child ever pooped on my foot before!

In case you're wondering how I dealt with this, I ever so carefully hopped over to the toilet and shook the poop off my foot, then balanced on one foot while I got the chunks out of the shower.

Here's hoping my first time being pooped on like this is also my last time! 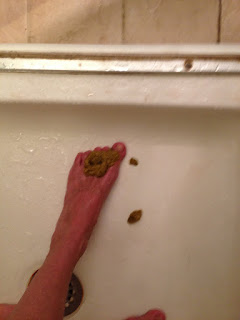