After school we did a few chores before getting ready to head to the pool. Unfortunately, the pool was in the process of being closed down just as we arrived (a fecal matter incident) so we left feeling rather dry and dejected, so I surprised the kids with a visit to our local splash pad instead of heading home. They had a great time! 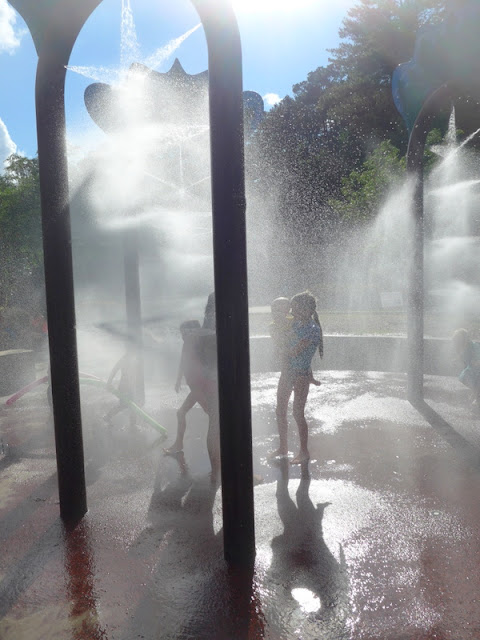 Zoë wasn't too sure what to think about it, truthfully... 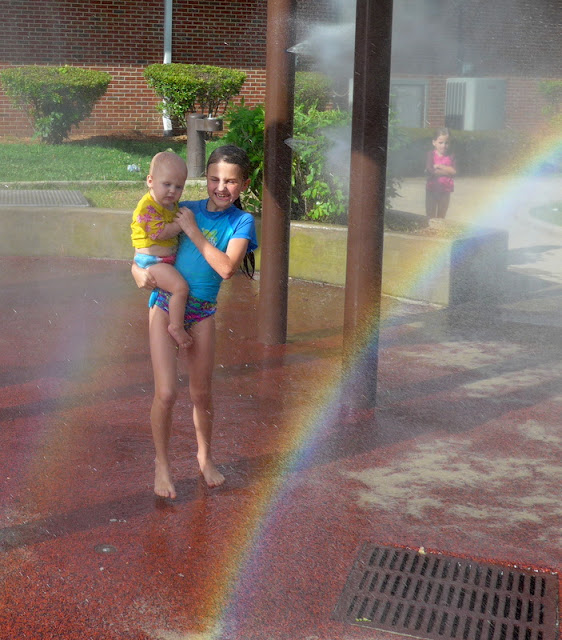 Here she is expressing her newly formulated opinion: "Get me out of here!" 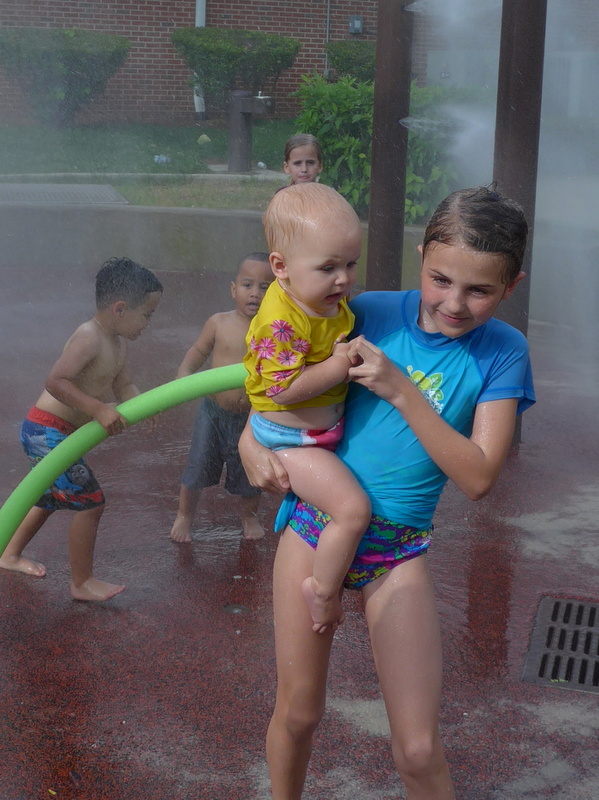 Here are all four kids together: 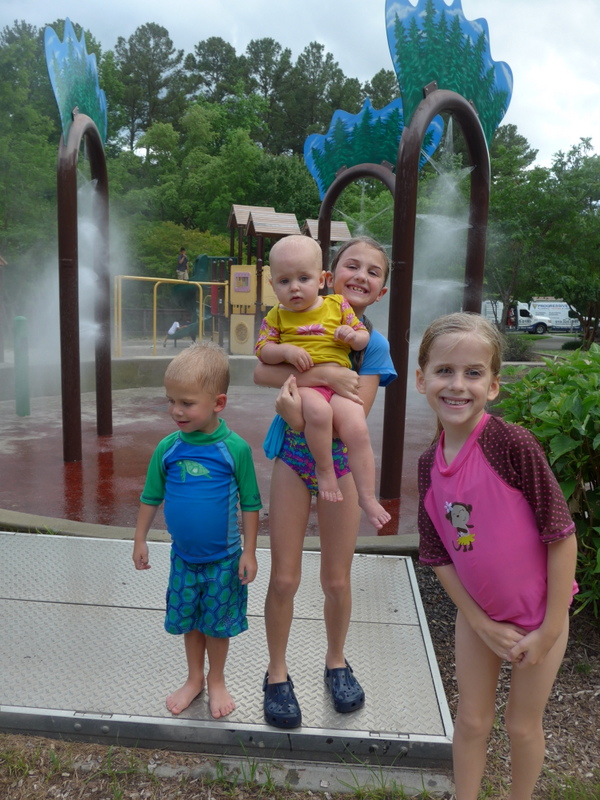 A big cloud covered up the sun soon after we arrived and we were almost worried it was going to start storming, but it didn't. Still, three-quarters of my kids decided it was too cold to play on the splash pad while it was cloudy so Rachel frolicked in the water while the others played on the playground.

Here's Zoë answering the question, "What are you playing with?" 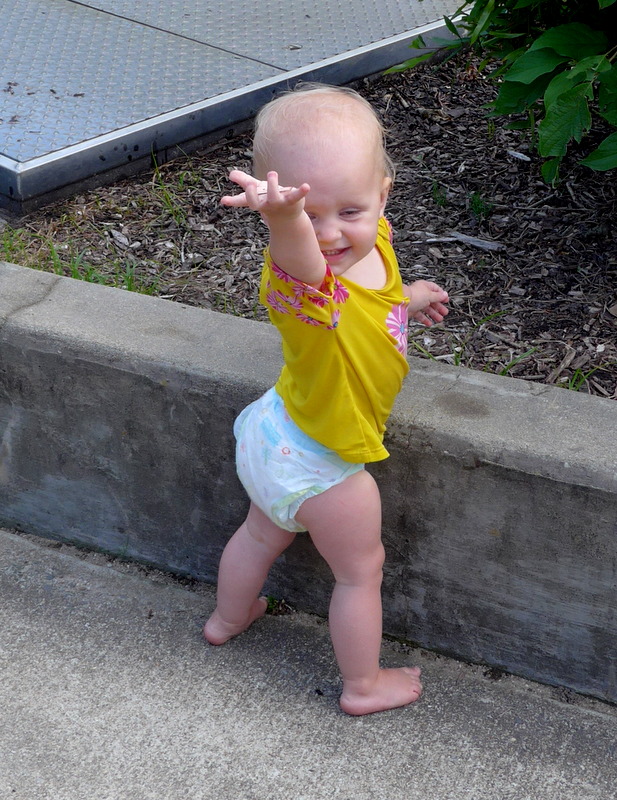 She can climb onto that wall by herself, by the way. This girl is just full of trouble lately. She's figured out how to push chairs around the house (so she can climb on them to get what she wants), she can get onto the top bunk, she can let herself out of the storm door, and tonight she figured out how to wriggle out of the straps of her highchair and stood right up while we were clearing the table after dinner (though, fingers crossed, I've taken care of that issue). 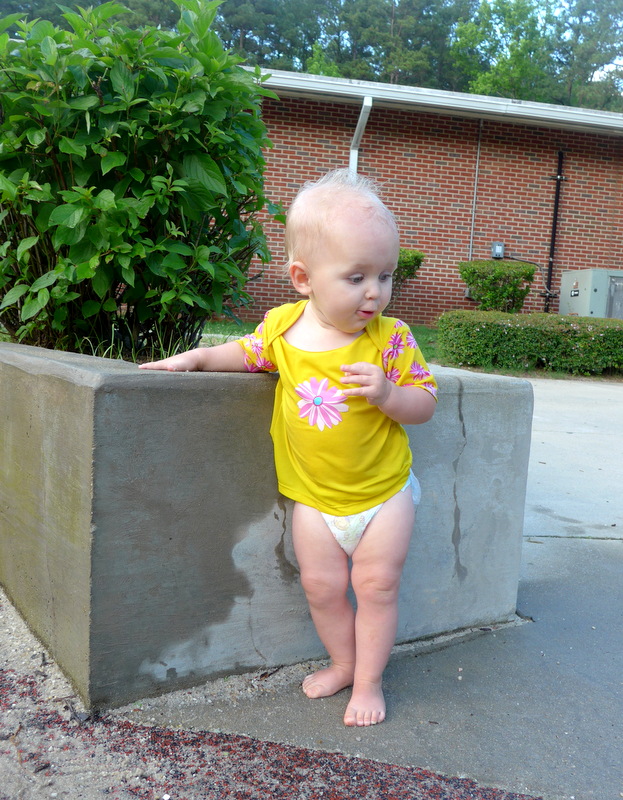 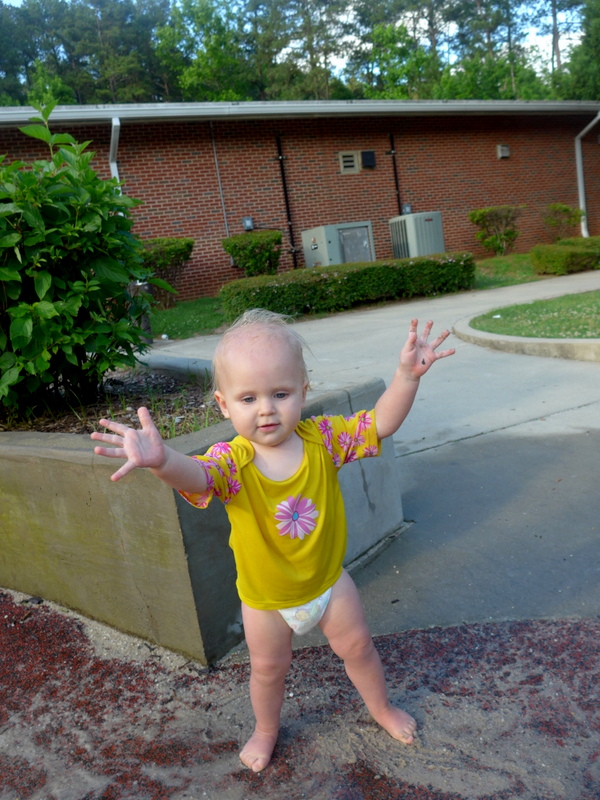 We had to get a few pictures of our first day at the splash pad, though! 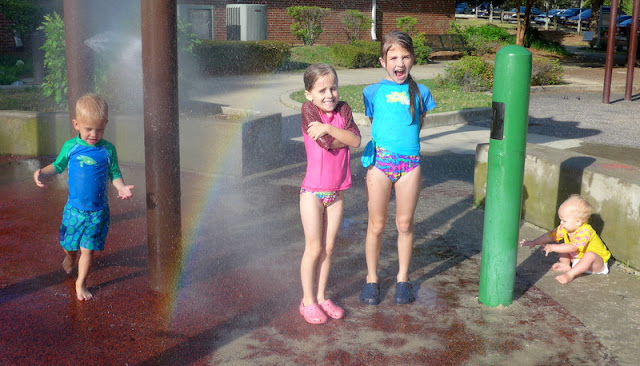 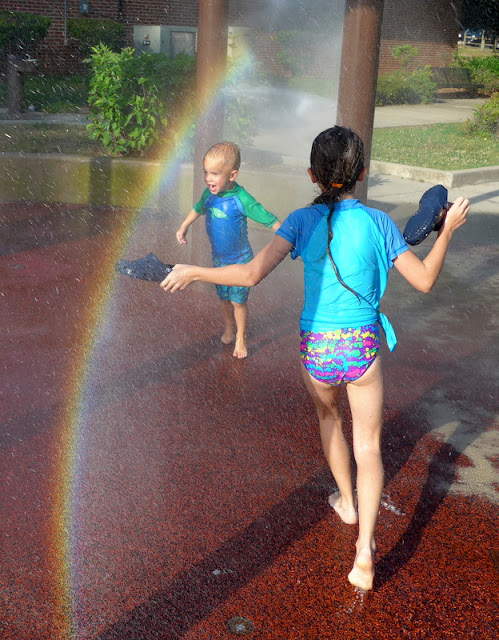 He was super excited when I showed him the rainbows he was running through (rainbow is his favourite colour, you know). 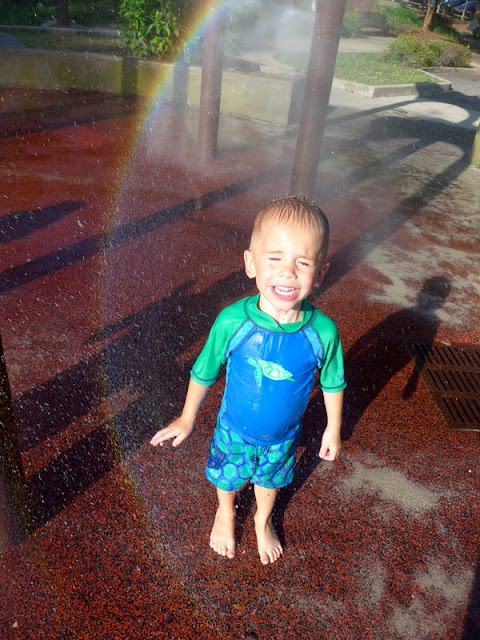 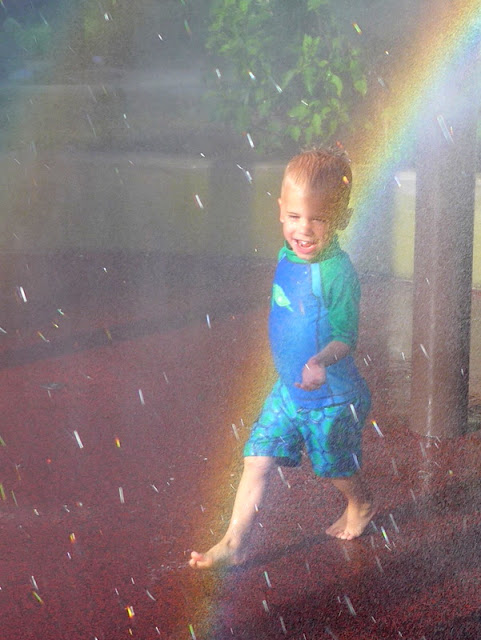 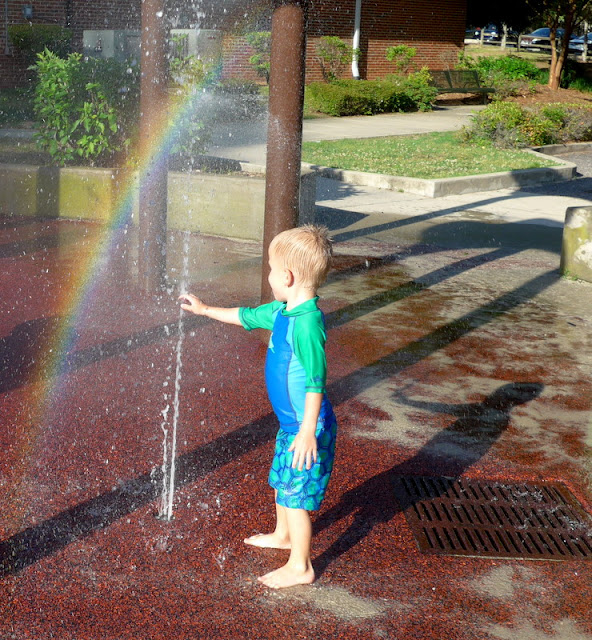 The kids didn't want to leave, but, alas, we had to get home for dinner and bedtime. 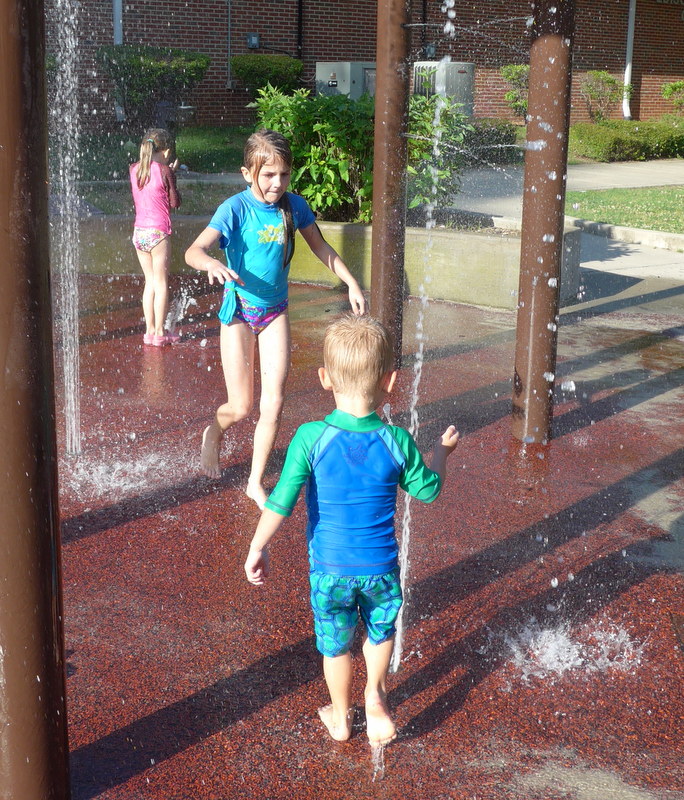 School's almost out for summer break, though, and then we won't feel so pressed for time in the evenings. 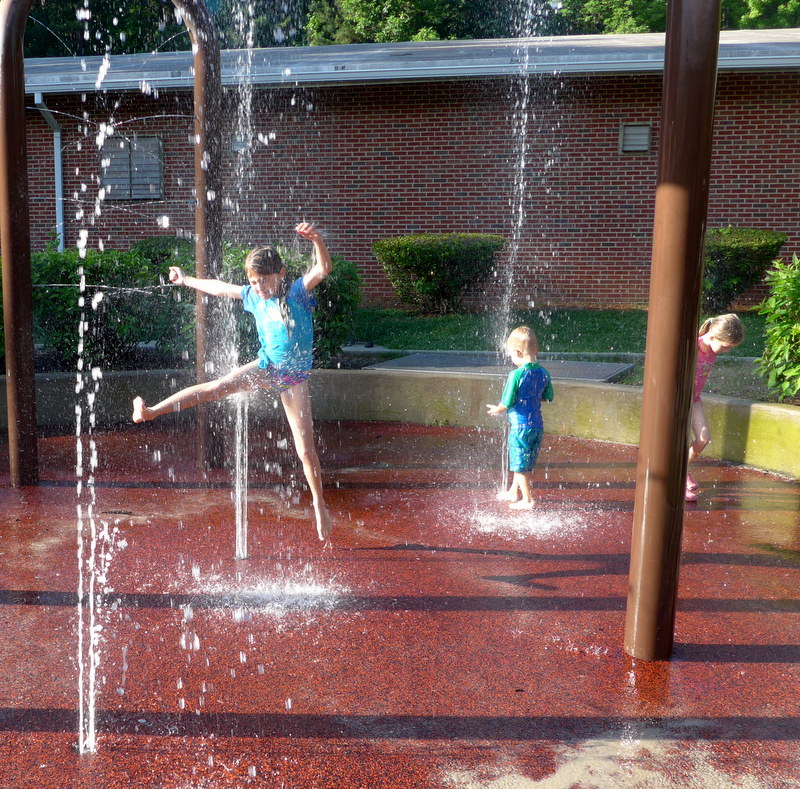 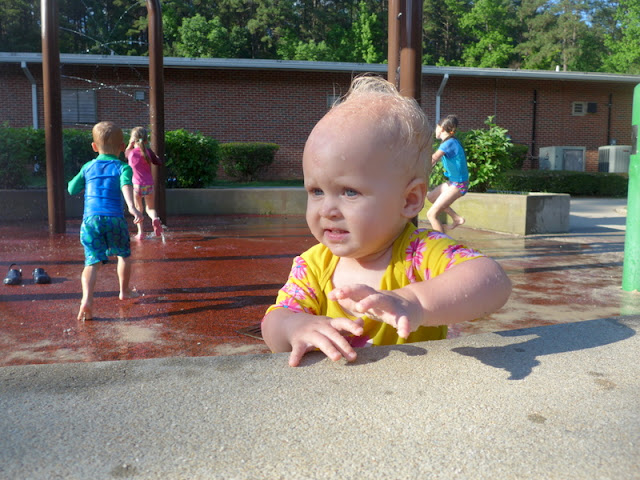