Last night was "Grandparent Night" at the school. It's basically just a ploy to get grandparents to spoil their children at the book fair, but they also had some treats and activities to do...which is more than their old school ever did (with Easley's "grandfriend" breakfasts we never had planned activities beyond eating a class-donated breakfast and either sitting around the classrooms or traipsing down to the book fair). The PTA sponsored this event so as room parent I didn't have to do anything.

Oh, did I mention that I'm room parent for Benjamin's class? I tried desperately (read: I simply didn't volunteer for the position) to get out of it this year because I've been room parent for either Rachel or Miriam (or both) since Rachel started kindergarten and, frankly, it can be quite a lot to handle when you have to (a) plan parties and coordinate grandfriend breakfasts and solicit donations and volunteers and help out in the classroom and with all the fundraising and (b) have a new baby.

I know because I've done it. And I'm feeling a little swamped right now already and since we have a new baby on the way I thought it was an excellent excuse to take a year off.

But Benjamin's teacher is my friend and no one signed up to be room parent. So I said I would do it.

And it's really not half as bad as it was at either Easley or Eno Valley. All I have to do is coordinate parent volunteers for two field trips, one field day, and one "Kinder 500" day (whatever that is). No parties. No begging for donations.

I guess I have to do stuff for teacher appreciation week as well, but I can totally handle that because kindergarten teachers get two room parents (because of the whole half-day/AM/PM thing) so I only have to do half the appreciating (not that I don't fully appreciate his teacher...just that I sometimes don't particularly enjoy decorating doors).

Anyway, I've always gone to the grandfriend breakfasts (I think Andrew went to one once when I was double booked...or when they moved the school schedule to start at 7:45 and I was like, "There is literally no way I can get myself and a baby and a preschooler out the door in time to make it") and have helped set out the breakfast and greet the parents and once I think I even took the girls down to the book fair. But they've never had their grandparents take them...

Now we live close enough to grandparents that our grandparents can go! So my parents had the honour of escorting my children to Grandparent Night. 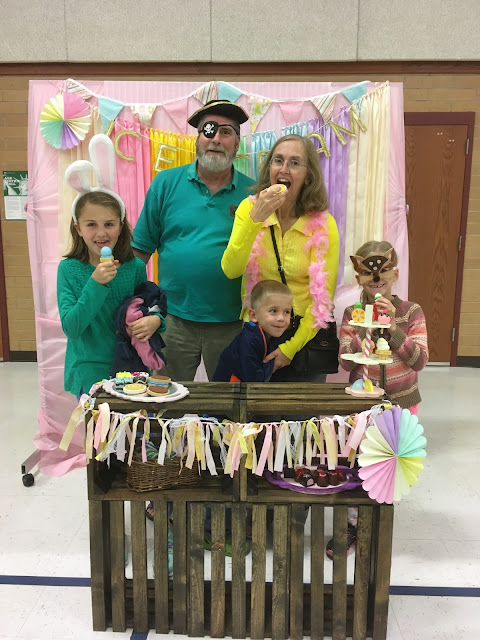 Those two are so silly together that it's just fun to watch them chase each other around.

Anyway, Benjamin decided he didn't want to go at the very last minute. He wanted to stay and play LEGO.

"But," I explained. "Your sisters won't be here to play with you because they are going to the school."

"I will just play downstairs with you!" he said.

"But, Benjamin!" I said. "It's just the kind of "School Night" you've been waiting for! There's literally going to be a party at the school tonight and if you don't go you're going to miss it!"

Naturally he ended up having a great time, as did everyone else. They made picture frames, ate treats, and had fun walking to and from the school with Naanii and Bumpa: 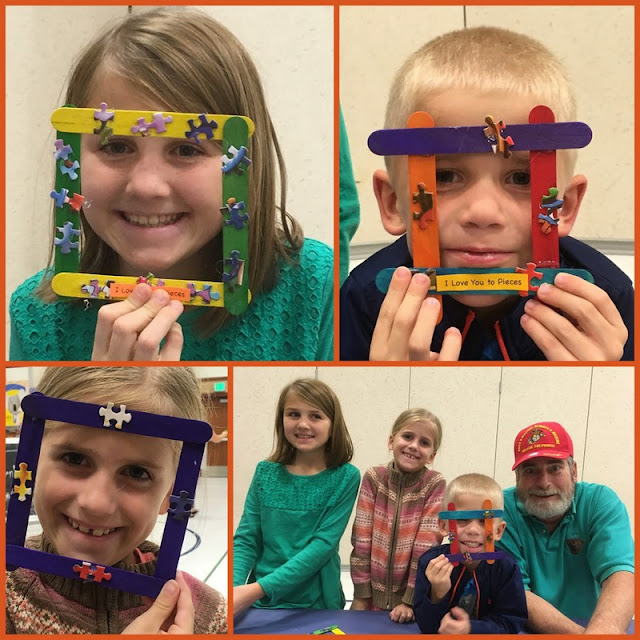 Thanks for taking them, Mom and Dad! Living close to family sure has its perks!
Posted by Nancy at 11:40 PM