For FHE (I guess...because it's Monday and that's what we did (and we did it as a family so it totally counts (our friends the Rogersons would call it "post-activity justification," or something like that))) we went to the school carnival.

We'd had a bad case of the Mondays at our house. The kids weren't exactly misbehaving...they just weren't exactly behaving either. Zoë was in a particularly sour mood. And, let's just say that before we left the house I gave my girls a lengthy lecture about pitching in (because I had asked them to help me clear the table and do the dishes so that I could take care of the grumpy baby but they insisted that they'd rather take care of the grumpy baby so they took her outside to play but then the grumpy baby abandoned them and they just kept playing what they were playing so I ended up with both a grumpy baby and all the clean up...and then I asked the grumpy baby to go potty so we could leave and she threw a huge fit about not wanting to go potty so I said, "Fine, I will go potty while you're rolling around on the ground screaming and when I get back it will be your turn," and she ended up peeing her pants like ten seconds later and coming to find me, crying, "Momma, I peepee floor!" and I was like, "AHHHHHH!!! WHY?!?!?" because, like, I had just tried to get her to go! So I had to then change her and clean the floor (it was on the kitchen floor, thank goodness) and my kids were not responding to my voice (for whatever reason it's at a frequency they can just tune out) and I was feeling a little crazy).

So none of the females in our house were in a great mood when we left.

Benjamin was fine. He missed the lecture because he'd been banished to the backyard, not because he was being bad...simply because he was far too excited about the carnival and I couldn't stand it anymore. But he actually listened and stayed in the backyard until it was time to go.

And before that he scarfed down his dinner, cleared his plate without being asked and then said, "I'm going to go get ready for the carnival!"

I really didn't want him changing his clothes and generating more laundry. I have enough trouble keeping up with it as it is (and Andrew may or may not have just run out to Wal-Mart to pick up a couple more dress shirts because I only did laundry on Tuesday last week (I usually do it twice a week, at least) and he may or may not have run completely out of dress shirts). But, thank goodness, a change in wardrobe was not what Benjamin meant.

"I mean," Benjamin explained, "That I need to clean up my cars. I left them all over my floor and I won't be ready to go to the carnival until my room is clean."

"Oh!" I said, legitimately shocked. "That you may most definitely do."

And then he actually did!

And then he came back downstairs and started bouncing off the walls, which was about when he got banished to the backyard.

When Andrew joined us at the fair and I told him about our frustrating pre-departure he said to Benjamin, "Wow, Ben! How does it feel to not get in trouble when all your sisters did?"

We went ahead and bought the $10 armbands for the kids (except that Zoë's was free because she's in the 3-and-under crowd) because I figured that Benjamin would just race from inflatable to inflatable the whole evening long, and when each turn on an inflatable is 6 tickets (equivalent to $1.50) things start adding up pretty quick. The armband lets the kids do an infinite number of games/inflatables all evening long, so it was well worth it.

Easley didn't have that deal so we were always rationing out tickets at the school carnival, which meant a lot of disappointment on Benjamin's part.

When we got to the carnival I told the girls to stay together and bid them farewell and then followed Benjamin around while Zoë grumped in the stroller (Andrew wasn't there yet and I can't be everywhere at once).

The inflatables were kind of set up in graduating sizes, so we encountered a small one first. Benjamin waited his turn, climbed inside, bounced around, and then went down the slide. Zoë waited with us, climbed inside, started crying, turned around, climbed back out, sat in the stroller and said, "Hmph. No!"

We went to the next inflatable and pretty much the same thing happened, and then again at the next.

Finally we made it to the tallest slide there.

"Ummm, I'm not helping her," Benjamin told me.

And the two of them set off to conquer the tall slide. Zoë didn't end up needing much help at all but Benjamin took his duty very seriously (in spite of not wanting to look after her at all).

Here they are climbing up the ladder: 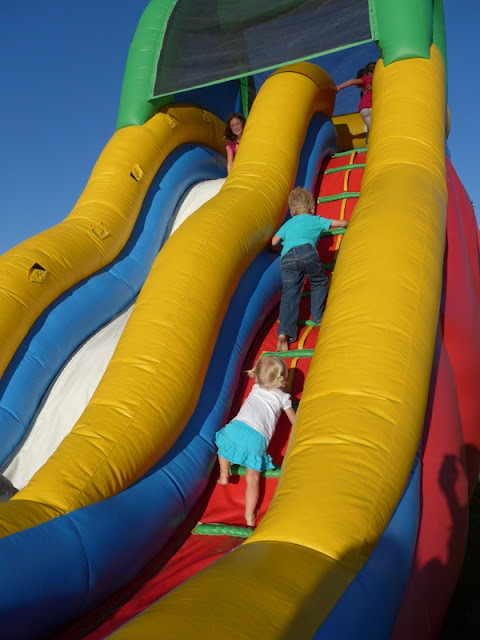 Here's Benjamin at the bottom, checking to see where Zoë is: 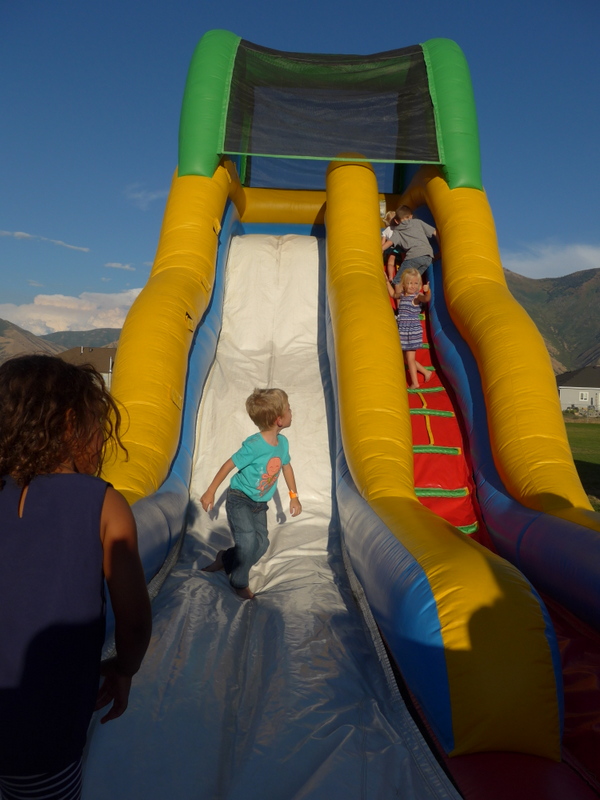 There she is at the top: 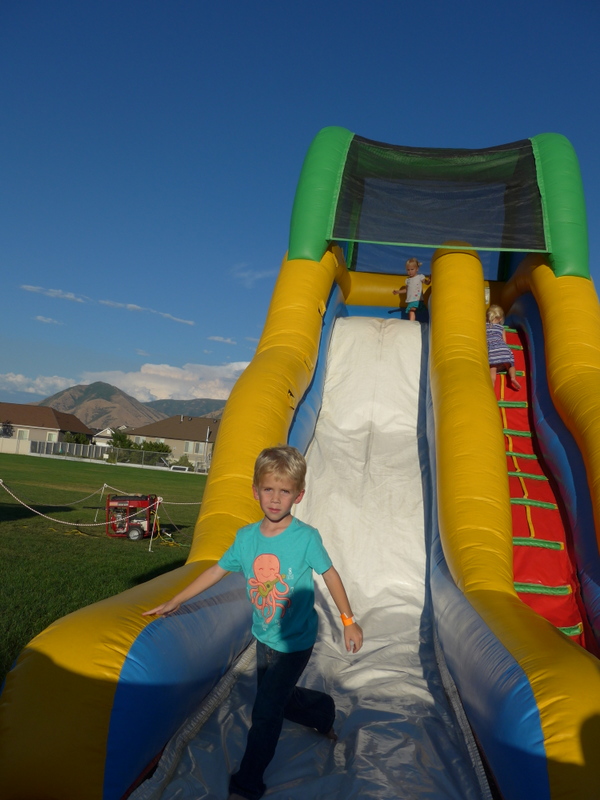 And here's Benjamin watching her go down: 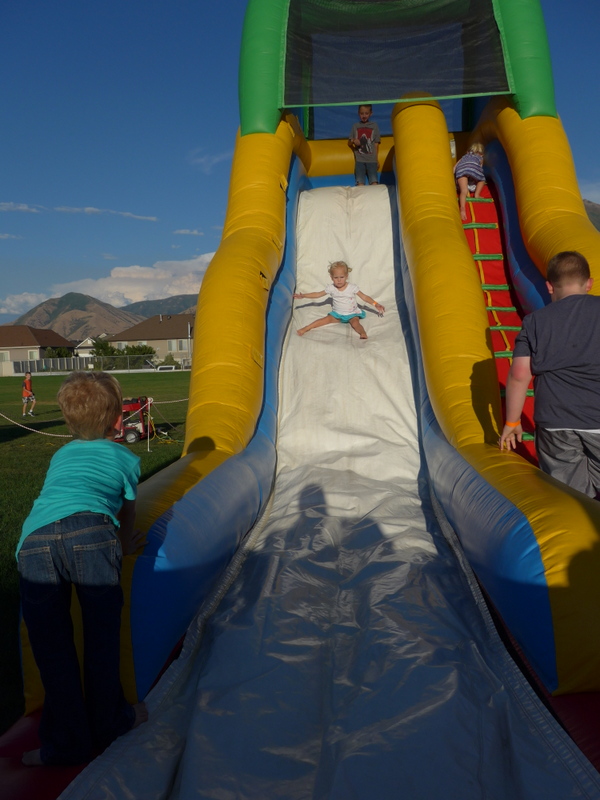 And prompting her to get off on the right side of the inflatable: 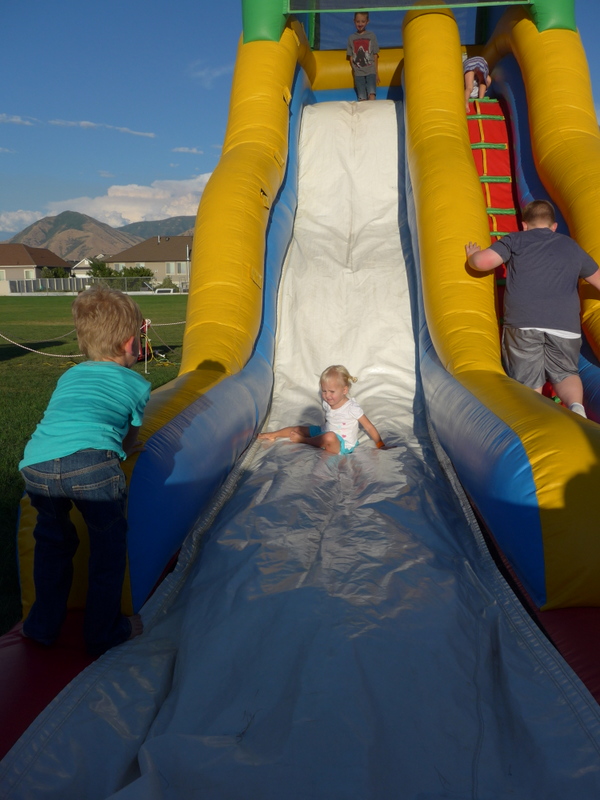 And with that she was hooked. The two of them looped around this thing dozens of time! She even consented to trying a few of the other inflatables, but her favourite thing, perhaps, was the train ride.

We only went on it once because the line was always rather long (in fact, I stood in line for the kids while they ran off to play a few games—the line was just that long) but the kids all loved it.

Here's Rachel (while in line for the train) rolling her eyes at me when I prompted the kids to "smile like we're a happy family whose mother wouldn't ever lecture you for not helping clean up after dinner because you're perfect children who would never, ever not help clean up after dinner": 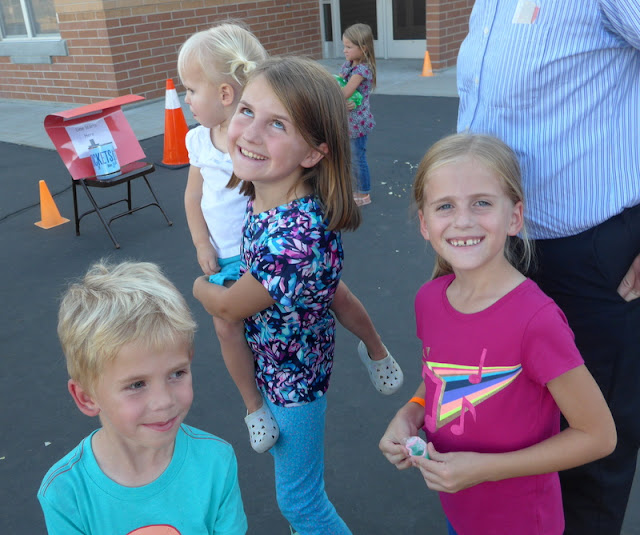 And here's another attempt at a group picture (there were no decent ones of everyone):

Here are the girls on the train—Miriam is in a bin that was rigged so it spun around the whole time (the car on the back had purposely off-set axles so it was all wibbly-wobbly like a bucking bronco) while Rachel and Zoë squeezed into one car together: 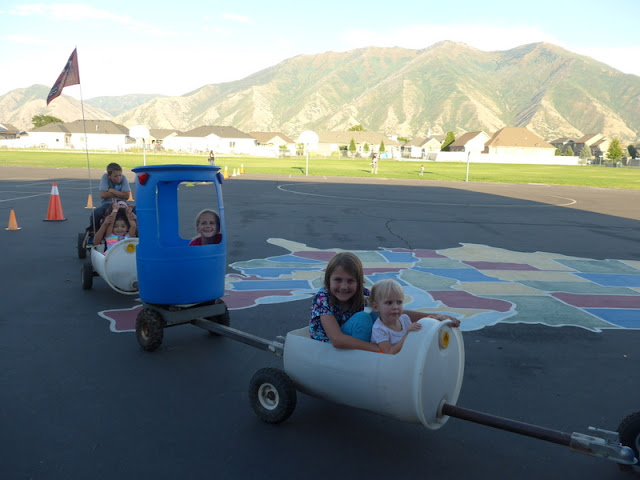 Here's Benjamin in his bin (that did not spin): 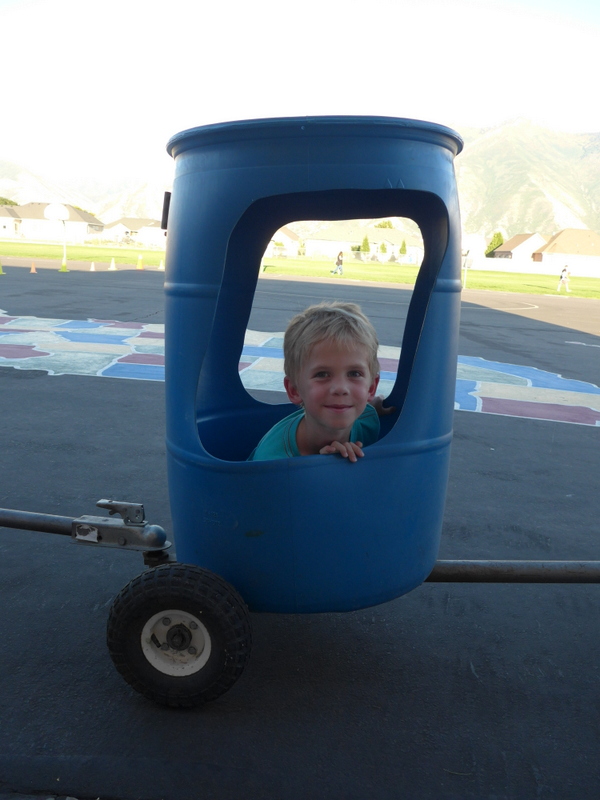 And here's Zoë giving me a last-minute wave goodbye as the "train" pulled out of the "station": 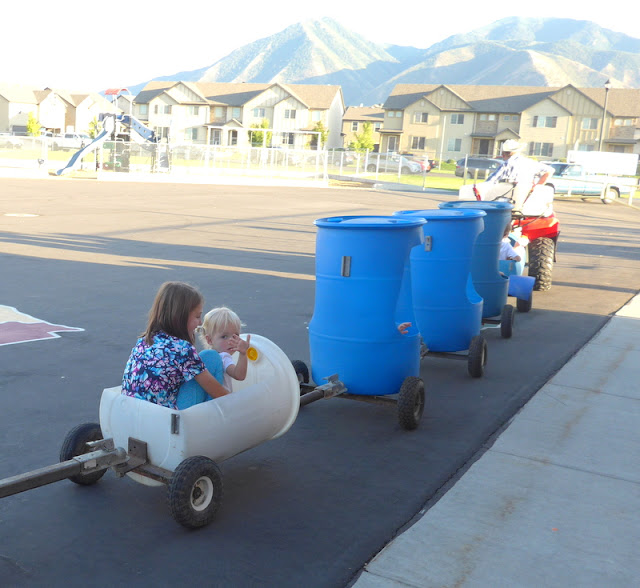 They made a couple of loops on the blacktop before returning to the station: 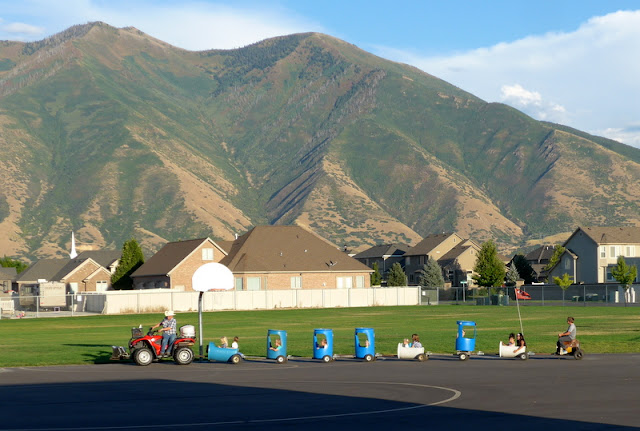 Zoë did not want to get out when the ride was over and she let her feelings be known, loudly. 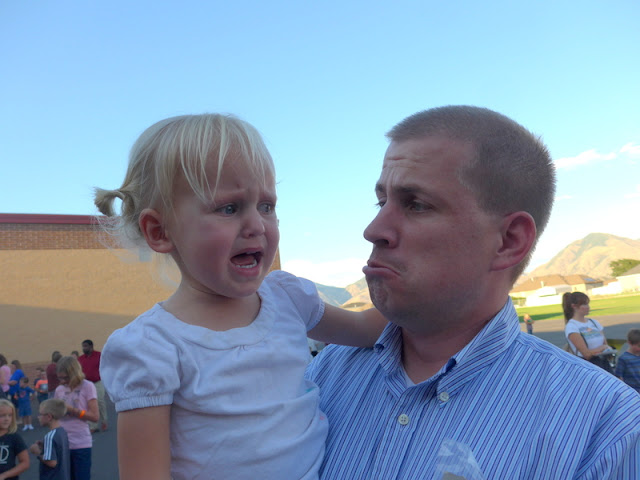 Luckily, I'd packed some treats in my diaper bag (since I knew there were treats available for purchase there...which we weren't intending to purchase (yes, I realize it's a fundraiser but there are limits to how much funding I think our family should personally raise)) and we were able to bribe her into silence.

She got over her disappointment when we made our way back to the inflatables again. She and Benjamin went down this slide another billion times before we started making our way toward home (stopping at every inflatable along the way, naturally). 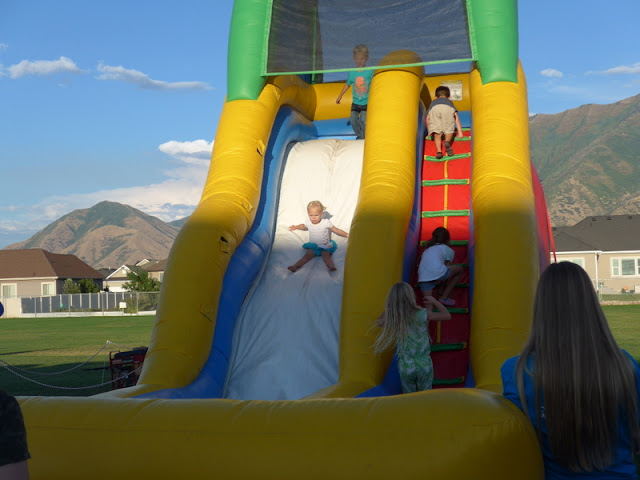 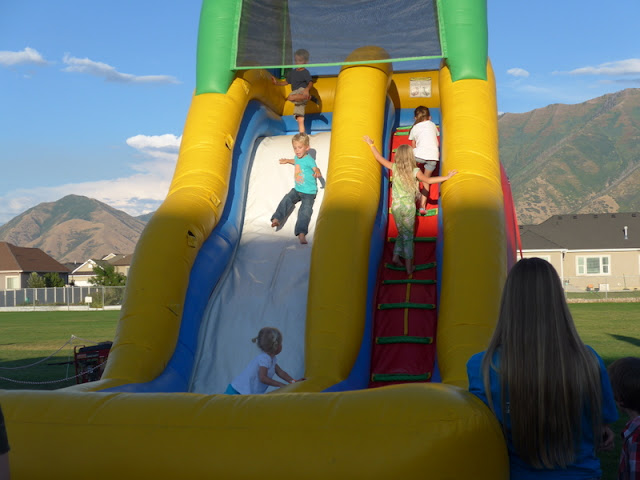 Here's Zoë going down the first inflatable we encountered (the one she refused to go on (and seemed scared to go on)): 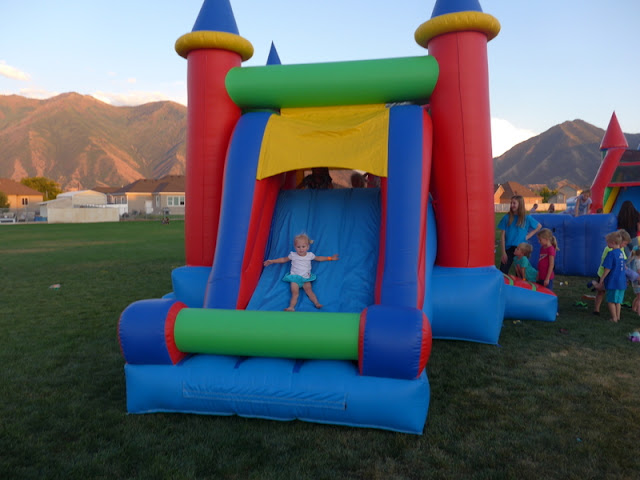 She and Benjamin spent quite some time looping around this inflatable while we waited for their sisters to find us. When it became clear that they were not going to find us, I sent Andrew off to locate them while I stayed and watched Zoë and Benjamin wear themselves out. But then I noticed that the girls had indeed come to find us; they simply hadn't told us that they'd found us and instead had gotten in line for the very inflatable we were waiting at.

Andrew was a little too far away for me to call out to him, so I tried texting him to tell him to come back but evidently he didn't check his phone because he spent several minutes wandering around looking for the girls who were with me the whole time. I let them all keep going through the inflatable while we waited for him to come back to us.

Here's Miriam showing off her prizes: 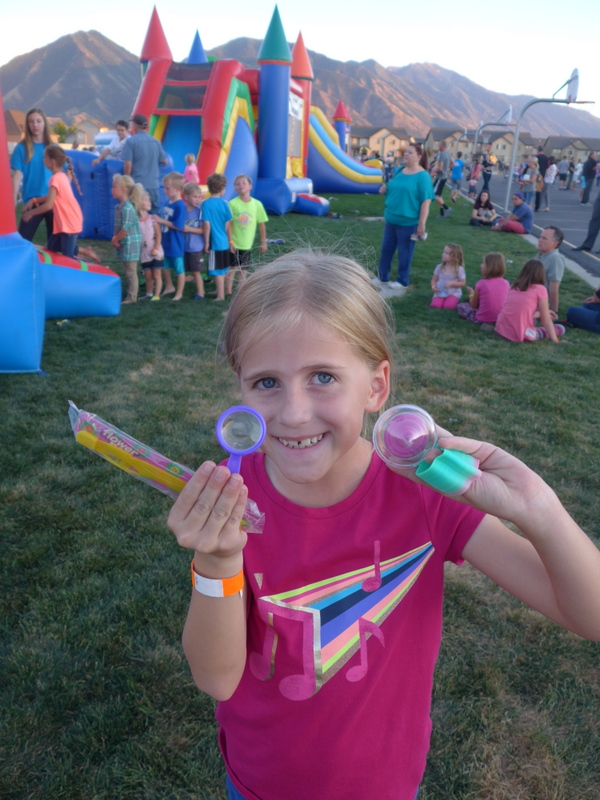 And here are a few parting shots of the children tumbling down the slide: 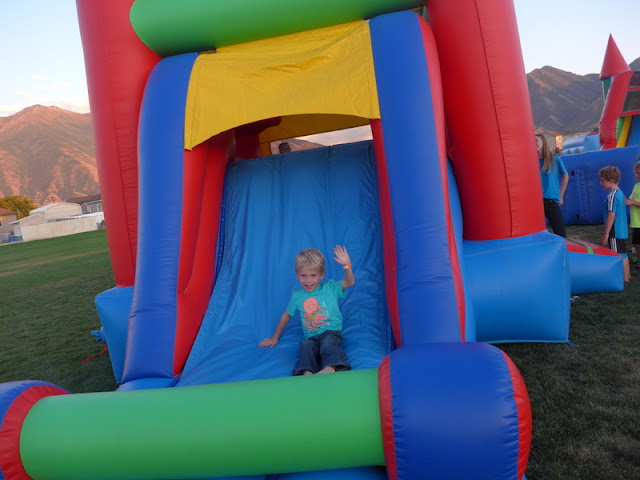 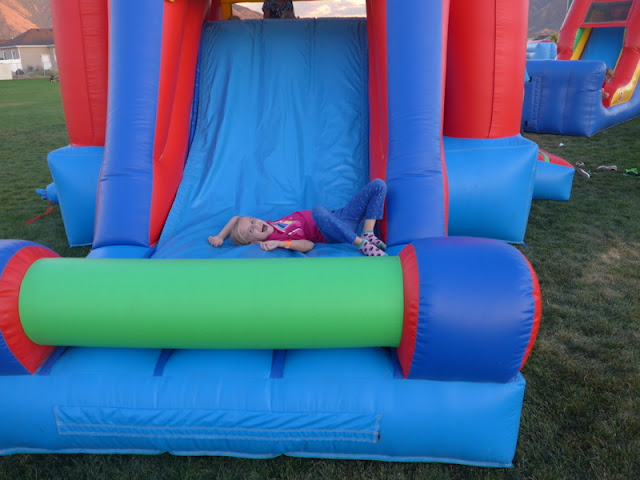 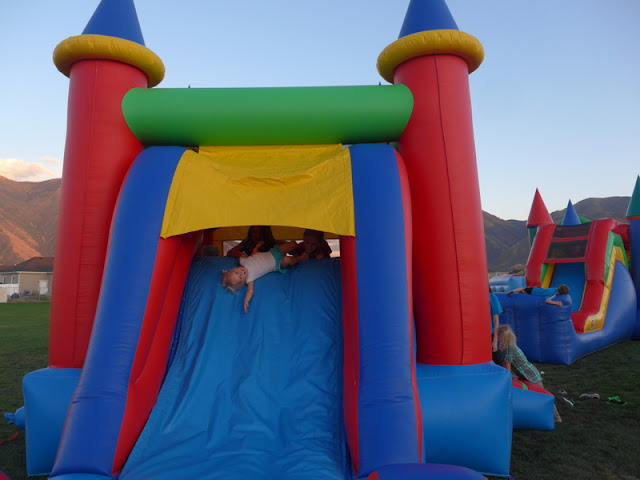 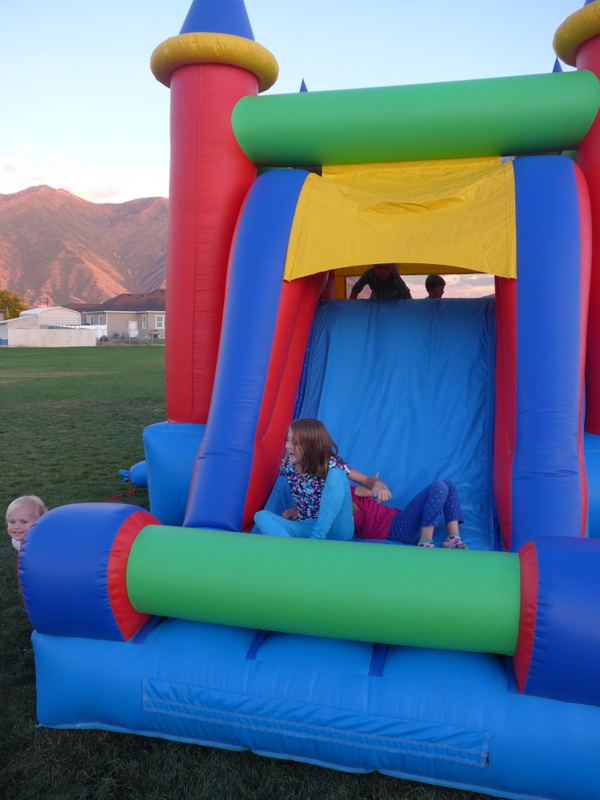 It was nice to end the day on a positive note. Perhaps Mondays aren't so bad after all.
Posted by Nancy at 1:35 AM