This morning the family went to church in Hanksville and then drove out to Lake Powell to see the lake from that side (which has never been done before). I think that's the side with the Bullfrog Marina, though I don't think I've ever actually been to Lake Powell before, so don't take my word for it.

When Karen was telling me about stopping by the lake I asked if she wanted me to send along Benjamin's puddle jumper. He can swim but, you know, peace of mind and all that.

"No, I don't think we'll be getting in," she said. "We're planning on going on Sunday."

But then when I was packing, Reid said, "Make sure to pack things the kids can get wet in because we're stopping by Lake Powell."

"Oh, Karen said you wouldn't be getting in," I replied.

He scoffed and asked, "Do you really think your children can look at the lake and not get in it?"

"Yeah, no," I agreed. "But they each packed an extra outfit so they can get wet in anything (except their church clothes, of course)."

So, that's what happened this afternoon.

Karen texted me around 6:00 to say, "By the way, we did NOT let the kids swim in Lake Powell this afternoon." And Shayla tagged me in this picture on Facebook: 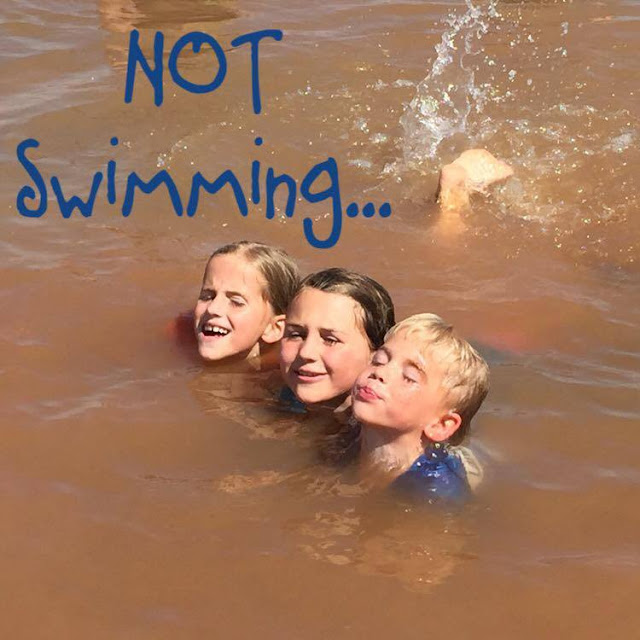 Before adding all of these...

So, clearly they all did a great job of not going in the water.

For our part, we had a pretty lazy day. I got up with Zoë in the morning and let Andrew sleep in. She fussed the whole time, constantly screaming that she was "HAPPY!" (she wasn't). We took a shower and played in the bathtub before finally waking up Daddy. And then I took a nap while she and Daddy watched a show and played LEGO together.

After she and I had lunch (it's fast Sunday so Andrew didn't join us), we headed to church. I thought for sure we'd be able to handle the three-hour block today but Zoë was a train wreck so Andrew took her into the hallway where she kept nearly falling asleep. So he suggested that I take her home for a nap—because it was either that or he sit in the hallway and hold her while she naps, and since the two of us are still a little sick (this illness does make one feel rather sleepy), I took him up on it.

He escorted us home and then went back to church by himself. I fought Zoë for about a half hour (she kept telling me how "HAPPY!" she was, despite her tantrums and tears, so clearly no nap was necessary even though she could hardly keep her eyes open) and eventually let her kick my back until she fell asleep, so we ended up with a good 1.5 hour nap before Andrew came home.

And then Zoë cried until dinner time (she's so "HAPPY!") and then she fussed during our walk because we hadn't brought along water for her and then she fussed some stumbled upon a dress-up dress and settled into a little game. Although she doesn't consider Andrew or I the best of playmates (where, oh, where have her siblings gone?), she was happy to have our undivided attention as an audience while she put on a little show for us.

First she wanted to dance. Her sisters have been giving her ballet lessons after school the past couple of weeks. Rachel's not really into ballet anymore but she loves playing the role of mentor, so Miriam and Zoë (and often Benjamin) will dress up and Rachel will help them create dance routines and will play music for them. It's pretty cute. They'd told me that Zoë had learned how to do an arabesque but I kind of brushed that off because when they tried to get her to do it she'd continued to twirl around the room crazily. However, tonight, I was calling out things for her to do and she was happily executing them.

"Now do an arabesque," I joked and she obediently flew into an arabesque-esque posture (though she can't quite balance on one leg yet). 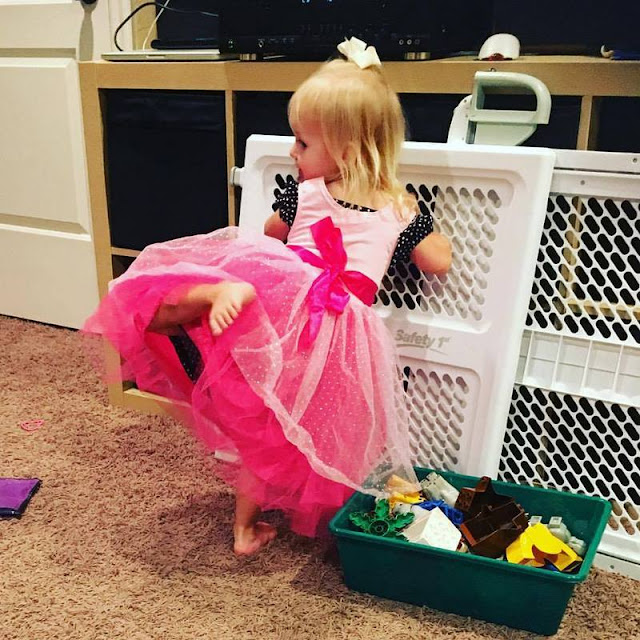 Andrew and I laughed about that, which threw Zoë into full-on performance mode. Here she is standing in the spotlight (or on the spotlight, as it were), holding her "hymn book," conducting some music, singing "Song! Song!", and clicking her tongue.

I'm not sure why she decided she'd do all those things but it made her happy (like, actually happy) so we allowed it. Also, it was adorable, so...why would we disallow it?

She still had a few temper tantrums before we got her into bed (and then didn't fall asleep gracefully) but hopefully she'll sleep well tonight and will feel better enough in the morning that she won't be so terribly grumpy (and by that I mean, "HAPPY!" obviously).
Posted by Nancy at 2:20 AM