Hey, Everybody! It's Family Night!

Yesterday morning I asked Benjamin to help unload the dishwasher and though he moaned and groaned about it he agreed that he'd unload the top rack. But then we got to chatting as we worked together (I put away the glass and other up-high stuff) and he ended up unloading the bottom rack as well, leaving only the silverware for his sisters.

I told him what a nice thing that was for him to do and then told him about going the "second mile." And then I started making mental plans for a family night lesson on that topic, just to really drive the message home.

So...she taught the family night lesson tonight because who can argue with that?

Miriam's lesson was so sweet. She first had us fill in the blanks on a message that said,

We had to draw a slip of paper and glue it onto the right spot and for some reason she decided we'd take turns oldest to youngest, which was a challenging exercise in patience for the youngest among us. 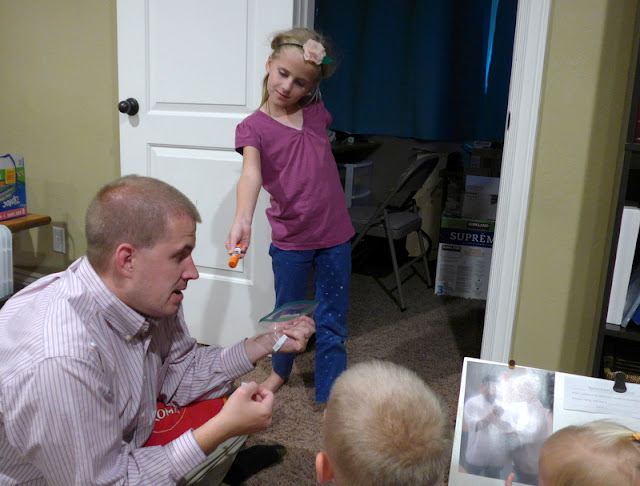 Here are the kids debating where things go: 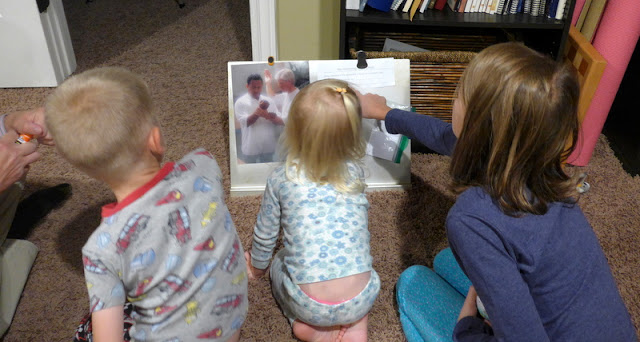 And here is Zoë feeling really anxious about getting her turn: 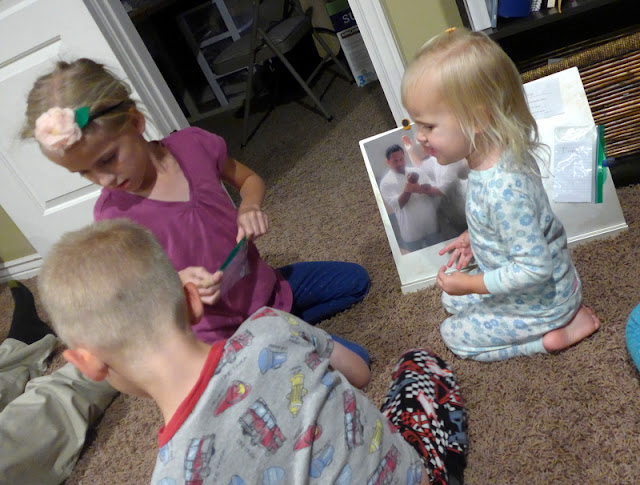 Phew! She finally got to use the glue! 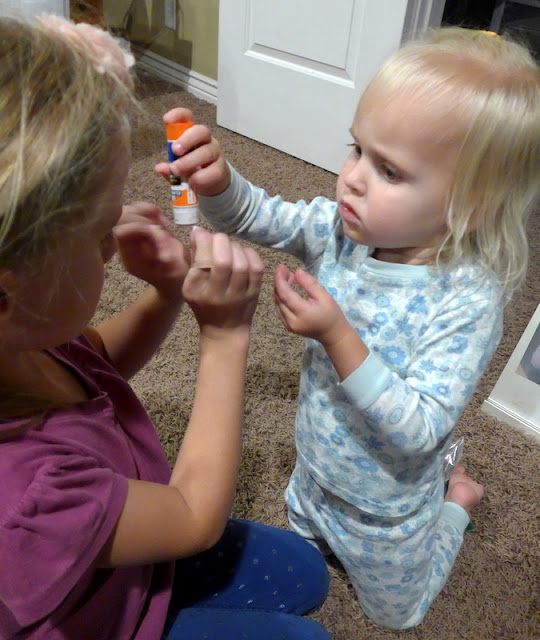 We ended up with this:


When I partake of the sacrament, I renew my covenants with Heavenly Father. I promise to always remember Jesus Christ and to obey the commandments.

Miriam explained that the sacrament is important because we make the same covenants during the sacrament that we make during baptism. "Because this could just as easily read, 'When I am baptized I covenant with Heavenly Father. I promise to always remember Jesus Christ and to obey the commandments," she told us.

Then she had us play a little memory game with key words from her lessons. Zoë collected all the cards (and was still grumpy, despite how gracious her siblings were being): 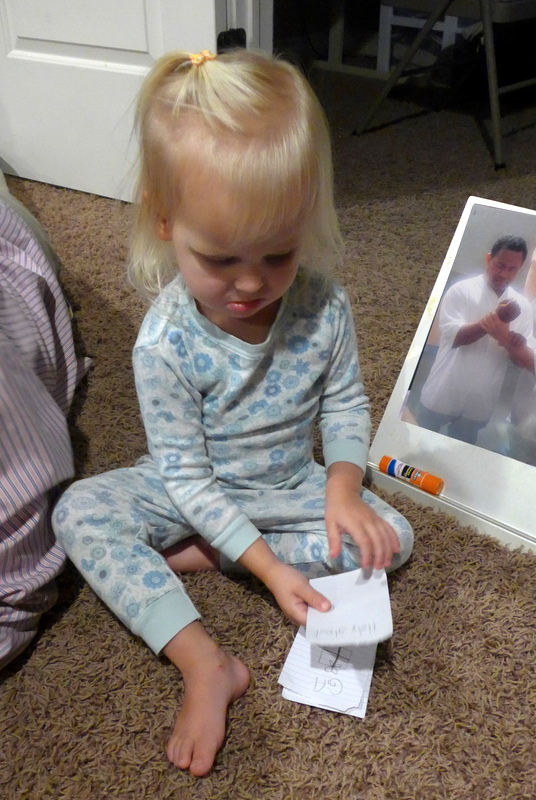 We especially enjoyed her illustration of the Holy Ghost:

After our memory game she had us play a gospel-themed version of "Duck, Duck, Goose," but with the words, "Baptism, Baptism, Holy Ghost" instead. Our circle was a little wonky because Zoë and Benjamin insisted on sitting on Andrew's back, but the game worked alright. 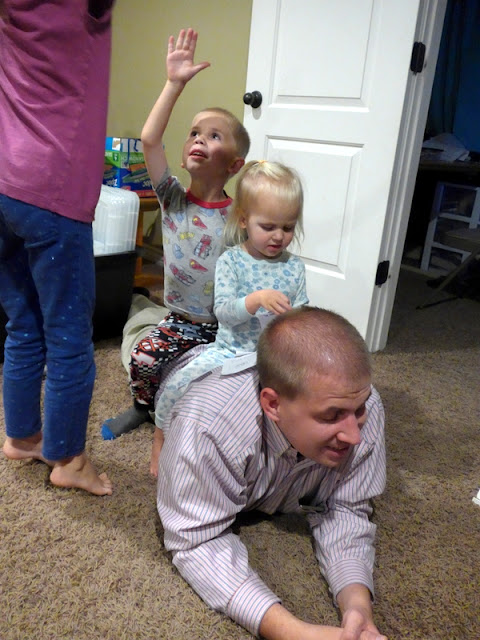 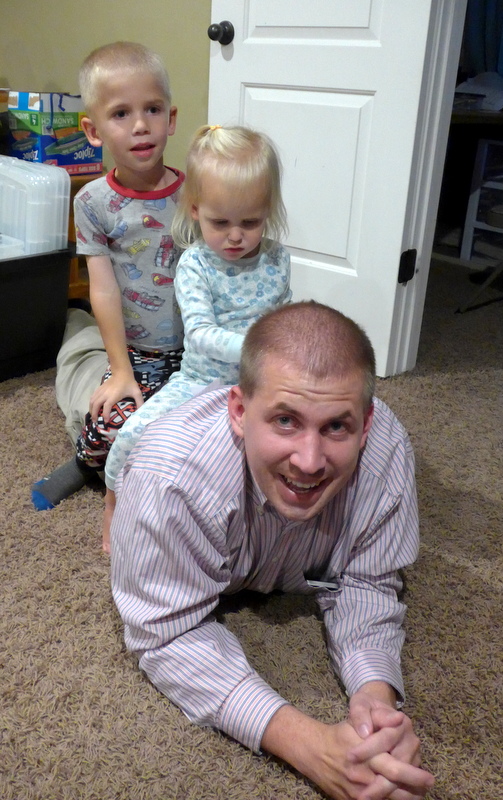 Miriam skipped around tapping everyone on the head, saying, "Baptism, baptism, baptism..." I lost it, though, when she put both her hands on Andrew's head and said, "Holy Ghost!" because do you see that picture in the background? It's a picture of a little girl receiving the Gift of the Holy Ghost through the laying on of hands, and with Miriam placing both her hands on Andrew's head it looked like she was mimicking the "the procedure revealed by the Lord for performing many priesthood ordinances," which...I just...I dunno...

Remember her pin-the-Jesus-on-the-cross lesson of 2015? How do her lessons so often end up being just a smidgen heretical? Maybe don't answer that. K, thanks.

Here's half the family gathered for scripture study before bed (I took a picture just because I had the camera handy...and because it's evidence that we teach our children straight-from-the-source doctrine): 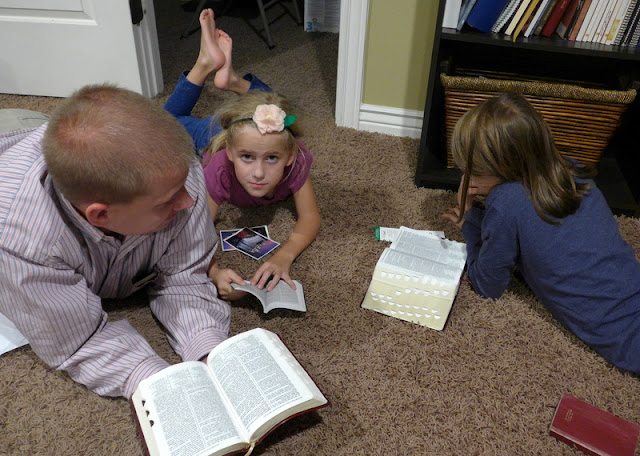 It really was a wonderful lesson and we all had a great time, so a big thanks to Miriam!

Unless someone else wants to jump in and teach...
Posted by Nancy at 1:03 AM