Today was Benjamin's very first Monday in the classroom—and it was an early release day, to boot! Last week was Labour Day and the week before he started kindergarten on a Tuesday and the week before that he didn't have school (while the girls did) so he missed out on Monday after Monday, which is probably fine because Mondays are hard.

My kids, at any rate, were particularly sluggish this morning. But we got them all out the door in time to make it to school (phew!) and then Zoë and I spent just a couple of hours together before heading to pick Benjamin up from kindergarten. His day is only 2 hours and 40 minutes long, anyway, but on early release days he's barely at school for 2 hours (it's a little crazy).

He usually comes out of class starving and always wants to go straight home for lunch. For some reason they don't do snack time at this school—for anyone—which is kind of a weird concept for me to wrap my head around. The girls pack a lunch, and get 2-3 recesses every day (which is awesome because in North Carolina they only ever got one (highly regimented) recess) but there's no dedicated snack time. I grew up with everyone taking their snack out to the playground for morning recess—you'd wolf it down and then go play. Same thing with lunch—wolf it down, run out to play. But here they don't do snacks. I'm not sure why.

Are they afraid the playground would become too littered? It's been my casual observation that Americans litter more often than Canadians do (like, we were just at the school carnival and there were candy wrappers all over the school yard—I just don't think that would have been stood for by either parents or the school administration at any school I attended (classes rotated playground trash duty anyway so we knew not to litter and instead stuffed our pockets full of wrappers and peels and baggies (like responsible children (so that our mothers could find them while doing laundry)))) so that's a valid concern.

And a child in Benjamin's class has a peanut allergy, so I guess not having snack time at all eliminates (or greatly diminishes) the chance of contamination. But going from 8 am (when my kids eat breakfast) to nearly noon (when Benjamin gets out of school) seems like a long time for little kids to be going without refuelling.

I distinctly remember having snack time in kindergarten (and I was in half-day kindergarten) because my friend would bring an orange and chew on a segment until she'd sucked all the juice out and then she'd spit out all the skin and stuff and I thought it was so gross (but I picked my nose, so who am I to judge?).

Anyway, all this is to say that Zoë and I decided we'd pack up a snack to bring with us when we picked Benjamin up to see if we couldn't convince him to spend some time at the playground with us. He was more than happy to oblige Zoë's desire to go to the "play-ound" when snack time was involved (let me tell you, walking past the playground to pick Benjamin up every day and not stopping has been torture for this poor two-year-old (I suppose not every declined playground trip was Benjamin's fault; I also wasn't on board because I'd been so sick (but I'm better now so I feel up for the playground)).

Here they are enjoying some peach slices: 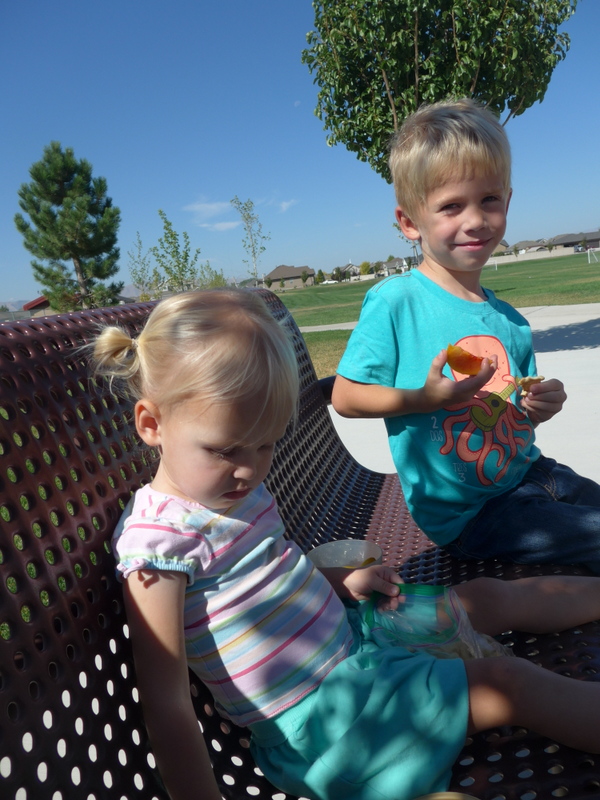 They moved onto the sidewalk so they could both sit in the shade: 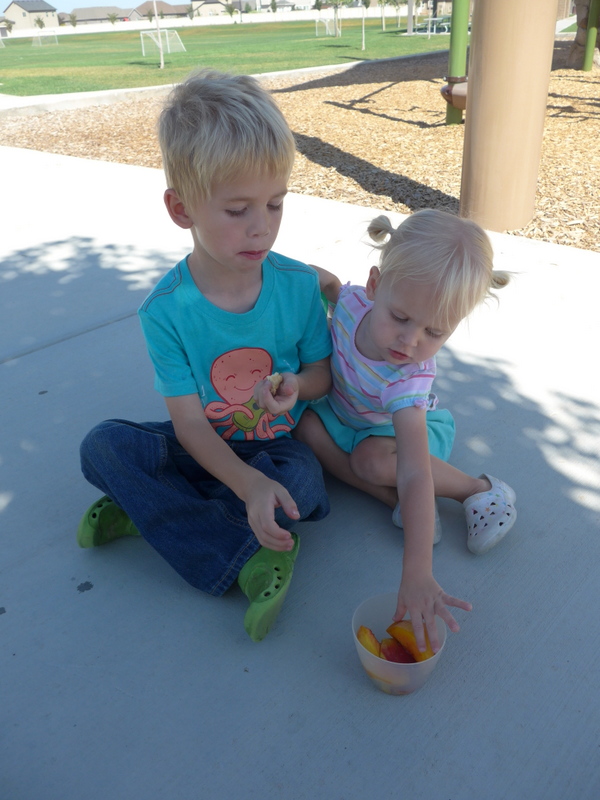 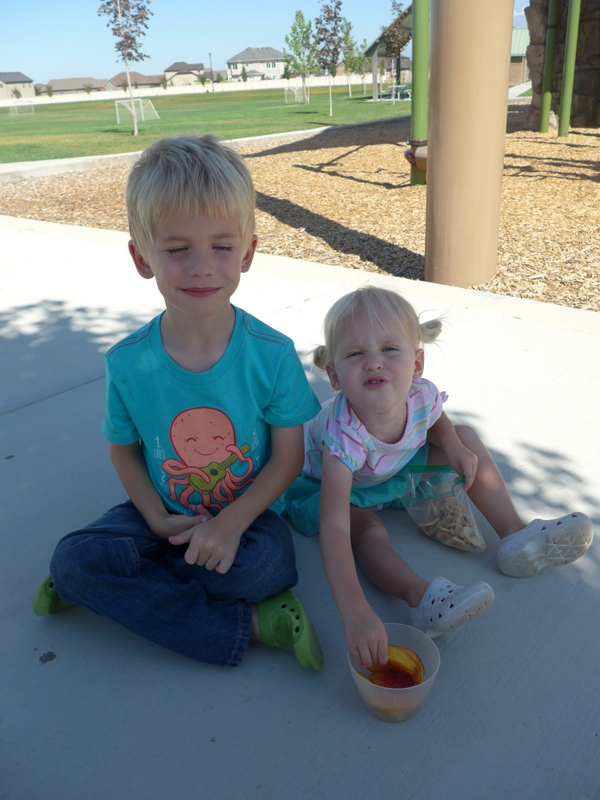 Zoë spent a lot of time "inging," which is one of her favourite things to do. 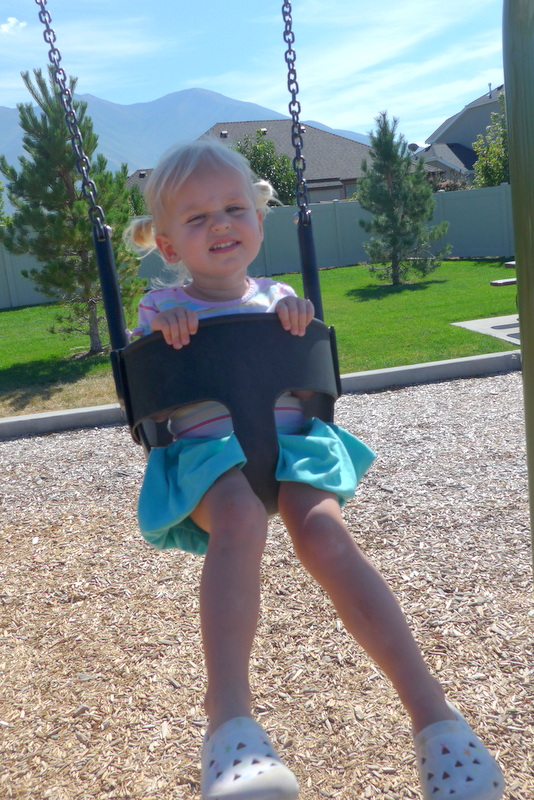 After I told her I was finished pushing she asked to get out so she could play with Benjamin. We were the only ones there and they had a blast on the slides together.

They started sliding down on their tummies, face first, which went relatively smoothly the first few tries: 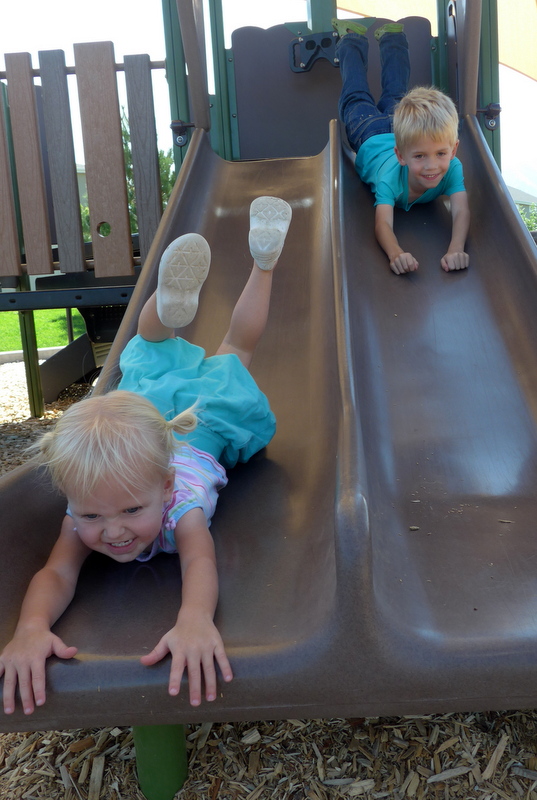 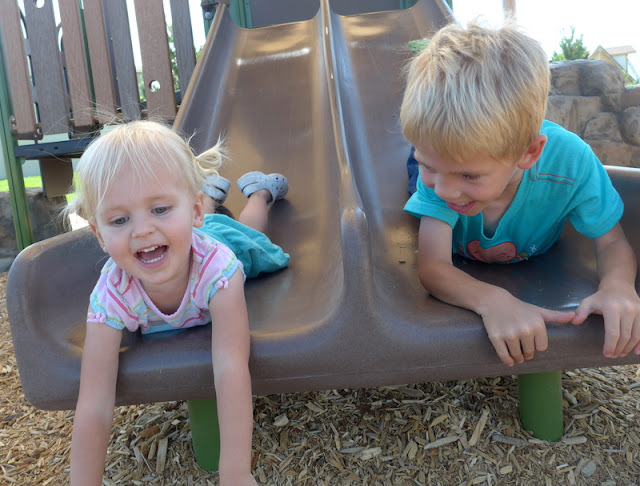 But then Zoë gained a little too much momentum going down... 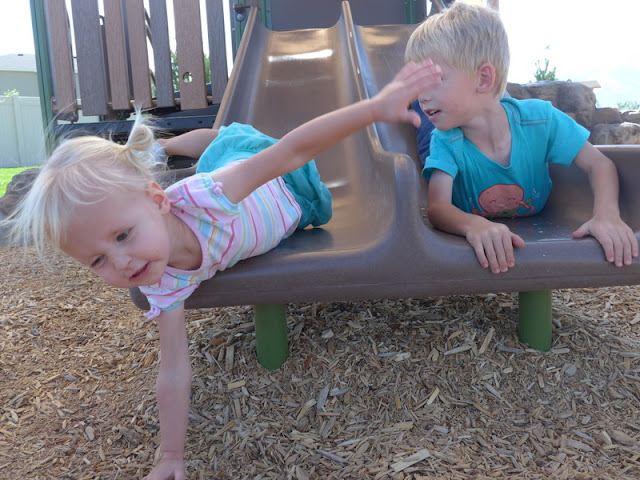 That look on her face when she realized she'd overshot her mark? Priceless.

She managed to catch herself fairly well, though, and ended up like this: 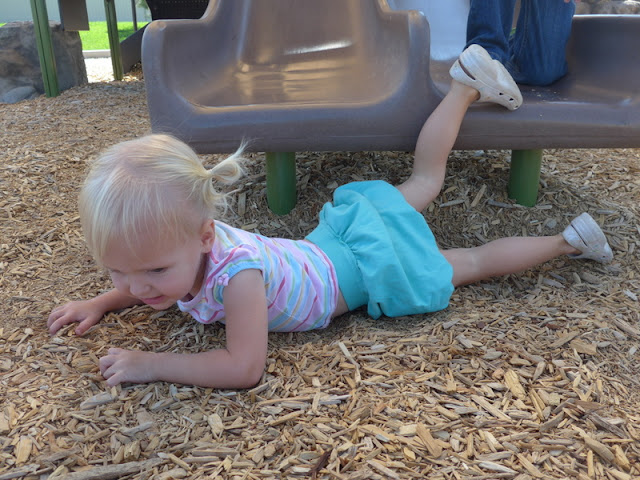 Her fall it certainly didn't prevent her from giving it another go (and there's evidence of Benjamin running up the slide beside her): 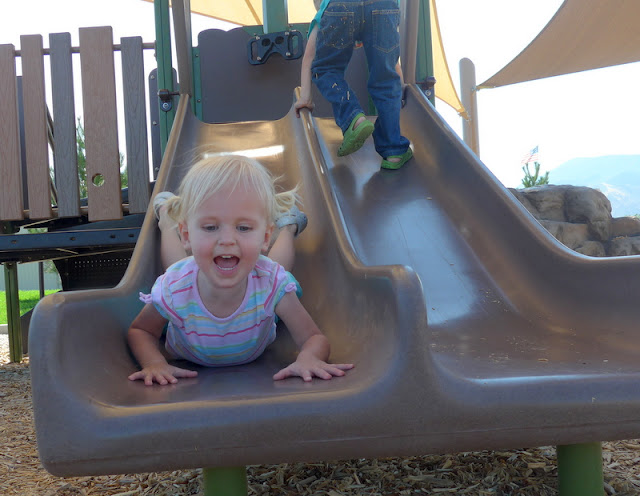 I think he was happy to delay lunch a little bit for a good romp on the playground (though technically we didn't even delay lunch because it was early release day so we ended up getting home around the same time we normally do): 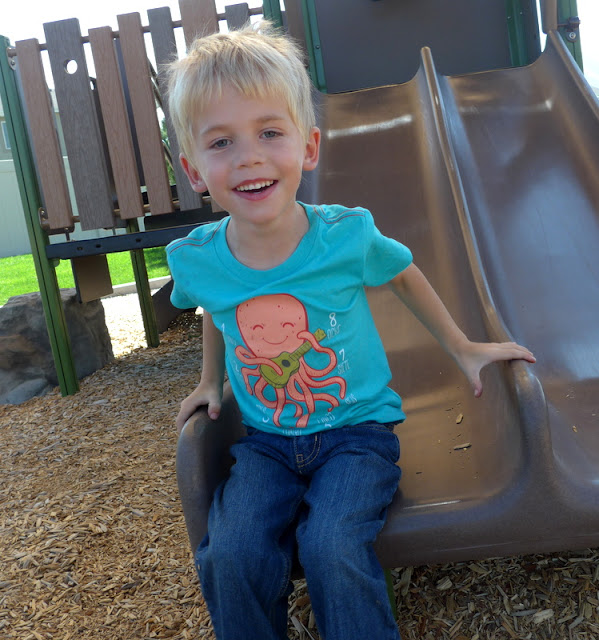 And here are a couple of pictures of Zoë trying to figure out how to scale this rock wall: 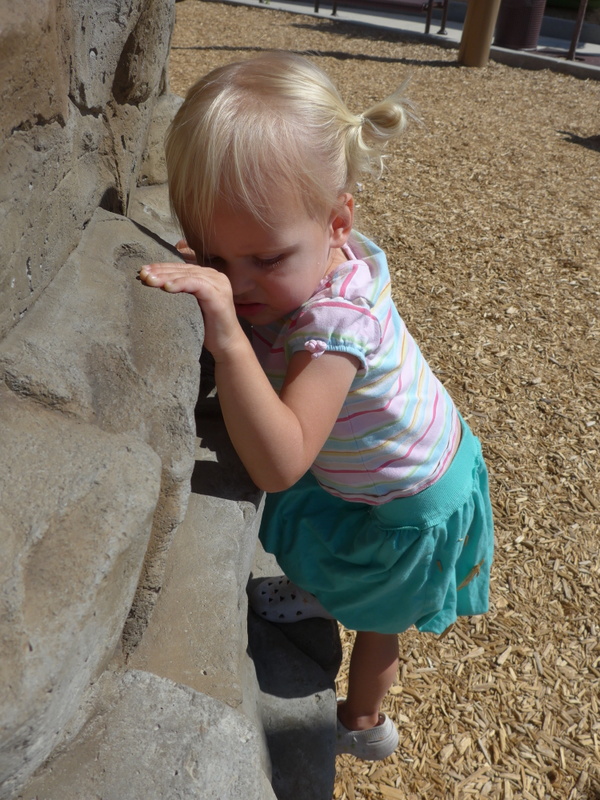 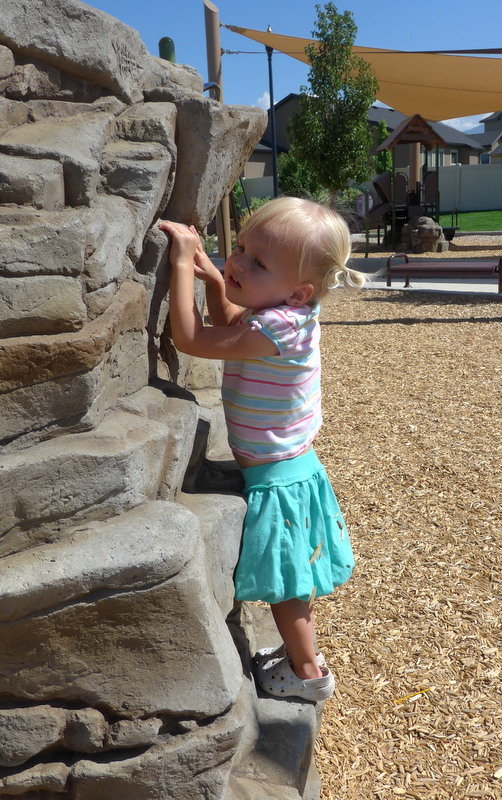 She didn't get very high before she gave up (Benjamin climbed it too fast for me to get a picture of him), but I think wearing shoes that actually fit would have helped. She got these crocs from a friend (whose name is Zoë and who also is two...but whose feet are a couple sizes bigger than Zoë's) and insists on wearing them even though they're still a little too big for her.