Fall is here, hear the yell

Tomorrow's high is 59°F with a low of 39°F (meanwhile, back in Durham it's a high of 84°F and a low of 64°F), and the thing is, the extended forecast doesn't show the temperature going back up. We have a couple of days in the mid-seventies but the rest of the ten-day forecast is filled with fifties and sixties.

There's no turning back: autumn is approaching.

Benjamin asked for socks for his hands while the kids were playing outside today. And when Rachel donned a sweater, Miriam asked why she put on her "winter coat."

Little do my children know all the layers they'll be bundled up in before leaving the house each morning to walk to school—in the snow and cold. Actual winter gear—no makeshift plastic-bags-under-fleece-pants instead of snow pants, no layers of sweaters in lieu of a winter coat, no rain boots insulated by three pairs of socks.

And they'll have proper mittens—not just socks on their hands.


I realize I just said that autumn was approaching but autumn goes by way too fast out here. If there's one thing I loved about North Carolina (and there isn't really one thing because there are many) it's the long, luxurious autumns—autumns you could really sit back and enjoy. Months of lovely sweater-weather; cool, crisp mornings turning into almost balmy afternoons; colourful leaves for weeks upon weeks; tricking my garden into thinking we were in a second springtime and getting another crop of peas and other cool-weather treats like that.

When autumn hits you have to autumn hard before it disappears.

Yesterday the kids helped Grandpa pick (most of) the rest of the peaches from our second peach tree. I can't even believe how many peaches those two trees managed to produce.

We've made peach leather, peach jam, peach butter, peach ice cream, peach salsa, dried peach slices, frozen peach slices and, as of yesterday, canned peaches! And that doesn't even include what we've eaten fresh or given away. Peaches for days.

"I think," I said to Andrew last night as we were working on our fourth batch of jars, "That we'll be eating peaches clear until it's peach season again!"

I guess it is. The tree produces enough fruit to last the whole year and it's our job to make it last. Or something. But, honestly, it's kind of draining...

I was so glad we had four adults helping with all these projects (none of which I actively initiated, I'll be honest (except the salsa)) because I can't really see pulling this off on my own. My cousin Shannon posted a picture of herself on Facebook, completely exhausted, beside two little jars of home-canned peaches.

"After many hours of manual and mental labor," she wrote, "I finally managed to convince the peaches to relinquish their skins and the stove to boil our gigantic pot of water so that I could procure 2 quarts of sad, floating fruit."

She's since managed to can a few more jars, but I must say that after working for a few hours last night—with three other adults—to "procure [24] quarts of sad, floating fruit," my hat's off to her for even attempting the process on her own!

At least I know that with the colder weather that's coming we won't be inundated with fresh peaches any time soon!

And here are our beautiful jars of peaches, just in case you wanted to see them: 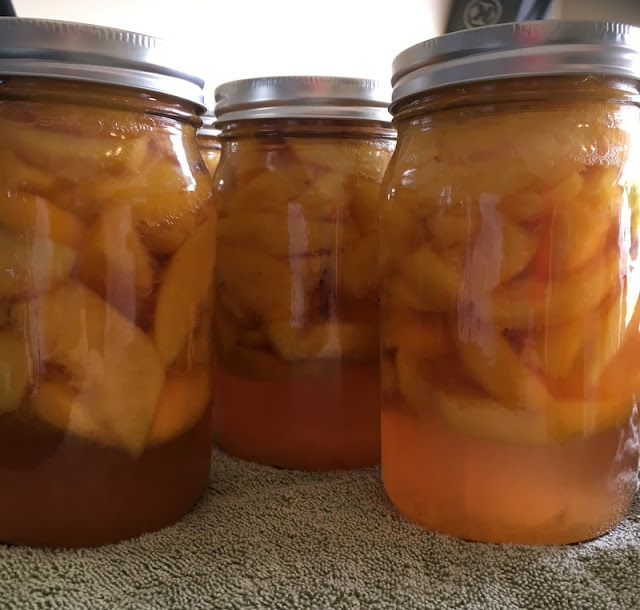 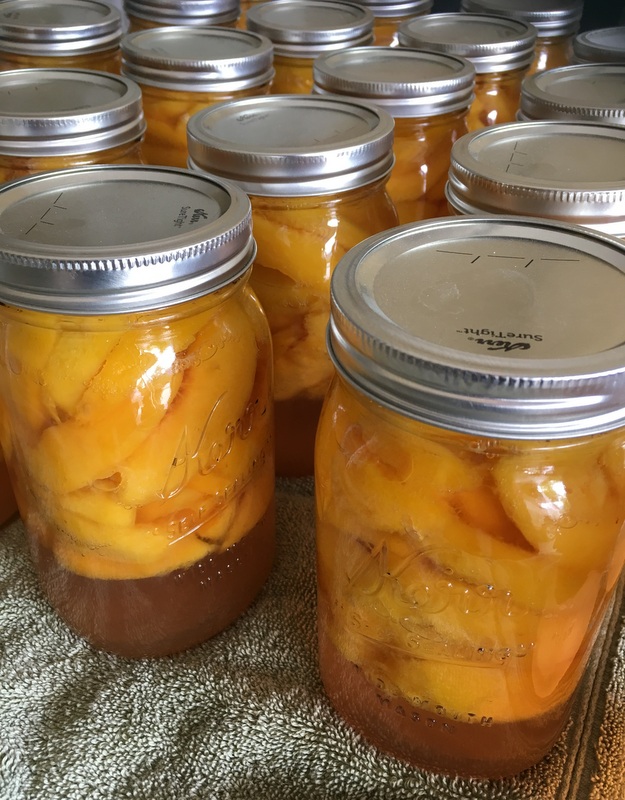