Tonight we went to the MPA opening social, which was supposed to be up in the canyon but, due to the rather dreary weather we had today, was relocated to a chapel in Provo—specifically the "City Center Building." We had an address for the building but when we put that address into Google Maps it deposited us at the Provo City Center Temple, which clearly wasn't where we were supposed to be.

Andrew wandered around a bit, asking people about where the City Center Building might be (and everyone treated him like he was just a little bit crazy and kept pointing to the temple—but, no, luaus are not usually (or ever) held in the temple so that was clearly not where we were supposed to go) while I watched the kids wander around. 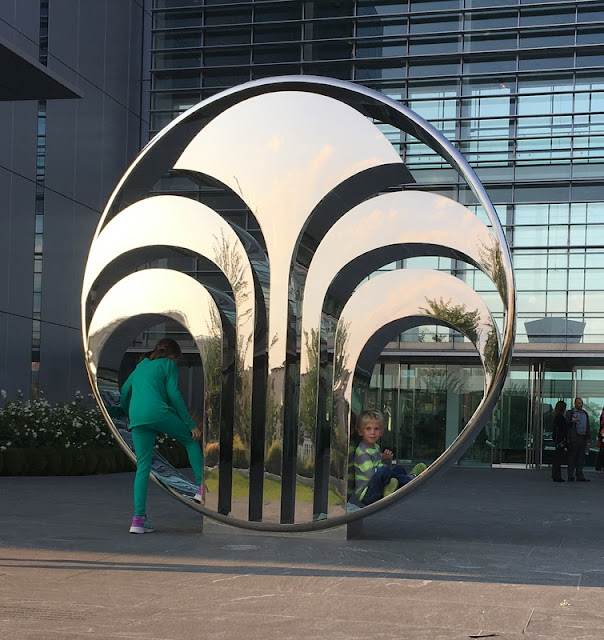 Ironically, I had to convince him to stop asking for directions and let me in on the big secret of the address of the place so we could look at a different map. MapQuest (of all things) pulled through and when I put in the address there I saw a glowing beacon not too far from us so we headed that direction on foot and found a tiny, little chapel tucked away behind some commercial buildings slowly filling with people Andrew recognized.

He sent us inside while he ran to get the car and bring it over.

Benjamin was super excited about the luau and was running down the sidewalk away from me so I hollered at him to stop and he did. In fact, he stopped, dropped, and started meditating on the sidewalk: 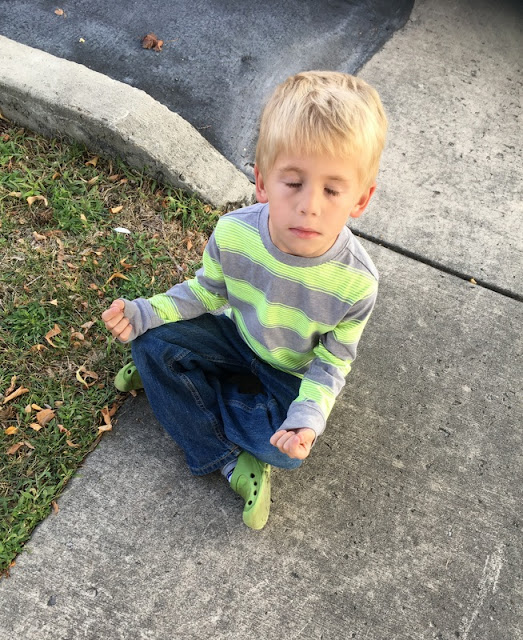 A car full of MPA students was just turning into the driveway (which you can see behind him—it's not like he waited until the very last minute to stop or anything...) when he did this and they all started laughing (which thoroughly embarrassed both Rachel and Miriam).

Here are some rather terrible pictures from the "photo booth": I couldn't get the kids to all hold still and look at the camera. They were all too interested in finding food. 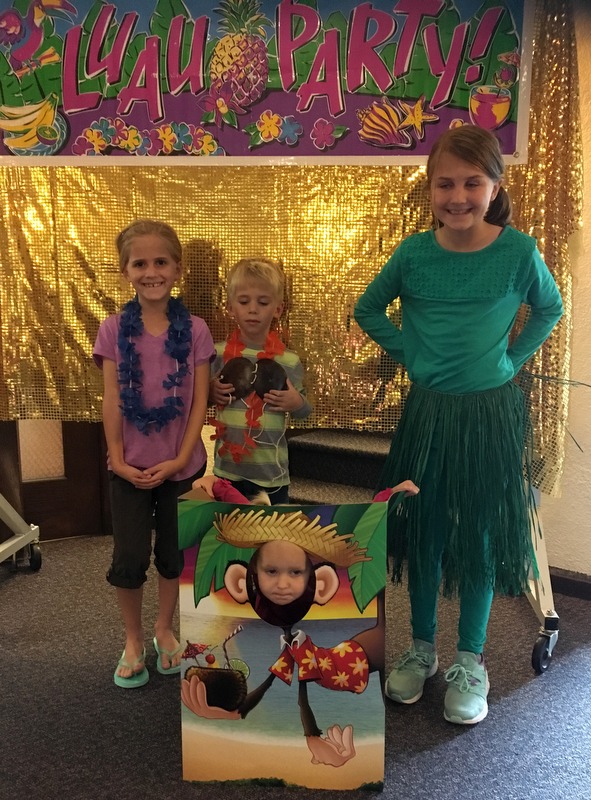 So we went into the gym and immediately got in line for food; by the time we made it to the food table Andrew had already returned with the car so he skipped the line and joined us (which I appreciated because I wasn't really sure how I was going to balance a plate for myself and the little ones and the diaper bag and my baby belly all on my own). I enjoyed the chicken. Everyone else enjoyed the ice cream and cookies from the Penguin Brothers (not that they didn't eat the Hawaiian food; they just didn't seem to enjoy it).

After dinner one of the students treated us to some hula dancing and then invited the kids up on stage for a little tutorial. My kids can be rather shy, so none of them popped up to dance at first. Even Zoë, who was in awe of "Moana" said, "No, me dit," (rough translation: "No, I'm going to continue sitting here,") when we asked her if she wanted to go up. But eventually enough children got on stage that it was no longer intimidating and Zoë convinced her sisters to go up with her.

She was so thrilled at being on stage with "Moana" that she could hardly think, let alone dance. Andrew tried to get a few pictures of the girls dancing (I forgot our real camera at home so these are all from our cell phones, unfortunately): 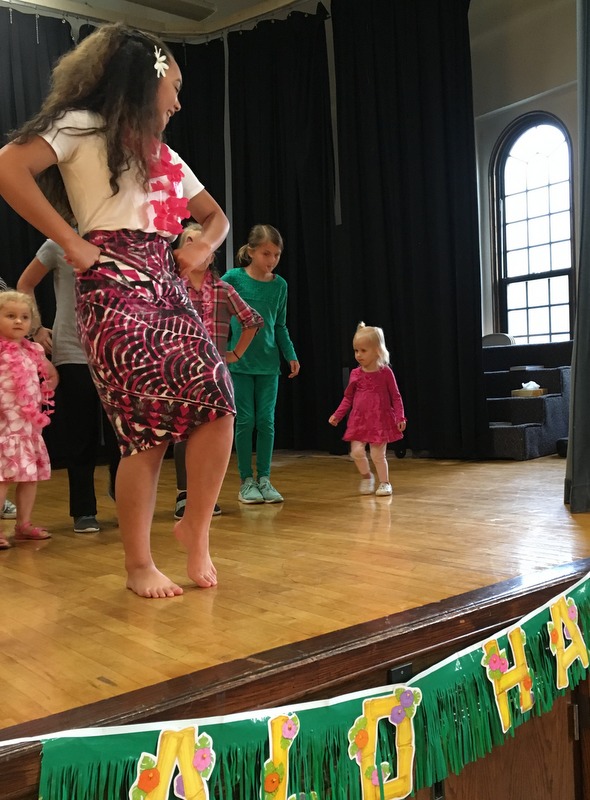 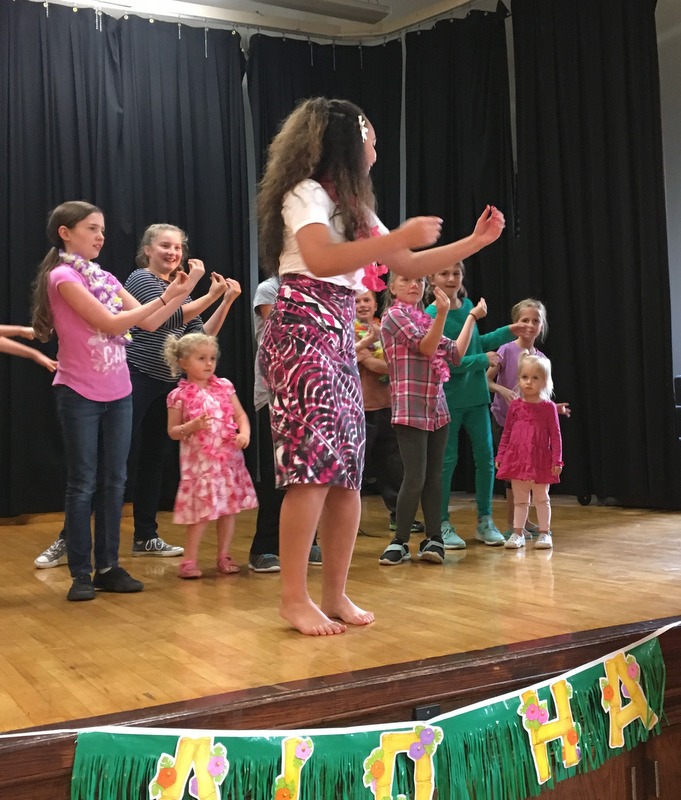 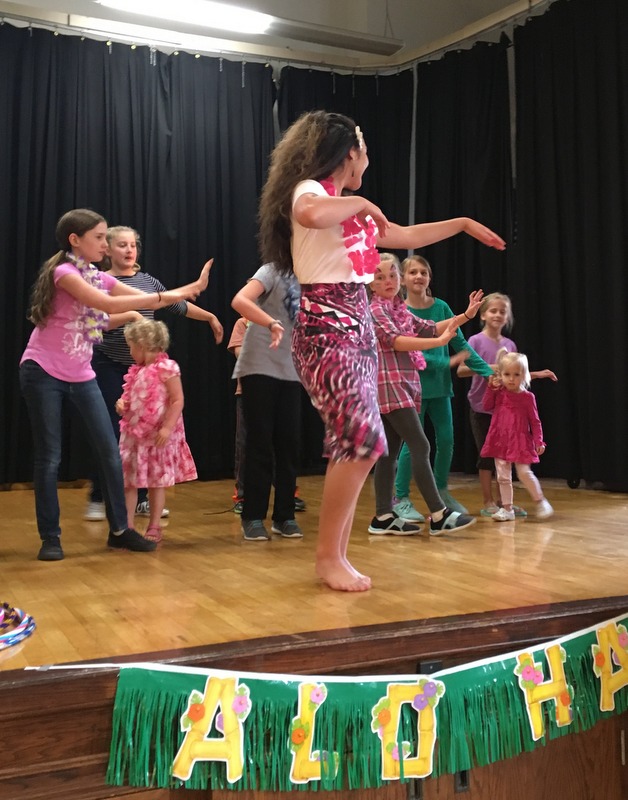 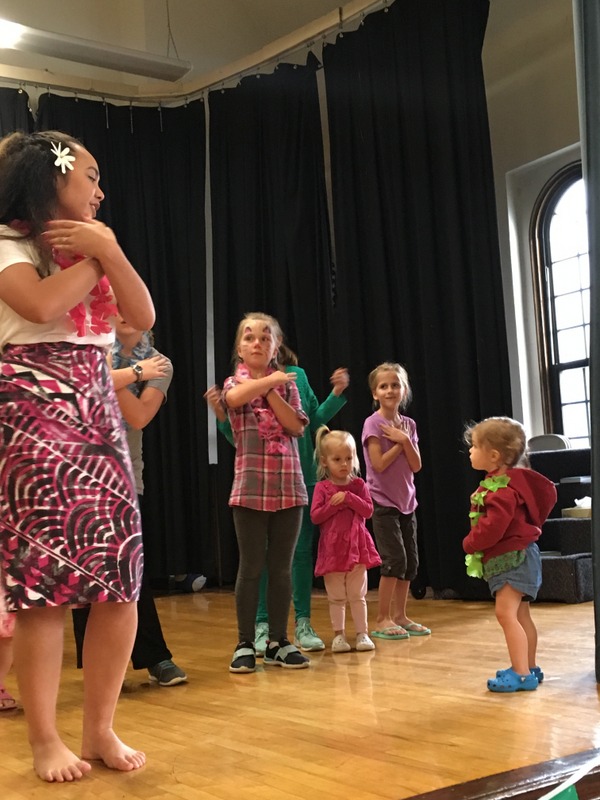 When we got home it was all Zoë could talk about, however.

"Me! Up! Moana!" she kept telling everyone clear until bedtime (which was late because we came home and watched Wonder Woman after the luau and during the movie she kept suddenly remembering that she went up on stage with Moana and would have to tell someone about it because apparently it was the highlight of her life).

When she told Grandpa he asked, "Did you give Moana a hug?"

In response Zoë just stared at him, her eyes growing wider and wider and her mouth growing rounder and rounder (rough translation, "Uh, no...but that would have been brilliant!"). Maybe she can give her a hug at the next MPA shindig.

It was a short and sweet party, but we were glad we were able to (a) find it and (b) attend so that Zoë could have this opportunity of a lifetime.
Posted by Nancy at 2:59 AM