This morning Karen posted a picture of the kids before they headed off to hike Little Wild Horse Canyon with Grandpa, Uncle Jacob, Aunt Shayla, Carter, Uncle Todd, and Kayl.

"You're really worried about this," Andrew said. "There's nothing we can do. They've already left."

"They're new," I said. "So, yeah, I'm a little worried about my five-year-old boy hiking through a slot canyon in his brand new church pants. So sue me."

"There's nothing we can do now," he reminded me (probably tacking on, "So stop worrying about it," in his brain).

Probably because he's been trying to wear them all week. I think he's tried to put them on every morning this past week and every morning I've been like, "Those are your church pants, young sir." And then I've made him choose something else to wear.

Except for Friday. Friday was picture day, so did he pick out a nice pair of dress slacks and a nice, new shirt? No, no. He paired well-worn navy blue sweat shorts (with an orange stripe) with a grey long-sleeve firetruck shirt.

I almost wasn't going to push the issue because I was so tired from our adventure with Zoë and we have never bought school portraits before, but then Karen reminded me that he'd be "that kid" in the class photo. I had forgotten about the class photo and was assuming they'd just be doing individual portraits, but lest he be "that kid," I made him wear his old Sunday pants and actual shoes with his firetruck shirt and he looked great. And then they didn't do class pictures that day anyway, so I shouldn't have pushed the issue. But that was the one day this week that he didn't try to wear his new Sunday pants and I let him wear his old Sunday pants so you'd think he'd have Sunday pants out of his system.

The temptation to wear them when Mom couldn't stop him was too great, I suppose. And without Dad there he "can't even get in trouble" (at least, not when Grandma and Grandpa don't know he's picked out his church clothes for hiking in (they probably would have caught on had they been, like, tuxedo pants so maybe this is a sign we need to get him some even fancier church duds but, honestly, he'd probably never get dressed for church at all if we did that)).

He decided to risk it, I suppose. And he mostly got away with it, too.

Uncle Todd snapped a bunch of pictures of their hike and put them up on Facebook, which I totally appreciate because as much as Andrew and I are enjoying a mostly kid-free weekend, it's also been nice to see that my kids are happy and healthy and well taken care of...even if they're ruining their new Sunday clothes while doing it. 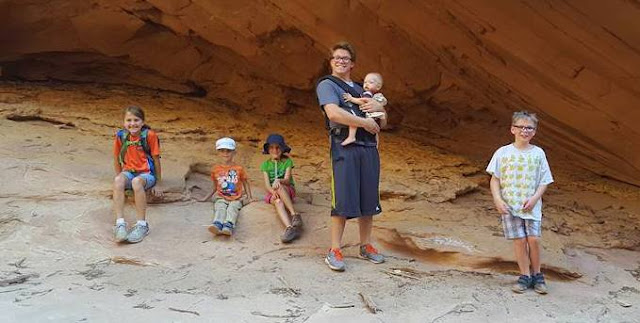 I'm not actually sure what order these pictures go in because, well, I wasn't there (at least not this time around; I've hiked Little Wild Horse with Andrew's family before). It sure looks like everyone had a great time!

When they had reception on their phones again, Andrew got this text message from his dad:


Benjamin had a blast being able to run, climb, fall, and slide on his rear end with almost no restraint. But halfway into the hike Rachel told us he was wearing his new church pants.

"I honestly don't know what they're going to put him in tomorrow," I lamented to Andrew. "The other clothes I packed are definitely not church clothes."

Luckily, they're not really camping. They're glamping (glamourous camping). They kept calling it a cabin before they left, but I'm pretty sure it's a house. At any rate they're "camping" with air conditioning and a washing machine so they're certainly not suffering.

Around 7:00 this evening Andrew got another message from his dad:

Bath time. Ben has been Grovered.

That means that he was covered from head to toe in red dust. We've all been Grovered over the years (except for Zoë) but this was Benjamin's inaugural Grover trip and so I'm sure he did his very best to get as dirty as possible (by having so much fun)! That's why we all tend to build up a collection of "Grover clothes." Sometimes the red dirt is impossible to remove (case in point: this trip (those clothes were never the same colour again)).

"How are his pants?" Andrew asked.

"We washed them and they look great," his dad replied. "However, I forgot my church pants."

We had a good laugh over that.

And hopefully his khaki pants really did wash out well (Grandma is a much better laundress than I am so I'm sure they did) but maybe they should send Benjamin to church in the grungy clothes I packed for him so that he'll match Grandpa. It'll be casual Sunday!

So here, in no particular order (because, as I mentioned, I'm not exactly sure of the order) are some pictures of everyone hiking through the canyon:


They still have a few more days of adventuring ahead of them and while we're a little jealous that we're not there we are thoroughly enjoying the peace and quiet here at home!

* He's also wearing the same shirt he had on yesterday when he left. Why? I don't know. But I also don't really care about that and probably would have let it slide as well because (a) it's Grover and (b) less laundry for me. Still...Sunday pants and yesterday's shirt? Nice work, Benjamin, nice work. (It's nice to know you still need your mother).
Posted by Nancy at 1:22 AM