Emily's been feeling anxious for the birth of her baby (I, uh, don't blame her) and was going to ask her doctor to strip her membranes at her appointment on Thursday to try to get the ball rolling. But then she was feeling so uncomfortably itchy and had such a pain under her ribs that she decided she'd better make an effort to see her doctor today, which she did, and was subsequently diagnosed with prenatal cholestasis.

Basically, she had a buildup of bile in her liver (probably due to those darn pregnancy hormones *shakes fist*) and so bile acids leaked into her bloodstream.

Other than some sharp pains in the liver-region and intense itchiness (due to the bile acid in the blood), this poses no risk to the mother. Unfortunately, it carries a greater risk of stillbirth for the baby and there really aren't many great treatments available other than delivery. Since Emily was coming up on 39 weeks (I believe she's 38 weeks 5 days) her doctor didn't hesitate to schedule an induction for her at all. Emily was a bit nervous because she'd never been induced, but by 5:30 this afternoon she found herself in the hospital getting hooked up to...something (pitocin?).

Karen immediately started packing to head up to Idaho when she heard the news. She arrived at 8:15 (Marsha, Morgan's mom, went over to take care of the other kids after she got off work—update: that was the plan anyway, but they weren't able to get in contact with her so Emily drove herself to the hospital and got things started and Morgan stayed with the other kids until Karen arrived!) and Emily had the baby at 9:57, which Andrew views as an unfortunate accident. Had Emily waited only 2 hours and 3 minutes more, Arwyn would have been born on Andrew's birthday.

Tough luck for Andrew, though, because the baby was (a) a girl and (b) born two hours too soon.

To be fair to Emily, she does not feel the baby was born two hours too soon and is grateful labour is done with. Now she just gets to enjoy this cuteness: 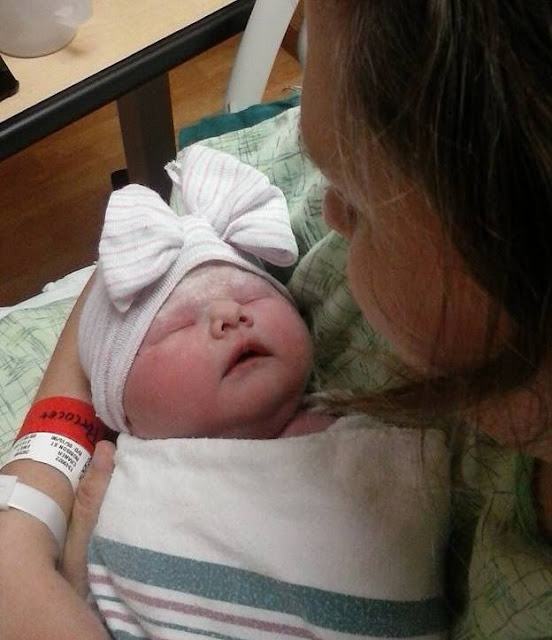 Arwyn Delsa born at 9:57 PM, 8 lbs. 6 oz. and 21 inches. She's beautiful—and just what Emily was hoping for (and part of the reason Emily didn't want to find out the gender). With Logan, Maren, Gavin, and Arwyn she's got a nice little brood of boy, girl, boy, girl (that's cozy, isn't it?).

Now, Delsa, in case you are wondering, is a family name—Karen's mom's name, to be precise. As for Arwyn? Well, that's obviously a riff on Andrew's name.

The evidence is irrefutable.
Posted by Nancy at 1:31 AM