We missed celebrating Andrew's birthday yesterday because he had to work late; he was gone before we were up in the morning and came home after the kids were in bed. Today, although he missed dinner—which was super fancy (grilled cheese and tomato soup from a can)—he was home in time to have a little family party before bed.

Dinner was a little rushed because the kids had doctor appointments after school, which we didn't finish with until nearly 5:00, and Rachel had Activity Days at 6:00. She helped me make dinner and we were sitting down to eat by 5:30. Truthfully, I haven't made tomato soup in ages but we might be making it more often because my most picky eater (I'll let you guess who that is (just kidding: it's Zoë—duh)) tasted her bowl of soup and said, "Oh, Momma! Dis nummy!" and slurped down three bowlfuls!

Never mind the fact that Miriam is a dedicated tomato soup hater. If Zoë will eat it, we'll be making it. 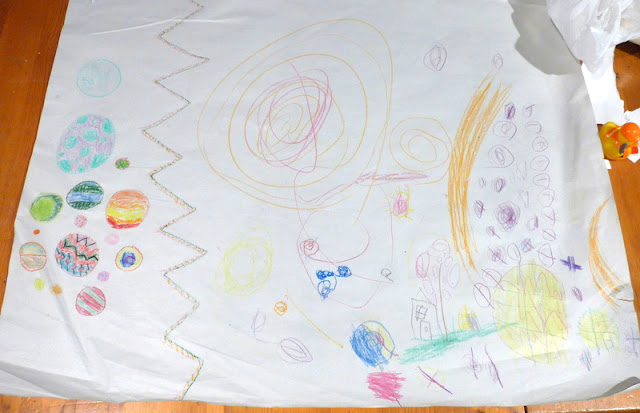 Benjamin also drew this picture for Andrew (it's a pirate ship): 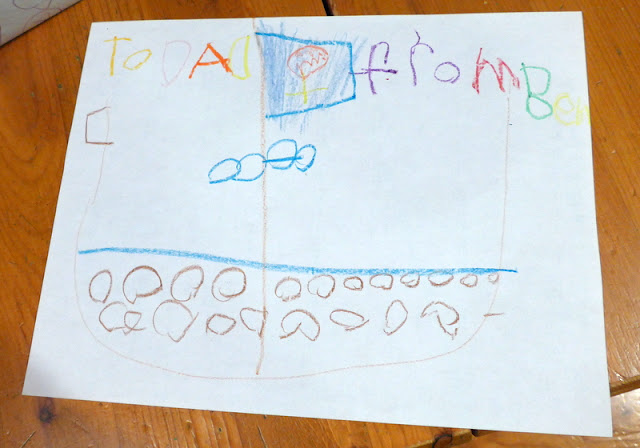 Andrew beat Rachel home by a few minutes, so when she had joined us we headed inside for Andrew's birthday treat. Inspired by the Penguin Brothers' ice cream sandwiches, the littles and I made chocolate chip cookies this afternoon so we could make our own ice cream sandwiches. We used this recipe and I honestly don't know where I went wrong (though I will have to investigate) because my helpers and I measured rather meticulously...but my cookies went completely flat.

At any rate, Andrew had only requested soft cookies (because hard cookies are ew) and these cookies were plenty soft. So I guess that's a win.

All my pictures turned out blurry and grainy, so excuse the quality. I'm keeping them anyway because they're the only ones we've got.

Zoë was so excited about another birthday that she blew out the candles as soon as Andrew had them all lit. No one saw her preparing to do this...except for me with the camera (and I didn't even notice until it was too late to stop her): 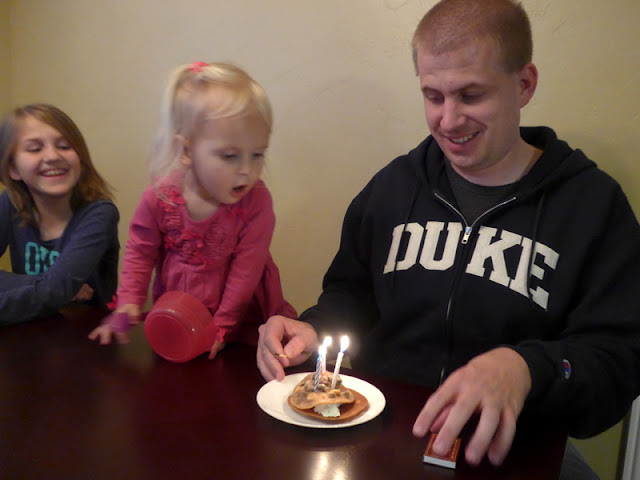 Here's everybody laughing about it while Andrew relights the candles and Zoë acts a little sheepish: 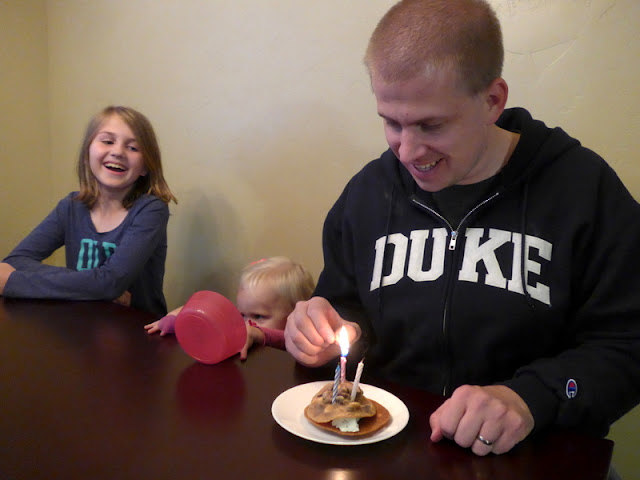 And here's Rachel holding Zoë back from the flame while Zoë is screaming, "Heeeeey!": 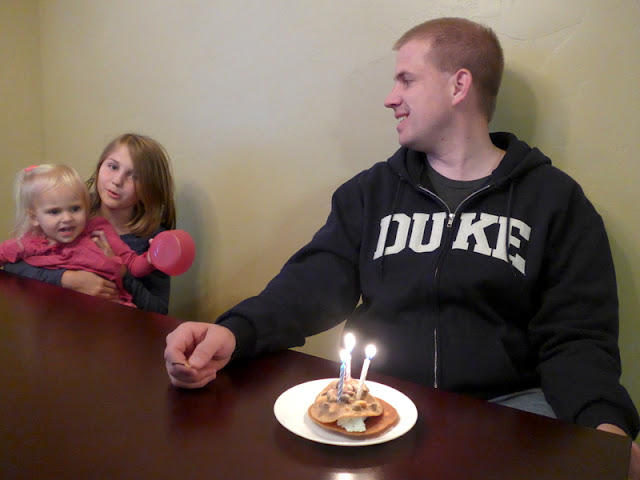 Andrew invited Zoë over to help him blow out his candles after we'd finished singing to him (he got three candles because he's 33 (one of my favourite numbers to say in Russian: тридцать три (tridsat’ tri)). 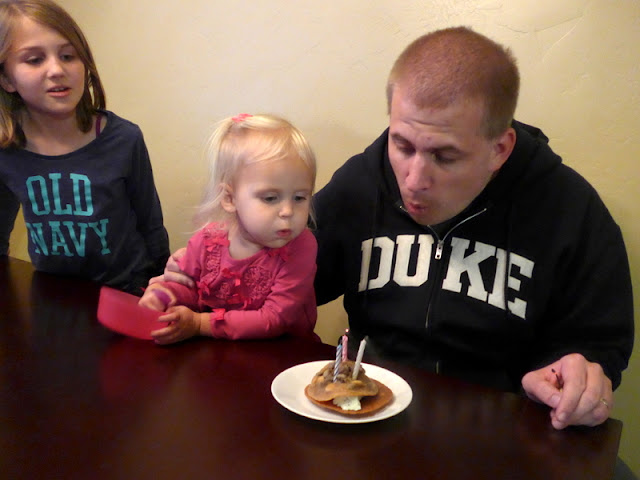 Here's Andrew opening his gift (that he picked out for himself at Costco a few weeks ago; it's fine): 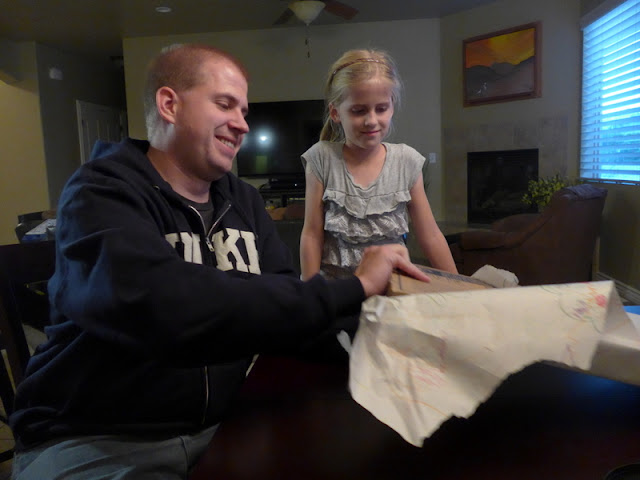 And here's Miriam lamenting, "My work!": 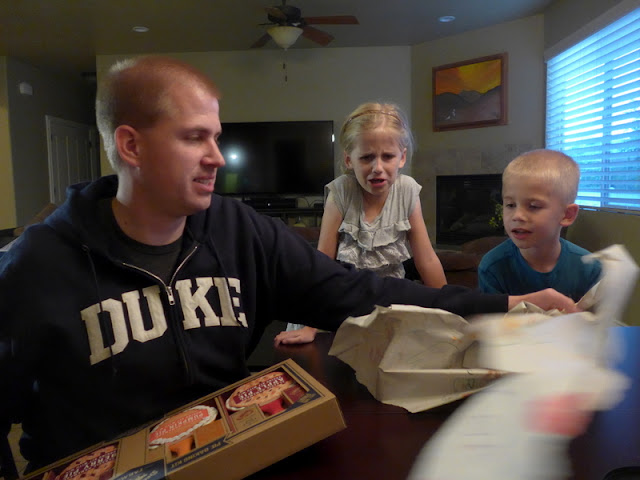 It's a little set of mini ceramic pie pans, which actually might come in handy during Thanksgiving (because everyone always wants a million different kinds of pie but no one can ever eat all that pie): 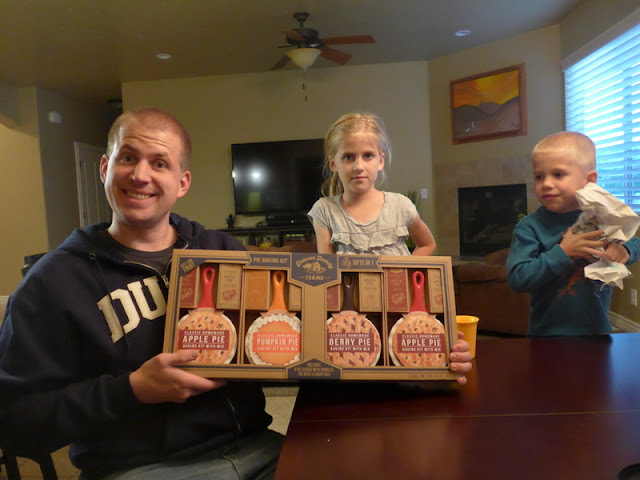 Benjamin, in case you're wondering, is balling up that paper so he can take it to the recycling bin (he's a good little helper).

He was so happy we were able to have a "little party for Daddy on this school night," as he mentioned in his prayer this evening. After saying "school night" he paused for a minute, opened his eyes, and looked at me meaningfully. I nodded gently for him to continue (yes, son, you used that phrase correctly). I didn't realize that he'd been so confused about what "school nights" were until this morning when he asked me if last night had been a school night.

"What are school nights even for?!" he asked angrily.

"It just means you have school the next day," I explained, handing him a clean shirt.

"That's it?!" he said, completely shocked.

Further probing at the breakfast table revealed that he'd been thinking "school nights" were "nights at school," like we were all sneaking off to the school every night for sleepovers or disco parties or some other exciting thing, leaving him asleep in bed—missing out on everything—before sneaking back home to wake him up for the day.* Not that he suffers from FOMO (fear of missing out) at all...

Anyway, it was nice that we were able to have a little party together to celebrate our hard-working daddy, even if we weren't able to do it on his actual birthday.

*This theory does explain why I'm always so tired, though. It's this double life I'm living: by day, a busy mom, but by night, a school-hopping socialite. It's all these school nights that are doing me in. That's it...
Posted by Nancy at 1:53 AM