Last night we had a little family get-together at my Uncle Bruce's place in Salt Lake. My Auntie Arlene was in town, having just dropped her granddaughter (Lexi) off at BYU-I, so we got together for dinner (courtesy of Aunt Sara) and visiting. My mom's cousin Mary came with her daughter Debby and one of her sons, Gordon and Louise came, Carlie and Mike, Kelli and Allen (and Allen's mom), Andrew and I and our four kids, my mom and dad with Patrick and Josie, Uncle Bruce and Aunt Sara along with (Sara's) Benjamin and his fiancée, and, of course, Auntie Arlene.

Sara said she was expecting about thirty people, so twenty-five isn't bad!

Zoë had fallen asleep on the way there and was super grumpy when we made her wake up. She spent the first hour or so shunning everyone, which was a real shame because as the only baby figure there she was garnering a lot of attention.

Louise sat down on a couch near me while I was cuddling Zoë on my lap and I had just finished saying something about how it takes her a long time to warm up to people when Benjamin came into the room, waltzed over to Louise, and clambered up beside her.

"He is also mine," I said, and then added. "They're pretty much polar opposites when it comes to meeting new people."

"I'm gathering that," she said as Benjamin made himself nice and cozy on her lap. 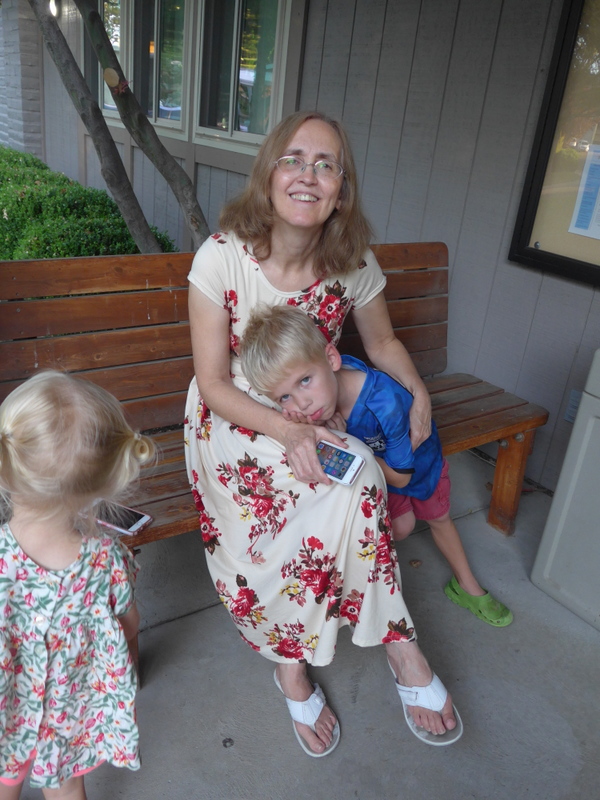 Auntie Kelli brought some fun things for the kids to do (a parachute and some oversized boxing gloves), which they were excited for because I had only had them bring boring ol' books (they love reading but...boxing is also fun (and is more of a group activity)). She thought Benjamin would be the most excited about the boxing gloves because, not only is he super friendly, he's super energetic as well. And he was excited about the boxing gloves when he was the only one wearing them and was making the rounds punching everyone. However, when other people started to use them to punch him he found them a little less fun.

Every time he got hit he'd throw himself dramatically on the lawn and start fake sobbing. So he sat out and watched everyone else play. 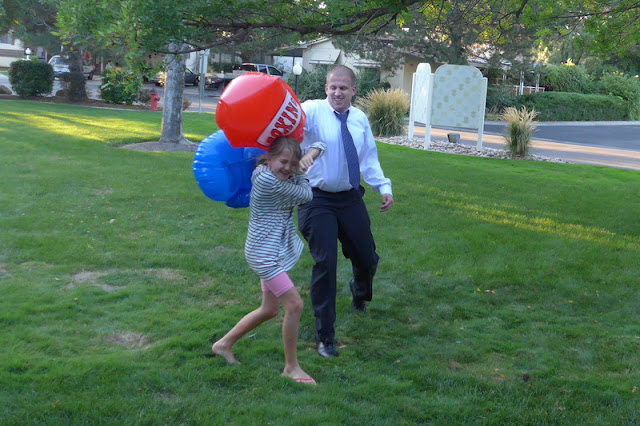 Zoë, who I don't have a picture of, would run out in the lawn taunting everyone with a forced, "Hahaha!" and they'd all come and hit her with the gloves until she'd eventually be knocked over. And she loved every minute of it. She was laughing so hard she could hardly breathe.

When I came outside to see where everyone had gone Zoë picked up a stray glove, ran over to me and begged sweetly, "Hit me, Mommy! Hit me!" 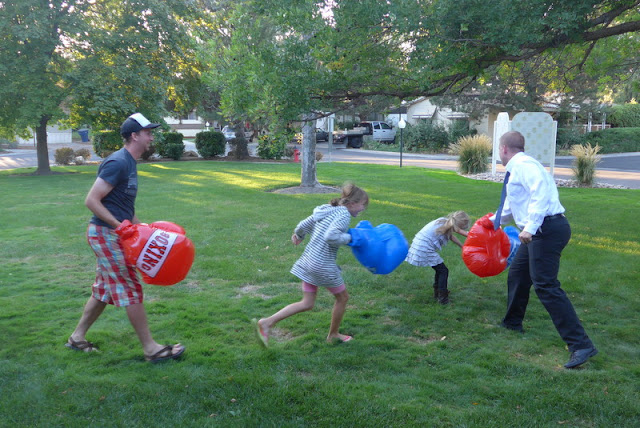 It was so good to see so many relatives after missing the Hancock reunion this past summer!

Here are a few pictures taken right before we left:


A fun time was had by all!

And I gave away an entire bag of peaches (we're still drowning in them if you want some).
Posted by Nancy at 11:55 PM