A "brush" with regional variation

I've lived in the United States for several years now—nearly 20!—and my language has adapted accordingly. Now when I go back to my small town I can hear an accent that I couldn't hear before, that I didn't realize I had. So I know that I've been...gulp...Americanized. But I also know that I don't quite sound American because there are some Canadianisms that I've clung to (or that have clung to me).
I feel comfortable, for example, calling markers 'markers' (even though I grew up calling them 'felts' or 'felt-tipped pens' or 'felt-tipped markers'), but I just can't say (or even spell) 'coloured pencils' without cringing (because I have to stick that /u/ in there, which, yes...is an active choice I made years ago).
They are 'pencil crayons,' and always will be.
I am not even sure if that's one that I'm clinging to purposely or if it's just so ingrained in my mind that I the new word hasn't been able to unroot it.
Another word Americans find strange, which I know I've kept, is 'housecoat.' It's not a word that's used often enough that I've replaced it in my lexicon. If I go to Amazon.com and look up 'housecoat,' I will only see American-style 'housecoats,' which...is not necessarily what I mean when I say 'housecoat.' Because what I mean, according to Americans, is 'robe.'
On the Canadian website, I immediately see what I'm thinking about when I say 'housecoat': 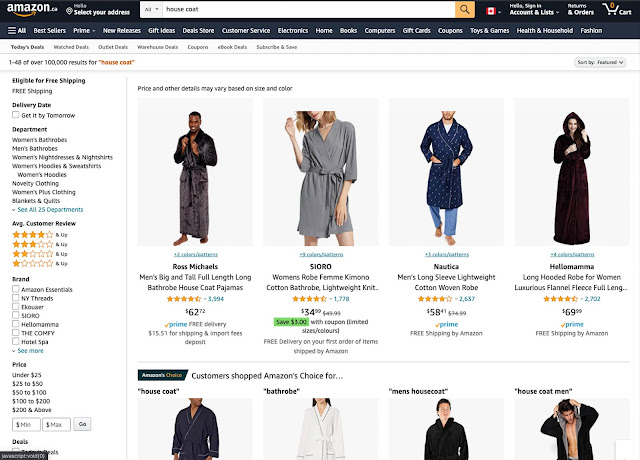 On the American website, I get these (which I guess still qualify as housecoats but which are very much not what I would be looking for when searching for a housecoat): 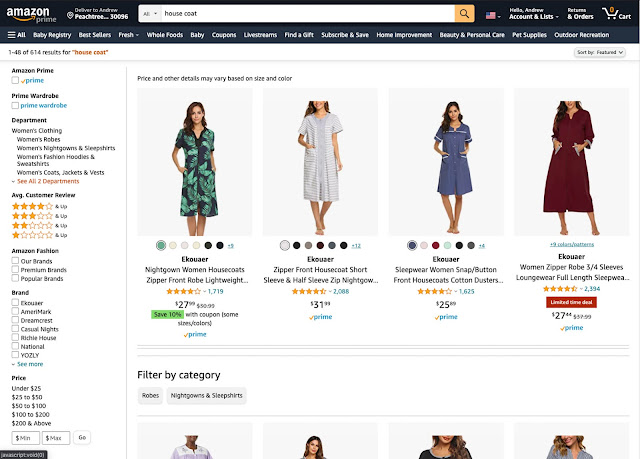 Anyway, all this is to say that this afternoon Andrew was flattening an empty box to put it in the recycling and I said, "I wonder what happened to the rest of those brushes."
"Brushes?" Andrew asked.
"Well, they put four on the whiteboard, but I think it was a pack of twelve or something. I'm sure someone will know where they are when we need them."
"What?" he asked again, and then looked at the box. "Oh, you mean erasers."
"Sure," I said.
"No one calls these brushes."
"Well, why not?" I asked. "If we call them chalkboard brushes, surely they can be called whiteboard brushes, too."
"N..n...no one calls them chalkboard brushes," Andrew stammered.
"Oh, everybody does," I said, tsking at his silliness.
"Literally no one does," he insisted. "They're erasers. Chalkboard erasers. Whiteboard erasers. I mean, it's not like you're going to comb the board with one of these. You're going to erase the board."
"I didn't say comb! I said brush. You're just going to...brush it off..."
"With an eraser."
"Sure. Or a brush. Either way."
"Not either way! No one says brush!"
"I swear I say brush! At least some of the time...I don't know... Why would I be saying it if it wasn't a thing?! Surely it's a thing!"
"It's not a thing."
"But it feels so...normal...for me?"
"It's not normal."
Here's the thing about living in America, especially when you come from a country shares quite a few similarities with it, both linguistically and culturally: when there are differences, sometimes it feels a little like craziness because Americans are so unwilling to accept that you might have a different normal.
Like, I remember this one linguistics course I took at BYU and I had this friend in my class from New Zealand. Her name happened to be Nancy. Anyway, when we had to transcribe things phonetically, she was always able to get the TA to bump her grade up by saying, "Well, in my country...that's how we say it." But when I tried that I always got, "Canada is similar enough to the US standard dialect that it should be no problem for you."
For the record, I still pronounce been as it is written /bin/ (that's BEEN, rhyming with bean or seen), not /bɪn/ (to rhyme with bin or sin). You can hear the difference here.
So, yes, I got that word marked wrong with an "You should have known" from the TA, while the other Nancy got that word marked correctly because "in her country," a far more exotic sounding place than boring ol' Canada, "people say it that way." Even though in my country, people also say it that way.
Not that I'm bitter. *Ahem*
Anyway, I did a little search on Amazon and found, once again that the Canadian website immediately gave me what I was looking for when I searched for chalkboard brush (although the brushes are all branded as "erasers") while the American website, predictably, did not.
What you see if you search for chalkboard brush on Amazon.ca: 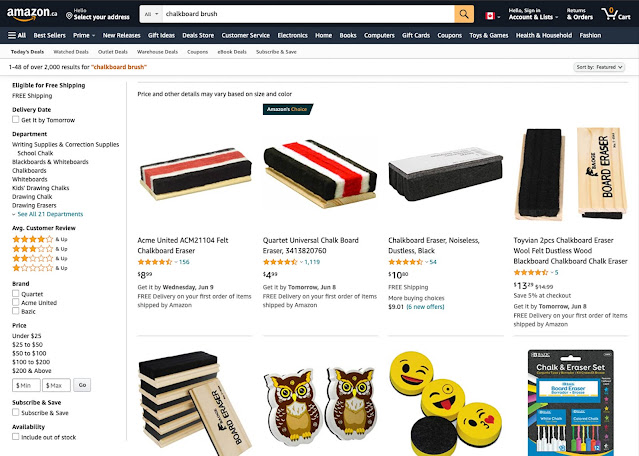 And what you see if you search for chalkboard brush on Amazon.com: 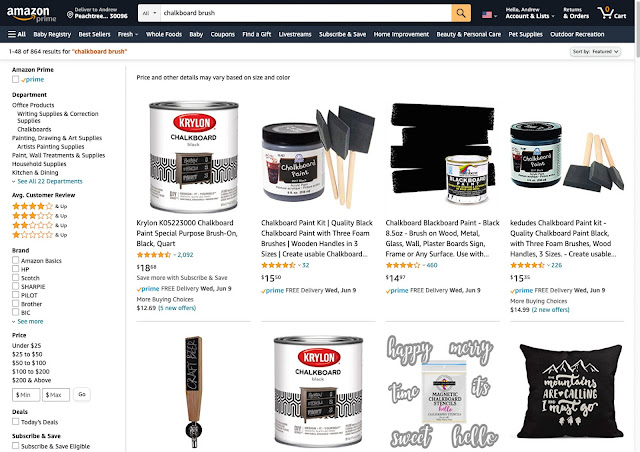 Now, if you do a Google search for chalkboard brush, you can find such things branded as brushes. For example, at Staples.ca they sell chalkboard brushes that are proud (or completely unashamed) of the fact that they're called brushes: 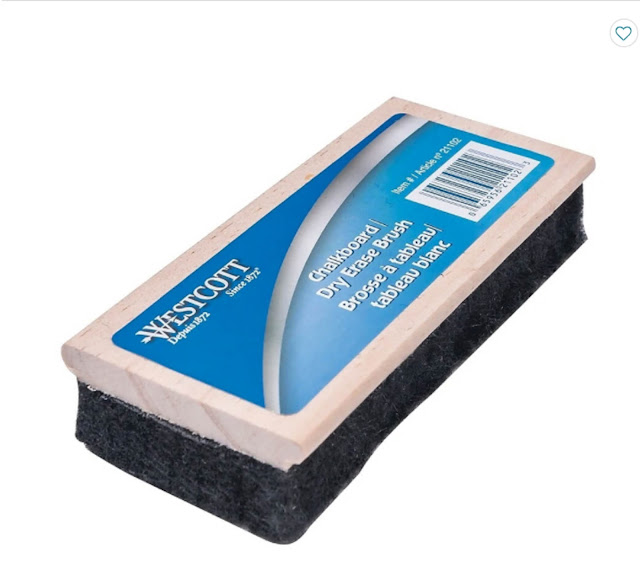 All this is to say...not very much...except that I think it's so interesting that I can still be blindsided by these differences 20 years later!
Posted by Nancy at 4:24 PM