This is a little story that Alexander assigned himself to write. I don't usually give him assignments to do because (a) he's not technically in kindergarten yet, (b) I have my hands full with the kids who are technically in school, and (c) he has been doing a fine job learning on his own. He's very on board with unschooling (which means self-directed (rather than teacher-directed) learning) and is picking things up left and right. He can read, he can write, he can add and subtract, he does typing and coding lessons on the computer, and the other day we had a rather in-depth conversation about the phonetics of Arabic. At least...as in depth as one can get with a five year old...who was having trouble grasping how to say the sound "وو" (he's been learning the Arabic alphabet on Duolingo because...he wants to).

"That's right! Wāw says /w/ and wāw says /oo/ so if you wanted to write the sound woo it would be wāw, wāw."

(و the letter is pronounced "wow" or wāw).

Anyway, after doing ten minutes of "Minecraft Focus Time" (which is a thing in our house for several children now), he settled down to write this Christmas season (which is saved as Chris Miss Ligo on the computer). 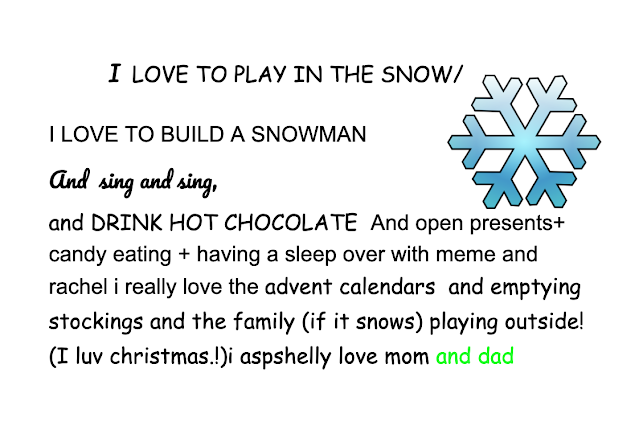 I LOVE TO PLAY IN THE SNOW
I LOVE TO BUILD A SNOWMAN
And sing and sing, and DRINK HOT CHOCOLATE And open presents+ candy eating + having a sleep over with meme and rachel i really love the advent calendars and emptying stockings and the family (if it snows) playing outside! (I luv christmas!) i aspeshelly love mom and dad
It is really a shame that he figured out how to spell check before I caught all his cute misspellings (I'll have to see if I can find an earlier draft to scavenge his inventive spelling from), but at least here you got to see "aspeshelly" for "especially" and "ligo" for "lego."

He loves figuring out all the ins and outs of word processors—changing font text, size, and colour, adding pictures, and learning keyboard commands.
The other day he saw me looking up the word count for part of my document (on Google Docs) using [command + shift + c] rather than toggling through the menu using the mouse. "How did you do that?!" he demanded. So now he's constantly checking (and reporting) his word count).
Okay, I went through his version history and pulled this up from December 1 (the last time he worked on this draft):
It was christmas morning
I wint
Down
STRS
AND
I
SEE
A ligo
Set
It was a owl lego set
I was happy
I was soprizd
I
I was axsit
Wewoo
I D  LOVE TO PLAY IN THE SNOW/
I LOVE TO BUILD A SNOWMAN.
…AND
And  sing and sing
DRINK HOT CHOCOLATE  And open presents/candy eating/having a sleep orvor with meme and rachel

He's such a sweet little speller!
Posted by Nancy at 9:09 PM