Every year—around October—our Christmas-loving neighbour Jan warns us about needing to get Christmas lights up before it gets too cold and wintery to do so. And every year I giggle about this because...we live in Georgia, not Alberta. That is sound advice in Alberta. Like, literally, if you do not want to get frost bite it's a good idea to get your decorations up before winter sets in.

(My friend's husband ran outside—barefoot, in Alberta, in winter—the other day to break up a dog fight (between their own farm dogs; long story) and ended up with frostbite on both his feet (since he neglected to put on shoes before running out). That's simply not a story I'd expect to hear in Georgia).

But we're in Georgia and it was 75°F yesterday. Here are Miriam and Phoebe feeling very not cold in their t-shirts, even as the sun is setting: 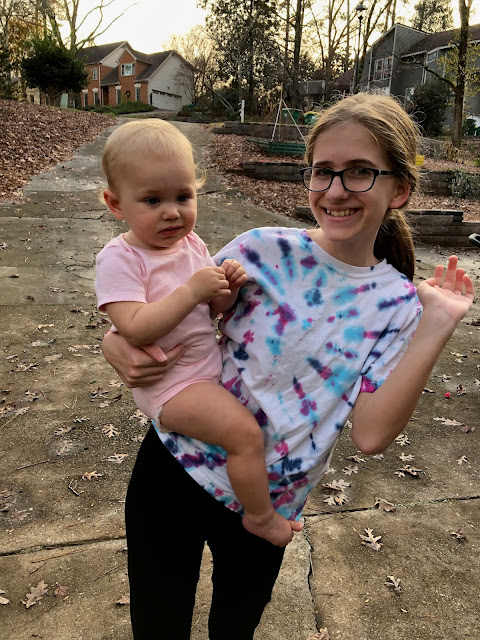 Phoebe is signing "more" in these pictures. She signs more constantly. 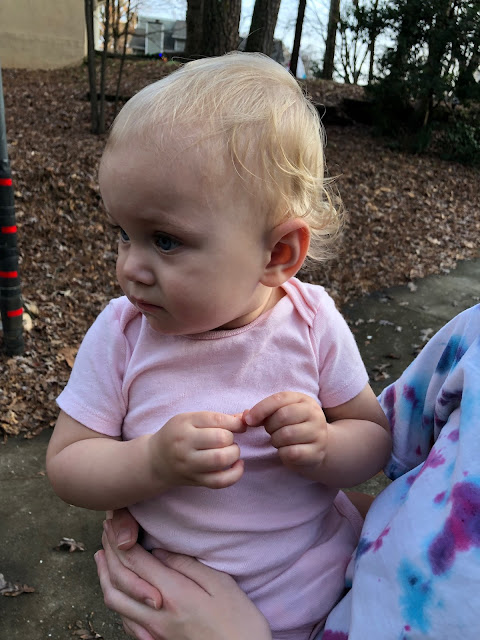 She always wants more of something. More this, more that, more here, more there, more up, more down, more books, more snacks, more milk, more mom, more doing this, more stopping doing that.

Sometimes (often) it's accompanied by little pleas of "this, this," but we never know what "this" refers to, either, so it remains a guessing game.

Sometimes she follows up her "more" with the sign for "please" (which is synonymous with her sign for "wash hands" because she gets those confused for some reason). So then we know that she wants "more" of "this"..."please."

At least she's polite about things!

This has nothing to do with weather or Christmas lights so is still rather off topic, but this evening I was playing golf on the Switch with Alexander and Phoebe, who still prefers crawling to walking, came walking around the corner of the couch into the open area and as she toddled across the room she exclaimed, "WHAAAAAT?!"

It was hilarious—and just the question the rest of us were about to ask! Like, whaaaaat was she doing walking across the room like that? She never elects to walk when she can crawl somewhere (or convince one of her many carriers to carry her).

I'm sure she'll decide walking is cool eventually. But not today.

Anyway, here she is standing (under duress) while Miriam and Rachel work on lights in the background: 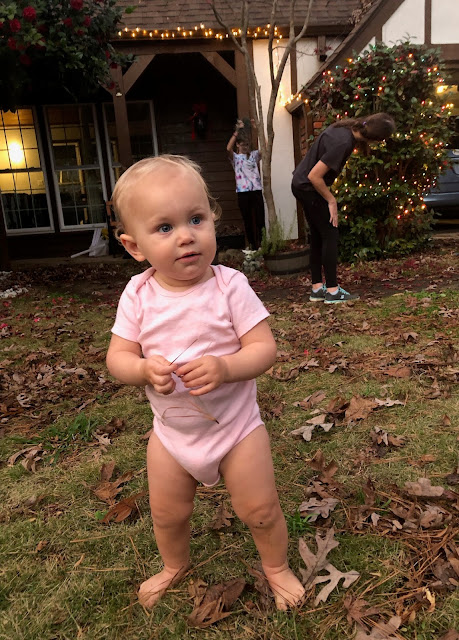 And here she is in my arms which is where she wanted to be (in this case, I guess her little "more, more, more" meant "more up" or "more stop making me stand"): 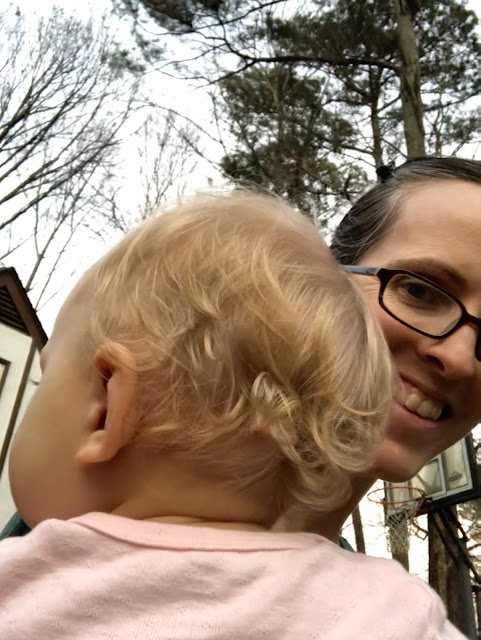 I had to capture her little curls in the back. I'm sure they won't stick around because everyone else has straight, straight, straight hair, but I love them for now.
Anyway, the girls and I spent about two hours putting up Christmas lights yesterday. 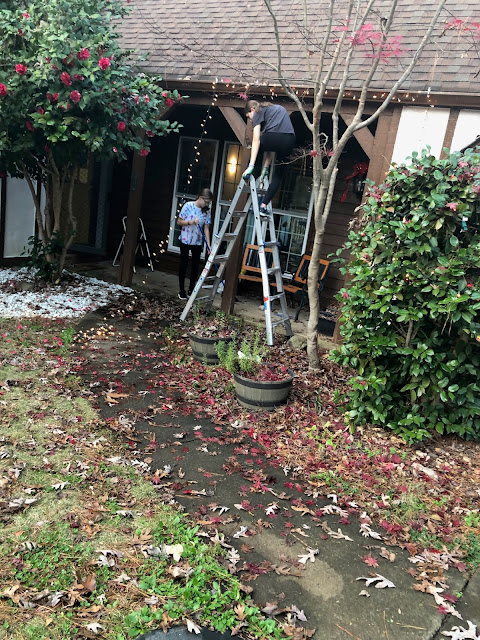 We learned that 50% of the lights we packed up last year decided to retire while they were packed away (I spent a long time switching out bulbs and fuses to no avail). Fortunately, our next door neighbour  had just listed five strands of lights on our local "buy nothing" group, so we sheepishly asked if we could have them, and she gladly passed them on—along with a number of gaudy bows that we used to bedazzle our porch lights.
Here's Rachel working on the lights (and cleaning out the gutters at the same time because she's awesome like that): 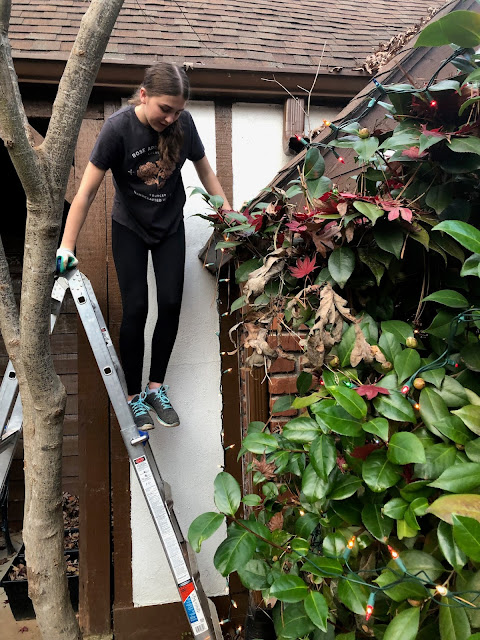 And where were the little kids during this time? Running around the neighbourhood in shorts and t-shirts with the rest of the neighbourhood kids. Rachel and Miriam were worried we wouldn't have time for dinner before Grandpa picked them up for a movie night, but since we were having leftover night, they had plenty of time to come in, scarf down some food, and then head off with Grandpa.
Today I was glad they had all that run-around-outside time yesterday because it rained all day today (they still went outside and got soaking wet, but they definitely played outside more yesterday than they did today).
Posted by Nancy at 12:49 AM