Somehow I think the only record I have of Andrew building our reading loft is in a poem in Paradoxical Glory. In the poem I referred to it as a tree house, I believe, but really he built a reading loft in our basement. And somehow I missed ever writing about it.
If I recall, I think I was "saving" it to write about for when it was "finished."
I say that Andrew made it because that's largely true, but I will probably default to "we" because I helped...a bit. I'm mostly afraid of power tools, so I didn't help too much, but I did help with what I could. Andrew was oddly fixated on power tools when we first moved out here, which I attributed to his grieving process. I mean, he'd used power tools here and there throughout our marriage before 2019, but right around the year mark of Karen's death, Andrew had this sudden desire to really build something.
His mom was the power tool user at his house growing up. She built a bunch of things—a little garden bridge, a picnic table set, cute little American girl doll beds.
He just wanted to build something. And that's not an unhealthy outlet for grief. So we built a loft for the kids in the basement the week after Christmas in 2019 (a little over a year after Karen's death).
Here is pictorial evidence of our nearly finished product (look how little all the kids were): 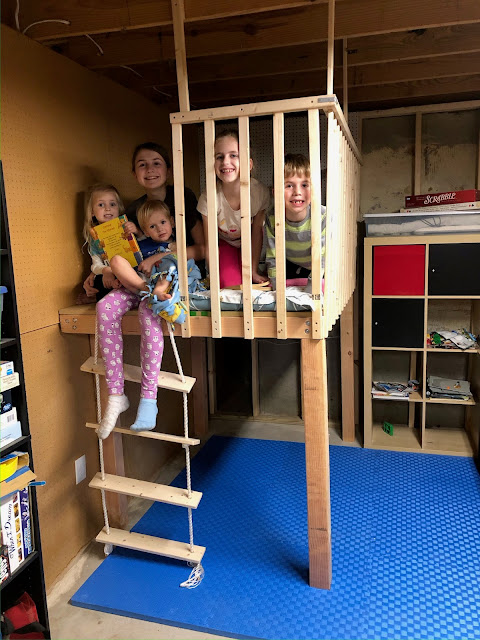 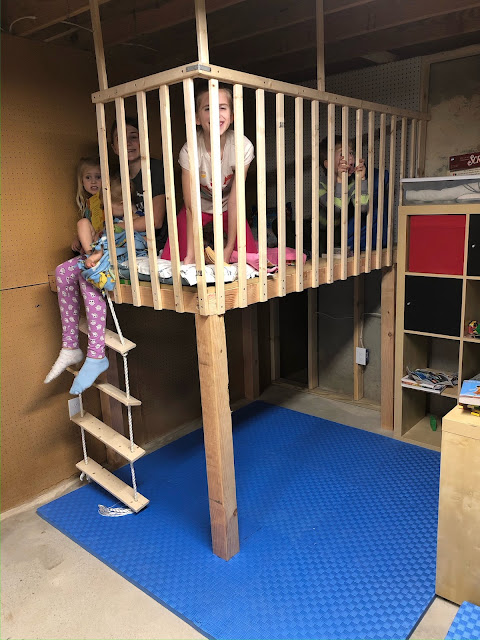 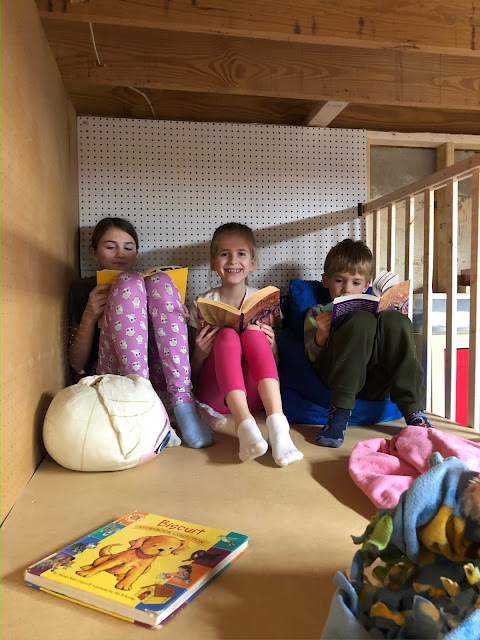 The little fib in the picture is that that rope ladder is not attached to the loft. We couldn't really figure out how to...so...until a few months ago our little baby jungle gym has been under the loft and the kids used that to climb up. But then I took the jungle gym up to our bedroom so that Phoebe can climb and play while I'm working during the day, so the kids have been using a folding chair to boost themselves into the loft. This was all well and good for everyone...except for Alexander...who couldn't get into the loft without assistance.
And...that's just kind of how our loft has been trapped since December of 2019.
Through all of 2020, all of 2021, and most of 2022, our poor loft has been unable to elope.
Because you can't elope without a ladder.
Today, however, was a big day for our basement. I scored a free area rug on my "buy nothing" group. Andrew and I had been discussing the need for a second area rug in the basement and were in a bit of a "race" to see who would get one first—me through the "buy nothing" group or him through watching for sales on area rugs at Lowe's.
I have been putting in my "bid" for every area rug offered for months and today I was finally chosen for one (which meant that I won not only the rug but also the "race" against Andrew; it was a good day)!
Getting a new area rug meant we had to clean the Lego room (always a monumental task) so we could lay the rug down for the kids to play with. They were excellent helpers!
While we were cleaning I thought to myself that I didn't really like how the Lego room was set up at all. I didn't take a before picture (because I never do), but here's a good one from April 2020: 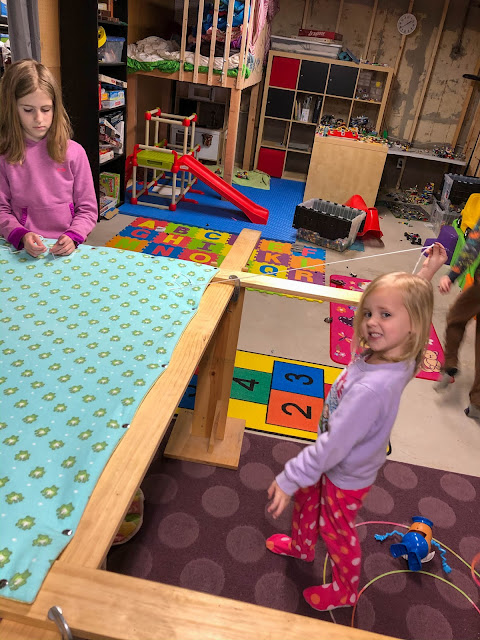 You can see how we have the jungle gym under the loft and a random assortment of foam tiles and hopscotch mats over the cement behind the kids. Then in the lego corner there's a table kind of jutting out into the middle of everything. When we set the room up this way we envisioned the children playing around the table, but that never really happened. So really the table was just in the way of everything.
Today I decided we should move the table out of the way...the only issue being that the table was connected to the shelf...so if we moved the table, it only had half the legs it needed to be a functional table.
So Andrew helped me make some legs for the table and we moved it into the corner and then put up some "walls" around the edges to keep Lego from falling off of it in the back and sides: 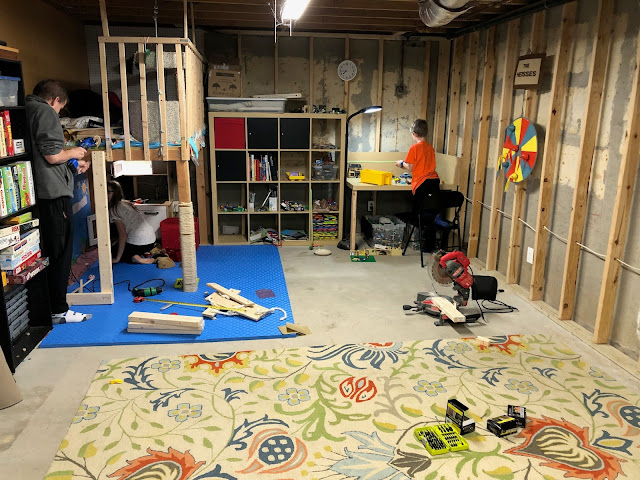 It really opened up the space and Benjamin (for one) was excited to have the table set up that way).
We also built a bit shelf (not pictured) so we could stack the boxes of trains and Lego and pull them out without unstacking everything. That tidied up the Lego room quite nicely (and the garage as well since this was all done with pieced of wood left over from other projects)!
And then since we had all the tools and everything out, Andrew decided that we should finally build a ladder into the reading loft. Neither one of us could remember why we'd put it off for so long (mostly I think it was because we were both complicating the idea of a ladder). Today we went with a simple design, similar to the ladders on the girls' bunkbeds (all of our children are in bunk beds, but the boys' bunkbed has a set of stairs rather than a ladder).
Here are Zoë and Alexander covering their ears during some wood cutting: 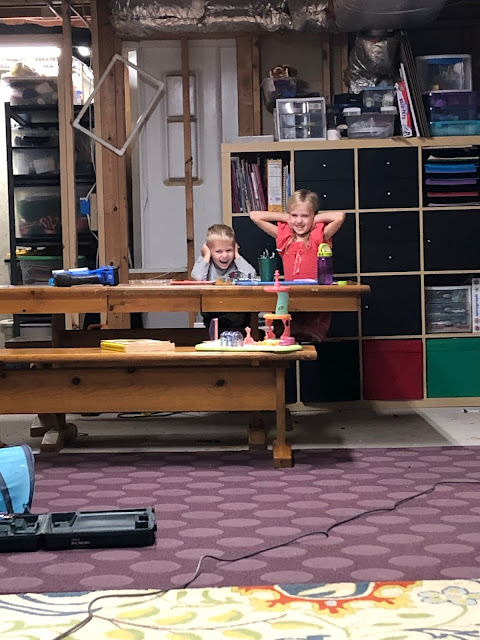 Here's Phoebe clearly not enjoying her first time being in the reading loft (she had just finished having lunch with the kids, which is why she's only in a diaper, and then she was hoping for milk and a nap, but then Miriam stuck her in this cage instead, which seemed really unfair...so I took her out and gave her some milk and a nap): 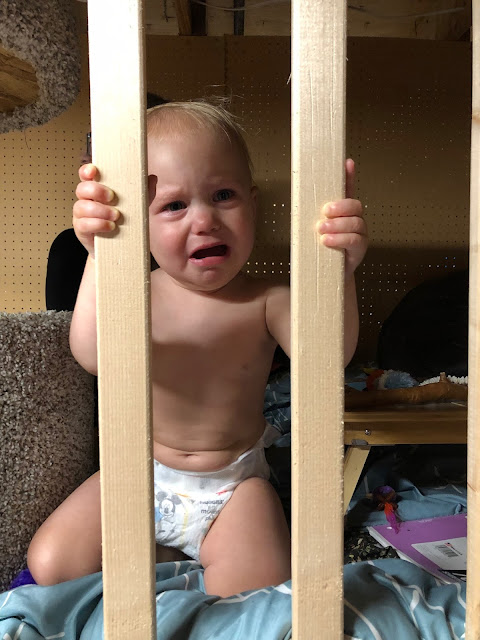 And here she is happily playing with the little kitchen underneath the reading loft after her nap: 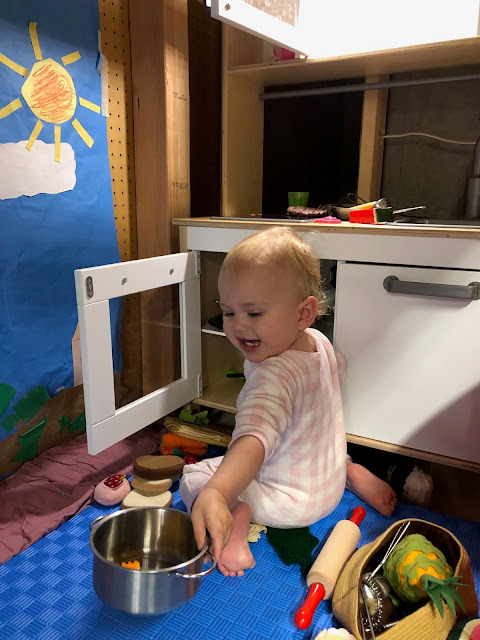 She had so much fun that she might end up spending more time down in the basement. The Lego room has been off limits to her for...basically her whole life...since it's full of all the choking hazards we didn't want her to find. So she'll definitely have to be supervised down there (but she also has to be supervised everywhere because she is a professional choking hazard finder).
Anyway, Andrew and I built a ladder today and Alexander was ecstatic about it! He was so happy to be able to get up and down from the loft all by himself. 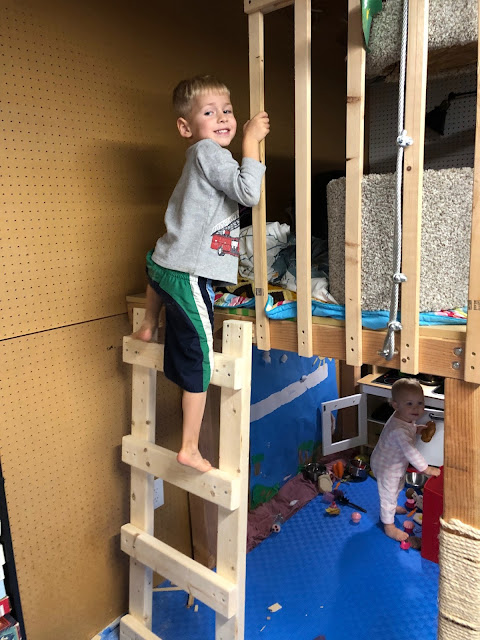 Here he is running across the room to give me a hug for building a ladder for him: 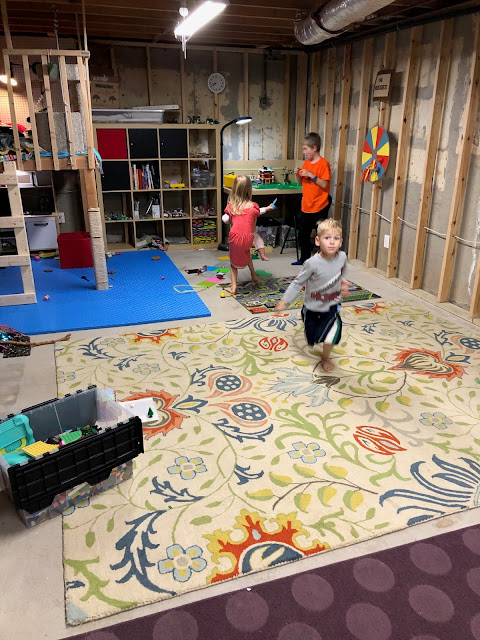 He loves it (though he told me he feels the new rug is a little too "floral" for his liking—whatever, little dude). We're all pretty happy with these changes, though I'm honestly shocked that we left the reading loft so unfinished for so many years.
I suppose I shouldn't be too surprised, however. I have not been good with time lately.
For example, I was going over my homeschool records recently and was surprised to find that we were all of a sudden so far ahead of where we were this time last year. We'd been behind last year's schedule the whole year! I could not figure out why when I felt like we hadn't taken very many breaks along the way.
"Well, we did get COVID," Andrew reminded me. "So you took time off of school then."
"That's true," I fretted. "But still we're just so far behind. Why? How?"
I just couldn't keep up with the intensity that last year's schedule called for. Then suddenly, in November (of all months) we caught right up to where we "should have been" according to last year's schedule.
"Now we're all caught up?!" I exclaimed to Andrew one evening. "How is this even possible? We didn't do anything different...? I just...wait a minute...why did we take such a long break in..."
It took me much longer than I'd care to remember that last year we'd been working at a breakneck pace the first half of the year leading up to November 13th because...I had a baby! And then took a few weeks off for recuperation (and then we also had Thanksgiving and Christmas and things like that). So the reason we managed to catch up in November was because I did not have a baby this year and thus did not require any sort of maternity leave from my homeschooling duties.
Just goes to show that I should plan out my school year more intentionally every year and not rely on whatever I did the year before being good enough.
Anyway, we're all caught up and then some by this point! The public school will have had about 90 school days by the time they let out for Christmas break (at the end of this next week). We'll have about 110 days under our belt. That's only twenty more days, which works out about right to allow us to continue having four day work weeks until the public schools get out for summer break. So not bad.
For yet another example of how bad I am with time lately, I'll admit that as I was working on our Christmas newsletter for this year I was having trouble coming up with an ending. It still feels a little abrupt, but the poem was getting long so I had to stop somewhere. Tying everything up was just...so tricky...but I finally did it!
It rhymed! And my metre was perfect!
I called Andrew in to read my poem to him. He laughed in all the right spots, until I got to the end—that tricky rhyme and metre I'd toyed with until it was perfect.
"Two-thousand and twenty-three," he said in a tone I couldn't quite pin down.
Was that...astonishment I heard? Because of my awesome rhymes, probably. No. Because of the date? 2023, I know. I can hardly believe it myself. It sounds like an impossible date. But, no. There was something else in his voice. Pity? Sympathy?
"What?" I asked.
"You said two-thousand and three," he said. "It's two-thousand and twenty-three next year."
"What?!" I gasped. "No! I mean, I know! But...what?!"
"You put 2003 in your last line instead of 2023."
"Aw, man!" I said. "This throws off my entire metre! Now I have to come up with something completely different!"
"You were only twenty years off," he said consolingly.

Anyway, time. I tell ya!

It took us three years to build a ladder (that took us an hour to build), and I can't remember what I was doing this time last year (even when that thing was "had a baby, duh") because in my mind time has accordianed so effectively that "last year" is as good as "twenty years ago."
I'm pretty sure that's a sign of getting older (but Andrew really doesn't like it when I talk about getting older, so don't tell him I said that).
Posted by Nancy at 1:52 AM