Living in Georgia has helped us to really put Reid's "vote early, vote often" maxim to use. Thanks to all the run-off elections we've found ourselves voting multiple times in any given election recently. Today was the last day for early voting so I packed all the kids up and we headed to the park so we could do our traditional "vote and play."

Here we are stopping by the "raptor" that Grandpa saw in the park the other day: 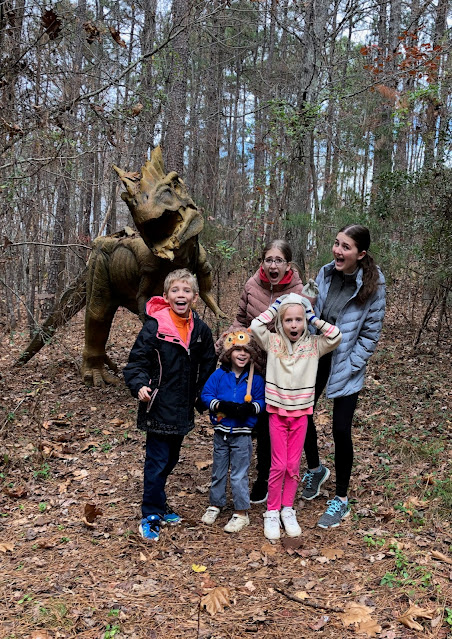 It's been here for years now and is in sad shape, but it's still fun to stumble upon.

Poor Grandpa is laid up at home with an injured arm; he slipped on some leaves while riding his bike in the park yesterday (not because he was started by this dinosaur, just because the leaves made the path wet and slippery) and mangled both body and bike (no broken bones, though, thank goodness). We sent him this picture to cheer him up.

I don't know if it worked.

And I certainly don't know how I felt about seeing this line at the community center: 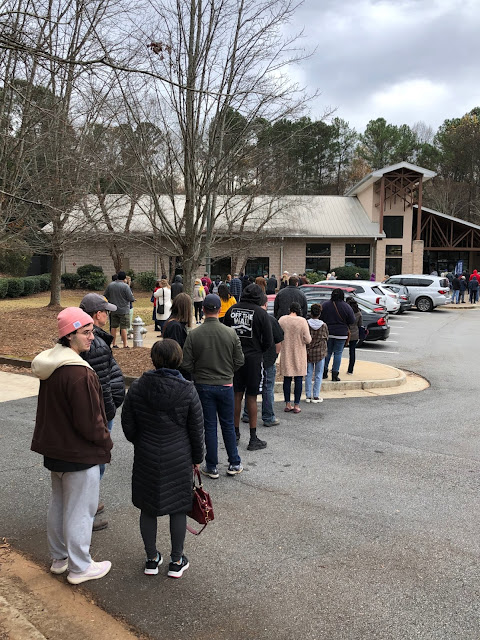 On the one hand, I was happy to see so many people out doing their civic duty. On the other hand, I kind of prefer it when I can just waltz right in, do my business, and get out of there.

Alas, today was a "stand in line for an hour" day.

I had all the kids with me, which wasn't terrible. We played "I Spy" and then just before we went inside, Rachel and Miriam took Phoebe off to return to the park, while Benjamin, Zoë, Alexander, and I donned masks to go inside (those three really wanted to see what voting was like...also, they wanted stickers).

Here they are by one of the many Christmas trees inside: 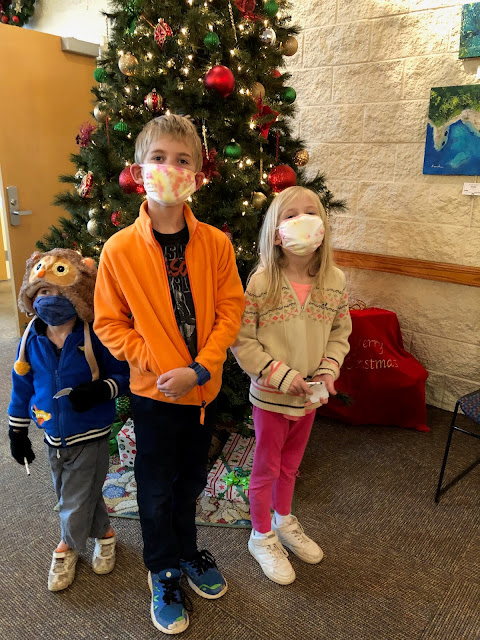 The guy who checked us in was super excited to have children come through his line. He greeted all the little "future voters" and then said enthusiastically, "And who are you going to vote for today, young man?" before catching himself and saying, "Oh! No! Wait! Don't tell me! I got carried away! I can't ask you that!"

He let each of the kids take a little touch screen pencil, which they were rather excited about.

Casting my ballot took all of 30 seconds (since we were voting for only one person), but I guess standing in line for an hour was worth it.

And we got stickers on our way out! I got an "I Voted!" sticker and the kids each got a "future voter" sticker.

"They gave me two!" Zoë gushed. 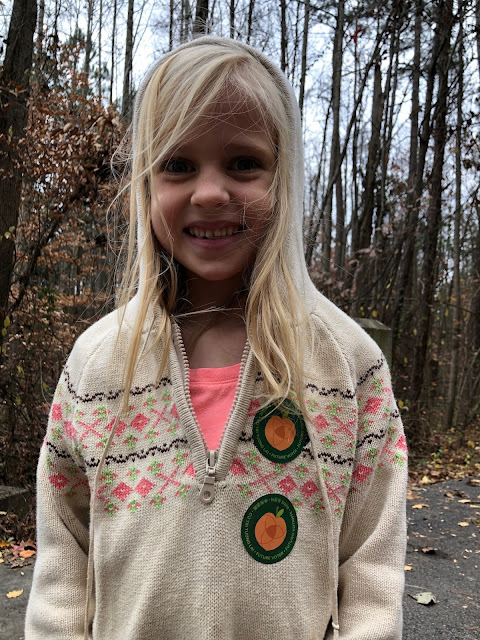 Both Alexander and Zoë admitted on our walk through the woods to meet the girls at the park that they needed to go potty. I said that was fine; there's a bathroom at the park and we could use that one.

Unfortunately, as it turns out, all that waiting in line was a little too much waiting for some of us, who ended up needing to go potty a little more urgently than we were letting on (because, honestly, if I had known he needed to go this badly I would have let him use a tree or something; this is not what they meant by a "run off" election). 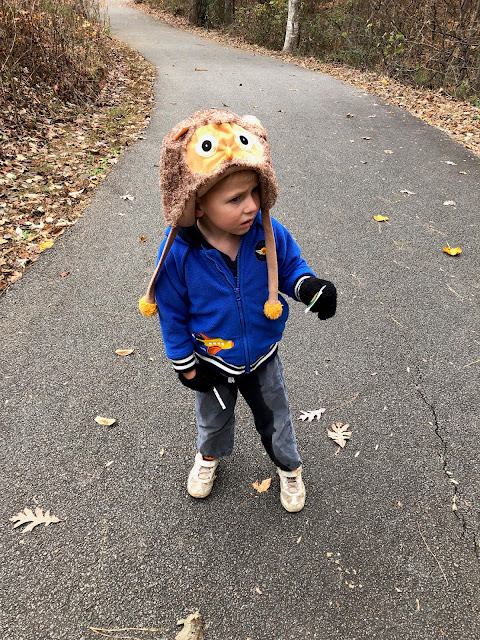 So we didn't end up staying to play at the park because, well, Alexander needed to get home to change his clothes. He was cold and wet (and a little embarrassed), but he stoically announced, "My bad, my bad. I didn't realize my body needed to go quite this badly. I just didn't realize it. But that's my bad. I will just live with this until we get home."

Like I said, we went directly home (we did not pass go or collect $200 or anything). The only stop we made was to pick up our sisters from the park (which was on our way to the car anyway).

We were pretty surprised to find Phoebe in good spirits! She had happily played the whole time while Miriam chased her around (or pushed her on the swing). Rachel just sat down and read her book, I'm told. But that's okay. I'm just happy Phoebe was kind to her sisters! 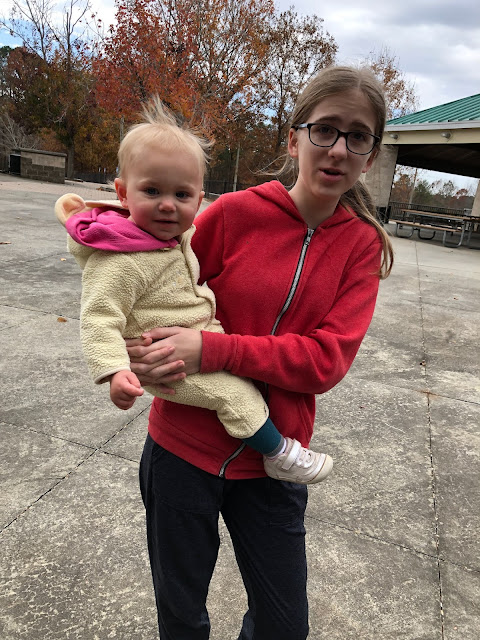 When we got home, Rachel helped me clear out the gutters while Miriam gave the younger kids piano lessons. Phoebe was excited to get in the baby carrier and fell asleep on my back while I was working (I was in charge of ladder positioning and leaf-blowing; Rachel did the actual climbing today...because I had the baby on my back). 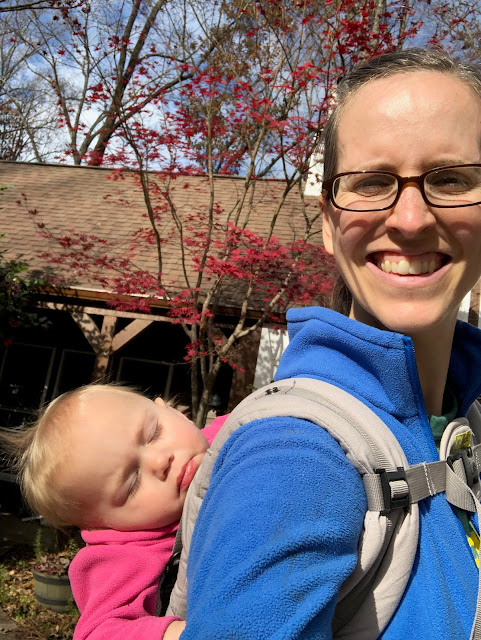 And here's one more view of her snoozing after I repositioned her head: 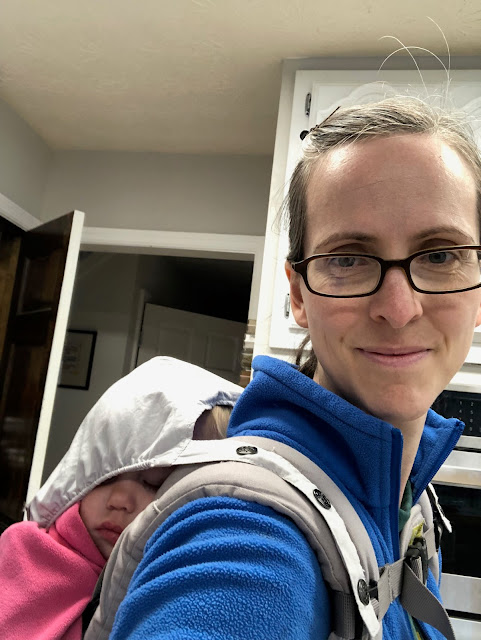 Andrew's voting right now. We'll be happy to see the end of this week. It's been a busy one!
When I was voting right around noon (at least, noon is when we reached the doors after standing in line for an hour) they had served 8900 voters. Andrew reached the doors at 4:00 and they were only up to 9500 or so, so I don't know if they're counting cumulatively during the week or if that's all in one day.
Either way, that's however many thousands of people who won't have to vote (again) on Tuesday!
Posted by Nancy at 5:11 PM