We're here to burgle your turts

When Josie was out here, Rachel, Miriam, and I watched Over the Garden Wall with her. It's a quirky little cartoon, but it has many layers to analyze...like an onion...or Dante's Inferno (which it is often compared to). It follows the whimsical journey of a pair of brothers—ages 5 and 15 (or so)—as they try to find their way home. The music is quizzically delightful. And it's just something that you watch and think, "Huh..." because it seems so simple and yet leaves you thinking long after the episode is over.

So after Auntie Josie left, the girls convinced Andrew that he needed to watch it as well. They weren't sure he would like it because...it's a little weird...but he loved it. We now own the soundtrack (so we can listen to "Miss Langtree's Lament" as many times as we want to without Alexa yelling at us about needing to buy it) and Miriam has been leaning to play "Potatoes and Molasses" on the piano.

One of our favourite lines from the show is "We're here to burgle your turts!" which I won't explain. Because you should just watch the show to find out what it means.

Just know that that line is what came to mind when we found this little turt(le) crawling by the pond.

I think these pictures of Zoë and Benjamin with their little turtle friend are darling. I'm so glad we captured this moment of the sun sinking low, casting a golden light on these sweet children bonding with this pond creature (who I'm sure was more than happy to be released again when they were through). 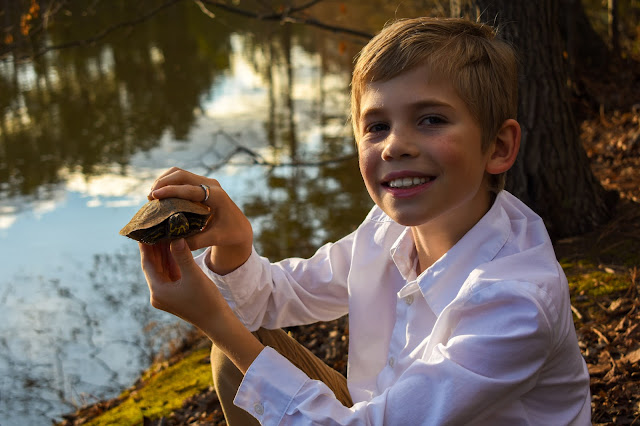 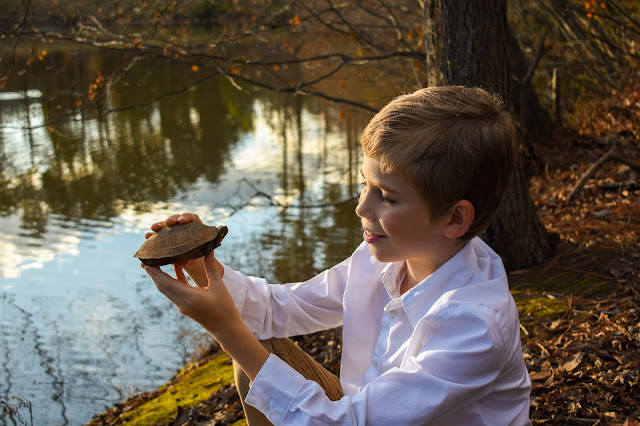 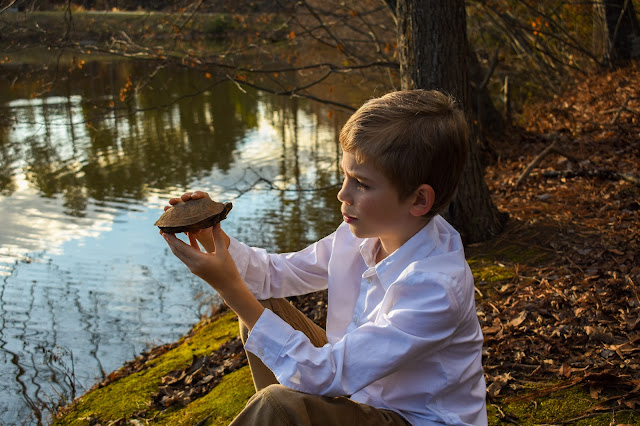 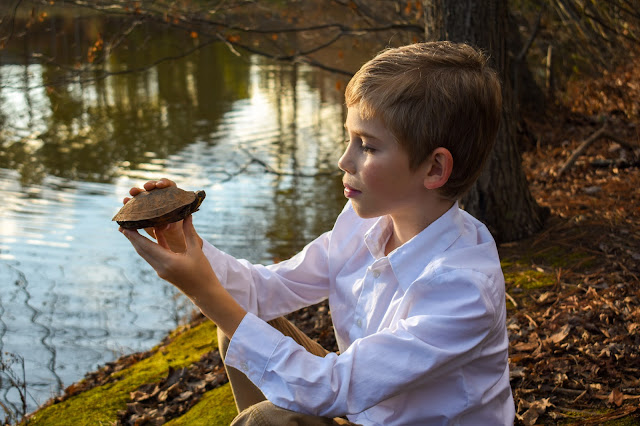 They look so serene and contemplative. 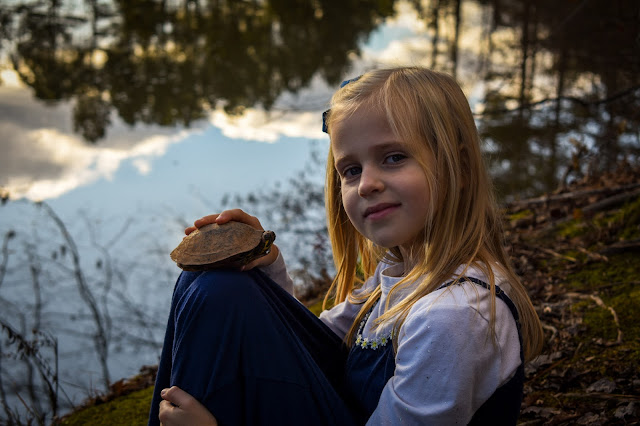 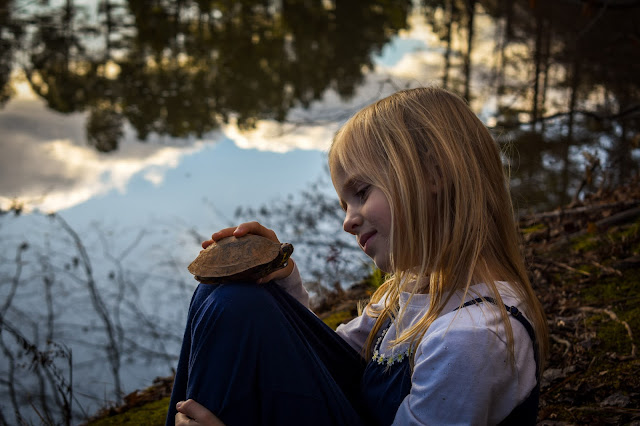 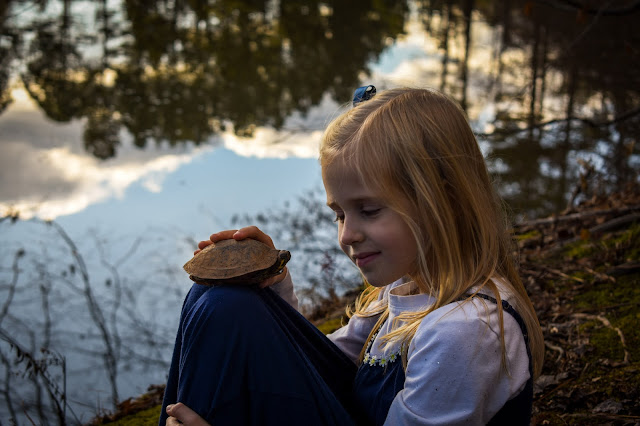 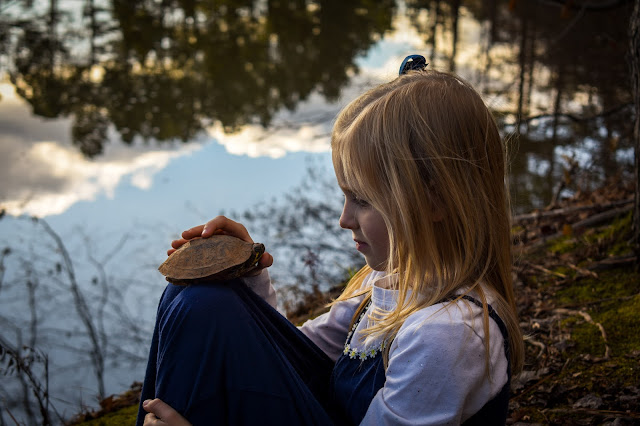 You can hardly tell they were running around chasing each other screaming about whose turn it was to hold the turtle (who had probably never moved so fast in its whole life)! 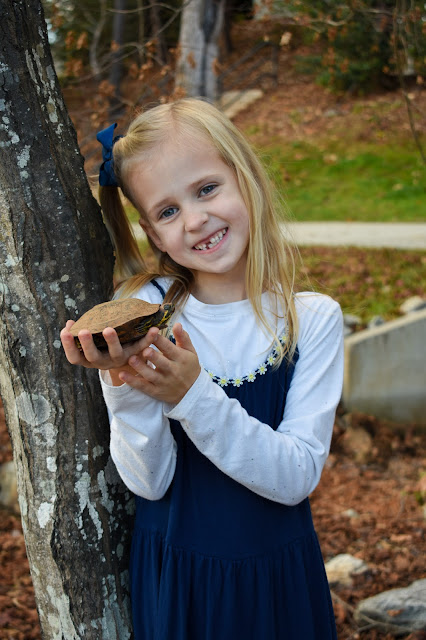 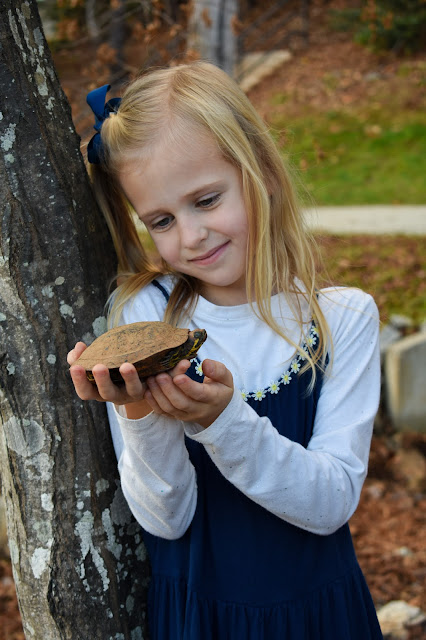 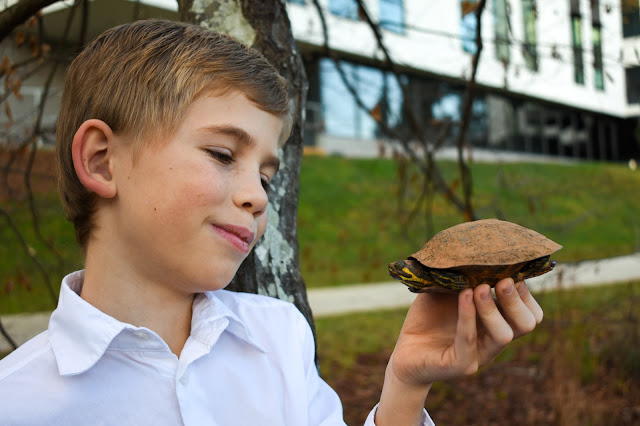 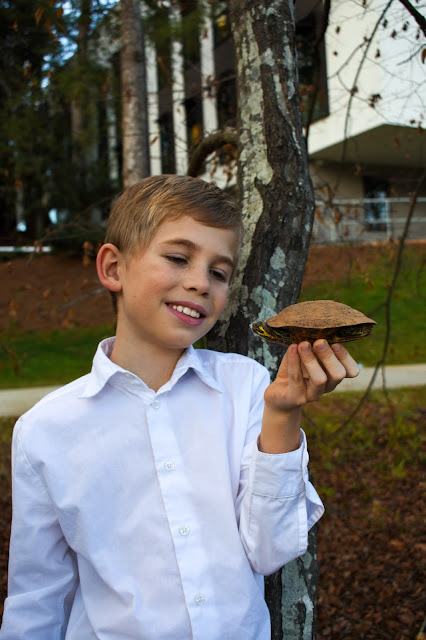 Zoë managed to pick an entire bouquet of dandelions (which still baffles my Canadian brain, even though I know that dandelions tend to be more plentiful in December than in August around here): 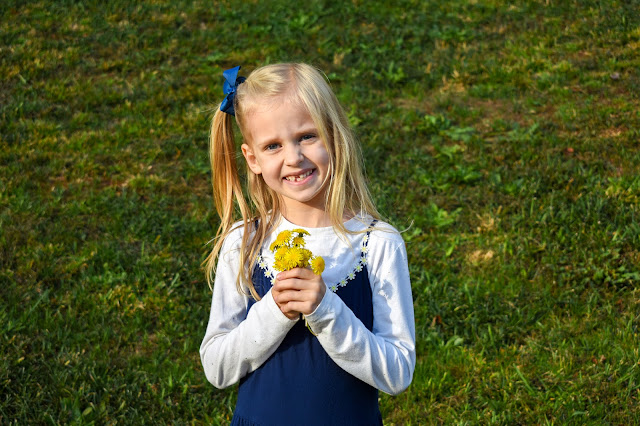 When it was her turn to burgle the turt from Benjamin, she handed her bouquet to Alexander, who happens to refer to dandelions as "snacks," which has never really been a problem before. He learned once that dandelions are edible and just...when he sees one...he wants to eat it. But I don't think he's ever had an entire fistful of dandelions since learning they were edible. 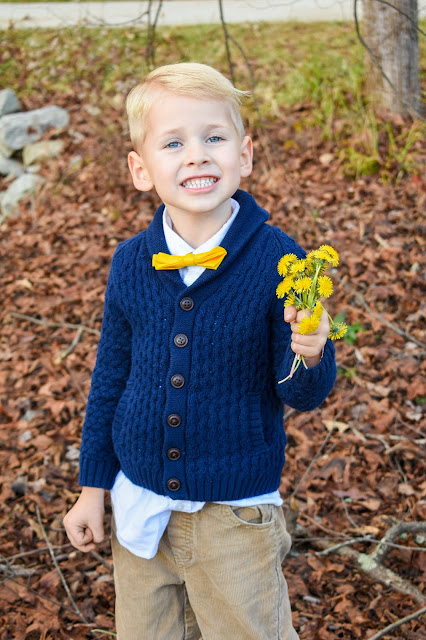 Would you believe me if I told you that he ate this entire bouquet? Because he ate the entire bouquet. I think I have a picture of the aftermath (or, at least, the midway math). 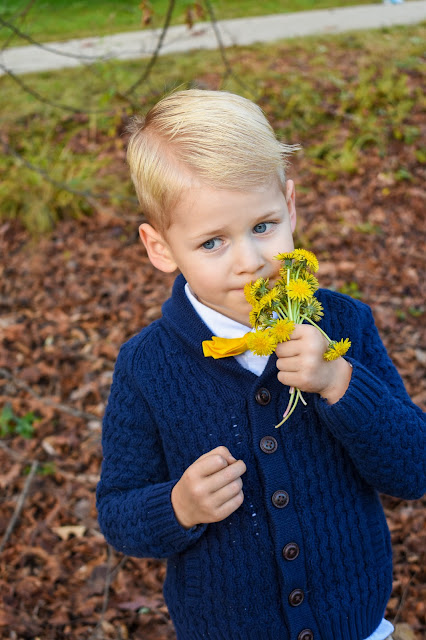 First enjoy this picture of Alexander from head to toe (with his shirt only half-tucked in): 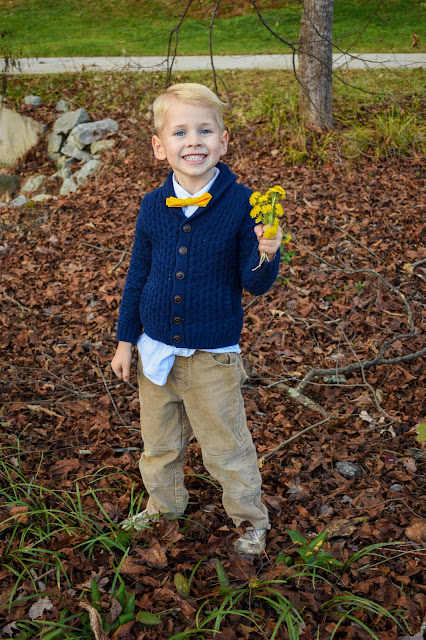 Sometimes I wonder if people can tell we're homeschooled just by looking at us. Sometimes I know they can. We're in pretty deep by now.
I'm not sure what really screams homeschool about this photoshoot to me. Is it the fact that I'm like, "Ooh, yes! Let's do take some time to play with this turtle!"
Or the fact that Benjamin said, "This turtle is likely a female because the bottom of her shell is completely flat. Because, remember? We learned that male turtles often have a concave area on the bottom of their shell so that they can balance while they...you know...mate!"
Could it be the fact that Alexander ate an entire bouquet of dandelions while enthusiastically telling everyone about the delicious dandelion milk he was slurping from the stems and how the leaves make an excellent addition to salad greens?
Or is it the fact that the boy is wearing shoes that his big sister (Zoë) wore, that her big brother (Benjamin) wore, that his big sister (Miriam) originally wore for cheer practice, lo, these many years ago? They have really been through the wringer, but I forgot to check feet on the way out the door...so...nasty old sneakers it was. (Love that for our family photos.)
Andrew insists that it gives our family photos character. We were capturing a bit of who we really are: a turtle-burgling, dandelion-eating, sketchy-sneaker-wearing family. Quite the message we're sending!
Anyway, here's Alexander  (shirt untucked on both sides now) busily sucking the dandelion milk out of the stems, now that he's consumed most of the flower petals: 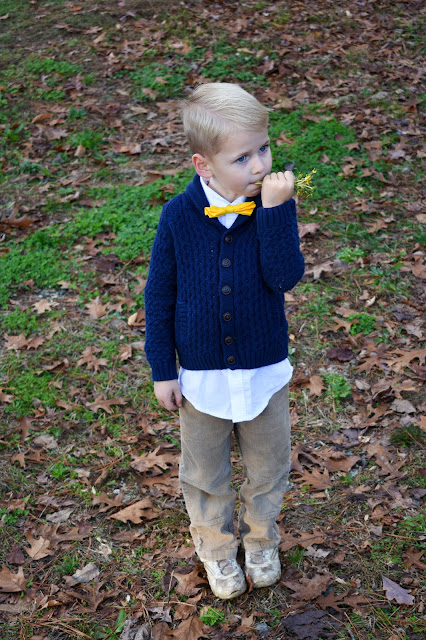 It kept him quiet (and more or less out of the mud) while we had the camera lens (more or less) trained on other children.
Posted by Nancy at 12:49 AM