So many working parts go into this newsletter, but we've fortunately reached the stage in life where we have many helping hands:

Rachel and Miriam helped me coordinate outfits for family pictures; Andrew was the cameraman and photo editor. Miriam generated marbled background papers using a program in R, and Rachel gathered all the links for the poem to make it easier for me to insert them into the final layout. All I had to do was write a poem, beg people to smile, and lay things out (you know—easy stuff).

We waited so long to take pictures—and it had been so rainy—that instead of going to a fabulous predetermined (pre-dreamed-of?) location we just...went to a random walking path a little ways from our house. I figured the paved path would prevent my kids from getting too muddy (the other location was a little more adventurous...and you remember what happened that time we decided to take family pictures at the salt flats, right? Yes, at least two of the kids ended up covered in mud from head to toe), but I was wrong. Even with a paved path for us to take advantage of more than one child became acquainted with the mud anyway.

Apparently that's just what my kids do.

But that's okay! We had good time and got some good shots!

As always, you can download our newsletter here, or read it below the jump! 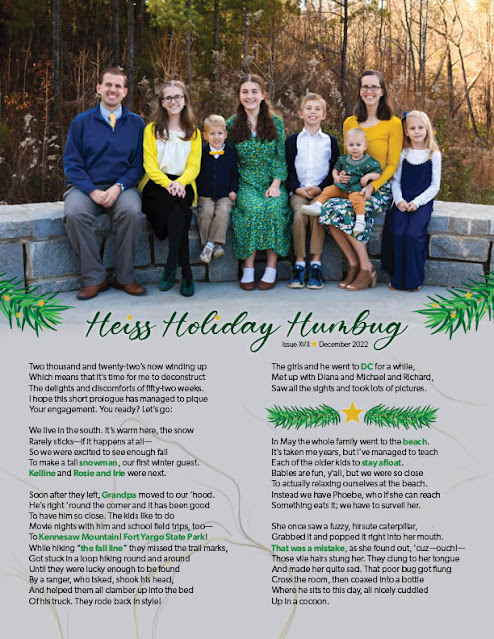 Which means that it’s time for me to deconstruct
The delights and discomforts of fifty-two weeks.

I hope this short prologue has managed to pique
Your engagement. You ready? Let’s go:

We live in the south. It’s warm here, the snow
Rarely sticks—if it happens at all—

So we were excited to see enough fall

To make a tall snowman, our first winter guest.

Kelline and Rosie and Irie were next.

Soon after they left, Grandpa moved to our ‘hood.
He’s right ‘round the corner and it has been good
To have him so close. The kids like to do
Movie nights with him and school field trips, too—

To Kennesaw Mountain! Fort Yargo State Park!
While hiking “the fall line” they missed the trail marks,
Got stuck in a loop hiking round and around
Until they were lucky enough to be found
By a ranger, who tsked, shook his head,
And helped them all clamber up into the bed
Of his truck. They rode back in style!

The girls and he went to DC for a while,

Met up with Diana and Michael and Richard,
Saw all the sights and took lots of pictures.

In May the whole family went to the beach.

It’s taken me years, but I’ve managed to teach

Each of the older kids to stay afloat.

Babies are fun, y’all, but we were so close
To actually relaxing ourselves at the beach.

Instead we have Phoebe, who if she can reach
Something eats it; we have to surveil her.

She once saw a fuzzy, hirsute caterpillar,

Grabbed it and popped it right into her mouth.
That was a mistake, as she found out, ‘cuz—ouch!—

Those vile hairs stung her. They clung to her tongue
And made her quite sad. That poor bug got flung
Cross the room, then coaxed into a bottle
Where he sits to this day, all nicely cuddled
Up in a cocoon. 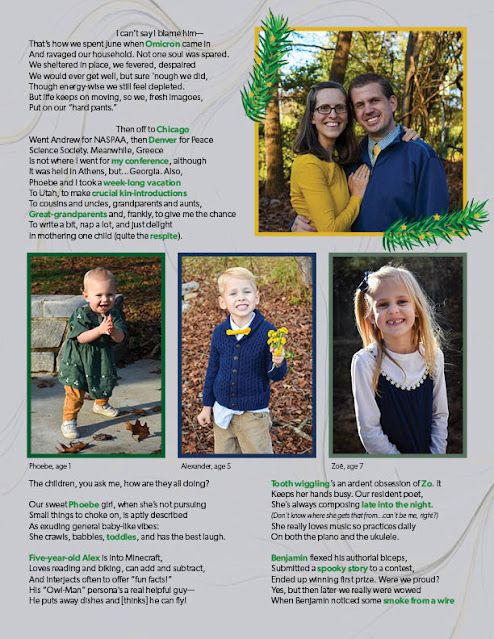 I can’t say I blame him—

That’s how we spent June when Omicron came in
And ravaged our household. Not one soul was spared.
We sheltered in place, we fevered, despaired
We would ever get well, but sure ‘nough we did,
Though energy-wise we still feel depleted.

But life keeps on moving, so we, fresh imagoes,
Put on our “hard pants.”

Then off to Chicago

Went Andrew for NASPAA, then Denver for Peace
Science Society. Meanwhile, Greece
Is not where I went for my conference, although
It was held in Athens, but…Georgia. Also,
Phoebe and I took a week-long vacation
To Utah, to make crucial kin-introductions
To cousins and uncles, grandparents and aunts,
Great-grandparents and, frankly, to give me the chance
To write a bit, nap a lot, and just delight

In mothering one child (quite the respite).

The children, you ask me, how are they all doing?

Our sweet Phoebe girl, when she’s not pursuing
Small things to choke on, is aptly described

As exuding general baby-like vibes:
She crawls, babbles, toddles, and has the best laugh.

Five-year-old Alex is into Minecraft,

Loves reading and biking, can add and subtract,
And interjects often to offer “fun facts!”

His “Owl-Man” persona’s a real helpful guy—
He puts away dishes and [thinks] he can fly!

Tooth wiggling’s an ardent obsession of Zo. It
Keeps her hands busy. Our resident poet,

She’s always composing late into the night.
(Don’t know where she gets that from…can’t be me, right?)
She really loves music so practices daily
On both the piano and the ukulele.

Benjamin flexed his authorial biceps,
Submitted a spooky story to a contest,

Ended up winning first prize. Were we proud?
Yes, but then later we really were wowed

When Benjamin noticed some smoke from a wire 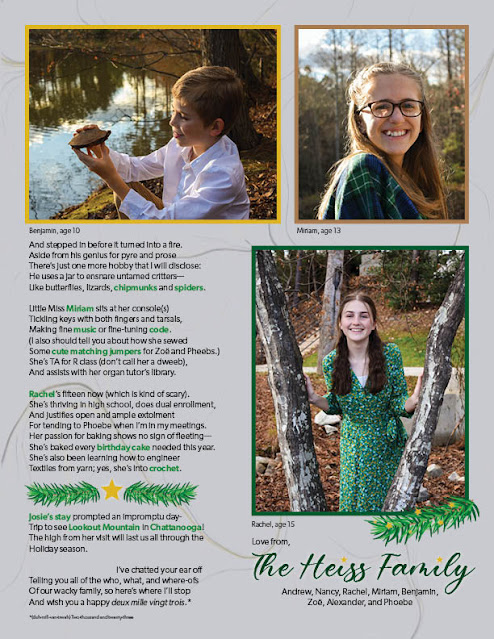 And stepped in before it turned into a fire.
Aside from his genius for pyre and prose
There’s just one more hobby that I will disclose:
He uses a jar to ensnare untamed critters—

Tickling keys with both fingers and tarsals,

Making fine music or fine-tuning code.
(I also should tell you about how she sewed
Some cute matching jumpers for Zoë and Pheebs.)
She’s TA for R class (don’t call her a dweeb),

And assists with her organ tutor’s library.

Rachel’s fifteen now (which is kind of scary).
She’s thriving in high school, does dual enrollment,
And justifies open and ample extolment
For tending to Phoebe when I’m in my meetings.
Her passion for baking shows no sign of fleeting—
She’s baked every birthday cake needed this year.
She’s also been learning how to engineer
Textiles from yarn; yes, she’s into crochet.

The high from her visit will last us all through the

I’ve chatted your ear off

Telling you all of the who, what, and where-ofs
Of our wacky family, so here’s where I’ll stop
And wish you a happy deux mille vingt trois.*