I'm just slow about writing about it because...thesis. But that's okay!

We'd planned to have dinner around 3:00 in the afternoon. Josie, Rachel, and Miriam played games at Grandpa's house all morning and cooked the turkey breasts (which no one ate very much of, though the kids seemed to love after I turned it into turkey à la king last week for one of our leftover nights). The little kids and I spent the morning raking leaves. Andrew spent the morning bustling about the kitchen.

Here's how our spread ended up: 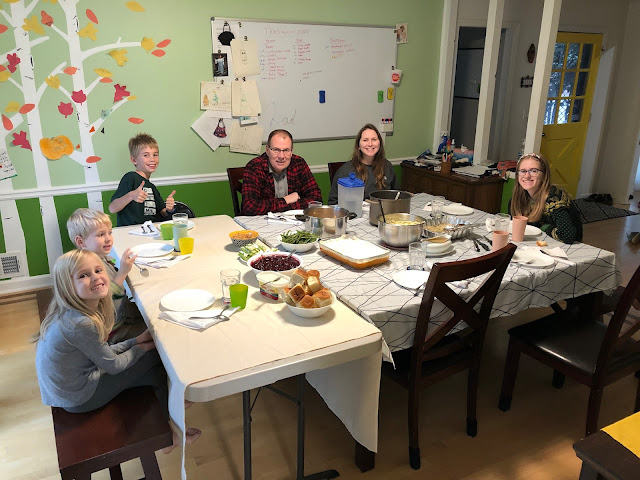 We pulled up an extra table because my kids felt having to sit three kids to a bench was a hardship.

I tried taking some panoramic photos of the table and everybody around it:

They're hard because everybody has to stay so still and I have to keep the camera level, but you can see that we had good food (Miriam's cranberry sauce, carrots, green beans, sweet potatoes with marshmallow (very popular), stuffing, cornbread stuffing, mashed potatoes, gravy, and turkey breast) and good company (L to R: Zoë, Alexander, Benjamin, Grandpa, Auntie Josie, Rachel, Miriam, Andrew, and Phoebe). 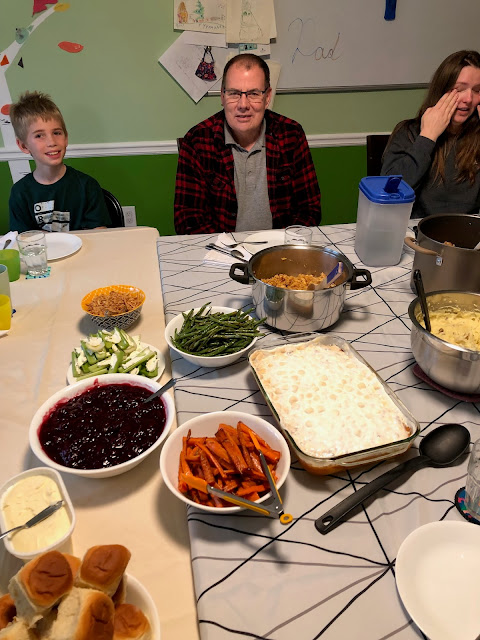 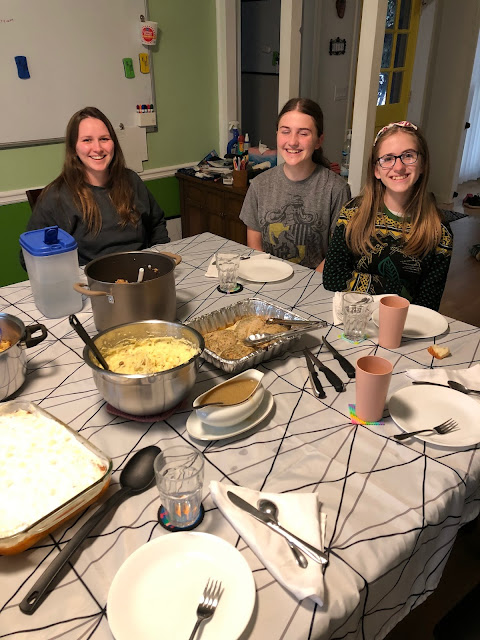 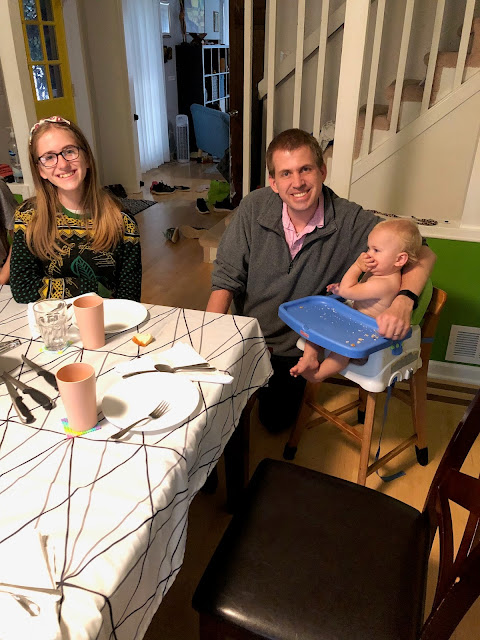 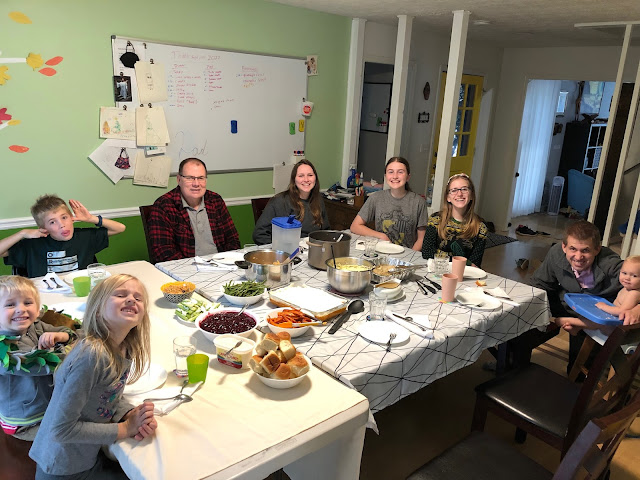 After dinner we went on a Hobbit Walk (there and back again) to make some room for pie...and because our neighbours put up an inflatable Christmas Grogu (and we know how Phoebe feels about Baby Yoda). She was so excited to see him! 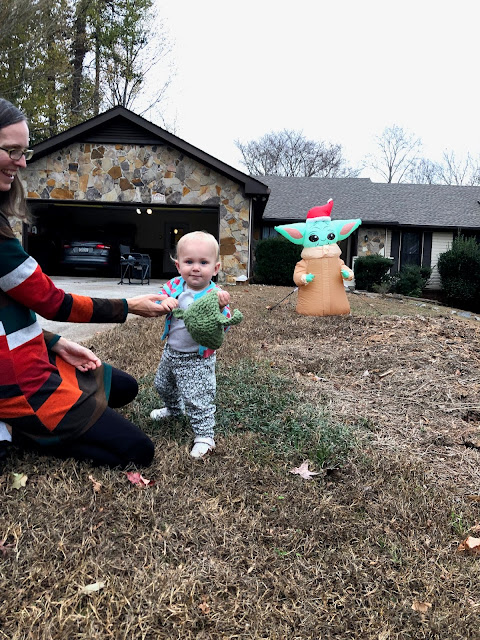 Here's Andrew burdened with children on the way back to the house: 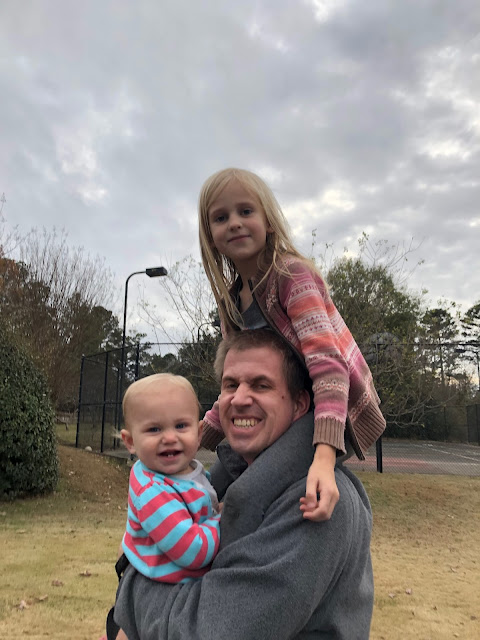 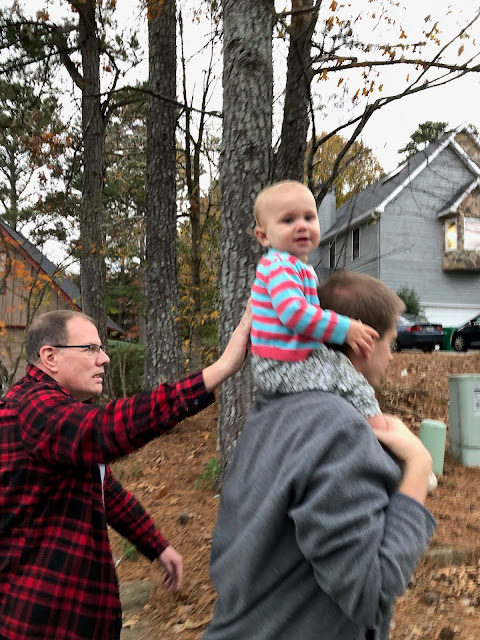 Here's Phoebe pointing as we walked past Grogu again: 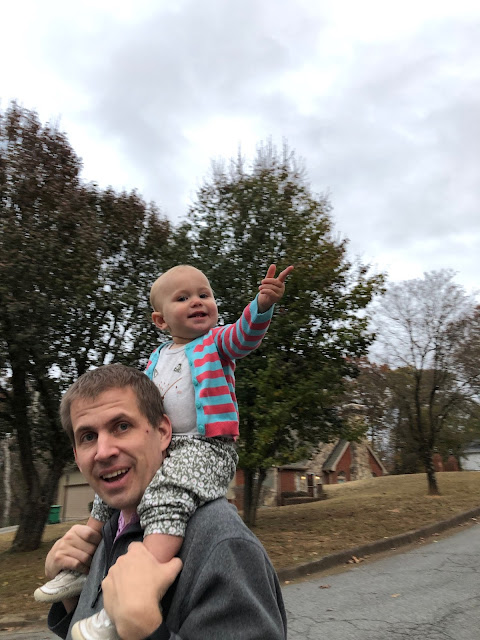 Once back home we pulled out our yard games and played for a while longer since no one felt quite ready for pie yet. 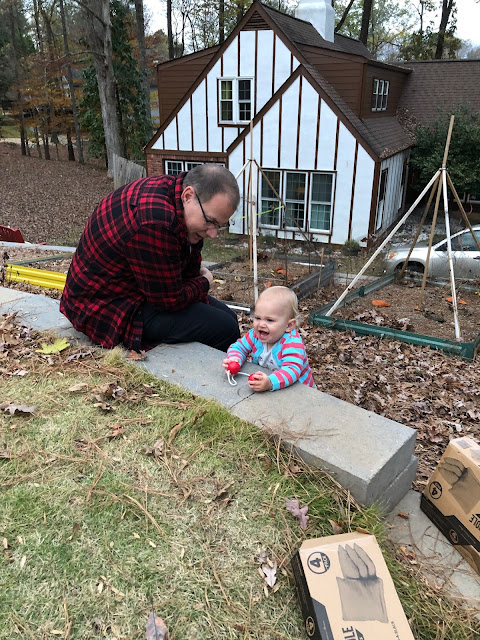 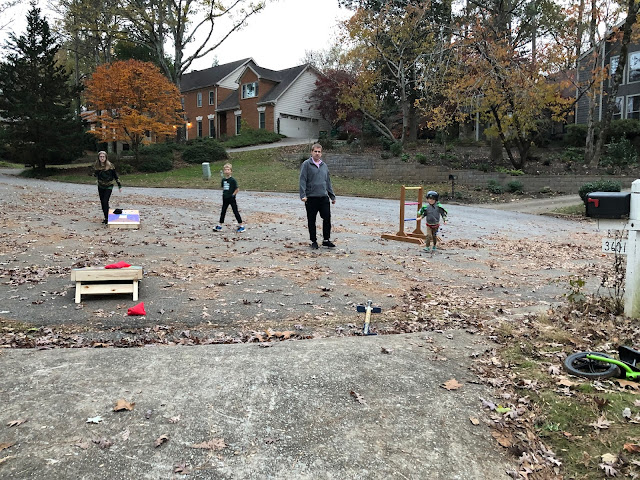 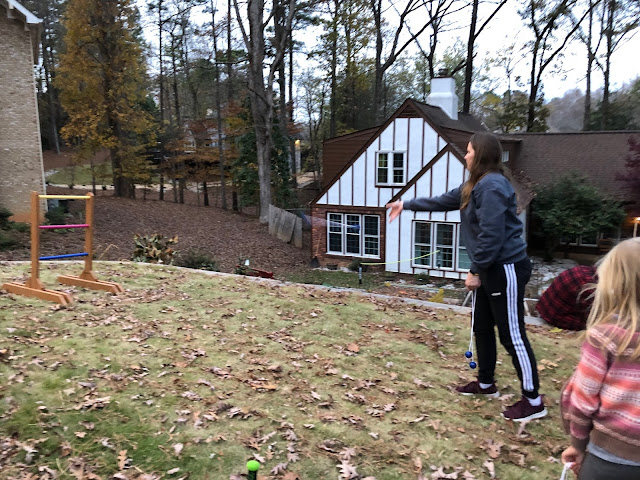 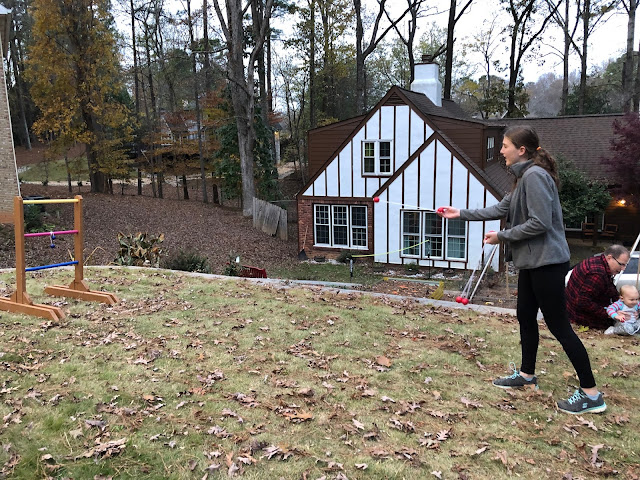 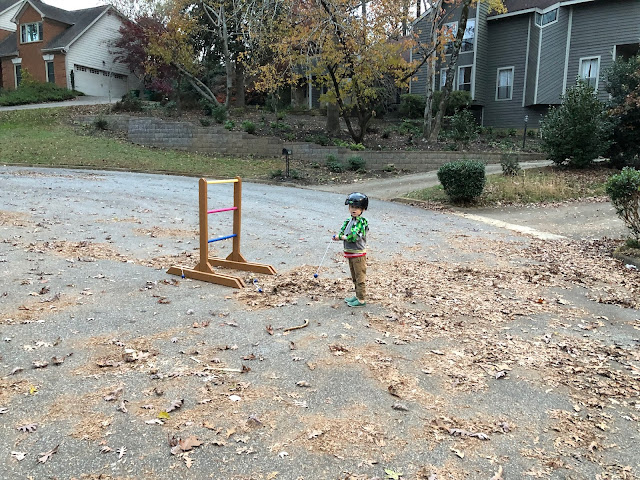 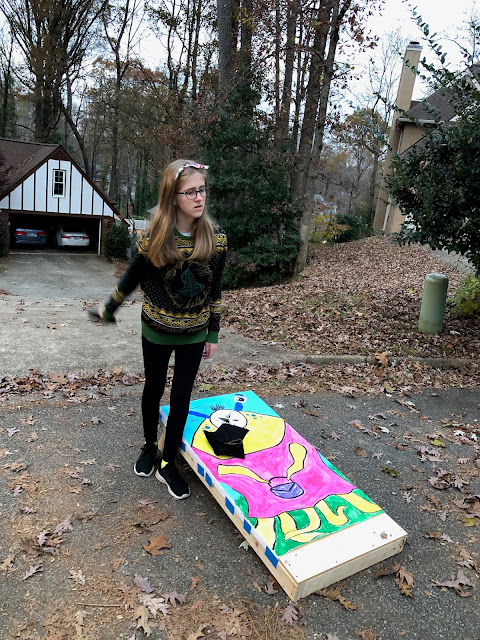 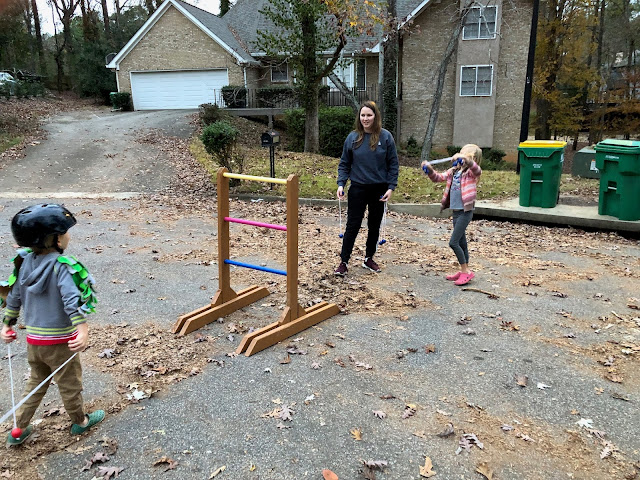 Zoë eventually gave up on yard games and pulled out her ukulele, sat on the driveway, and serenaded everyone with her music. She's getting pretty good at switching between chords and bravely figures out new chords now! 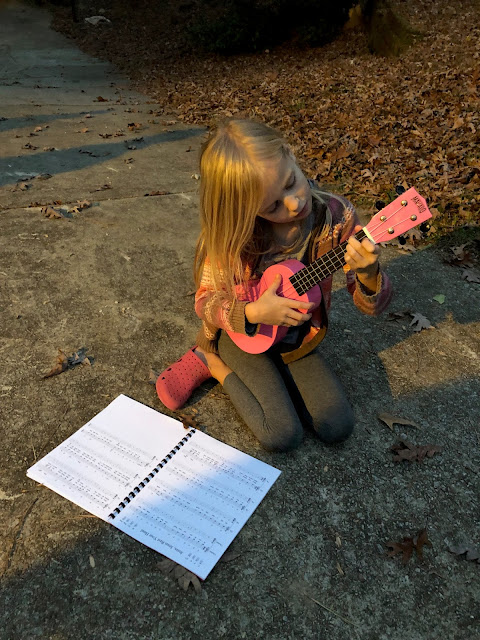 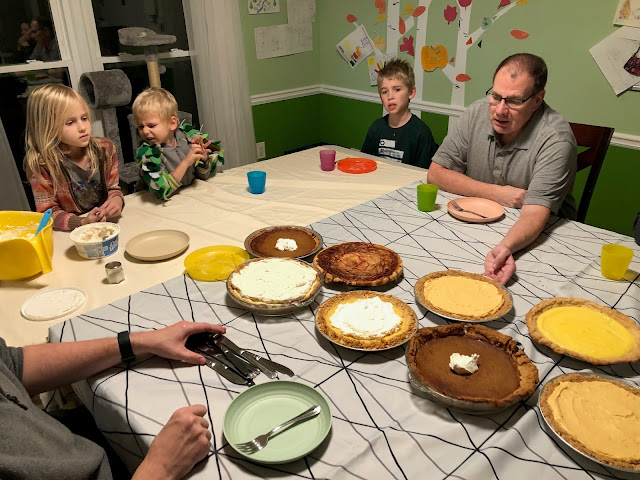 Those guys had quite the time making pies the day before Thanksgiving. The pie crust kept misbehaving, so none of the pies turned out looking particularly scrumptious (at least by the looks of the crust), but they tasted just fine! Josie's apple pie, though, was so wet! We're not even sure why because we've made apple pie several times before. We put a cookie sheet under her pie when we put it in the oven because we could already tell it was...wet...and as it baked juices kept streaming out of that pie. Just about filled the cookie sheet! 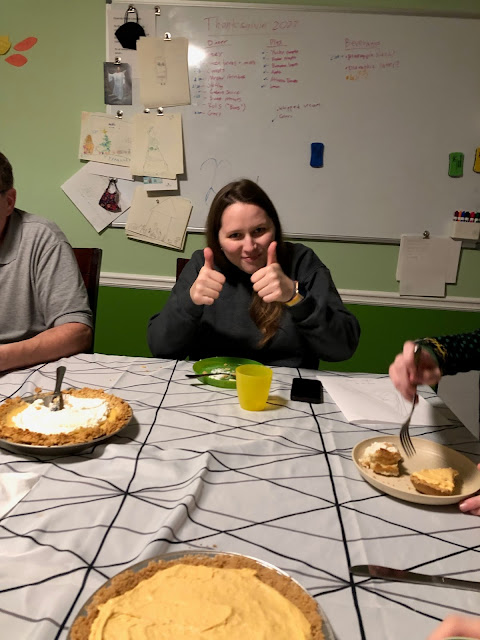 But the pie turned out beautiful, with a hundred little layers of apple and plenty of spice in between: 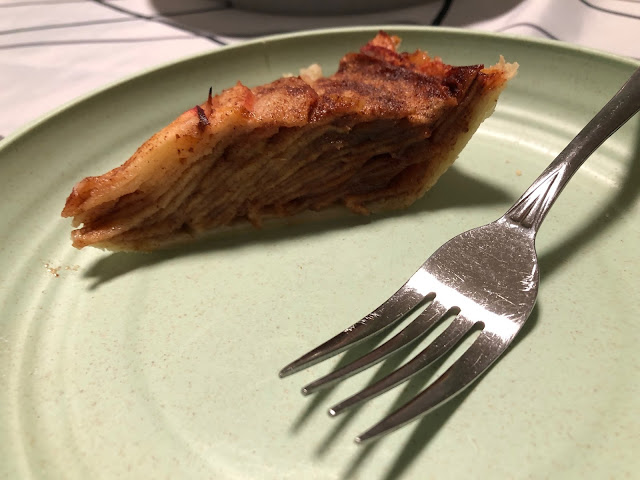 And we salvaged all the dripage and turned it into a syrup for pumpkin spice lattes. At least, I think that's what we did with it. At any rate, we had pumpkin spice lattes with our pie the day after thanksgiving (latte in this case meaning "plain milk" (a coffee-free latte)). I actually like this beverage quite a lot, which was surprising to me because I don't particularly enjoy milk or egg nog or anything like that. But, these pumpkin spice lattes are quite lovely!
We also had "Heiss Ice" with dinner! I almost forgot!
Andrew and Rachel wrote a list of everything we needed to bake on the whiteboard so we could check things off as we accomplished them. I noticed that we hadn't planned any beverages, so I made a column for that on the board and wrote:
And underneath that one of my children scrawled:
So Andrew made sure to get ingredients for both when he was out shopping for Thanksgiving and upon his return proudly walked into the house carrying two fresh pineapples.
"What's the recipe for this pineapple slush stuff?" he asked.
"You got fresh pineapple?!" I asked. "And two of them?!"
"For the pineapple slush..." he said, his enthusiasm draining (I have that effect on people sometimes).
"We don't need fresh pineapple," I said. "We need crushed pineapple."
"What else do we need, then?"
"How should I know?"

"You're the one who wrote it on the board."
"But it's your family recipe!"
"What?"
"I figured you just knew what to get for it."
"I figured you just wanted pineapple...."
"No! I thought we should have that pineapple slush stuff your mom always made for things. You know—she makes it the night before, freezes it, and then puts it in a punch bowl with Sprite..."

"Oh, that!" Andrew said, memories flooding his brain. Finally. "What's the recipe?"
"I don't know!" I said. "Ask your mom!"
"That was low," Rachel chided.
"Consult her recipe book," I clarified.
"Oh," said Rachel and Andrew together.
So Andrew went to his computer to look up the recipe (his mom once sent a PDF of a ward recipe book she made years ago that contains many of her important recipes, this one included).
When Reid came over I started to tell this funny story about how Andrew didn't know what "pineapple slush" was (we hadn't yet remembered the name "Heiss Ice," though in retrospect that should have been obvious) and he was also clueless.
"So, you know pineapple slush..." I said. "Andrew bought fresh pineapple for it!"
"Pineapple...slush...?"
"That drink that Karen used to always make, with the crushed pineapple...and you freeze it and then put it into Sprite..."
"I do not recall such a drink."
"Surely you do! Karen made it for so many things! She'd freeze it in Cool Whip containers and..."
It took a while, but eventually Reid blurted out, "Oh, Heiss Ice!"
And on Thanksgiving we all drank it up like it was made of memories itself.
Here's the recipe, in case you're curious:
Banana/Pineapple Slush*
6 c. water
4 c. sugar
12 oz. frozen orange juice
½ c. lemon juice
1 large can crushed pineapple
5 mashed ripe bananas
Boil water and sugar. Add everything else. Freeze in containers. Serve with 7-Up, Sprite, or ginger ale.
*This is how Karen titled it in her recipe book, so for me to call it "Pineapple Slush" rather than "Heiss Ice" shouldn't have necessarily been a huge point of confusion. 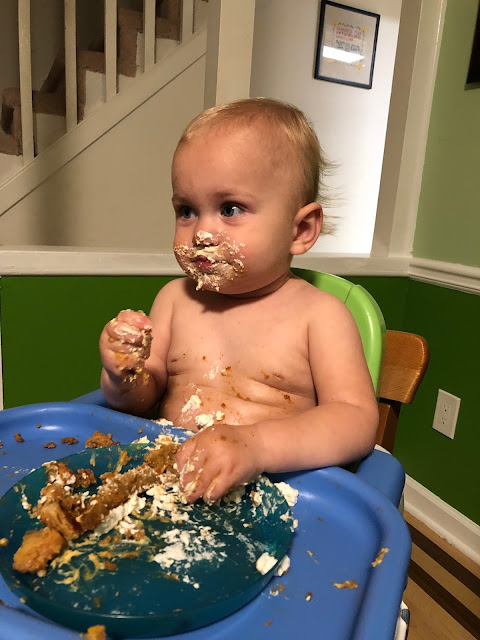 I've told the story of Yucky Pumpkin Pie before, which seems like an important thing to point out. I should probably include the recipe here as well (so my children can easily find it one day), but today is not that day. Here is Phoebe enjoying a lot of regular pumpkin pie, which looks pretty yucky. She thought it was yummy though! 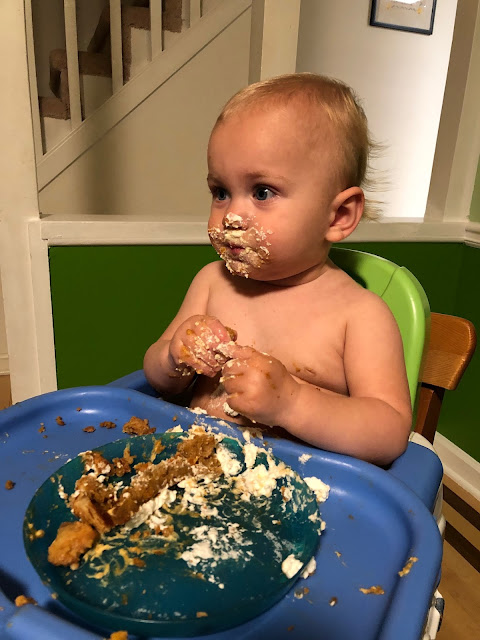 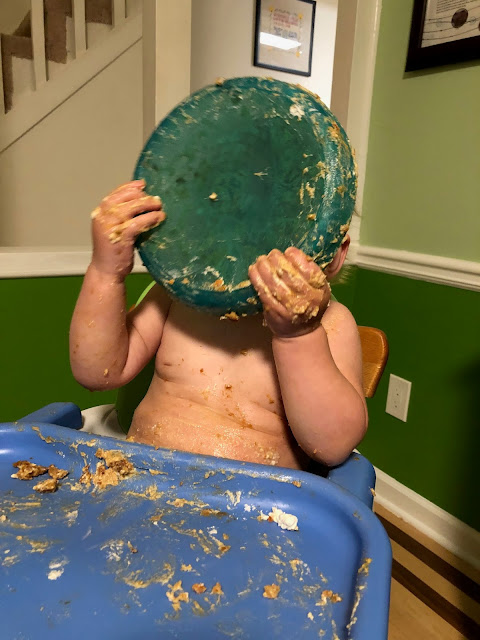 Editing to add the Yucky Pumpkin Pie recipe because Andrew just sent it to me: 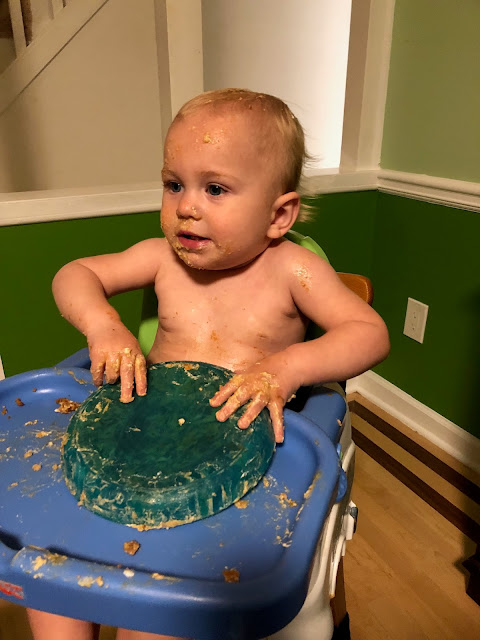 I can't remember what this cute face was for. We were probably teasing him about something. 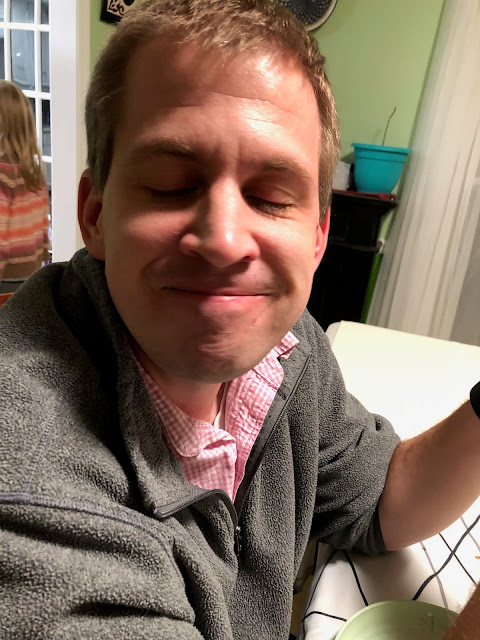 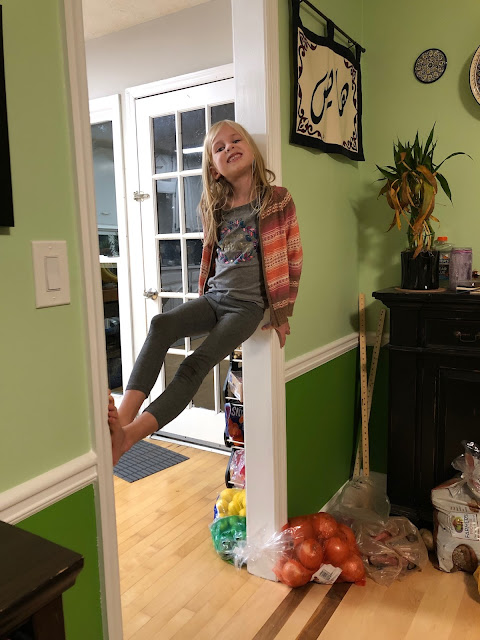 And, finally, here are Zoë and Alexander ready for bed: 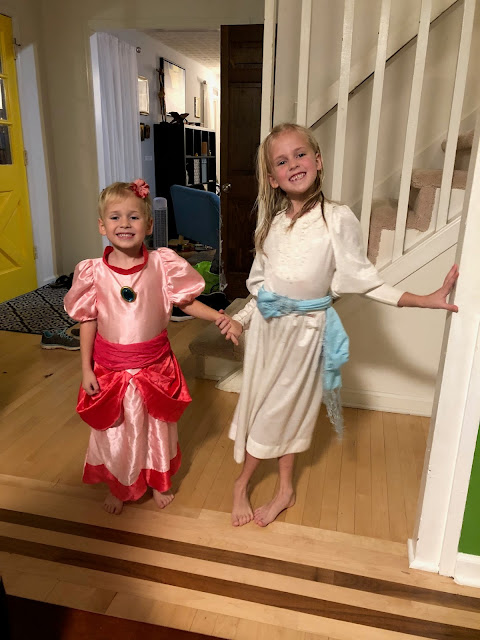 We sent them upstairs to put on pyjamas and brush their teeth, and this is how they reemerged. While we played some big-people games (Spoons and Animal), these two drew pictures together. Here they are working on the same piece of art—they've divided the paper in half and are drawing symmetrical worlds on either side of the paper, Zoë drawing the nighttime version and Alexander drawing the daytime version: 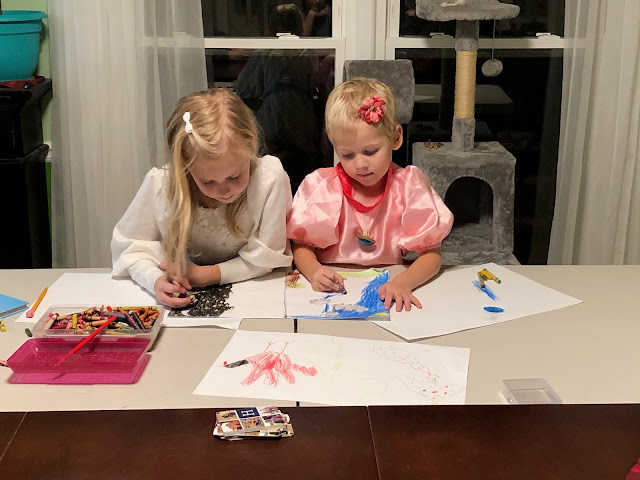