al Hafla (or, the pickle incident)

On Saturday night, we celebrated the end of the semester with Andrew's 101 Arabic class by holding a little hafla at our house. We made kosheri, foul, and falafel while Andrew's class brought vegetables, drinks (mostly orange pop), humus, and pita. We had a pretty good turn out although I was worried at first because only 2 people were there for the first 20 minutes or so.

But they all filed in slowly, which, according to Andrew, is pretty normal for class also.

In the hubbub of getting everything ready to eat, I had forgotten that pickles are essential to any Middle Eastern meal: breakfast, lunch, or dinner. I asked Andrew if he wouldn't mind getting the pickles from the fridge. He complied, whipped open the fridge and grabbed the pickle jar.

Now, a typical female would have taken the jar to the counter, taken out a little dish, and put a few pickles into the dish. Andrew is not a typical female. In fact, he is probably more along the lines of a typical male. He took the whole jar of pickles out of the kitchen with the intent of putting it on the table.

In the hallway he had a little detour. The pickle jar slipped out of his hands and landed, lid-side down, on the floor. Luckily, the lid had only partially screwed off so although a substantial amount of pickle juice spilled all over the floor, we lost no pickle in the accident. I suppose we were pretty lucky that the jar didn't shatter....

I quickly started mopping up the pickle juice with a paper towel. While I was down on the floor, Andrew picked up the jar, set it on the table, and grabbed more paper towels to help me clean up.

One of his students mocked us, "Oh, I remember when my wife and I used to do everything together..."

Really, what was Andrew going to do? Make me clean up by myself? Rude!

Anyway, after eating (and while some of us were eating), we crowded into the living room to watch "West Bank Story," which was hilarious again. The party died out fairly rapidly since some had to work, and others had to write papers...

A few did stick around though...showing their peers their telephone book ripping skills. 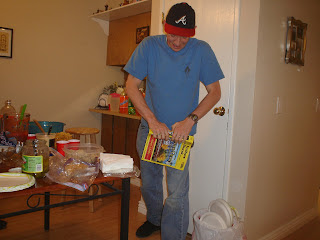 That kind of died out quickly, too, though, and soon Andrew and I were left with a rather messy kitchen, but a quiet house. Wow, a party that ended at 8 pm! What could get better? We had a good time and still got to bed at a decent hour (although the kitchen is still relatively in shambles).
Posted by Nancy at 10:15 PM