Whichever way it went, I loved being the baby. I think I slept in the crib longer than my little brother, and he's 4 years younger than me. I know that I slept with my parents longer--I remember my mom talking about it with some other moms on my first day of school. I remember insisting on a bottle, even when I was 4.

Right around when I was 4 and 5, my mom started taking these things away from me. I didn't really like it because, not only had I been replaced as the baby, I was replaced with a boy! Come on, a boy? Like that's even a good replacement... I considered myself much more enjoyable as a baby than a boy.

The first year Patrick came along, I did have to give up the bottle and started sleeping in my own bed (although would use the crib whenever I saw an open opportunity). It took awhile longer to get me out of my parents' bed...

The biggest boon though, was my favorite blankey. I am not sure which grandma gave it to our family because it isn't recorded in my baby book. It was actually given to my older brother, who then relinquished it to me when I was born. Since that day, I have been very reluctant to give it up.

The green side is soft and silky and I liked to rub it in my fingers. The pink side isn't as soft or silky, but it was pink. And pink is good. 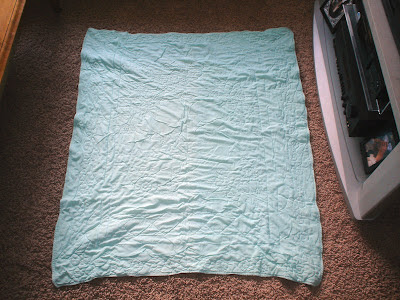 I took this blanket with me everywhere. My mom tried to get me to stop taking it to church, but I knew that her slip felt very similar to my blanket, so every time she took my blankey away, my hand would go down her top or up her skirt so that I could rub the silky material. She ended up letting me take the blanket with me everywhere I went until I got embarrassed about carrying it around in front of my friends (which did eventually happen).

Even though I was weened from my blanket in public, I was still very much attached to it in private. Putting me to bed was usually pretty easy. As long as I had my blankey, I was good to go. If I didn't have my blankey though, there were problems resulting in high-pitched screams, which, in turn, usually resulted in the whole household hunting for my blanket so that I could go to bed.

Although I got over this need to have my blanket with me, it still was on my bed until the day that I got married and Andrew took it away from me, called it "nappy," and put it in the closet. How's that for tough love?

Now that we're having a baby, he let me get it out again, but only to put it in the baby's room. He said that I can't use it anymore.

I guess I will finally have to go from being babied to being the babier.

Andrew's harsh actions against my blankey probably stem his own experience with his favorite blankies. Andrew had, not one, but two favorite blankies, and it sounds that he may have been a little more attached to them than I was to my own blankey. His blankies' names, yes, their names, were Dan and Howsey. (I didn't ever name my blanket. It was, after all, just a blanket). Andrew was also very attached to his blankies and took them with him everywhere. I believe that Andrew has made his family turn around on a long trip, just to retrieve a forgotten blanket and I think he even had to have his blankets mailed to him once. I could have the story wrong though.

To punish him, Andrew's dad would take the blankets and put them up high on a door, so that Andrew could see them but not reach them. I would have gone ballistic as a child if this had ever happened to my blankey. Andrew also would react in a very unpleasant manner, which I'm sure his dad thought was very funny.

Alas, Andrew's blankies are no where to be found now. I think his mom made them into a pillow when they started to get too "nappy" to carry around, and Andrew lost that. And now he's taking all his anger out on the wonderful bonds my blanket and I share.

Anyway, the point of this post is that I just completed a baby blanket for our baby. 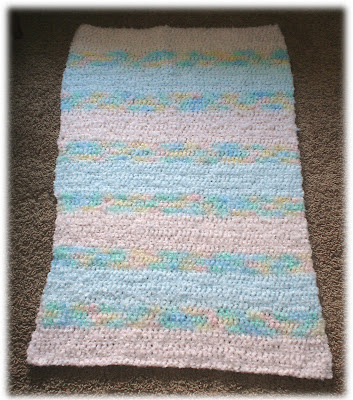 It took me a week and 4 and a half skeins of yarn to finish. Andrew still wants me to put a border around the edge of it. The only problem with that is that I don't actually know how to crochet, so I'm not sure how to make a border. I can crochet anything that is rectangular in shape: scarves, blankets, dish cloths, etc. But the minute you start branching out into hats, sweaters, or borders around blankets, I have to put down my crochet hook and leave it to someone who knows more stitches than a single, double, and triple.

Anyway, this blanket is so soft that Andrew reminded me, while I was making it, that it was for the baby, and not for me. I told him that I would have no problems there because the only thing better than holding a baby is holding a baby wrapped up in a soft blanket.

I finished the blanket last night, and my poor blankey-starved husband asked me to cover his cold feet with it...because it was so soft. It looks like he, too, may need a reminder about who the blanket is for...
Posted by Nancy at 1:02 PM