Patrick has this cool t-shirt that says, "I'll Timp YOUR Nogos!" I happen to find it really funny. In case anyone is left in the dark, some of us went and some of us are going to Timpanogos High School. It's in the shadow of Mt. Timpanogos, which also happens to be the name of the temple Andrew and I were married in.

Anyway, Patrick had a volleyball game this evening. Josie came to hang out with me because she didn't have mutal tonight so we were planning on going to Patrick's volleyball game together. We would have to leave my house with enough time to walk to Mountain View High School in order to watch the game since Andrew has the car. The only problem: we had no idea what time his game was at.

At 6:55 I phoned him. He was supposed to have phoned mom or me to let us know when the game was, but for all we knew he hadn't.

"Hey!" I begin cheerily, "What time is your game?"

"Oh, well, I still have to make dinner and stuff, so I don't know if we'll be able to make it in time. We have to walk, you know..." (I'm only slightly annoyed here).

"So, why didn't you tell us when your game was earlier?"

"Why didn't you leave a message?" (I'm a little more annoyed here).

Point taken. He doesn't do messages, apparently. He's probably too street for that, or something.

Lucky for us he also had a game at 9:00 so we had time to eat dinner, walk over to the High School, and watch his game.

I'm glad that I went. He made some awesome hits! 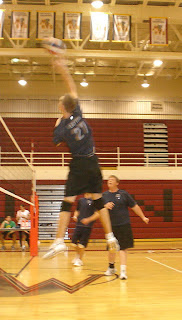 Unlike me, Patrick is actually good at volleyball. That's probably why he's on both the high school team and UVSC's team. He's good. He's not afraid to get right up close to the net (I am), he's not afraid to absolutely whack the ball (I am), and he can jump (I can't).

Thus we see that my friends who took me out to play volleyball every Thursday night awhile back (the semester before Andrew got home from his mission) really were just taking me for friendship, not because they thought I could play. How nice.

Getting some net action 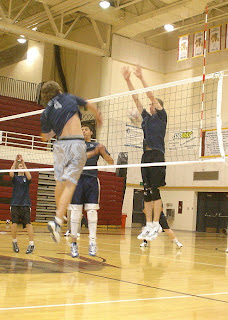 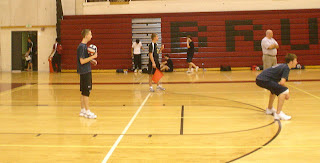 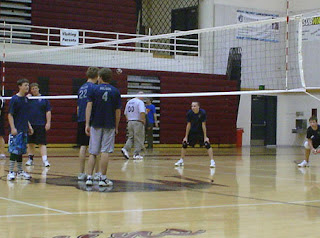 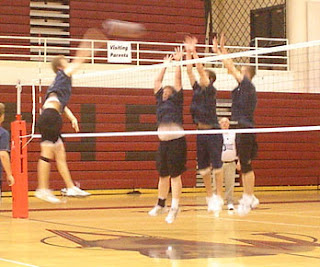 And that pretty much sums up my brother's life. He wakes up at 4 am to play volleyball, everyday! That's dedication! And then he plays games until 10 pm! (Also dedication). He loves it though, and he's good so, as Andrew and I say, "If it feels good, and you don't lose the Spirit, do it!"
Posted by Nancy at 12:18 AM