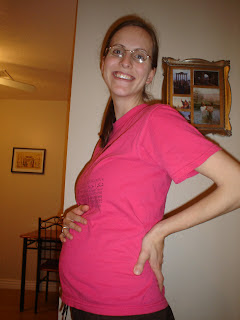 (we actually took it on the 22nd late at night because Andrew had to work tonight)
There really is no denying it now--that is a pregnancy belly. It used to be kind of flattering when people would say, "Oh, I just can't believe you're pregnant!" I even had a hard time believing it at first myself. I wasn't really sick. I didn't gain a whole bunch of weight to start out with. I wasn't really showing...at all.

Now when people say, "You don't look pregnant at all!" I kind of give them a quizzical look. Really, is that how people thought I looked before I was pregnant? Come on, people!

Granted, I don't look as big as some other girls in the ward who are about as far along as I am. But to say I don't look pregnant at all? That's kind of a stretch. 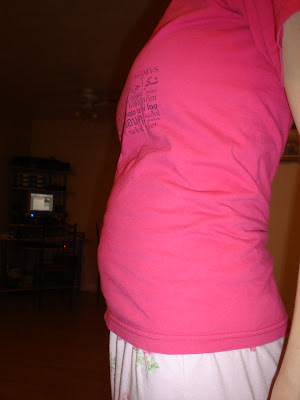 That is a whole lot bigger. And I assure you, baby is bigger, too! She can reach my ribs now which is interesting, especially late at night when I'm lying on my side and she commences to repetitively bounce up and down on my rib cage. I actually don't know what her new fascination is with my rib cage because she should have been able to reach it quite awhile ago--but she really just likes to kick the bottom of my ribs over and over and over and over... It's like she's jogging or something.

She actually moves a whole lot more than she ever used to, especially during the day. At work today I had to move some things, so I was kind of working up a sweat running up and down ladders carrying boxes (not heavy boxes--don't worry). As soon as I got back to my desk, baby Rachel had her own exercise session. I think that when I exercise it gives her energy to move around a bit more.

She had another little "daytime movement session" during dinner. I had walked to my friend's house, just sat down, and then we headed out the door for dinner. Not ten minutes after we were seated at our table, Rachel started up again.

I'm seeing a pattern, because that's exactly what she did at yoga a few weeks ago, too.

We'll have to see if she still has energy to do a big kicking spree tonight or if she tuckered herself out with all her movements during the day.
Posted by Nancy at 10:24 PM