You can call me flower...

We had a Visiting Teaching Seminar today. There were three things that I was supposed to remember to do for this, but when they left all those cute little reminders on my door not one of them had a checklist, so I think I did pretty good.

I had to: 1) get together a musical number, 2) make a hat (explanation to follow), and 3) a silk flower that "represents me."

1) The musical number was a tough one, but I got it together...yesterday. See, I had it all arranged earlier but then no one really showed up to practice and then Maria lost her voice so she couldn't do it, so I got Bonnie to do it, but then she caught a cold so she lost her voice as well.

Yesterday we practiced at Emi's house and she switched roles with Bonnie, so Bonnie ended up playing the piano while Emi sang. But Emi's an alto which means that I switched from alto to soprano. I had already switched from soprano to alto so that Maria could sing soprano because she can't read music, but she wasn't there so it didn't matter.

Anyway, we practiced yesterday and it was great. We're all choir-ish people so it sounded nicely and we blended well. Everyone showed up tonight, and we even made a few ladies cry. I'm not saying that that is a grand accomplishment in a Relief Society meeting. I am merely stating the facts.

This thing was thrown together at the last minute so much so that the girls were afraid to learn the song. It's four pages long, with a repeat. I told them that we're all musically talented and it's by Janice Kapp Perry so it sounds great without being too difficult. We'd be able to pull it off. (We sang "When I feel His Love," in case you were wondering). However, I totally remembered singing it last year in my other ward with just one piece of paper front and back, so two pages total. I knew that I had that somewhere and it would obviously have been easier to learn than the four page version.

I found it last night at around 11 o'clock.

We sang the longer version. It was great.

2) The hat is a longer story, so I'll just link to the story. Our whole theme was "Hats off to Visiting Teaching." I have an inkling of an idea that they stole the idea from a website since it was word for word what we did. I was "First of the Month Flora," which is probably about as opposite as you can get! It was fun, but to prove how not first-of-the-month-ish I am, I will admit that after coming home from work tonight I sewed some of my old first place ribbons onto a touque. If that's not last minute, I'm not sure what is.
So silly! 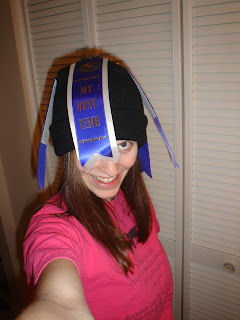 At least I didn't have to memorize any lines. All I had to do was show up and walk around.

3) The silk flower should have been the easiest thing. I have one that is just sitting around the house. I was going to bring that one...because I really couldn't think of a flower that really represented me. I mean, how do you do that? It's like one of those really odd questions like, "If you could be any fruit in the world, what would you be and why?" So I figured that since we didn't have to explain the why part to everyone that I'd just take the one I have lying around my house for absolutely no reason.

But apparently that wasn't on my mind and I forgot.

Lucky for me, Sis. Hoag brought some extra flowers so I got to be a nice pretty white stalky thing with a pink tint in the center of each flower. I have no idea what it was...but at least I was represented! I suppose right now that really does represent me: I need someone to remind me of everything I have to do, otherwise I'll forget!
Posted by Nancy at 10:56 PM