Getting ready for baby

On Thursday afternoon, Andrew's mom, Karen took us to pick out a crib. We were really grateful for this offer since now we only have to get a crib mattress!

We chose a nice crib with a dresser/change table combo attached to it. It can also be made into a full sized bed, so we hope that it will last our family a long time.

The instructions looked easy enough, so we dove in. First we assembled the dresser drawers. This is when I realized that although all the parts were labeled in the instructions none of the physical parts themselves were labeled. So, we spent about twenty minutes holding things at different angles, trying to figure out which piece was which.

I was grateful that they at least labeled the packages that all the screws were in. That would have been a lot less obvious than figuring out the parts of a crib.

After getting all the parts figured out, we assembled the drawers with little difficulty. 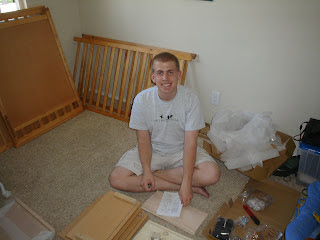 Andrew actually did most of that because he's just so much faster than me! I put the knobs on though, and made about 1/2 of one drawer.

Frankly, the very idea of making a crib was overwhelming me...this whole having-a-baby thing is getting more and more real every day! And then there were the instructions. Those were also pretty frustrating.

We were working on putting the mattress support bars together. I made sure to read the instructions completely. So I read them through from start (find the bars) to finish (tighten the screws). It looked complete to me. We went ahead and put it together...

And then I turned the page so we could work on the next part of the crib.

There in bright red letters was a warning, "Before you tighten the screws, be sure to..." I swear I almost tore out some of my hair. That was the only thing they left off the other page. A 2 sentence warning that should have come before the last step (which said to tighten the screws).

Well, that's how our whole afternoon went. Gotta love things translated in China. Don't they know that the best translations are done from a foreign language into your own language--not vise versa?

In the end it seems to have turned out alright. I suppose we won't really know for sure until we put the baby in it. If it falls apart in the middle of the night we'll know that we put part (p) where part (q) was supposed to go...or that we were supposed to use some of those extra parts that we assumed were for converting the crib into a bed. 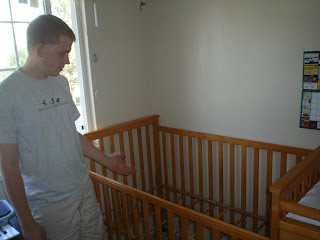 I like how I look prouder of the crib, even though Andrew did most of the work. 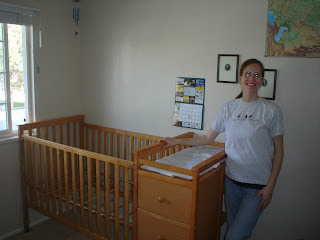 My very favorite part about getting a crib, though, is Andrew. We were getting ready for bed late Thursday evening. I was brushing my teeth when Andrew disappeared. After awhile I went in search of him. I checked all the rooms we normally use: kitchen, living room, bedroom...but Andrew wasn't in any of those rooms. I walked into the baby's room and there's my husband, running his hands across the bars of the crib and staring into it lovingly.

"What are you doing?" I asked, with toothpaste foaming out of my mouth.

It was really cute.

He actually likes to spend a lot of time in the baby's room. Today (which is actually Saturday) while I was preparing a salad for our family party, I went to check on Andrew (I have a habit of that...I can't help it. He's so cute!) and found him, once again, in the baby's room. This time he was practicing the piano...on the baby's bassinet. 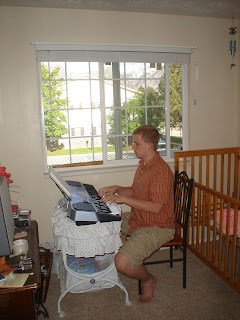