Spring Time in the Rockies

One day we were outside playing and somehow our attention turned to the flowers. Josie decided that she would smell one, so she walked up to the flower, put her nose right in it and sniffed a big sniff.

"Ew!" she exclaimed, "These flowers smell like dead people!"

And then when you go home there are flowers all over the living room, spilling over into the kitchen and hallways and bedrooms...flowers are just everywhere.

Most flowers do smell pretty good. Others, however, simply don't. We have these trees by our walkway that just smell awful. They provide our living room with shade and since we live on the second floor, we are right in the blossoms. I suppose it is kind of like being in a tree house. 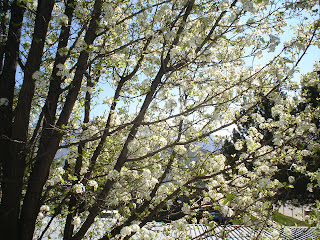 Unfortunately, when the breeze blows through our open window, we don't get that nice, fresh apple blossom smell. Instead it is this grossness. I really wish there was some way to capture a smell and just kind of clip it to this post so that you would know what it smells like.

Josie and I walked to Patrick's volleyball game earlier this week, and these trees were lining the streets. Josie, now knowing that flowers don't smell like dead people, said, "Gross! These smlowers fell bad!" Fortunately the trees on the street alternate between these ones and some plum trees. Even though plum trees are messy, they certainly smell a whole lot better than this kind!

I told Andrew the next day that the blossoms smelled bad. He was suffering from allergies and was still quite stuffed up, having taken his allergy medicine just before we left the house. He insisted that they smelled just fine.

Well, when we came home from work (after his allergy medicine kicked in), he agreed with me that they smelled horrible. We were trying to decide on something to compare the smell to, but couldn't come up with anything until Andrew said, "You know, they kind of smell like dead people."

Now, that is kind of true. They have that sweet flower smell mixed with the smell of rotting something or other. How morbid is that?

At least these trees attract birds. It's kind of nice to wake up to chirping birds outside our window. We always sleep with our windows cracked open to help air out our house (although I'm not sure it counts as "airing out" when it ends up smelling like dead people).

This will be our first summer here together. It's rather nice to hear birds in the morning instead of gas trucks blaring ridiculous Nintendo theme songs, or goat herders yelling at their bleating goats. Come to think of it, I don't think I once heard a bird chirping outside my window in Jordan, so it's kind of a nice change of pace, although I do miss Jordan terribly.

I'm just glad that winter is finally over and we don't have to wear shoes or pants anymore!
Posted by Nancy at 12:31 PM