I'm glad that I can never be a Stake President. And perhaps if Andrew goofs off enough in Elders Quorum, I won't have to worry about being a Stake President's wife, either. It would just make life rather busy. I mean, today I went to our ward from 11-12:30, to 2nd ward's conference from 1-4, had a meeting with the Stake Presidency from 7-8, and a meeting with the Primary Presidency from 8-9:30--and that was pretty short, believe me. We've been known to carry on until 10:30 or 11:00 at night!

It's exhausting, really...but I can't even imagine everything that the Stake President does. I mean, I'm done with busy Sundays until June when we have another ward conference, but the Stake President has meetings all the time with everyone. I'm not really sure how anyone does it.

Anyway, Andrew and I worked uber-hard last week to bank our hours for this week so that we could take time off work and relax. We were planning on going to Grover with his family for a while to get some camping out of the way before I'm so big I have to waddle around.

Unfortunately, we instead dealt with some family issues and ended up staying put. I won't say that I'm not disappointed, because I am... I suppose Andrew and I still could have gone to Grover, but it just wouldn't have been the same. After all, neither of us has hiked Sulfur Creek, and I wasn't about to do Calf Creek being 28 weeks pregnant.

We had great plans for everything we were going to do this weekend. We did accomplish a lot of sleeping in, but we didn't actually do any hiking or anything. We had planned a nice picnic up in Provo Canyon--perhaps recreating our first date, so very long ago.

Things got busy though, and we ended up picnic-ing on BYU campus while running some finals back after Andrew finished grading them. It was still fun, but I wish we could have spent a little more time doing some fun things together. Oh, well... 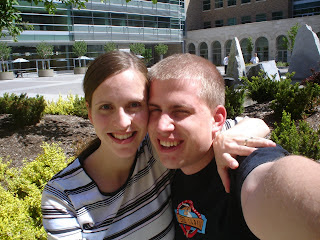 We had a nice, quiet (but relatively quick) picnic by the fountains at the JFSB, complete with Jell-o cut into little cubes (that we made at midnight the night before). 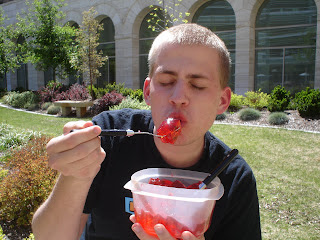 Perhaps we'll try for another relaxing weekend later on in the summer...not during graduation, somewhere out of town, and before the baby comes. We'll see if and how that works out.
Posted by Nancy at 12:14 AM