Yesterday was a very productive day. Granted, we didn't get done some of the things we had planned to, but we did get quite a few things done.

Andrew's mom came over to help us put in a few extra shelves, meaning that Andrew got a few of "life's lessons on power tools." He stripped two drill bits--not the screws, but the actual drill bits. After that he pretty much got the hang of it.

We put a shelf in our front closet and in the baby's room. Those two shelves alone have given us so much more room. It's quite amazing, actually. I feel a lot more organized now.

Andrew working on the front closet 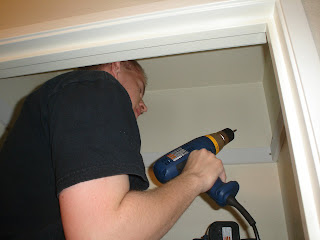 And on the baby's closet 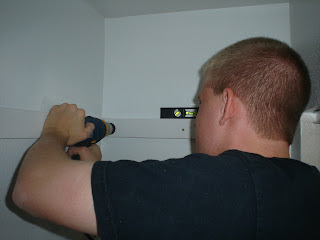 I must say Karen was quite helpful. After all, she taught Andrew how to find studs, which way to turn the screws (righty tighty, Andrew), and she cut the wood for us. I, on the other hand, was a little less helpful. I did laundry, took some pictures, made fun of Andrew, held the wood while Karen cut it (once), and handed Andrew some tools. 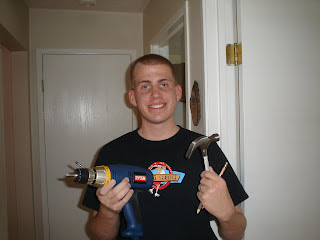 I also made a shopping list. So, when we were finished with the shelves, we went grocery shopping. We also stopped by ShopKo to pick up a "glider." They were 1/2 off the original price, so we figured we may as well grab up the offer while we could. We purchased the chair and then held up the line for a million years while the "out-bound" guy showed up with our chair. He helped us wheel it out to our car and then we spent the next 15 minutes trying to figure out how to get it into our car. It was in a box that was too big to fit in any of our car doors and also wouldn't fit in our trunk. Finally we ended up opening the box and putting the chair, piece by piece into our car. Even then we couldn't close our trunk.

I think I understand why people use trucks to move things now.

After dropping off our chair, we went grocery shopping. We had a whole bunch of coupons for Costco (like $5 off baby wipes, and great things like that), so we went there and spent more than we probably should have...but got a lot of our food storage done! And it really was cheaper than buying things at a regular store for a regular price. About $10 for 832 wipes...that's pretty good (at Albertson's, it's $5.79 for 240, just to give you an idea of how expensive they typically are).

"What do you think 'money' is?" I asked him, since money is also typically silly little pieces of paper.

"Well," he said, "these were just regular pieces of paper that they gave us. That's almost like robbing them blind. They give us the paper, we give it back to them, and they let us keep $45!"

I see his point, coupons can be pretty cool sometimes...

When we got home I started putting the groceries away while my Mr. Handy Man started assembling the rocking chair. I only had to help him a few times...he did most of it by himself. It looks nice, and is just as comfortable. It reclines, it came with an ottoman, it rocks. Could life get better?

Yes, it can. My husband then swept and mopped the floor for me (while I was relaxing...he's just too nice!). Unfortunately, he mopped himself into a corner. Luckily, I had my camera and caught him in the act of crawling out of the kitchen, balancing on his elbows and knees so he wouldn't leave any prints on the floor. I thought that was the most hilarious thing I had ever seen him do in my whole entire life... 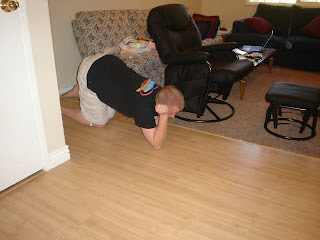 That is, until he sat down in the rocking chair and told me that I had to share because it wasn't just the "mommy chair." Oh, no, it's the "holding/feeding baby chair," which means that he has equal dibs on it. We're planning on breastfeeding, so I asked him how he planned to feed the baby.

"We can give her a bottle sometimes," he said, and then made the following hand gesture: 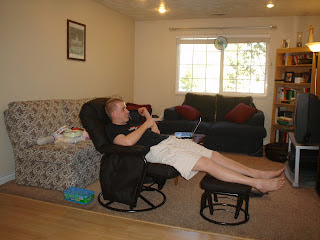 I'm not really sure what he's doing, but it certainly looks like he's playing the violin. Apparently one hand is holding the baby and the other is holding the bottle. I'm not sure which is doing which job, or what his arm is doing sticking up in the air, but I'm sure he'll get the hang of it once she's here.

The funny part is that I tried to take his picture while he was in his "original" pose...but he noticed and quickly moved, telling me there was no way he was going to repeat that for the camera. But then, I asked him to explain how that hand position equaled "feeding baby" so he did it again while he explained to me the reasoning behind the position. I don't remember what it was...I think I was laughing too hard.
Posted by Nancy at 12:45 PM