We went to the Cathedral of the Madeline today--it was part of one of Andrew's assignments. We rode trax from Sandy into the city center, but got off at the transfer station instead of the Temple Square station so we had to walk for forever. It was such a nice day though. I was fine in my sweater, and Andrew even took his jacket off and went around in short sleeves. He had to leave his jacket on in the train because he was wearing a BYU shirt and there was a U of U game today and we didn't want to be shunned.

Before we went into the cathedral, we tried to find a place to change Rachel's diaper. There is a little cove down on one side of the cathedral and we decided to change her there in privacy...but then I noticed a pillow and blanket and other homely devices. I was a little wary to just walk into some vagrant's home and change my baby but decided that she deserved some privacy, so I stooped down and spread open her mat. That's when I smelled that lovely bathroom smell and noticed that the wall not too far from us was apparently the bathroom of the makeshift living quarters. We changed Rachel on the sidewalk. It was okay. 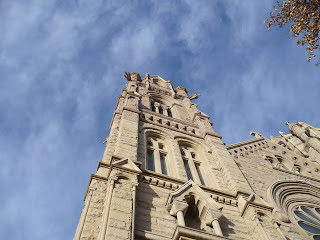 Inside the cathedral we felt a little out of place. First of all, everything was in English, which was a little odd because I've only ever been to cathedrals in Europe where nothing was ever in English. I was like, "Hey, I can read that!" but before I got so excited that I told anybody I realized that I was only reading English. That quickly damped my whole enthusiasm about my reading capabilities.

Secondly, confessionals are scheduled between 4 and 5 pm on Saturdays. Guess what time we were at the cathedral? There was a whole line of people standing outside the confessional. It started with two but then just grew and grew and grew until there were probably about twenty people just standing in a line.

Needless to say, that made it awkward to walk around the cathedral and take notes. It made it well nigh impossible to take any pictures, which is why we don't have any interior pictures. And it made me very self-conscious of Rachel who has recently started making dinosaur noises almost incessantly. With those beautiful vaulted ceilings, the smallest noise is magnified fifty times, so even her smallest dinosaur noise was unbearable, at least for me. She actually was in such a state of awe that she hardly made any sound at all. She kept craning her neck back to look at the ceilings, the stained glass, the organ. In fact, she was so quiet I think she was better behaved in the cathedral than she is during sacrament meeting. Of course, we were only inside for about fifteen minutes and there was a lot to look at...

After feeling uncomfortable for so long, we decided to leave the cathedral. I wish we would have taken the time to look at a schedule before we left because I really like to take my time in cathedrals. I just feel silly acting like a tourist when the majority of the people there are for serious worship. So, we headed out to Temple Square. 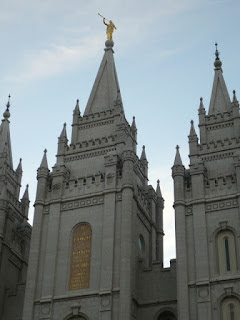 Rachel was so funny. She couldn't stop looking up. I'm not sure if she was looking at the sky or the buildings, but she was very focused upwards the whole time we were out. 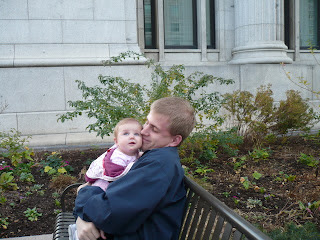 She was very excited to see the Salt Lake Temple. 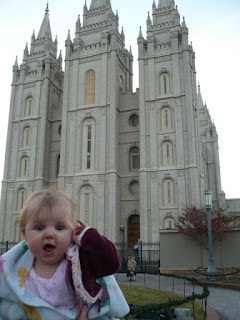 (she's doing her dinosaur noise in this picture)

We took a picture of Andrew and Rachel on the little pedestal they have for brides and grooms to stand on. We think it would be funny if she got married at the Salt Lake Temple--then we could recreate the picture. Unfortunately, it didn't turn out very well...I forgot to turn the flash on for most of these pictures. 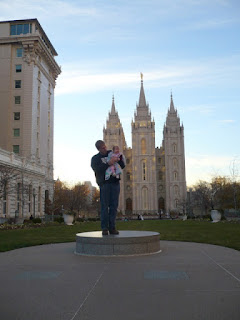 And then we just did the normal things you do on Temple Square, like trying to see the newly refurbished Tabernacle (there was a concert going on so we couldn't) and touring around the Visitor's Center. 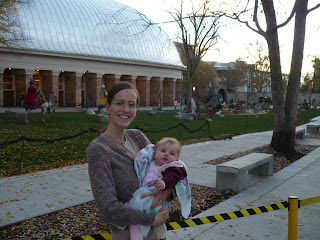 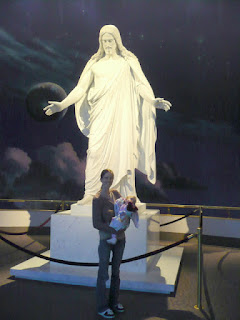 We then walked to the nearest Trax station. The train pulled up while we were still walking. We were across the street and the light was not in our favor.

"C'mon, we can make it!" said Andrew and he took off running, stroller, Rachel and all. I had no choice but to follow.

We darted across the street, clearly disobeying the crossing sign and ran to the train. I pushed the button to open the wagon door just as the conductor rang the warning bell and Andrew grabbed the stroller and tried to walk onto the train. He didn't see, however, that there was a handrail in the middle of the stairs, so he ended up awkwardly trying to haul the stroller up on one side of the handrail while standing on the opposite side after almost capsizing. I helped him and the stroller up while we were both killing ourselves with laughter.

Luckily the train was fairly empty so very few people saw Andrew jam the stroller into the handrail. Nor were there many to fume at us for holding up the train for a few more minutes. And the train didn't squash us in its doors (had this been in Russia...). And we didn't get hit by any cars while sprinting across the street.

Next time Andrew wants to take risks like that, I think he should do it without the baby.
Posted by Nancy at 11:26 PM