When my Grandpa Conrad was dying, the nurses told my grandma some of the ways she could tell when his time was coming. One of those ways was to watch for purple coloration in his legs. The legs tend to loose circulation first, so they will turn purple as circulation worsens. The nurse said that when his legs were purple up to his knees it would only be a matter of months, maybe even days, until he died.

Sure enough, that's what happened. As morbid as this sounds, when my grandma started dying a few years later, she'd watch the purple creep up her own legs and knew that death was approaching.

Soon Grandpa Layton will be leaving us, too. His legs are turning purple and he is always disoriented. We went to my grandparents' house for dinner this evening because we really aren't sure how much longer he's going to last. Well, that and we wanted to have a good time with them. 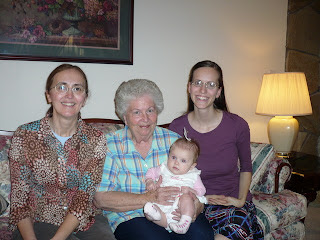 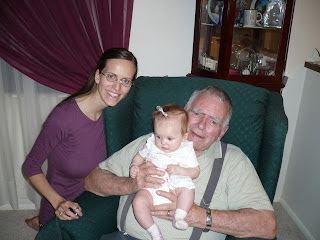 Kelli was also there with her girls. The twins were pretty sick, so Olivia slept the whole time we were there and Sabrina was fairly low-key, herself, although still quite a handful! 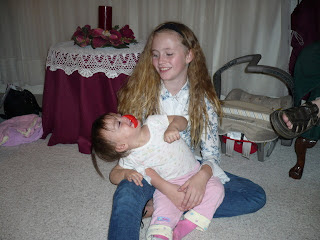 Kelli's fiance, David, was also there. He is really nice. They are planning on getting married in February next year. He has five kids of his own, so between the two of them, they'll have 10 kids! Further, David's oldest daughter recently had her first child so Kelli will be a grandma and I'll be a great aunt.

But, he is so good to her and her kids. He always helps clean up from dinner and does whatever he's asked and he is so kind to her babies and watches them dutifully. They already call him "Dada." Let's see, what else do I know about him?

He's a mechanic, I think. And his last name is Haggard. He'll be even more haggard after he adopts the twins and becomes their full-time dad! Kelli has known him for about 10 years now.

We tried to get a nice family picture of them, but Sabrina was kind of goofing off. She wouldn't sit still for anyone.

David with Sabrina on lap, Rosie, Kelli with Olivia on lap 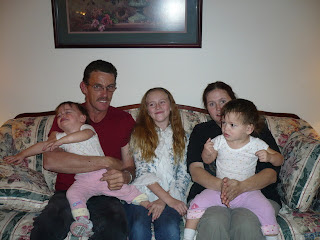 David, Rosie, Kelli with Sabrina and Olivia on lap 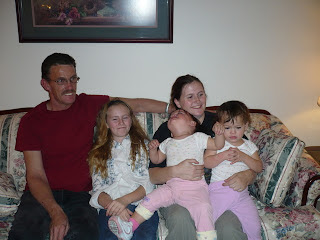