The Day After Thanksgiving

Temple Square is almost ready for Christmas. They have the nativity scenes all set up and have most of the lights up, just not turned on. I was teasing Andrew about it because he's so adamant that anything to do with Christmas can only take place after Thanksgiving: music, decorations, letter writing, gift buying, you name it. I think that's funny because I grew up with Thanksgiving happening in October so we didn't really have the strict demarcation between Thanksgiving and Christmas that so many people adhere to down here. 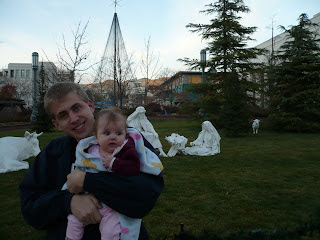 But apparently we're heathens. Andrew has been trying to convert me to become a follower of "The Day After Thanksgiving" tradition. To bible bash with him, so to speak, I kept pointing out all the decorations on Temple Square. None of them were turned on, sure, but there they were, in broad daylight--and who turns Christmas lights on during the day, anyway?

To tease me back, Andrew said that when we got home we could set up the Christmas tree. We could even put the lights on, but we couldn't turn it on because they hadn't done so on Temple Square yet. They are scheduled to do that the Friday after Thanksgiving at 5:00.

When we were walking out though, I noticed that not everyone got that memo. Poor Andrew had exposure to Christmas lights before the day after Thanksgiving.

The Pre-Lights at Temple Square 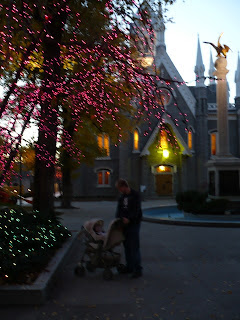 It is the day we set aside for huge shopping trips and setting up for Christmas. People treat it with such reverence that it ought to be declared a religious holiday with proper appellation, not something as repulsive as Black Friday. It reminds me of something I just can't think of what at the moment. I'm open to suggestions for a new name.

Now, I thought that Andrew was kidding about the whole tree thing. But he was not.

So we currently have a bare Christmas tree sitting in our living room, waiting for Thanksgiving to pass so that we can deck it out. It's kind of funny that Andrew took my teasings so seriously. I really, really only wanted to listen to Christmas music--I will admit that it is partly because he was so adamant about not listening to it--I didn't want to completely decorate for the holiday.

I suppose he's just trying to spite me for teasing him about his pious adherence to "The Day After Thanksgiving" rituals.
Posted by Nancy at 1:24 AM