We purchased Rachel a little potty. It's kind of an early Christmas present to her. Hopefully it will get here within the next few days. For now, I've been holding her over a bowl. Today didn't go so great, but we're just starting out--plus, Rachel has a little case of the runs from her shots, I think. 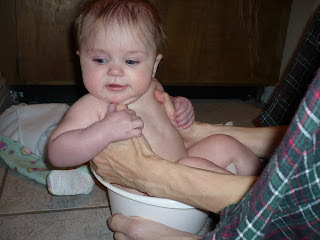 We only caught a little first-thing-in-the-morning pee, but she seemed happy doing it free of a diaper. 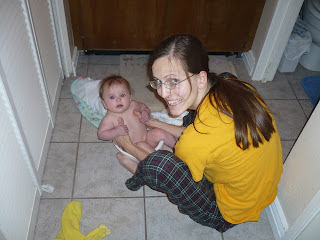 Holding her is a little awkward the way we're doing it, so I think I'm going to have to experiment with different holds. I tried holding her by her thighs this last time we tried to go (come questo), and that was a little easier for both of us, I think. Having the potty will be very nice, that's for sure. She'll be able to sit more comfortably and I'll be able to assist more comfortably. Balancing a bowl between your feet while holding up a fourteen pound infant is no trivial feat.

I know a lot of people don't agree with potty training children early, but really it's what they did before they had diapers and what they still do in countries where they don't do diapers. The one baby I held in Egypt was just a few weeks old and he was diaper free, which made me kind of nervous, but also made me wonder what exactly they did.

I'm determined to at least give it a shot. The whole idea is to start communicating with your baby about their "eliminations" from the very beginning and not just spring it on them when they're two. So, although I've had Rachel in diapers since birth, I have been trying to pay attention to the signals she gives before she goes and communicate with her about them. A lot of our communication goes like this:

We also try to pounce on her as soon as she's finished and get the diaper off so that she doesn't get used to sitting in her dirty diapers.

It just makes sense to me to have our baby learn to use the potty while she's young. No one I know is all that fond of diapers, anyway. So I've gone and joined a support group and we'll just keep trying, I guess.

Today we had a lot more bare bum time than ever before. A lot of that was spent with Rachel sitting on the potty-bowl and laughing at me. She thought I was rather silly today. Hopefully she'll get the hang of it soon though. 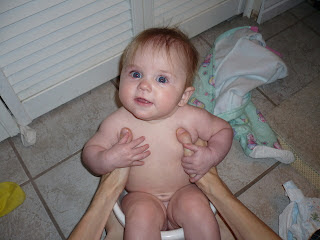