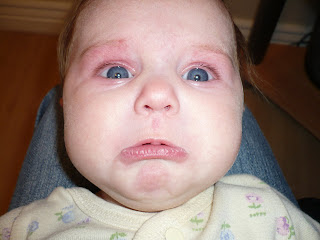 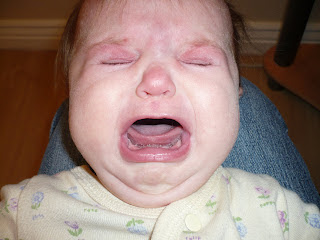 I've done it. I have captured the elusive pouty face.

We were going over animal noises. I would show her the animal, for example a horse, and say, "What do horses say? Horses say neigh."

"Rachel, what does a bear say? A bears says ROAR!"

Apparently I roared with too much gusto and she broke out her pouty face. Doesn't it just have "but mom" written all over it? Luckily I had the camera ready so, while I was telling her that everything was okay and that this bear isn't scary because he's just a toy, I quickly snapped a picture. And as if seeing the pouty face isn't enough to break my heart, three seconds later she starts doing her "how could you?" wail, complete with shaking hands and vibrato.

Mooing is apparently funny because I did the cow next and she stopped crying right away.

So, there's her pouty face for you. It isn't the best picture, but do keep in mind that the face only lasts for a few seconds. It's very hard to get it on "film."

Now that I've accomplished that, I need to catch her giggling. She now has a full-blow giddy schoolgirl laugh, but every time I try to film her doing it, she won't.

Josie was giving her zrbtts the other day and Rachel was just laughing away. I took out the camera and Rachel would smile all cute, but she would not make a sound.

Wouldn't you know it, she stopped her giggling and just stared at the camera wide-eyed.